“The Wasps” for the first time this season suffered their third defeat in a row going down 2-1 to Ayr United at Somerset Park, who had their goalkeeper Ross Doohan to thank for earning them all three points after he made a great save right at the end to deny a goalbound Liam Buchanan shot, so tight are the margins in this league.

The conditions were far from ideal as the game started with torrential rain and a swirling cutting wind blowing havoc. Ayr had the benefit in the first half and made good use of conditions, shooting on sight.

They went ahead after only six minutes, Alan Forrest’s cross headed towards goal by Ross Docherty, before the unfortunate Jon Robertson headed the ball in the other corner away from Jamie MacDonald. Six minutes later Ross Docherty again found fortunate in the fact he headed downwards into the ground and the ball bounced up high past Jamie MacDonald.

Again giving teams two goals of a start is not helping and “The Wasps” had to thank Jamie MacDonald who produced top drawer saves from Craig Moore & Stephen Kelly in a first half Alloa had to dig deep.

Manager Peter Grant was limited to options with Liam Dick serving the second of his two match suspension after being red carded against Inverness CT and Iain Flannigan was serving a one match suspension after a accumulation of yellow cards, Adam Brown returned to the bench after missing last 4 games after injury against Dunfermline Athletic, young Cameron O’Donnell made his first start for the club and did well in the first half, nearly scoring with a header just before half-time before Adam Brown was introduced for the second half.

The conditions improved in the second half and Alloa began to work their way back into the game with Kevin O’Hara looking dangerous. On 67 minutes he was to score his sixth goal of the season a long ball out of defence was headed down by Andy Graham then flicked on by Alan Trouten to Kevin O’Hara who thundered his shot high into the top corner of the net.

The players to their credit kept going and looked the more likely to score, their best opportunity came in the final minute when Robert Thomson battled well to get a cross into the box which fell ti Liam Buchanan, but his netbound effort was saved by at outstretched toe of keeper Ross Doohan to deny Alloa a share of the points.

Liam Buchanan is denied in final minute of game 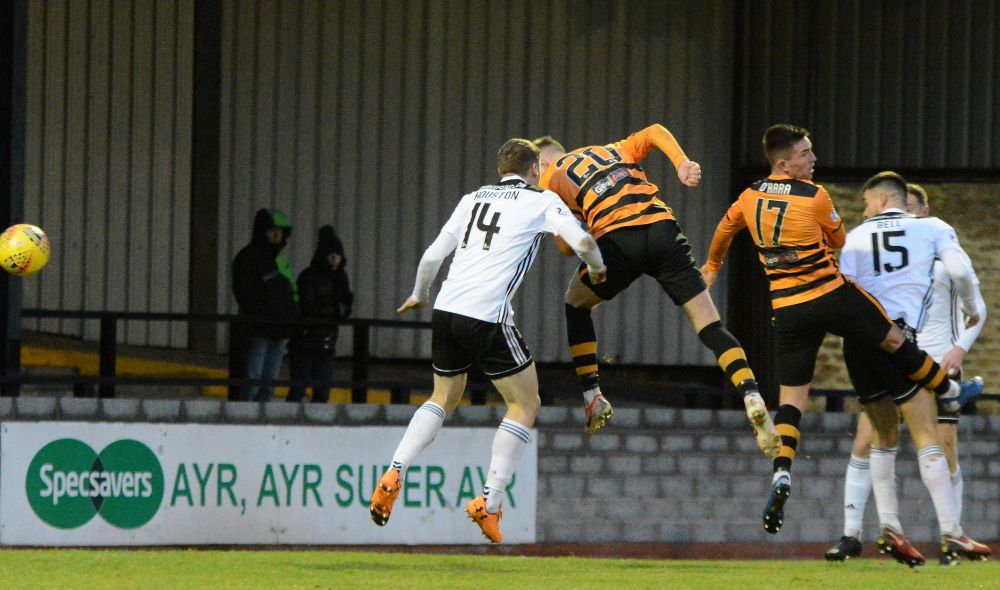 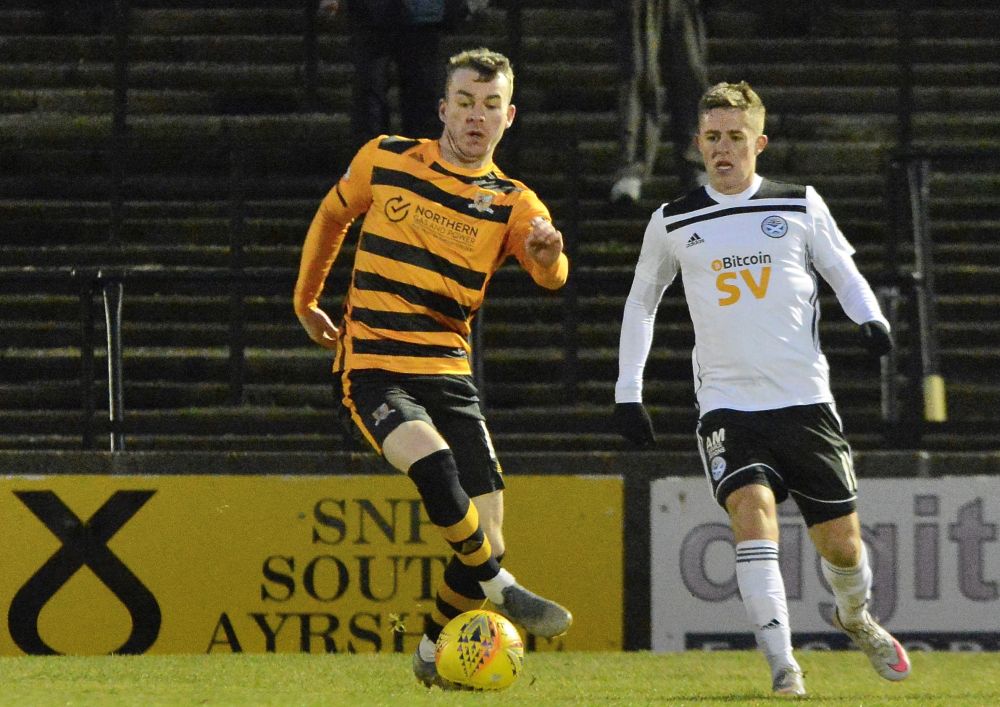 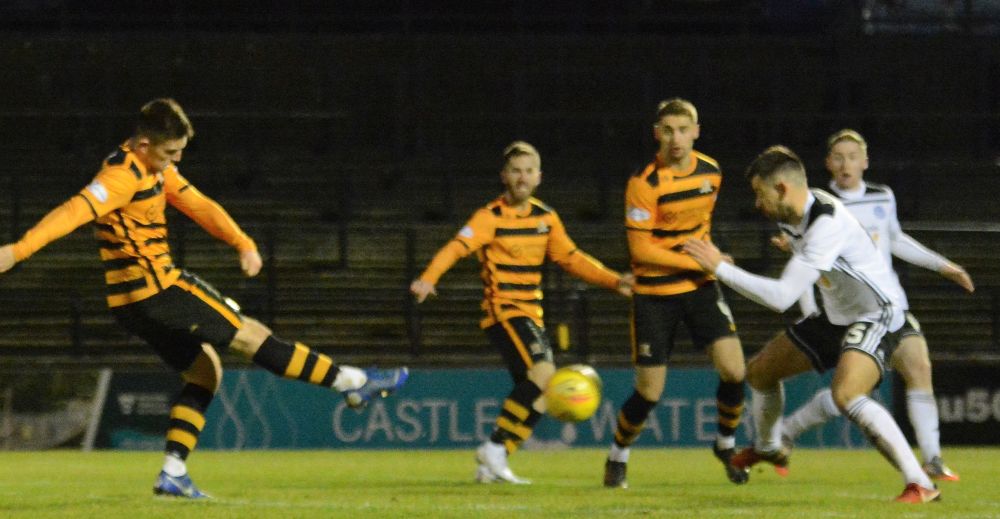 The two goals we lost today were very poor goals to lose and I know people can blame the conditions which were very difficult in the first half, but the way we play we try to keep the ball on the deck, but defending set plays in these conditions is more difficult. For the first goal we were slow getting out pressing the ball and at the second goal it was a mishit shot and the boy breaks in and gets a goal, we knew we would have to dig in and the conditions affected the first half,  I thought Ayr United deserved to be in front, because of the pressure they put us under but in the second half if we had scored with the chance right at the end, I think it would have been only fair had we scored, but that’s football when you are down and miss that chance and if there is anybody I wanted it to fall to it was Liam Buchanan or Alan Trouten, it was a great save, not a bad miss.

I do not look at Partick Thistle, even when they were at the bottom of the table, I said I thought they would be fine, they have the players and a full squad, they have two squads of players so I don’t see them having a problem, they are just needing a run of football and a bit of belief, for the rest of us we have guys going out on the pitch at times, who are unfit, that is one of the problems we have at this moment and having to play youngsters. Young Cammy O’Donnell came in from the start today and did very well, it was just a tactical switch at half-time, Adam Brown coming on after a period out through injury and because he has a wonderful strike on him, we also had a couple of suspensions but the one thing about my squad is they all want to play. Robbie Deas is on loan from Celtic and part of the deal is he had to play for them in midweek and he has a bit of a tight hamstring, so it is not easy, but the great credit I have to give to the players, is it is easy to throw the towel in when you are bottom of the league or say you are not fit but all these boys are desperate to play, so for that reason I was really disappointed to lose the game I thought we at least merited a point.

We stay positive in our approach but we realise you have a problem when you are not winning games of football, that’s the job we are paid to do – coaches, managers, players together, but I would also have liked to have come here and played rubbish and won, but that was not the case and I have a great belief in these guys, I know the way we can play and I know we will create chances and get opportunities but there is a long way to go in this season. I keep saying even in the last day of the season last year there were three different teams who could have went down on the day and that’s where we need to take it, but I would be more worried if we didn’t have the quality of player and hopefully we can bring in some guys to help over the Christmas period in the transfer window.

We need to start winning games but we also need to start taking the chances when they fall to us and can’t keep conceding the goals we have, simple goals which leave us chasing the games.