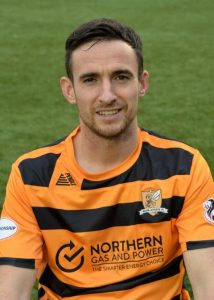 Player who returned to the club at start of season 2016/17, after a season with Dumbarton, not through sentiment but because of what he brings to the team and being such a good player, great energy with direct runs and eye for goal, now made 342 first team appearances and scored over 60 goals the sixth Alloa Athletic player to do so since the Second World War. Now entering his ninth season with “The Wasps” a hugely influential player in the team.