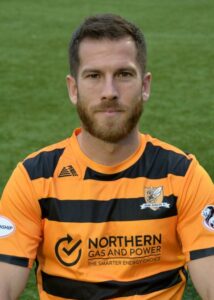 Liam rejoined “The Wasps” at the start of last season for a second time having had a succesful time with the club during Season 2014/15 when manager at the time Barry Smith signed him from East Fife. Liam had made his breakthrough at Cowdenbeath where his goalscoring attributes caught the eye, scoring 54 goals in only 133 league games, he then joined Partick Thistle at the start of 2007/08 where he was to on and score 30 goals in 84 games being top goalscorer in each of the seasons with “The Jags”, Liam then moved to Dunfermline Athletic and had spells with Sligo Rovers, Airdrie United, Ayr United and East Fife before his first spell with “The Wasps”. He returned to the club after a spell with Raith Rovers an continued from where he left off. Liam has already been on target in Pre Season friendly v. Stranraer in 3-1 victory.