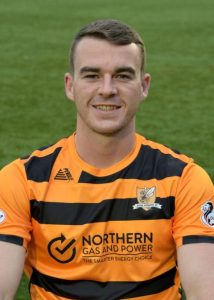 Adam was one of the Jim Goodwin’s first signings in May 2018, having impressed for Airdrieonians. Started his footballing career with Celtic Youths before short spell with St. Mirren. Twentyfive year old player who has a great engine and gets up and down the pitch. Adam scored his first competitive goal for the club with rocket shot into the top corner of the net, a goal which would have been fit to win any game against Dunfermline Athletic at East End Park last season. This season will be a big opportunity for Adam in midfield now Iain Flannigan has decided to retire and one he is desperate to grab.