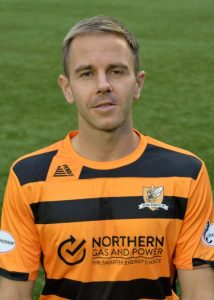 A player whom the club have tried to sign previously, but are delighted he has now joined them after such a succesful season last year with Albion Rovers where he scored over 30 goals and was named in PFA Scottish League One team of the year for season 2017/18 having already been included in 2014/15 & 2012/13. Now aged 34 on target with thirteen goals last season, arriving late into opposition penalty boxes not aware of his threat are doubling up to defend against his late runs into the box. Delighted to extend his deal with “The Wasps” having been target in close season of full time opposition.