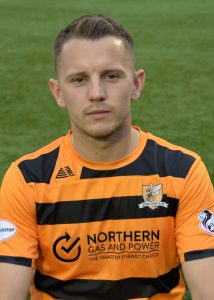 Has played the majority of his career in the Championship and is still only 28, he can play anywhere across the back four although predominately at right back, his versatility is a great attraction to the squad.

Scott set a remarkable achievement of playing 7,263 minutes of his Alloa career before he missed a single minute of play for the club, until having to go off through injury at Somerset Park v. Ayr United on 3rd February, 2018. After 92 consecutive games for the club, a record for an outfield player and only one short of goalkeeper Mark Cairns record for the club, Scott finally missed game against Forfar Athletic on 14th April, 2018 due to accumulation of bookings. Scott was named in PFA League One team of the Season for 2017/18. He made his 100th appearances for “The Wasps” in Betfred Cup match v. Dundee United at Tannadice, scoring in 4-3 penalty shot out victory on 24th July, 2018 and last season surpassed the 150th appearances for the club.