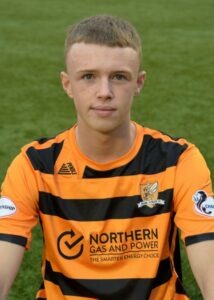 Cameron has progressed through the youth ranks at Alloa Athletic, made his competitive first team debut in Tunnock’s Caramel Wafer Cup tie against Inverness CT. and League debut v. Dundee and made first league start against Ayr United on 14th December, 2019 at Somerset Park. One of the younger players at the club who will look to gain more first team appearances having started well in pre season friendlies, scoring in 3-1 victory over Stranraer on 22nd September, 2020.