Saturday’s game was a good advert for the SPFL Championship with both teams looking to win the game in a crisp frostly afternoon with the scenic snow capping The Ochils in the background. Both teams opened briskly after a delay of fifteen minutes due to an accident holding up traffic on the road to the match.

The visitors took the lead after 29 minutes with Michael Moffat firing home with a bullet strike. Alloa recovered quickly and less than two minutes later were level when Alan Trouten scored his seventeenth goal of the season against one of his former teams.

Ayr United continued to have a lot of the ball in the first half but Alloa had good chances and looked dangerous. Into the second half Dario Zanatta was causing the Ayr defences problems but to be fair Aaron Muirhead was there to deny him blocking a shot off the line and then by a great last minute challenge.

Alloa were to fall behind when a long ball down the centre was missed by the Alloa defence and Neil Parry coming out from his goal brought Michael Moffat down, penalty. Lawrence Shankland back in the Ayr United side scored his 30th of the season.

The penalty changed the game at a time Alloa looked like they could get in front but were punished after losing such a poor goal. Credit to Jim Goodwin’s men who never know they are beaten and twice Ross Doohan proved just how good a goalkeeper he is, firstly saving from Jordan Kirkpatrick but then broke Alloa hearts with a better save from Iain Flannigan pushing the shot onto the crossbar and over.

Worse was to come with two minutes left Ayr United pressed the Alloa defence with no Alloa player taking the chance to clear the ball upfield or out of the park, the ball broke kindly to Michael Moffat who accepted the gift and fired the loose ball high into the net. It was a day to remember for Michael Moffat who scored twice, was brought down for one penalty and could certainly have had other late in the game, all on the day his wife had earlier given birth to his daughter, Mila. 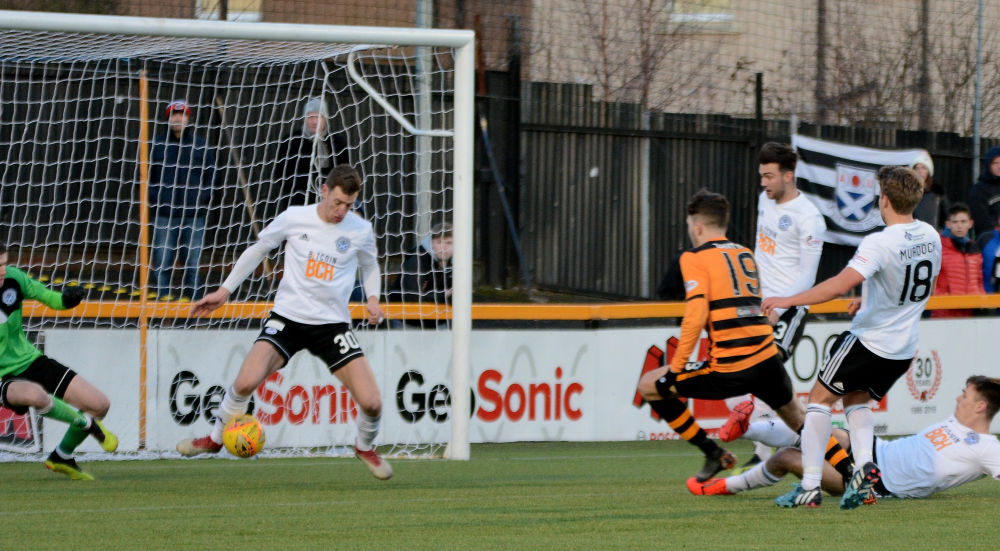 Aaron Muirhead clears off the line

Lawrence Shankland scores from the spot

Yes it is fair to say we are disappointed at the result, it won’t be any surprise to anyone when they read the paper and see the score line and it probably flatters Ayr a wee bit, it makes it look a little more comfortable than it actually was but it is that old cliché goals change games.

I was looking forward to the second half, I felt the draw at half-time was fair – they scored a decent goal and we scored a decent goal but the penalty was a sore one. I think we should have dealt with it better, the header should have just went back up the park, it was a stonewall penalty I would not argue with it. Then at 2-1 down we kept going kept trying to get back into the game, we know Ayr United are a very dangerous side on the counter attack and we worked on that during the week, their keeper but a great save tipping an effort onto the bar at 2-1 so there was fine margins but the third goal was amateurish.

It was late on in the game, it was a poor decision, we should have just tried to put the ball out of the park but we tried to play our way out of trouble and it ends up being a tap in for Michael Moffat. Three – one looks like a comfortable afternoon for Ayr United but I think anyone here would have recognised there wasn’t a great deal between the two teams.

Both Falkirk and Partick Thistle have been busy in the January transfer window and both have strengthened, I think between then they must have signed about twenty players, so yes they have had their cheque books out both of them and both of the teams desperate to stay in the league, but we always knew that was going to be the case, we knew once the window was opened the teams around us would strengthen and get better, our last two games have been against Ross County and Ayr United, Ross County are in first place in the Championship with Ayr United  in second as I said we are not expected to beat those teams but we always believe we can but unfortunately on this occasion that has not been the case, we haven’t surprised anyone with our results and we have three games coming – 9th February v. Falkirk (H), 16th February v. Partick Thistle (H) and 23rd February v. Queen of the South (A) which will be three massive games for us and hopefully we can get back to winning ways next week against Falkirk