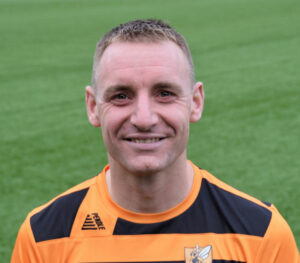 Signed at the start of season 2016/17 after scoring winning penalty in the play-off final for Ayr United against Peterhead, unfortunate not to gain back to back promotions with “The Wasps” in first season but made victory against ex club Dumbarton in the Play-Offs the following season all the more sweeter. . Vastly experienced defender who has been an inspirational captain at the club who swept the board at Supporters Player of the year awards at end of Season 2018/19. Last season made his 150th appearance for the club at East End Park Dunfermline Athletic before suffering a rare spinal infection, discitus which kept him sidelined for the second part of the season. Although still to feature in Pre Season friendlies is determined to be back in competitive action in the near future.