Ayr United produced one of the best 45 minutes of football that has been seen by any side at the Indodrill Stadium, after three straight wins in the SPFL Championship against Queen of the South, Partick Thistle and league leaders Dundee United, this was always going to be a tough game for Peter Grant’s side. Prior to the game Alloa Athletic suffered another blow with Alan Trouten being unfit to take his place in “The Wasps” line up.

Alan Forrest put the visitors ahead as early as the 10th minute from the penalty spot and when ex Wasp, Sam Roscoe who had been on loan last season at Alloa, rose to head in number two after only 13minutes in looked like a long way back.

Luke McCowan made it 3-0 after twenty minutes and Alan Forrest completed his double after 41 minutes to put “The Honest Men” well in control and it could have been more.

To Alloa’s credit they never gave in and the manager made two substitutions at the break to try and get back into the game and in fairness they worked with both Jon Robertson, who was involved in all Alloa’s best moves of the second period and Adam Brown who looked to get at the Ayr United defence.

“The Wasps” pulled a goal back just after the hour mark, Jon Robertson’s cross into the box caused Aaron Muirhead under pressure from Kevin O’Hara to get a goal back.

“The Wasps” needed  to get another goal shortly after getting their breakthrough but it was not to be. The game marked Stevie Hetherington’s 150th first team appearances for “The Wasps” but it will not be a game like any of the Alloa players they will want to look back at.

The Ayr fans in the crowd would have been pleased with the result and play but the headlines soon changed to the fact their manager was soon to be heading to take the Partick Thistle manager job. 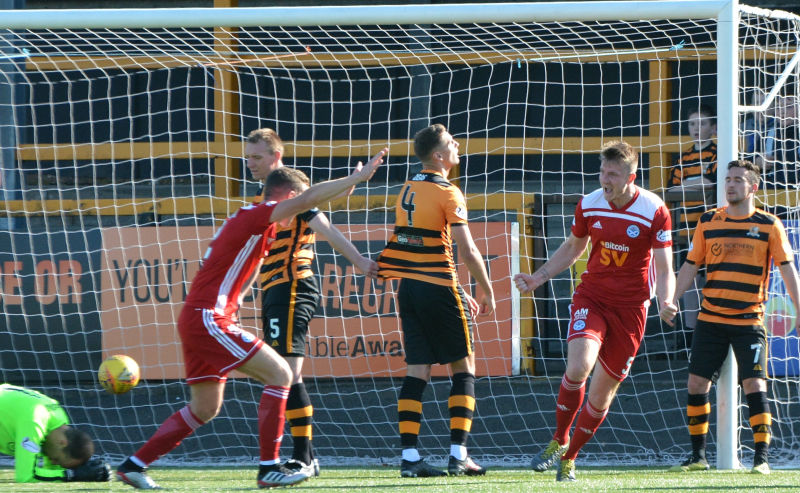 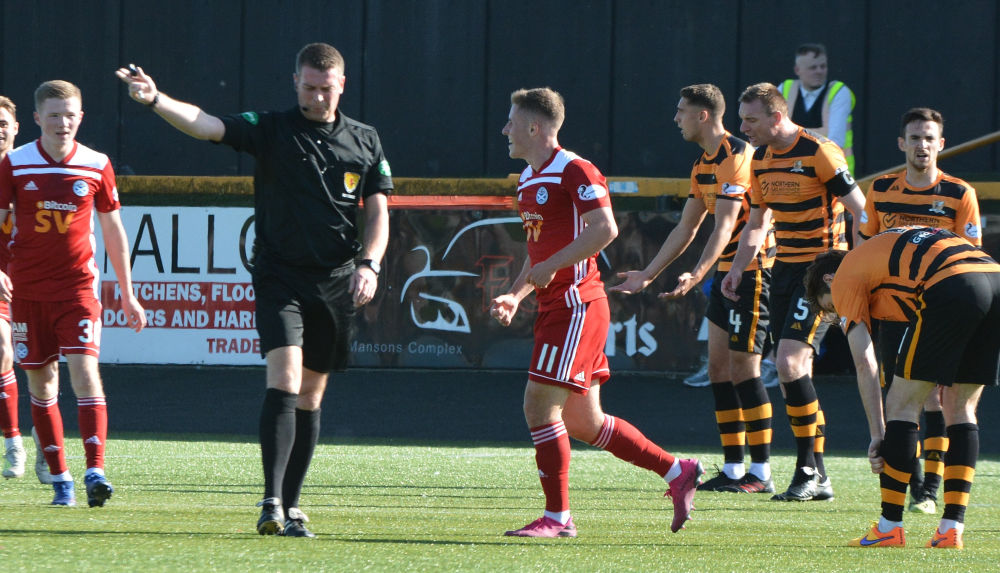 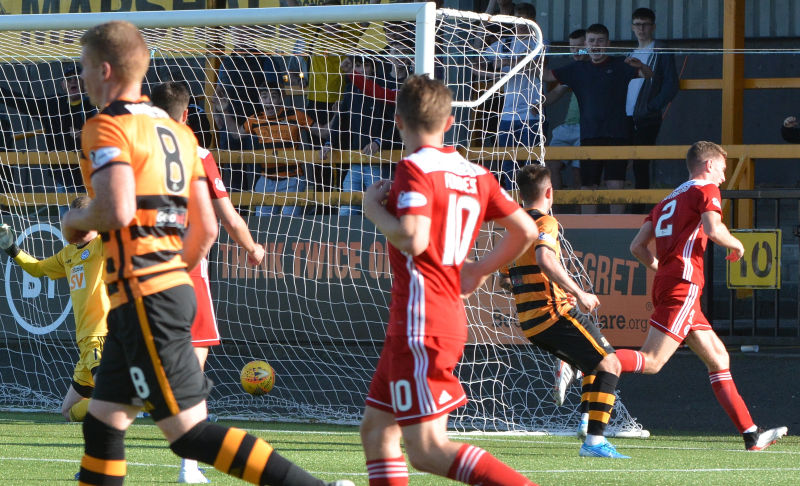 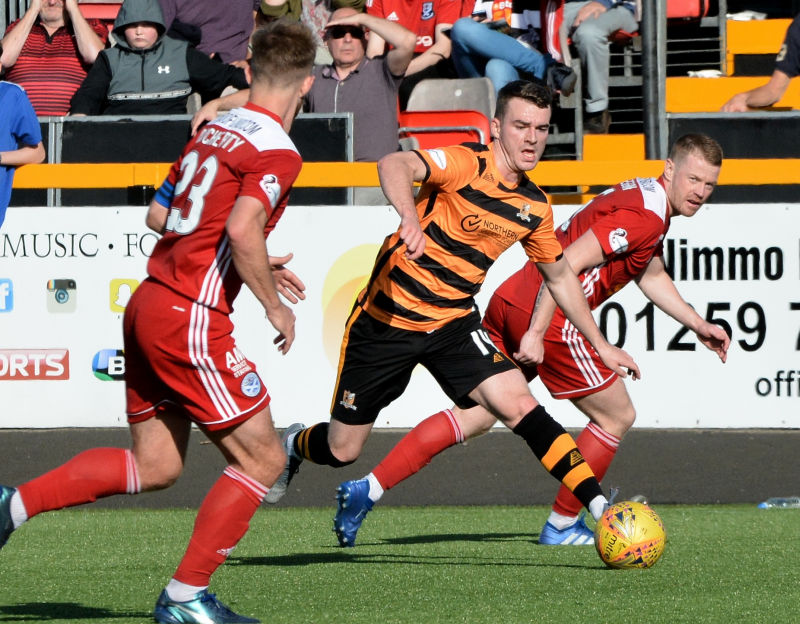 Adam Brown looking for openings on the left wing 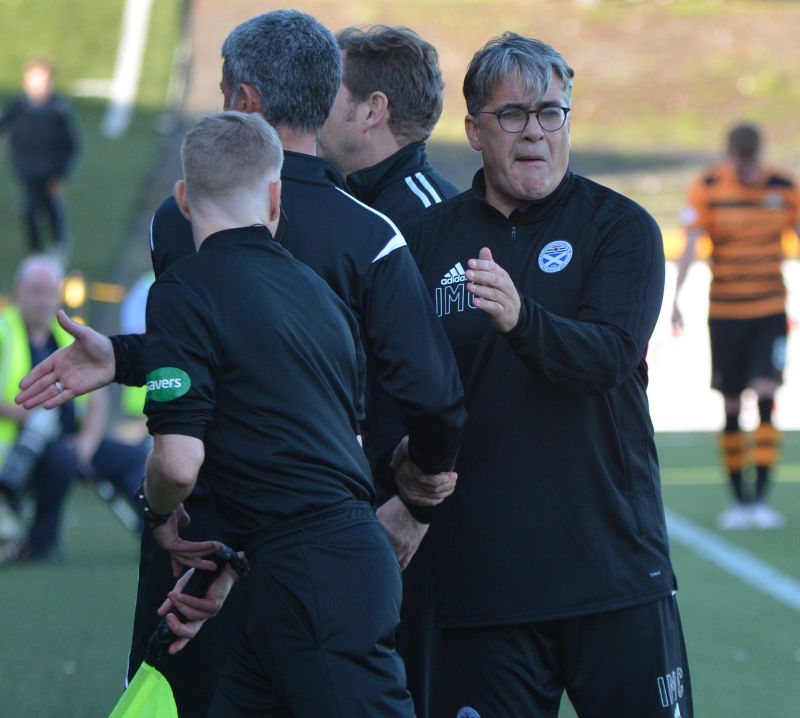 A terrible first half which I didn’t see coming, with this group of boys because they are a fantastic group of players. I said to them at half-time it doesn’t matter what level you are playing at you have to compete, we know we are a good football side but you have to compete, the last home game here against Arbroath was similar, I thought we were playing in a testimonial match, I thought Ayr United were very good, I thought we started the first ten minutes ok, but then after the roof caved in and it was damage limitation, to be perfectly honest there could have been more goals for Ayr United.

In the second half I had said to the players they needed to compete and look to win the second half, we did manage to score one goal but we needed another quickly after our goal to have an opportunity to really have a go at it. The players were hurting as I was at half-time watching it, I made a couple of changes, we had to do something to try and freshen it up. I thought changing the right back was the move that changed the game for us, I have left Jon Robertson out a few weeks and he showed the character that you need to try and win games of football, he was competitive, he set up about five or six goal opportunities including the one Kevin O’Hara scored, but all in all Ayr United thoroughly deserved their victory.

Losing Alan Trouten prior to the game was a blow, he hasn’t been feeling great this week and we hope it is only a viral infection he has, so that was a late blow to us but we have to try and adjust, the young players on the bench have earned their place the way they have played and earned that right, there are no excuses we didn’t deserve to win the game and it was nothing to do with anything else other than the guys on the pitch didn’t do enough in the first half, Ayr United won the first-half comfortably, we tried to win the second half but we needed that right from the start, my only concern is that is now the last two home games we haven’t competed especially the Arbroath game which was for the full game I felt and today was the first half, much better in the second half but Ayr United thoroughly deserved their victory.