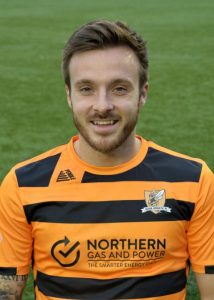 Steven started his career with home town club, Hartlepool United in 2006 before moving to Scotland joining Rangers in 2009 where he stayed for two seasons. He then moved to Motherwell, but was limited to only 3 first team starts. After a short loan spell with Airdrie United he returned south for a trial with Crystal Palace but to no avail, he then had spells with Celtic Nation and Crook Town, but returned back involved in Scottish Football when he joined “The Wasps” in July, 2014. A player who has shown his benefit to the team, especially with regular first team appearances, making his 150th first team appearance for “The Wasps” against Ayr United on 21st September, 2019.. Stevie has won “Player of the Year” award by Directors and is hugely influential player, even scoring direct from a corners in the past.