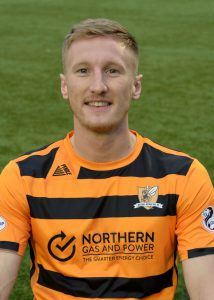 Twenty five year old defender who joined the club from Dumbarton after ending that season in the Play-Off final for Dumbarton against “The Wasps”. Liam began his footballing career with Falkirk making 29 first team appearances before going out on loan to Stranraer to gain regular first team football where he played for the next two and a half seasons before joining Dumbarton in January transfer window. One of the club’s unsung hero’s last season who has made the left back position his own.