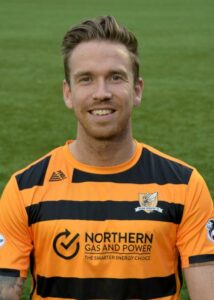 Another player who returned for a second spell at the club having had a succesful spell on loan from Dundee United at start of Season 2012/13. Born in Paisley, he began as a youth at Dundee United before going out on loan to gain first team football. He left Dundee United at end of 2012/13 season to move to East End Park with Dunfermline Athletic, he then had a spell with Brechin City and Dumbarton. Jim Duffy signed him for Greenock Morton but injury curtailed his success, having had surgery in last close season he rejoined “The Wasps” and looks to regain his goal scoring and be a different type of threat at six foot two.