Peter Grant’s side gained their first three points of the season after a 1-0 victory at Palmerston Park, Dumfries. This was everything we weren’t against Arbroath the previous week. Last season we had a great record against Queen of the South having collected 10 points out a possible 12.

The first half passed without either sides tested the goalkeepers, Alloa’s best opportunity was when Darren Brownlee appeared to pull Robert Thomson down in the box.

Queen’s best chance fell to prolific goalscorer Stephen Doobie who on this occasion fired over in a crowded box.

In the first half Alloa Athletic had showed great diligence and fight but always were looking for that chance to break on the home defence. It was important to get the first goal and in a counter attack Robert Thomson broke down the left wing and crossed for Alan Trouten to score such a landmark goal, not just the winning goal but Alloa athletic’s 1000’s landmark league goal of the 21st century.
It was a good team performance and showed again what we are capable of doing in this division, on our day we can beat anybody.

Indeed substitute Liam Buchanan could have scored with his first touch of the ball, Adam Brown playing back the pass for Liam Buchanan to shoot on goals only to be denied by a great save by Robbie McCrobbie.

It was a good team performance and showed what we are capable of doing moving up to 7th in the league. 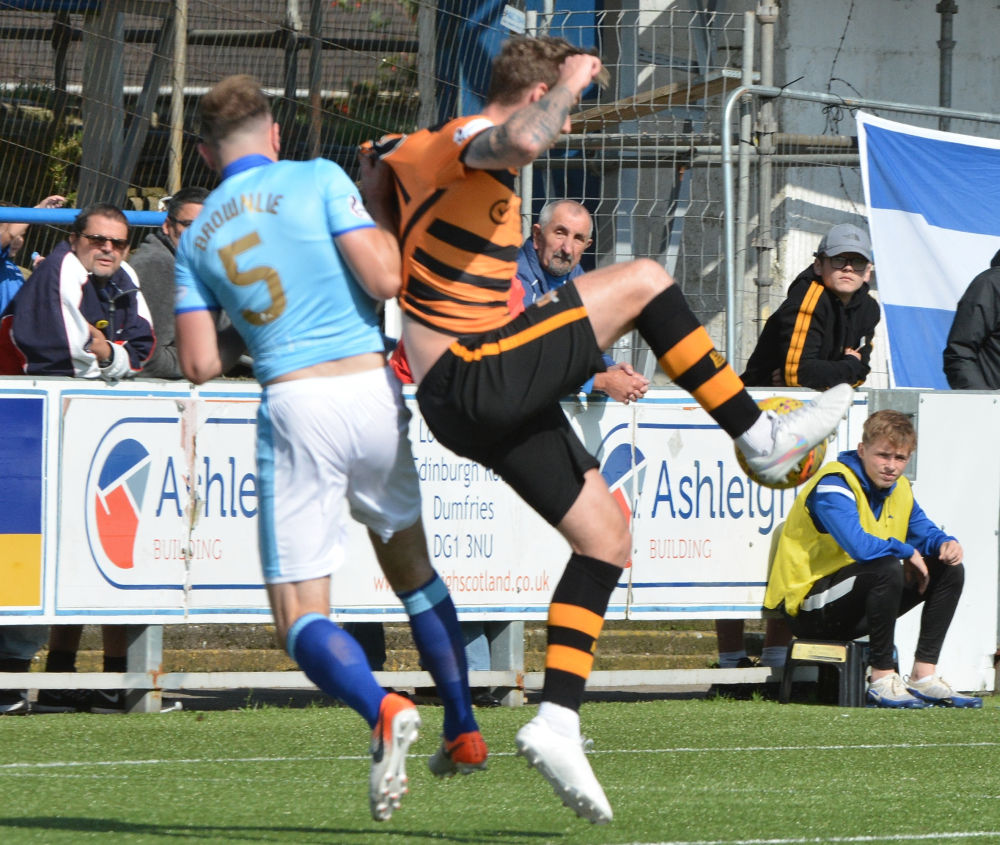 Robert Thomson appears to be fouled in the box. 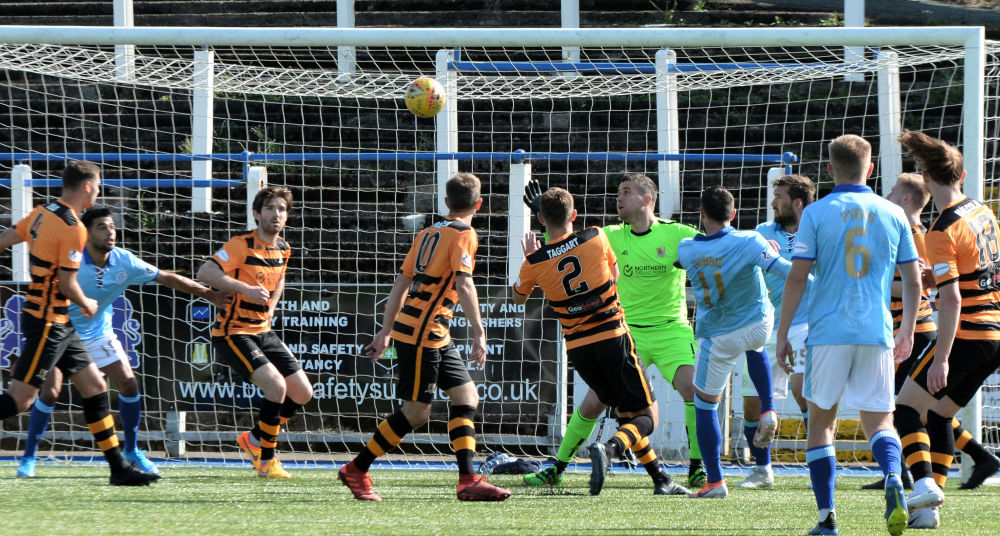 Stephen Dobbie fires over the bar 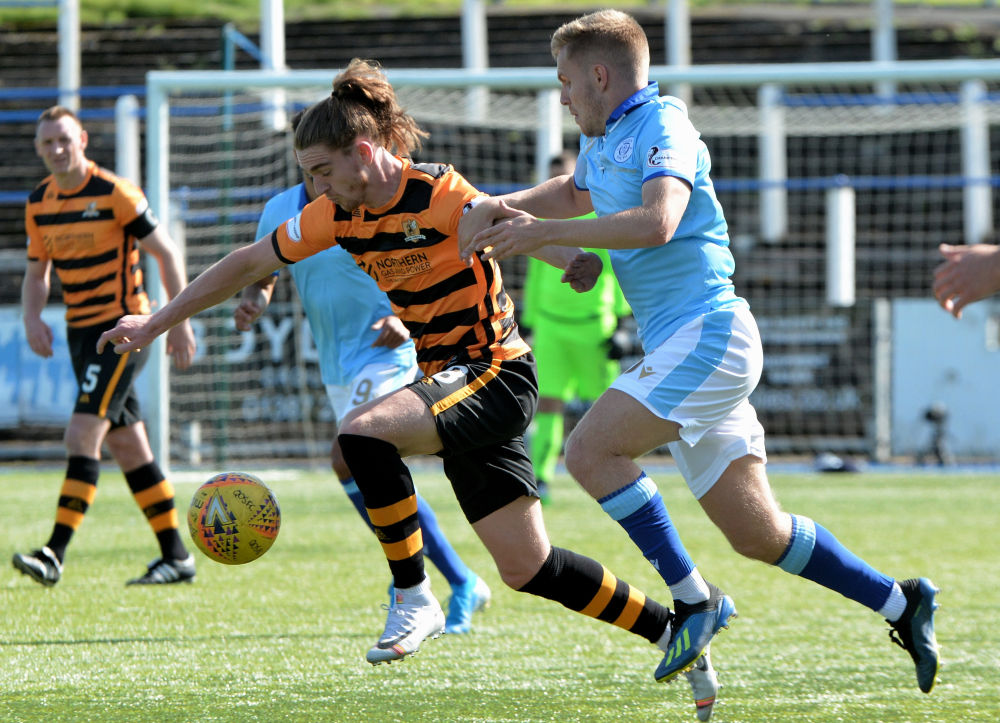 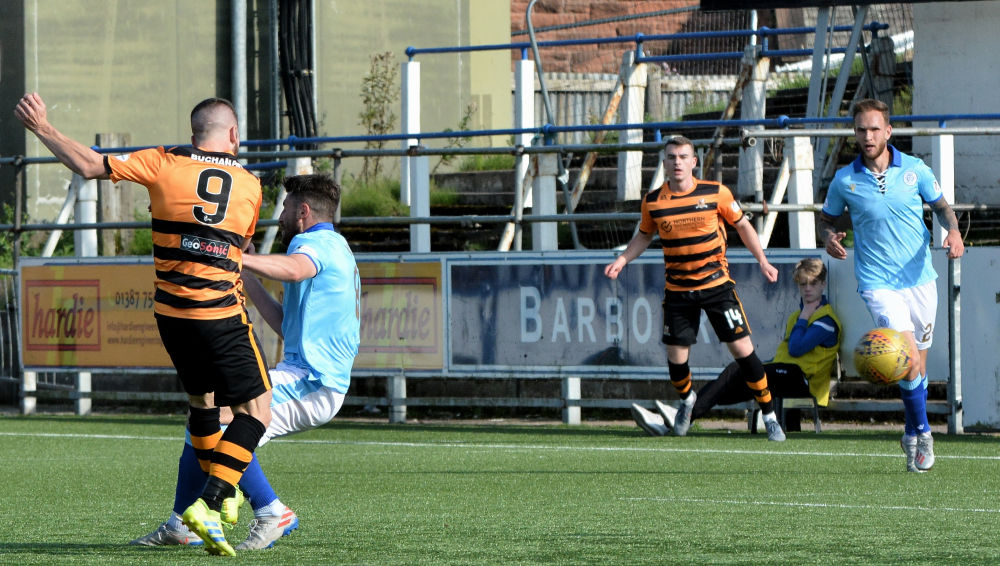 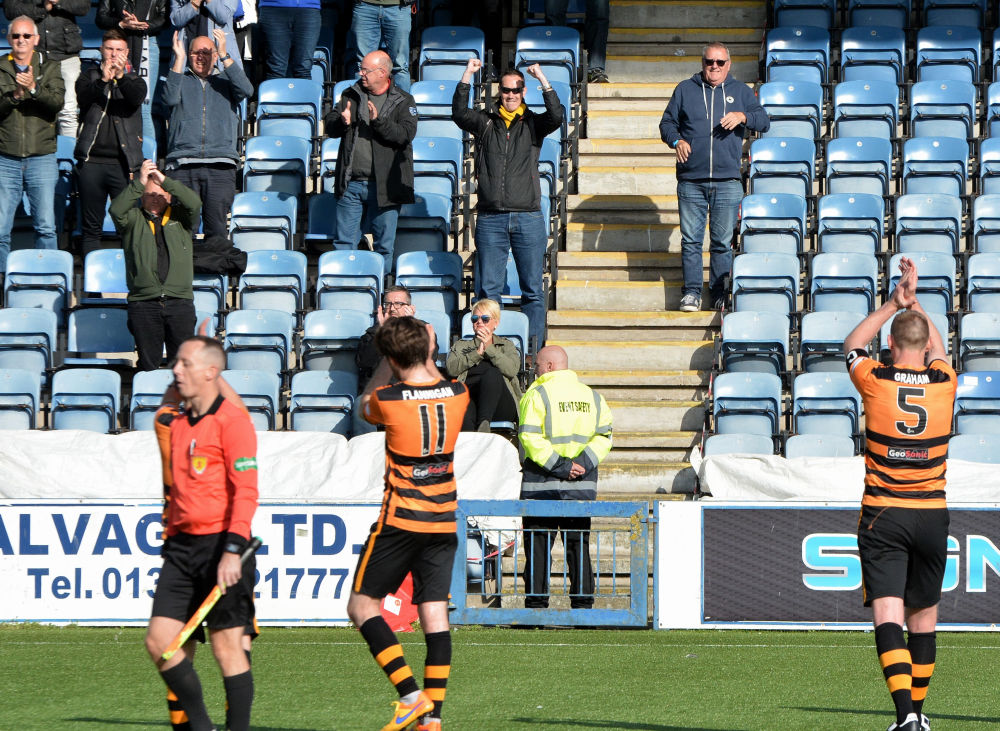 peter grant after win at dumfries

Delighted to get the three points, today’s performance was a different type of performance we showed that diligence to go and fight for everything and I think that’s what won it in the end, we know we have goal scorers in the team, you can see that when Buchanan came on and Robbie McCrorie had to pull off a wonderful save. But you also have to show that diligence to defend well and I thought the boys did that fantastically well. Completely different from last week, I thought we were very tentative against Arbroath, this week we showed a diligence to work hard without the ball, to get behind the ball and work hard and we showed quality at times and got the balance about right, it’s great to get the three points.

Although Queen of the South had some pressure, I can’t recall our goalkeeper, Neil Parry having a save to make, yes we defended really well, from the front guys right through and your best defenders have to be your forwards and I thought they did that exceptionally well. We could have scored more goals had we had taken more care on the breaks we could definitely done that, that’s the both sides of the game, you have to defend exceptionally well if you want to take points, I think we deserved them, nobody could argue about that and our keeper has not had a save to make in the full game.

The goal was a superb bit of quality great counter attacking move, cross and great finish. We know we are capable of that we have the players but the biggest thing is when we have the ball we are always very open cause we want to go and play an expansive game, the central midfield players making runs beyond the ball even when we were 1-0 up, that is something we need to organise a bit better to do that and get better at it. People say to me what is the difference going part time probably that might be it, just not having the time to work with the players, limited to two nights a week to go through these strategic things on the pitch but I know these boys are intelligent to take these things on board but the first thing is to learn how to win games of football and I thought we did that exceptionally well today as I said our keeper never had a safe to make and their keeper had a World class save from Liam Buchanan, so we could have ended winning the game by more but QOS were always a threat cause a one goal lead is a precarious lead.

The most important thing today was to win the football game, people do it in different ways, there is no set way to do it, we have to win games of football that is what we are paid to do and our players are more than capable of winning games of football as is everyone in this division. I was at a game last night in Dundee and Dundee unbelievable got beat 6-2 and I thought Dundee played very well, it just shows you what the league is like there are no easy games. Arbroath having defeated us last week have again won again today defeating a Dunfermline Athletic side again showing there are no easy games. We are no different from anybody else in this league we will look to win every game we play in, we are capable of winning the games we will be playing but to do that we have to play exceptionally well both with the ball and without the ball.

Blair Malcolm made his debut today and I was delighted with him, he is a young man who has not played many games and I thought he gave us a little bit of balance on the left hand side of the pitch, he has good energy I thought his quality on the ball was good, he did get caught a couple of times but he did everything that was asked of him.