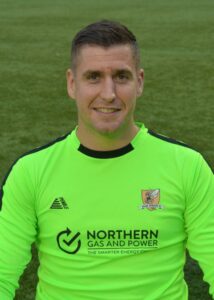 One of the best part-time keepers in the game, only became available after Airdrie opted to go full-time at end of season 2015/16. Tall six foot five player who in the past has given service to Albion Rovers, Athurlie, Petershill, Queen’s Park, Stenhousemuir & Airdrie, previous winner of Golden Glove award and picked for PFA League One Team of the season in the past. Last season suffered a serious injury in Tunnock’s Caramel Wafer Cup game at East End Park v. Dunfermline Athletic which required surgery, the operation went well, and Neil returned to action for “The Wasps” v. Dundee at Dens Park on 3rd March, 2020 and finished the season strongly