The Wasps went down to league leaders Queen of the South, by virtue of a late disputed penalty, indeed they looked to have cause for disappointment when they, themselves were denied a penalty just minutes after the Queen’s award. Certainly Paul Hartley’s side did not deserve to lose this game, Queen’s will certainly be relieved to be going back to Palmerston with full points. Queen’s took the lead five minutes before half-time, when top scorer Nicky Clark, showed how dangerous Queen’s can be even although the home side had the best chances to go ahead. Kevin Cawley desrvedly heads “The Wasps” level just before the hour mark, Calum Elliot looked to have given the home side the lead but remarkably his chip shot was hooked off the line at the last minute. Calum Elliot again had an opportunity to put “The Wasps” in the lead but his shot, which had beaten Queen’s keeper Robinson struck the crossbar. Queens survived again when Martin Grehan struck a great shot, which the keeper turned over the bar. Then with only five minutes left Derek Young went down in the box and Daryll Meggatt was adjudged to have fouled him for the winning penalty. After this was the handball in the other box which the referee missed and Alloa ended the game empty handed. 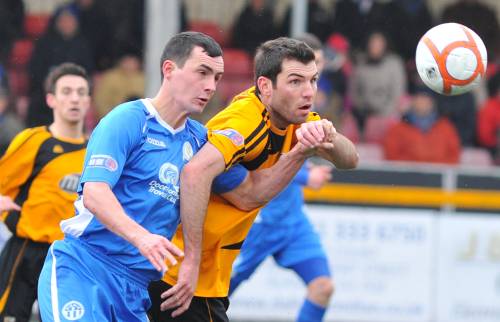 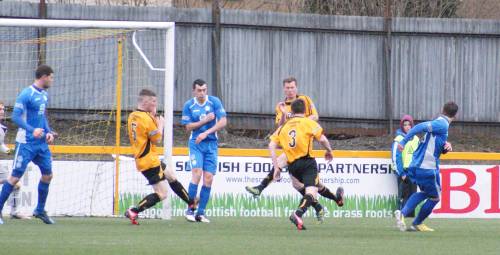 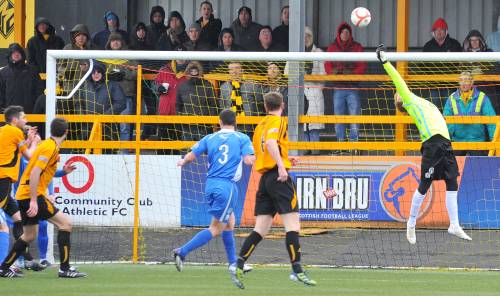 PAUL HARTLEY AFTER DEFEAT TO QOS

I think we should have had a penalty, it was a stonewaller when Chris Mitchell handles in the box and how the referee doesn’t see that I’m amazed, our player, involved in the penalty given five minutes from the end is adamant he never touched their player but sometimes these decisions go against you I was just disappointed in the manner of that, but I thought overall the team were excellent, they played really well today, I thought in the second half we were outstanding, we had a good shape and some of our play was good at times. Elliot playing in that position just behind the front two, Cawley and Grehan were a handful, I thought they played well, they had good shape about us when we didn’t have the ball and we worked hard and had some good quality. The players were still raging at the penalty decisions, they have a strong mentality and look to win every game, we still have a lot to play for, getting into the play offs is still the target, we will still be having a go, the players never lie down which is important for us, I have to commend them on their effort today and the way that we played, lots of positives to take into the next game against Stranraer, Queen’s knew they were in a game today, we played well, created good chances, I thought the players were outstanding – they put a lot of effort into the game. Certainly very unlucky to come away with nothing out of the game – but that’s the way football goes at times, but I think for the players effort and their performance nobody could fault them, they were great.