“The Wasps” won a massive three points at Dumfries, defeating Queen of the South 2-1 with a last minute winner at a ground the club had not won at since 19th April, 2003 when a Stevie Thomson scored the only goal of the game.

Having been on a losing run, many people had again written Jim Goodwin’s men off after the defeat by Partick Thistle had seen them move to the bottom of the league, but the Alloa players were out to prove all doubters once again.

The first chance of the match fell to the home side with Andy Graham having to clear Lyndon Dykes shot off the line.

Dario Zanatta was then unlucky when his netbound shot was pushed over the bar by Alan Martin in the Queen’s goal, but the Alloa fans only had to wait for the corner to come in and captain Andy Graham vollied home at the near post.

Stevie Hetherington in charge in midfield
Queen of the South equalised after 59 minutes when Kyle Jacobs vollied home after Neil Parry had saved well from his initial header, although the QOS announcer confused everyone by announcing the goalscorer as Iain Wilson?

Queen of the South were now looking the more likely side to score but the Alloa defence stood firm and with people looking at their watches Dario Zanatta broke clear down the left wing and sent over a peach od a cross for Jordan Kirkpatrick to head home the winning goal.

Having been edged out in games we might have taken something from it was fitting to get a victory on this occasion. Dario Zanatta always looked capable of finding that bit of pace and his eye for goal found a winner for “The Wasps”.

Andy Graham clears off the line 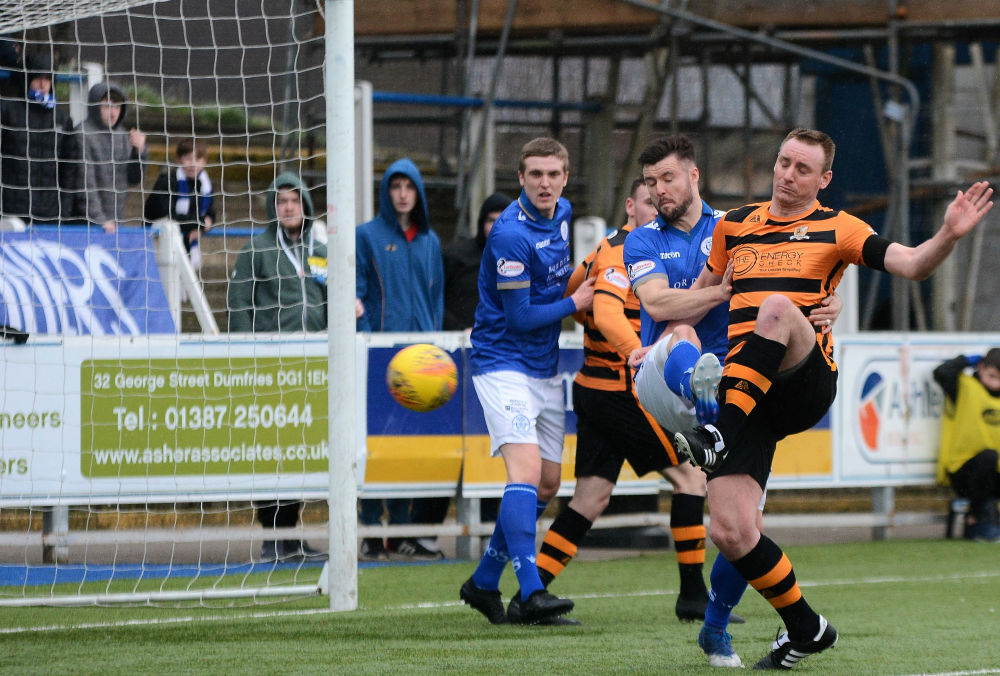 Andy Graham scores at near post 1-0 to The Wasps 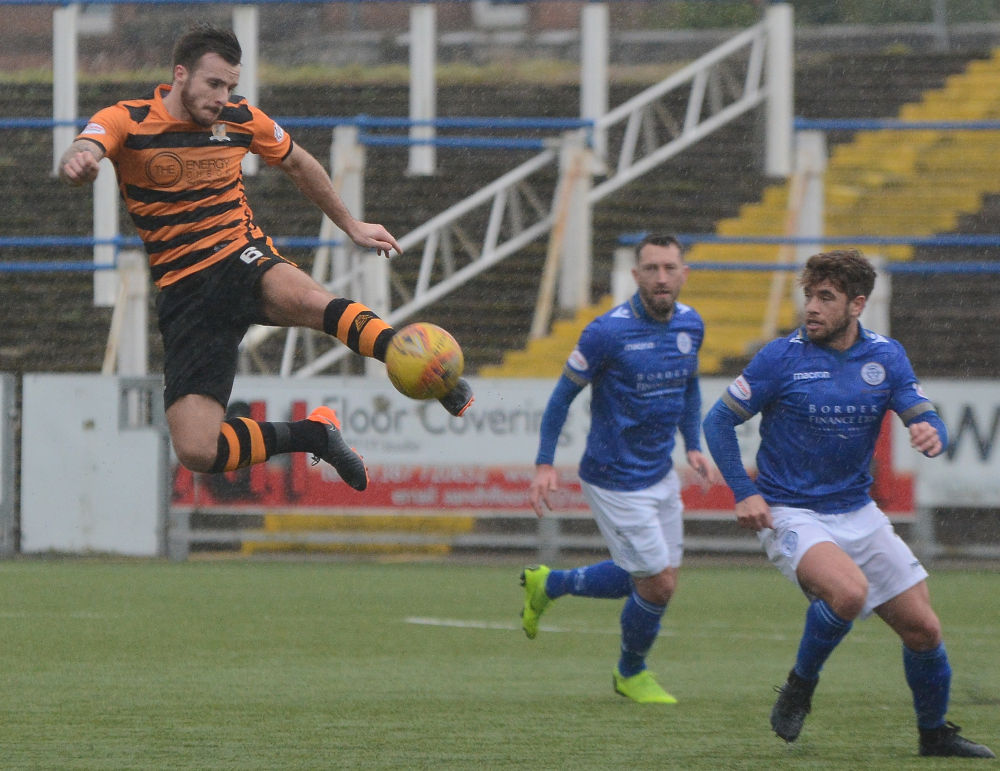 Stevie Hetherington in charge in midfield 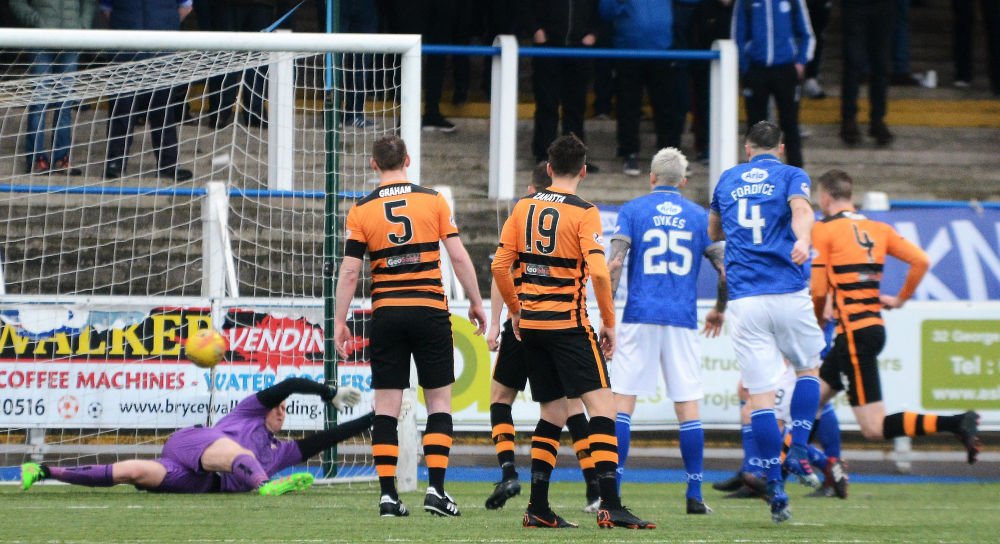 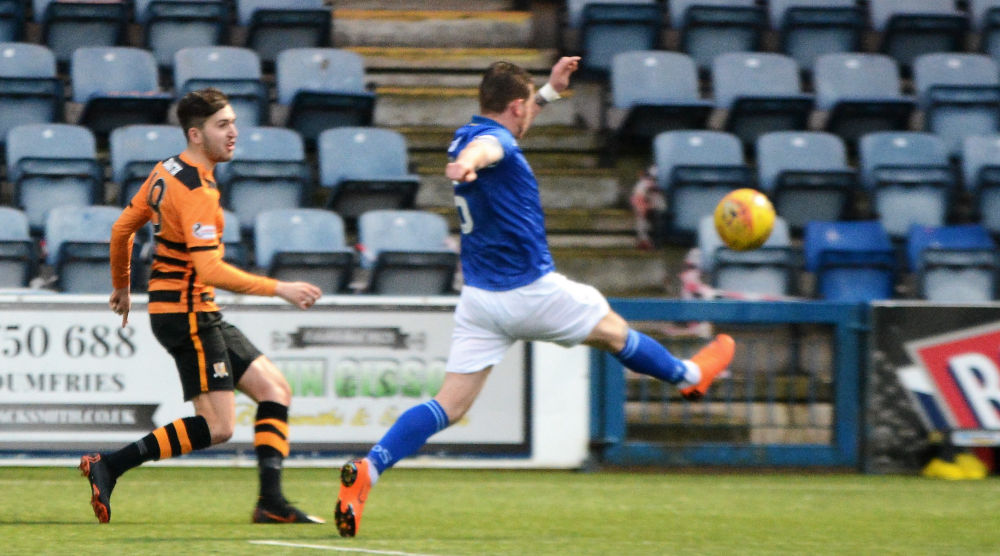 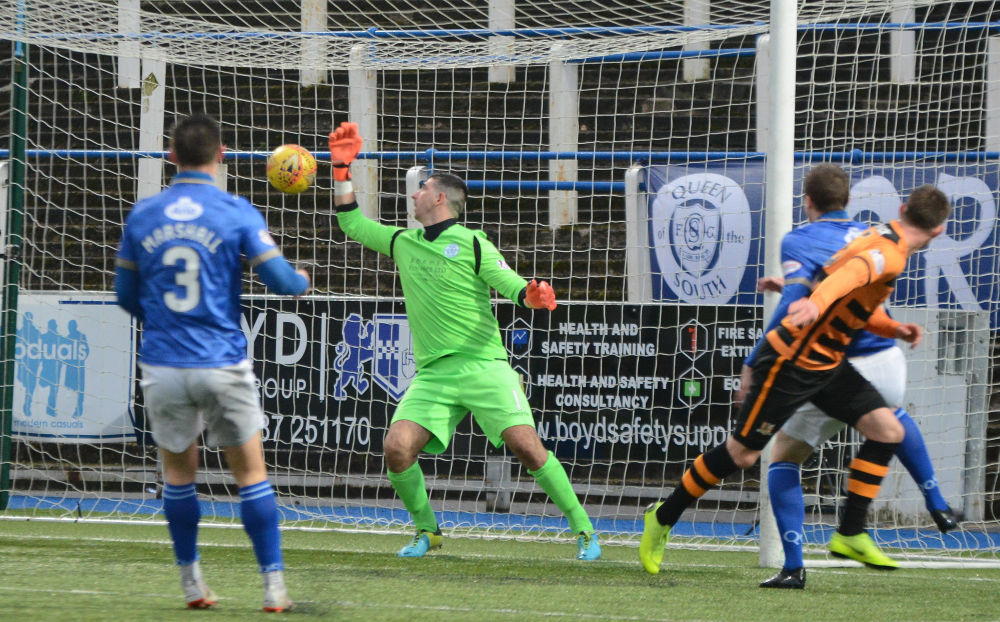 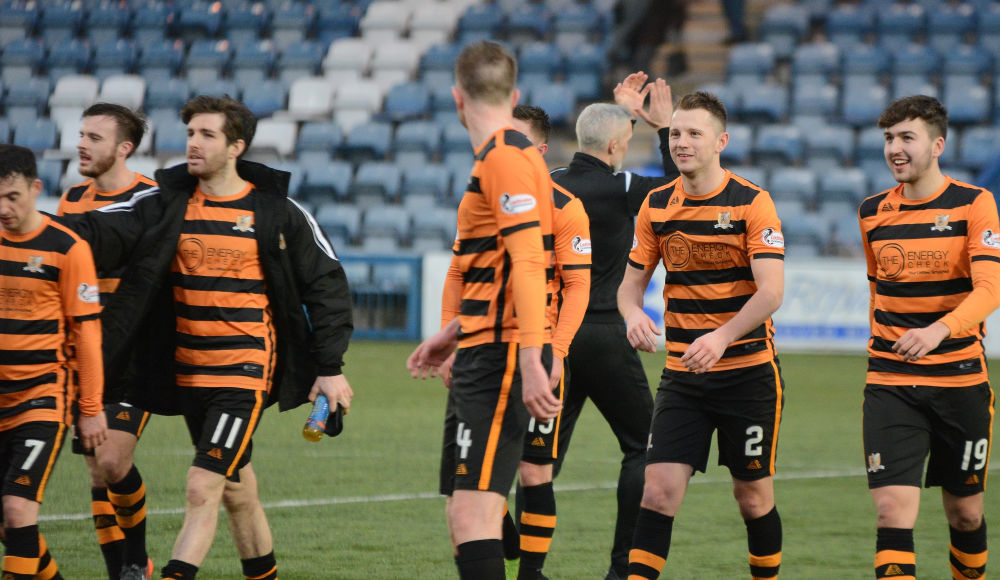 JIM GOODWIN AFTER VICTORY AT DUMFRIES

If there was ever a game of two halves you have just seen it there, I thought we were the better team in the first half and deserved the goal lead at half-time but full credit must go to Gary Naysmith because he changed the shape and had us penned back for the majority of the second half and it was very much backs to the wall, I must give great credit to our back four and goalkeeper for managing to avoid a second goal and we just stayed in the game and to be honest with you with five minutes to go I would have been delighted with a point but Jordan Kirkpatrick pops up with a massive goal from our point of view and he does what you hope all substitutes do and makes a positive impact on the game, “Kirky” has been one who has been unlucky to be out of the side, he has been very disappointed not to be in the starting eleven but his attitude is spot on and he goes on today and manages to score the winner.

The first goal from a set play which we spoke about prior to the game having worked on one or two during the week but that ball was supposed to go round the back, but big Andy managed to get a great finish so we are delighted with that one, we had good presence in the box and good delivery so it is important we take advantage of that.

Today was more about the resilience and togetherness of the group, when Queen of the South equalised it would have been very easy for us who have been on a very poor run of form to capitulate but it just shows you the strength of the group and the mindset and characters we have, huge just to keep going until the last kick of the ball.

As always everybody had written us off with losing our last four league games but it was only four weeks ago everybody was talking us up being the form team in the league and hadn’t been beaten in six, we have had a wee dip in form but that lets us jump a couple of places up to eighth so maybe it is Partick and Falkirk’s turn to catch us up.

We probably didn’t deserve to win the game, I think I am quite honest in how I assess the games and I am not going to come in here and say we toughly deserved the three points because we didn’t. I thought Queen of the South were the better team but we have played really well on occasions this season and got nothing so today was our turn for being on the other end of it, where we played poorly in the second half and managed to go away with three points. I feel for Gary and his backroom staff and players because I thought they were excellent in the second half, but credit goes to my keeper and back four because they managed Dykes and Dobbie today., because for me they are the best partnership in the division, so it was good to keep them quiet and stop them scoring.

The result today was massive, it puts a stop to the rot and we can now start looking up again. It is amazing how tight the league is and how entertaining it is as well every team can beat each other there is nobody adrift a the top or the bottom and keeps it entertaining from a fans perspective, we are delighted with ten games to go we are still in it which is massive for me and the club because everybody had written us off before a ball was kicked.

Hopefully that has been our dip in form and we can now start putting a run together like we did six weeks ago.