This was another huge win for the club, although for the winning goal fortune smiled on us on this occasion. The wind at times spoiled the game and it was the elements which helped Stevie Hetherington score direct from a corner kick in the second half which proved to be the only goal of the game.

“The Wasps” started the game strongly but could not get that vital opening goal in the first half, although the woodwork did have to come to the rescue of the visitors, Queen of the South. Queen’s ended the first half strongly and gradually grew into the game and Neil Parry in the Alloa goal had to look sharp to prevent “The Doonhammers” taking the lead.

Jack Hamilton had a great opportunity to put “The Wasps” in front but his shot was saved by the Queen’s keeper Jack Leighfield.

Having got the vital goal through Steven Hetherington’s corner going straight in, Alloa were dealt a huge blow minutes later when Andy Graham had his nose broken after being caught by a challenge by Lyndon Dykes.

However at this stage in the season, the only statisic which was important was gaining another three league points as the club strive to retain their postition in the Championship next season. The team defended well and had the defence and Neil Parry to thank on this occasion and now know survival is in their own hands with only three league fixtures left this season. 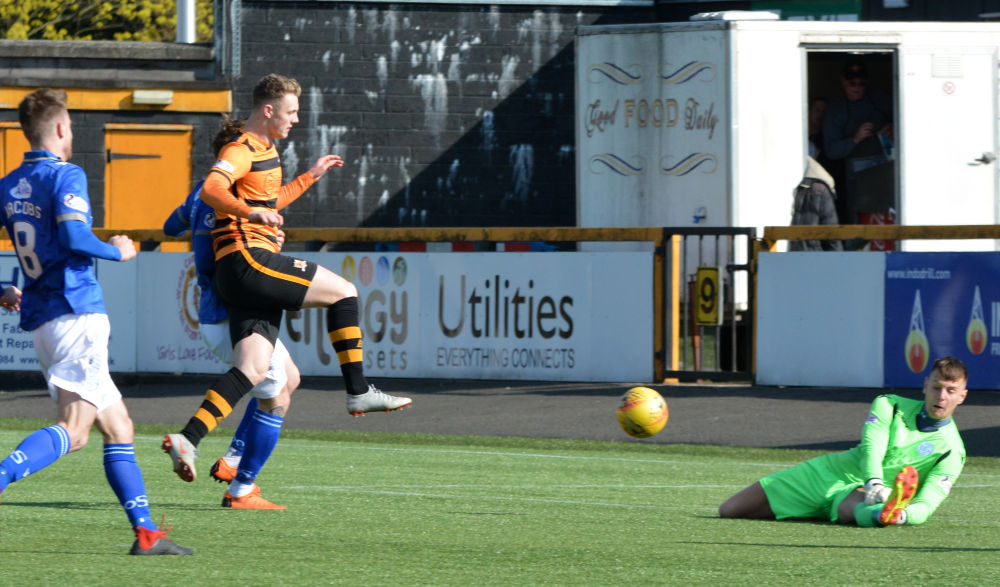 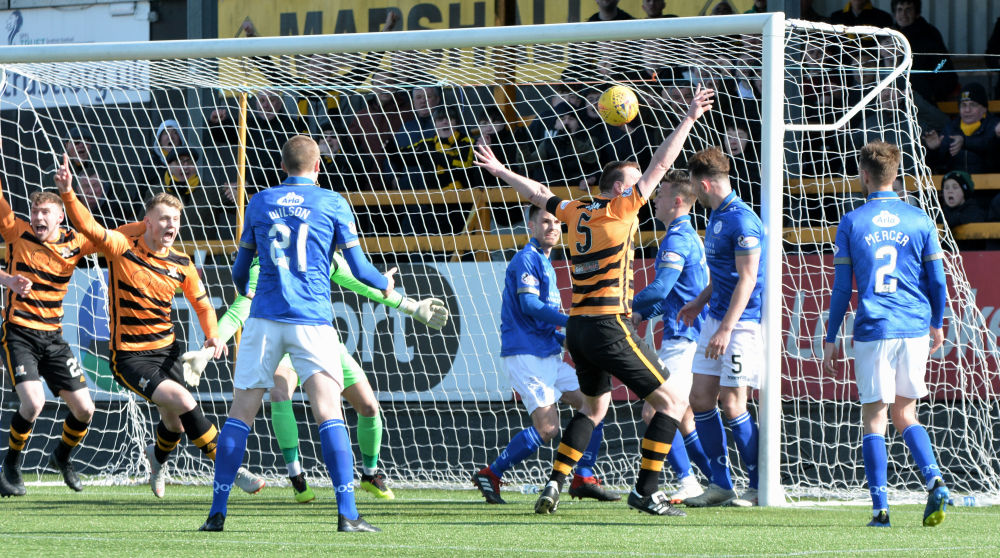 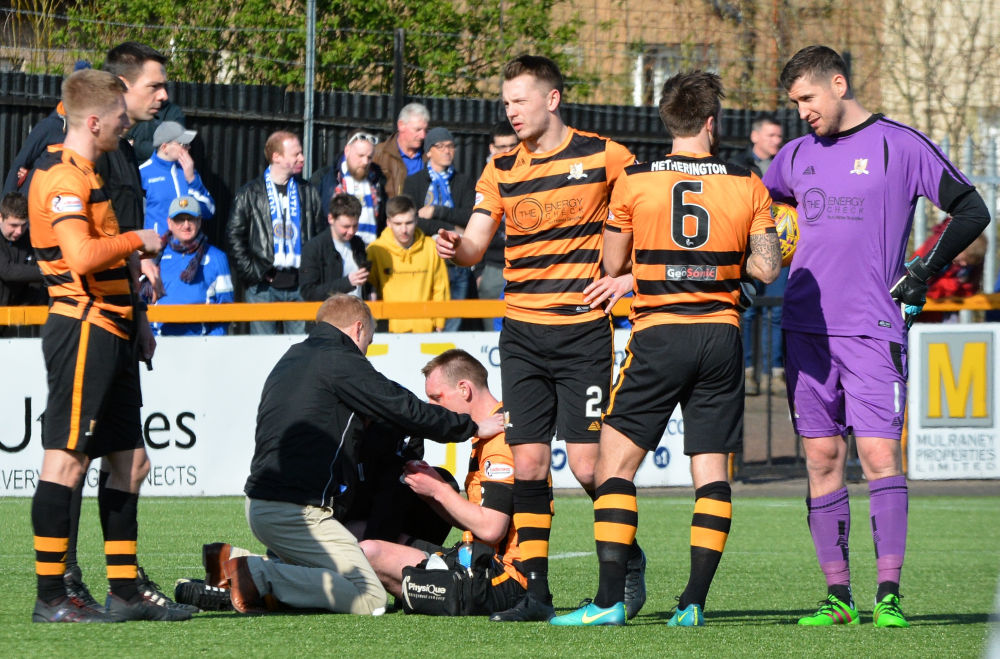 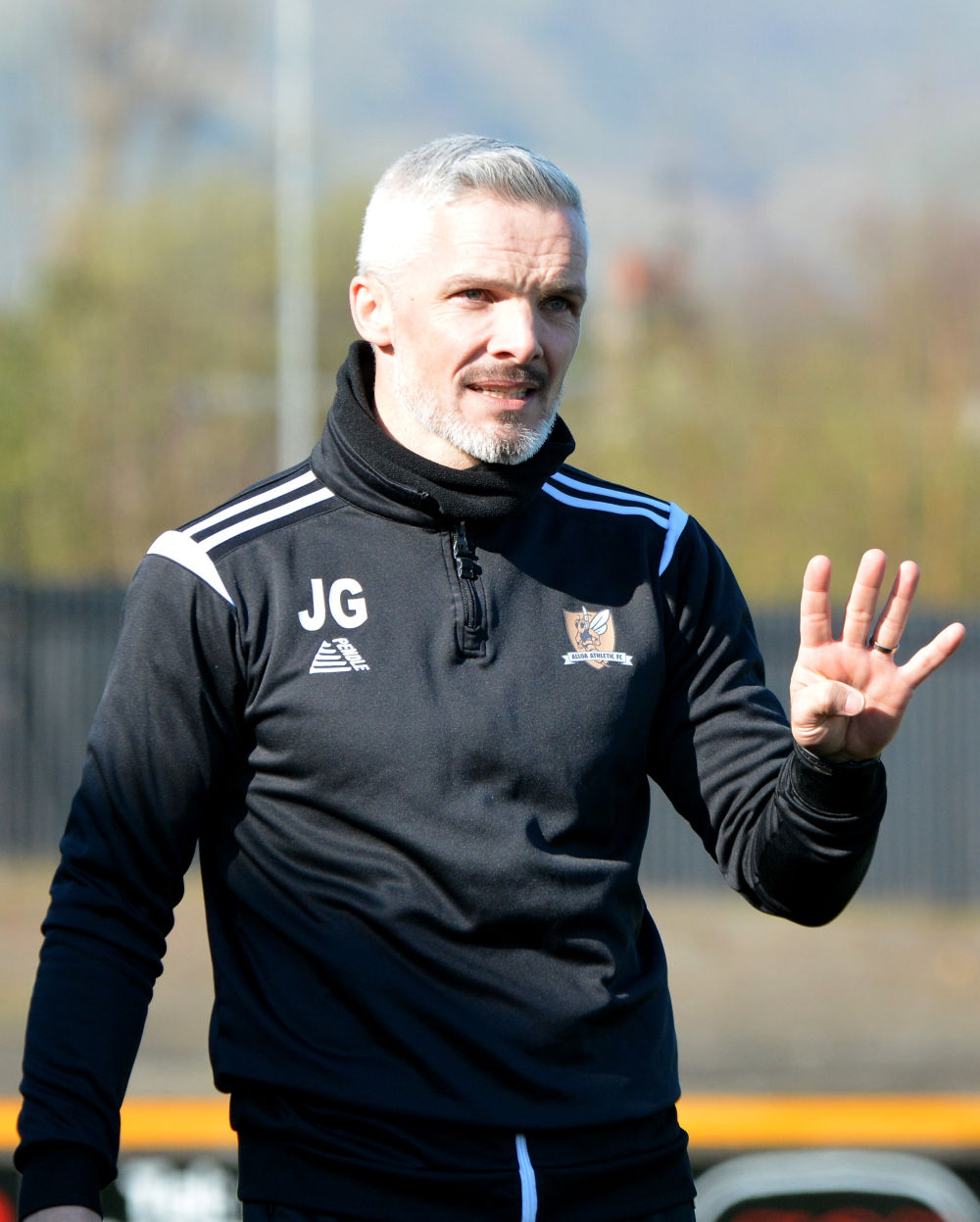 We are over the moon again, fantastic, the boys are terrific, we didn’t play particularly great today we have played a hell of a lot better than that and lost, people say it evens itself out but that is as bad a performance as we have put in, in terms of possession in a long time but it just goes to show again the resilience of the defenders and big Neilly in goal  who had to make some important saves and we managed to stay in the game. I thought we started the game particularly well in the opening 15 – 20 minutes and were on top, hit the post and looked as if we were going to go in front then in fairness to Queen of the South I thought they were the strongest team for the rest of the first half.

In at 0 – 0 at half-time and we knew we had to improve going into the second half and I thought the second half was a lot more even to be honest. We know the threat Queen of the South have, they are very direct in their approach up to Dykes who is very good in the air and we had to match runners off him and I thought the boys did that, it wasn’t pretty, we got a bit of luck today and I’m really pleased for the boys and that is the first time in the club’s history they have managed to win four games in a row in the Championship, so it is another one the boys can tick off, they have achieved a lot this season so I’m delighted for them.

Andy Graham is an absolute warrior, it is the best word to describe him he has played through so many knocks and injuries that people wouldn’t believe me if I told them, he has a hole in his calf an inch by an inch deep and he had seven stitches in it up at Inverness which got infected. He now has suffered a broken nose today, he has all kinds of problems the big man but he is never willing to throw the towel in and he typifies everything about us as a club and us as a group in terms of character. Just desperate to do anything to make sure we stay in this league. I thought he was outstanding again, we did have a number of good performances, yes we didn’t play well going forward and we know we need to do better on the ball but my back four and particularly big Neil Parry, were brilliant on the day.

The goal we worked hard it in training all week!

No the conditions were difficult, it was very blustery out there, it was one of these ones as the corner left Steve’s boot I thought it was going over the bar to be honest with you, but we got the luck and it went straight in. You get your luck at times and on other occasions we have had bad luck along the way during the season so this was a very good time to get some good luck.

We are delighted but I am pretty sure Gary Naysmith will be extremely disappointed because I thought his team were excellent and If I am being honest and I always try to be honest in my assessment, I thought they were the better team on the day but we got our rewards for our resilience and managing to stay in the game.

We still have three massive games to come and I try not to look at the number on the left with us being in sixth than the points number on the right and I think it is really important for us as a group not to get carried away with that. Yes we are sitting in sixth and delighted to be there but at the same time we are only four points off bottom. All the teams below us are more than capable of winning a couple of games out of the next three, so we just have to make sure that we carry on doing our job between now and the end of the season and I think if we can get one more win then probably that will be enough to keep us in the league.