Victory at Palmerston Park, Dumfries against Queen of the South on Saturday kept a great run going by “The Wasps” at this ground, where they last lost in the league back on 23rd January, 2016. Collecting another three vital league points, which is now ten out of twelve points from their last four Ladbroke Championship matches.

Kevin O’Hara was the player catching the headlines again after scoring another double, that is now three doubles in last three matches, six goals taking his season tally to thirteen.

The Wasps would race into a two goal lead after fourteen minutes, this time Kevin O’Hara was the provider, getting down the left wing and crossing for Robert Thomson to score his second goal of the season.

Queen’s were struggling to get a foothold in the game but they took hope from the most unfortunate incidents. Jamie MacDonald was kicking the ball from the ground upfield when he felt a twinge in his hip and unfortunately had to leave the field of play.

This was a blow for the keeper who is still revered for his time at Queen’s and playing for them in a Scottish Cup Final. Andy Wilson who had just returned to “The Wasps” from Petershill got an early call and was to be one of the mainstays in Alloa returning with the three points.

Queen’s brought on ex Alloa striker Jack Hamilton at half-time for Gary Oliver and within seven minutes he had pulled a goal back, hesitancy in the Alloa defence allowed Hamilton to bundle the ball over the line. Six minutes later Stephen Dobbie does what Stephen Dobbie can do and scored with a vicious shot from just outside the box 2-2.

Alloa gradually played themselves back into the game, Ben Stirling replaced Blair Malcolm to make his debut after signing on loan from Hibernian. With the home side still looking for a winner, Alloa looked dangerous on the break. Kevin Cawley played the ball wide and Ben Stirling charged forward down the right wing, cutting inside Stephen Dobbie and floating a perfect cross into the box for Kevin O’Hara to fire home from close range and send the visiting fans home happy.

In the final ten minutes Queen’s threw everything at the Alloa goal but the defence and goalkeeper Andy Wilson stood resolute. Indeed Andy Wilson was to prove a match winner with fantastic saves from Stephen Dobbie and Jack Hamilton to break the home fans hearts. 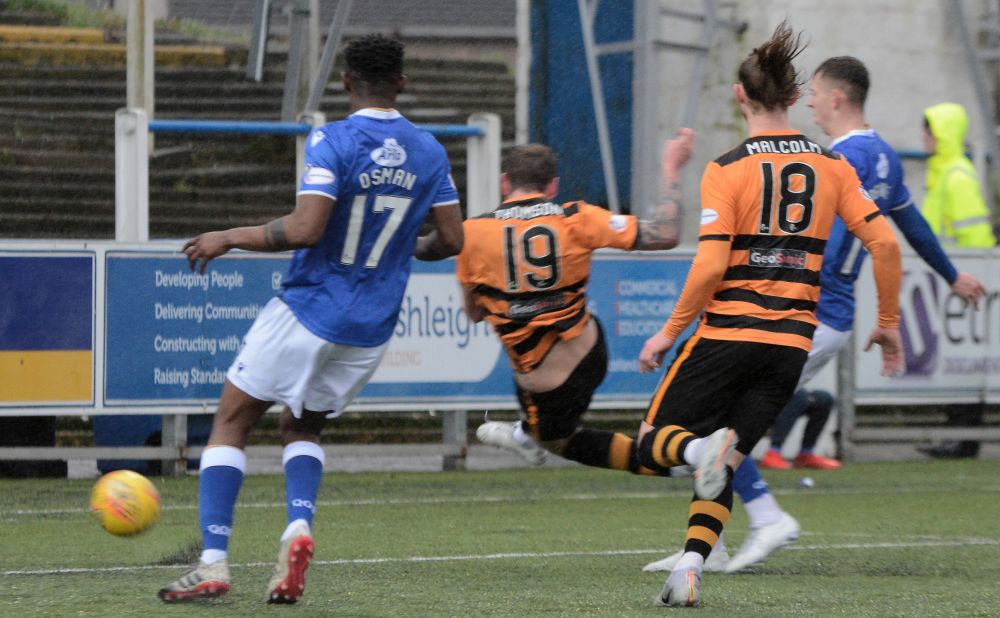 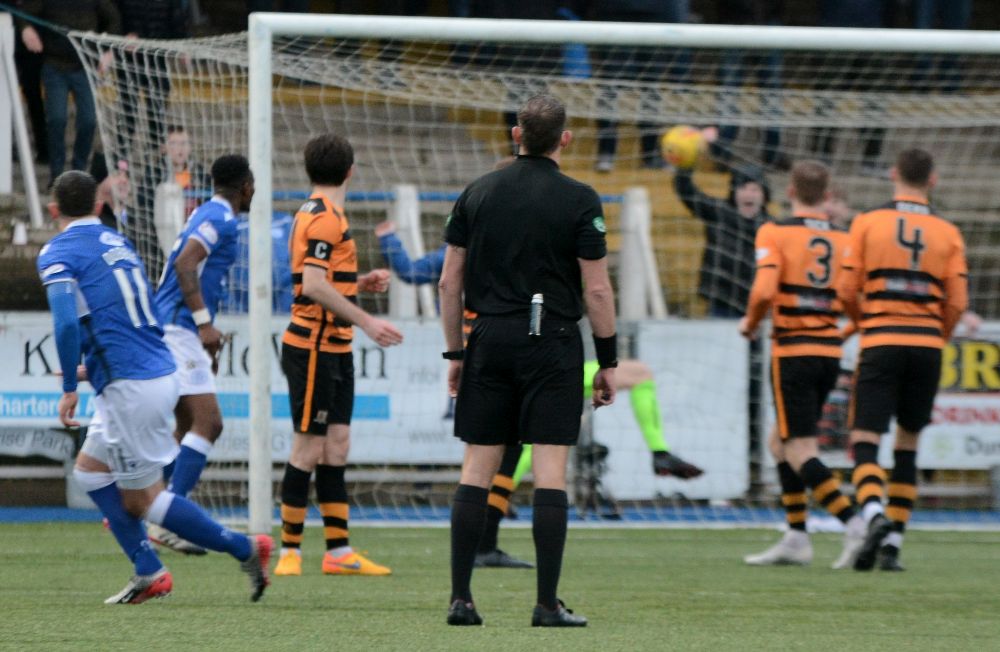 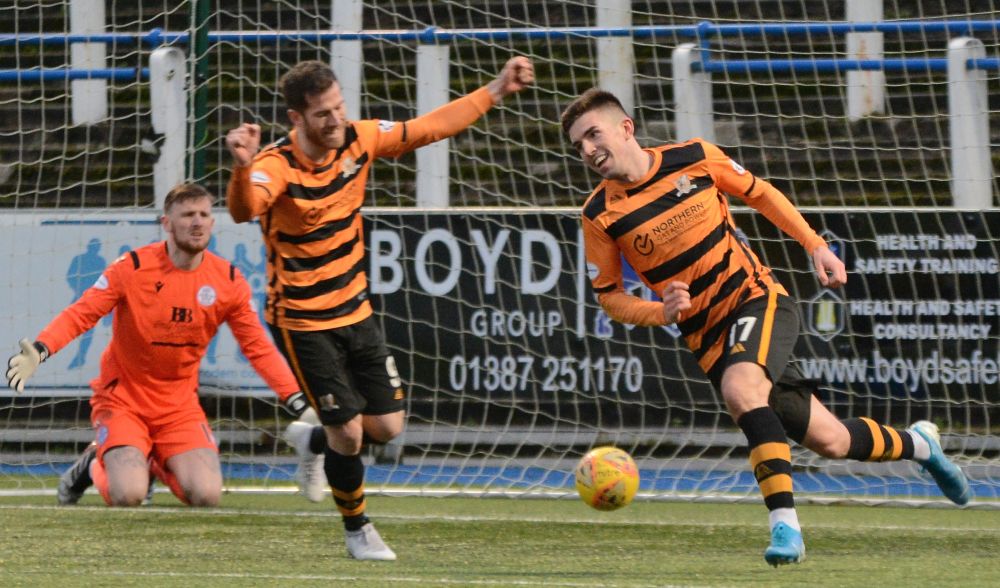 That man Kevin O'Hara again sends Alloa into the lead. 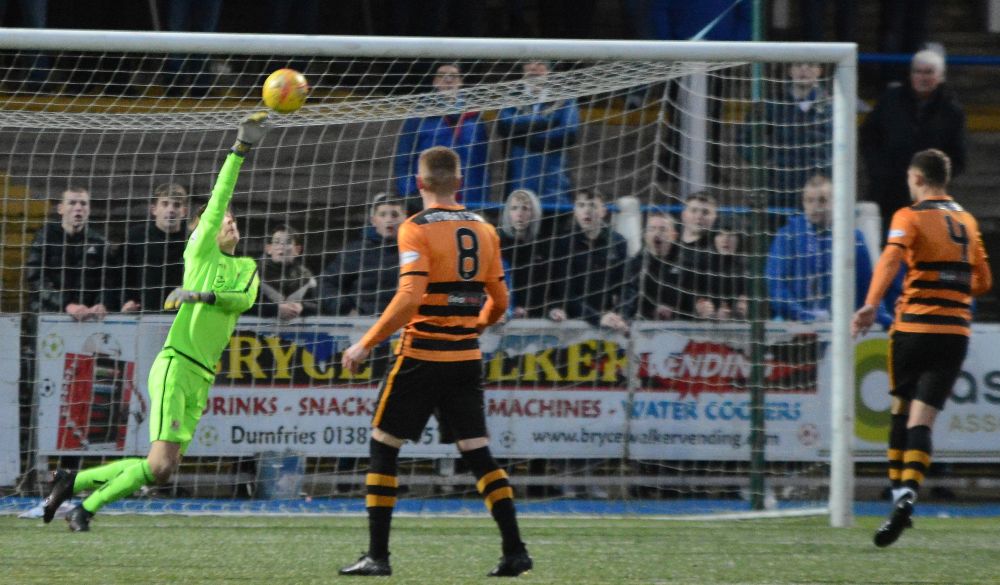 Peter Grant after 3-2 victory at Dumfries

A great victory with the players once again showing fantastic character, we have had some of our players who have not been training for a number of weeks now and some putting themselves out there but still not match fit like Alan Trouten, Robert Thomson hadn’t trained all week, Stevie Hetherington, Jon Robertson and Kevin O’Hara hadn’t trained and then Jamie MacDonald has to go off with an injury after we were two goals up, that was a blow physiologically for the players, it doesn’t matter how good your next goalkeeper is the fact that Jamie had to go off lost us a bit of rhythm, Queen’s got it back to 2-2  and were making it difficult for us and put us under pressure the wind appeared to help them but we got it back again. The pleasing thing for me was how we got back into the game, I thought young Ben Stirling came on and was outstanding, his composure, aggression in the air, all the things we were looking for. It is the first time I have had a full bench all season and that is a big thing to have boys to come on and do a job and that was a strength, we just hope not to get any more injuries, it is unusual in the players who have been out like Andy Graham who hadn’t missed a game in five years.

Paddy Connolly had said to me we had been 3-0 up here at Palmerston before and drew 3-3, the boys were conscious of that and what shows greater character is the fact some of the players would have been involved in that game. For the winning goal Ben Stirling put his head down and made a fantastic move up the side of the pitch and delivered a fantastic ball in and Kevin O’Hara was there to do what he has been doing exceptionally well to put the ball in the net.

Jamie MacDonald felt a wee pop at the top of his hip just kicking the ball, he felt if it was his left foot he could have carried on but because it was his right which he kicks with predominately he had to come off, we are hoping it will not be too long, if he misses next week hopefully he might be fit for following week that’s what we hope but he will go in for a scan at Kilmarnock on Monday.

Andy Wilson only just returned to the club after a period on loan at Petershill where he had done well, he was fantastic I am delighted for him, young Chris Henry had been on the bench and I am always conscious of young boys not getting games of football so he went to Petershill to get match time, it is important that young players get time on the pitch. Andy pulled off magnificent saves although he will need to work on his kicking obviously, but the saves were match winning saves. The first eleven players look after themselves but your substitutes are so important and that’s why I said I was delighted to have a full bench today letting us adjust at certain times in the game.