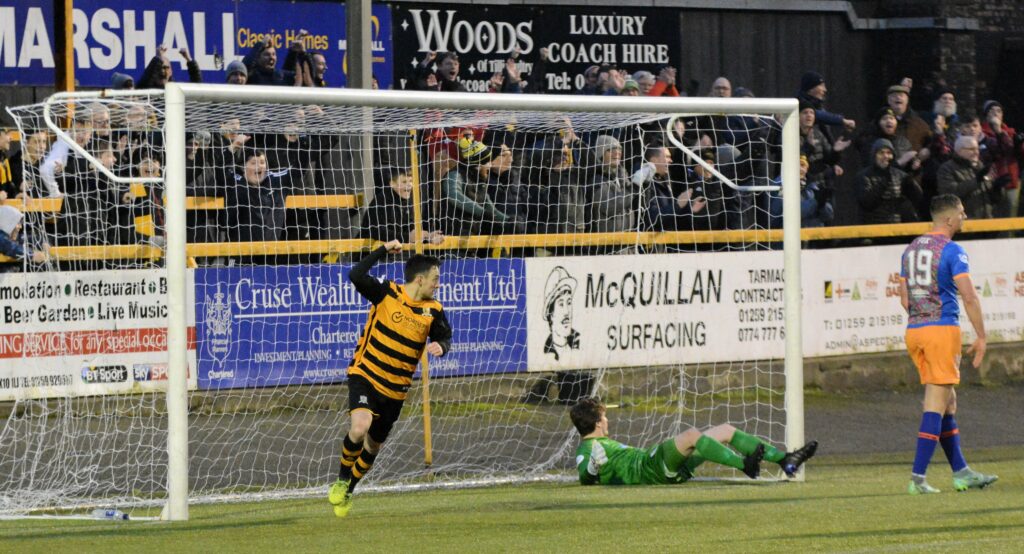 Two sides in poor form faced off at the Indodrill today. Managerless Queen’s Park were lead out by the suave trainers and long coated, Director of Football Marijn Beuker, for the first time.

Both sides were tentative in their approach until just before 40 minutes the on-loan Hearts midfielder Connor Smith produced a top class finish to curl the ball effortlessly into the top corner past a planted David Hutton. You won’t see many better placements from outside the corner of the 18 yard box.

The second half started more positively for Alloa and they progressively pushed Queen’s Park into a deep block by constant recycling of the ball. The pressure Alloa were producing paid off when Church sent a enticing cross onto the head of Henderson and Ferrie could only flap the ball at Kevin Cawley’s feet. The Alloa legend made no mistake and equalised.

Queen’s Park could have restored their lead if Connor Smith converted a much simpler finish. He met a low cross in the box but could only direct his first time shot a yard wide.

Alloa too could have taken all three points on the 84th minute, when King spurned two what, looked like easy, close range finishes by placing them directly at Ferrie and Gillespie respectively.

A point was not massively favourable for either side in the end as their poor runs continue.

“I was really happy in terms of the level of effort. I thought there was real quality in some of our play, sometimes we were a bit wasteful when we got into the final third but up until they scored I thought it was an even game. That hurt us a little bit but I thought we came out in the second half and once we got a goal I thought we could have went on and got the three points so disappointed in that. I thought, in terms of their effort in the second half, we deserved the three points. We created a number of opportunities where just that final ball wasn’t good but in terms of desire and application from the boys I cant ask for any more. Disappointed not to come away with the three points in the end because I thought we deserved it.”

“I’m trying to bring players in, we’ve lost out on three players [last week] which has been disappointing but they’ve went to Championship clubs. I’ll be speaking to players over the next few days to try and get bodies in. There’s also a couple who will be leaving to go and get game time. Gilmour’s a massive loss, huge loss but that’s the gamble you take when you take players on loan and they come and do well for. Charlie, for me, has been outstanding in the 11 games he’s played. He’s going to go back and he’s going to play with St Johnstone, that’s why they’re taking him back so we’re devastated but it’s good for us that he’s going to go back and play. If he doesn’t play we’ve got an agreement with St Johnstone that we can get him back. Henderson’s going to go back, that was his last game. They’re just trying to get a couple of players in but he’ll be coming back to us, hopefully he’ll be coming back this week but that depends on Hearts signing players so that’s why I’m going to be busy trying to get players in but I’m not going to bring players in for the sake of it, it needs to be the right players.”