“The Wasps” securred a valuable point on the road in midweek against Dundee at the Kilmac Stadium Dens Park thanks to a superb performance from Neil Parry who was making a surprise return to the first team having been out with an injury since the 7th September, 2019 when he suffered a hamstring injury in Tunnock’s Caramel Wafer Cup tie against Dunfermline Athletic.

After the disappointment of losing their unbeaten record at home to Ayr United on Saturday, Peter Grant’s side once again proved how difficult a team they can be to beat, indeed the opening chance of the match fell to Kevin O’Hara but his effort flew past the post.

Alloa included Scott Banks from the start and the on loan player from Crystal Palace showed some great touches and vision of passing.
The home side had the bulk of possession but a combination of bad finishing and comanding goalkeeping from Neil Parry kept the home fans very quiet.
By the end of the evening Dundee had thrown everything at “The Wasps” but Neil Parry and his defence to earn a shut out and a good point on the road. 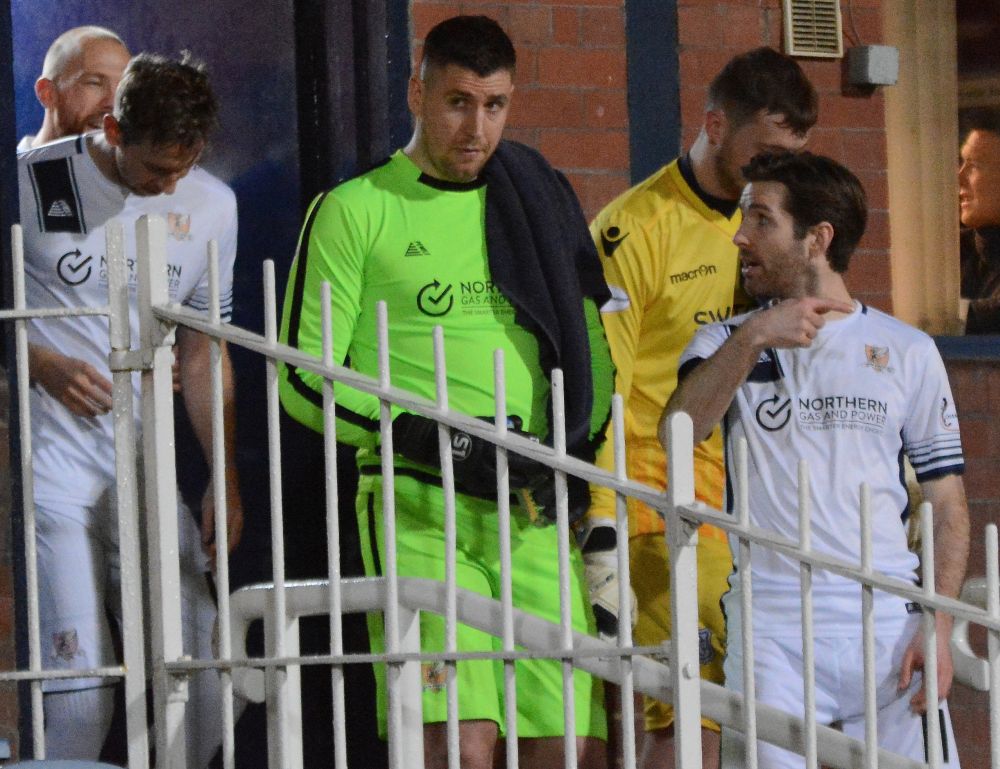 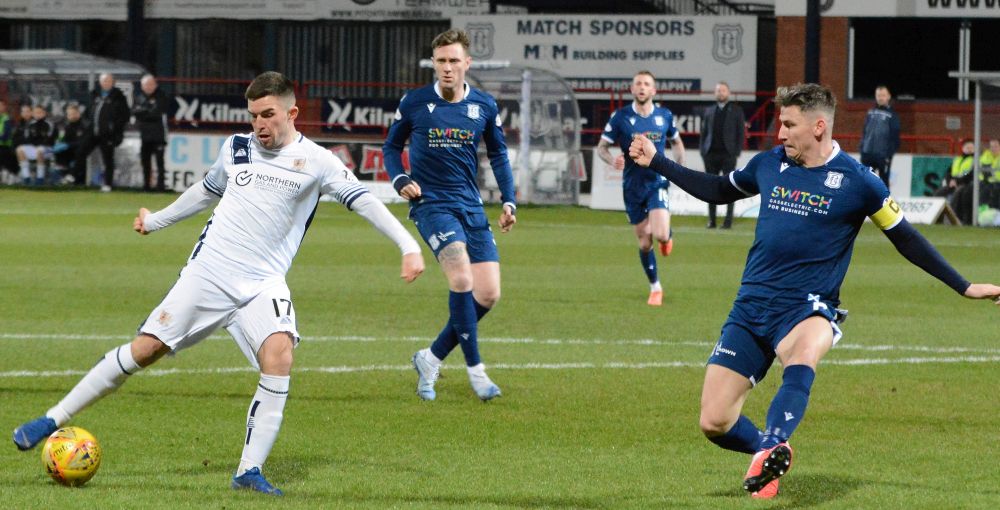 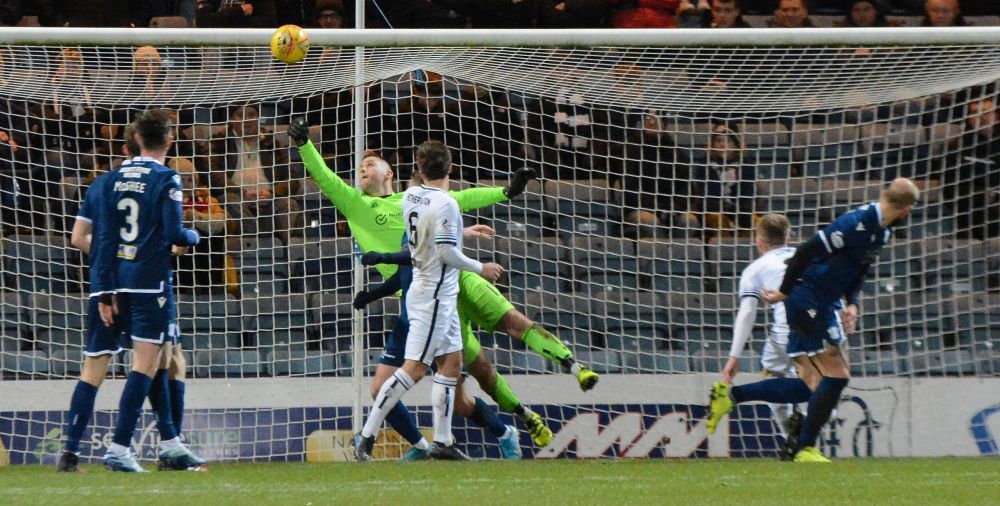 Neil Parry stretches to make one handed save 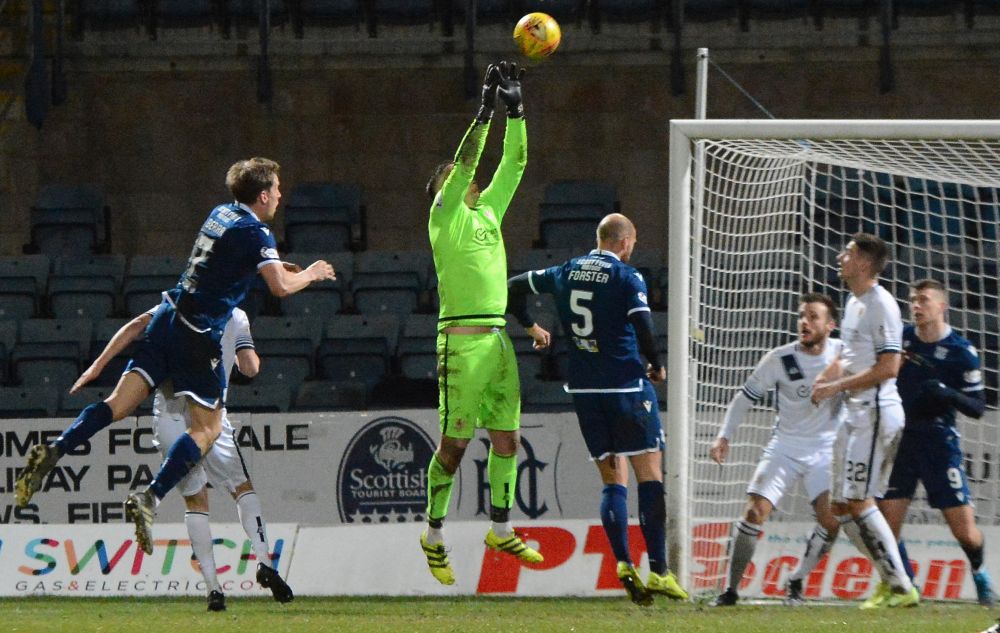 Neil Parry had some very good saves but I thought we played very well with the ball, if we had taken care we could have created more chances ourselves, but it was probably the biggest decision I have had to make as a manager to leave young Kieran out tonight, because I think he has been outstanding for us, I know he made a mishap on Saturday but it was nothing to do with that, I just felt with the centre backs we have missing at the moment we needed to bring someone with a bit more of a presence at this moment in time with experience to help us out and Neil certainly gives us that, he has been training for the past couple of weeks. It is very difficult when you are part-time how to give these players game time, possibly in the reserves but that is not the quality of football Neil needs or the pressure he would be under, so the only way he could get back to this level was through his training, but delighted to have him back but it was probably the hardest decision I have had to make as a manager since I came in.

Frustration is probably an understatement, if you are honest yourself and some of the decisions were ridicules , the free kick he gave at the edge of the box probably summed it up, Iain Flannigan was facing his own goal the boy smashes him in the back and he gave a free kick to them, which is near impossible but yet again I have said many a time I think it is ok, I have to watch what I say and shout I agree with that 100% but I think any man walking in the street would do the exact same because that is not the rules, play the rules and we are alright, that’s all I ask for. I think Dundee were complaining about time wasting and not sure what for, maybe Neil Parry with a couple of his kicks that is fine but they should be delighted for the decisions they were getting.

I think Dundee are a right good side you see the squad of players they have, I had guys coming back after injury, Neil Parry has been out since the start of September, Jon Robertson has been out the last four games and hasn’t trained but because of injury to Blair Malcolm and Robbie Deas being ill, Andy Graham has been out long term we had to shuffle the group roundabout but the one thing I have said many a time about this group of players, they show great desire, Ben Stirling could hardly walk at half-time and I thought we were going to have to make a substitution but he wanted to get through the game and I thought he was outstanding, you get a wee bit frustrated because we played a  lot of good football and if we had taken care in some of the very good areas and people forget we had the very first chance of the game when we should score, Scott Banks did great down the side and rolled the ball back to Kevin O’Hara but he put his shot over the bar and then it would have been a right pressure pot for them but the referee tried to keep them in it with his performance and Neil had to make the saves from a lot of that.