The two seeded teams duked it out for Group H supremacy in the West Lothian sunshine. Alloa carved an early chance over the top with Thomson but he was adjudged to be offside by the linesman in a dubious call. The traffic, however, was mostly for Livingston in the first twenty minutes. One glorious chance from the hosts came from a botched clearance from a curled freekick. Twelve yards from goal with only Neil Parry to beat, Josh Mullin’s effort was blazed over the bar. Alan Forrest in his first season at the Premier League side had a bending effort from the edge of the box but it was comfortably over Parry’s goal and the hosts were making hard work of breaking down the Wee County’s finest.

On the half hour mark Alloa had their first effort at goal. Steven Hetherington with an admirable sliding challenge cut out a Livingston counter attack. With Alloa advanced in the Livingston half, Murray spread the ball wide to Malcolm. His delivery was flicked on to Liam Dick who connected on the half volley for a rasping shot at goal. Even with the added deflection off the Livi centre half Stryjek made a strong save. On the follow-up, though, was Robert Thomson. His driven effort proved too much for the Livingston keeper who despite throwing arms and legs to the ball could not stop the Wasps from taking the lead. 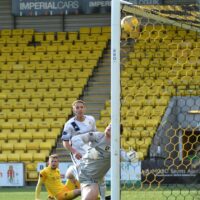 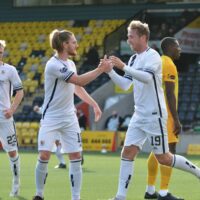 Livingston time and again showed their danger from set-plays. Through a crowd of players Taylor-Sinclar managed to head on goal. Although it wasn’t caught by the Alloa keeper, a high boot from Sibbald came to the Wasps relief. The ball was soon in the back of the net. Livingston’s corner from the left flicked on by the debutant Jay Emmanual-Thomas. An offside Sibbald though throwing his leg at the ball inside the 6 yard box was enough to convince the referee to blow.

Nicky Devlin would pick up a booking for simulation after going over inside the box from a Liam Dick challenge. The contact was certainly slight but Livi would remonstrate with the referee come half-time.

Alloa’s restart was disastrous. Liam Dick targeted for the long ball failed to win the header and when Hetherington was beaten and Grant over-committed, Marvin Bartley marauded up a vacant left side. Jay Emmanuel-Thomas received plenty of respect as he cut in and curled left footed in search of Parry’s bottom corner. The big goalie got low to save but could only push the shot to Alan Forrest, waiting to pass it into the empty net.

4 relentless minutes later Alloa would go behind. A long throw, not claimed by Parry, who succumbed to the challenge of Emmanuel-Thomas, was pushed to Josh Mullin and the Livingston wide man would lob up and over the helpless Taggart and Robertson into the side netting at the back post.

Taylor-Sinclair would almost assist his double-barrelled teammate Emmanuel-Thomas with a cross but Neil Parry would just tip the headed effort over. Alan Forrest too would produce a hairy moment as he curled left footed from outside the 6 yard box, only to be denied by the bar.

Alloa’s three substitutions would start to drag them back in the game. Buchanan on for Thomson, Scougall on for Malcolm and Cawley on for Murray. It was Scougall first to be handed the opportunity as he met a Robertson cross free in the centre of the Livingston 18 yard box. The former Livingston midfielder fluffed at the first time effort, taking his head in his hands at the magnitude of the chance.

Jay Emmanuel-Thomas would almost put the game to bed from Nicky Devlin’s low drive but for the ball being punched out from under him by Parry. Alloa would survive and go on to force a fantastic save from Stryjek. Ever mercurial Kevin Cawley sending an effort towards to top corner only for the Livi keeper to palm clear at full stretch. Buchanan would test Stryjek’s handling ahead of a diving Alan Trouten. Unfortunately for Alloa, it was flawless. Taggart initiated a clean one-two with his right back on the edge of the box but the stand-in captain would lean back and loft the final effort of the game high and wide.