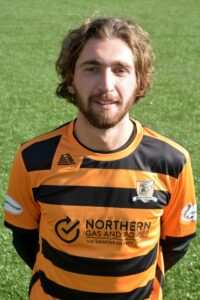 Began his career as a youth player at Norwich City before progressing to first team debut in 2015. In 2017 he had a short spell with Dagenham & Redbridge on loan. Has been capped at Under 19 level for Scotland. Returned back to Scotland joining Clyde where he was a fans favourite, a key figure and Player of the season last year. Great time with “The Bully Wee” but lure of Championship football brought him to Indodrill stadium where he joins his father Peter who is manager.