Once again it would have been hard to pick who was league leaders and who was battling to move away from the bottom of the league, Dundee United manager Robbie Neilson was making sure his side was going to battle in midfield with his team selection remembering how “The Wasps” defeated his side 1-0 in the last Friday night game on 4th October which Peter Grant’s side played attractive, passing and direct football on the evening.

The weather was not great with a strong wind but worse was to come when a blizzard appeared from nowhere thankfully for only fifteen minutes. The first chance fell to Liam Dick which was blocked at the last moment.

Possession in the first half was 50/50 however the best chances fell to the home side, the new United forward line twin treat of Lawrence Shankland and Rakish Bingham were starved of decent service.

Even given the conditions “The Wasps” still tried to play good passing football and were solid in defence when required. Dundee United gained a lot of good possession in the second half but their final ball and crossing on the evening was wasteful. Alloa still always looked a threat on the break and indeed the best opportunity to a goal came when Ben stirling making his home debut rose to meet a high cross ball and looked netbound until a fantastic save by Benjamin Siegriest in the United goal.
The draw means that Alloa extended their league form to six games without a defeat and two back to back clean sheets and extend our 66 year unbeaten home record against Dundee United.

Robbie Deas header is cleared off the line 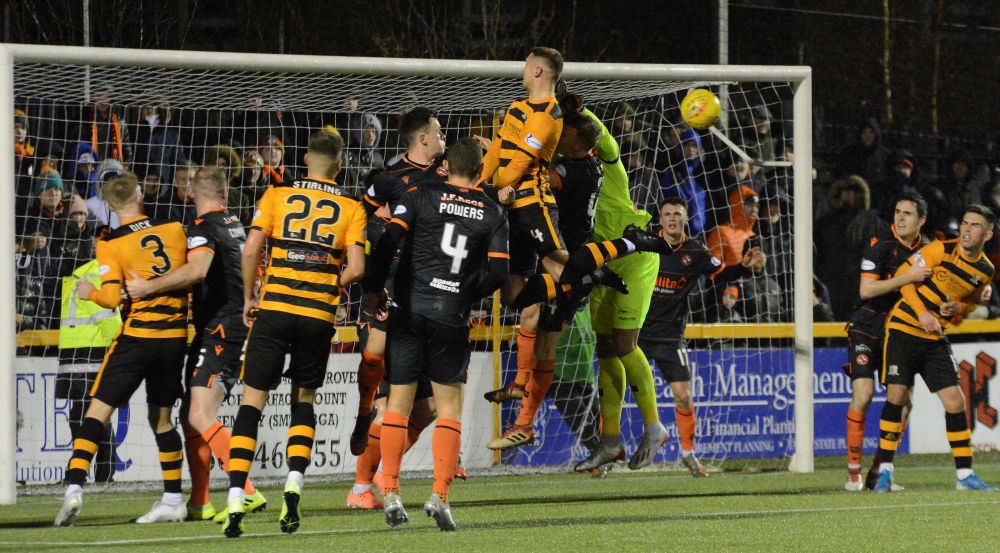 Fantastic save by United keeper to secure a draw

Calum Butcher tries to get to grips with Kevin Cawley.