Jim Goodwin and his Alloa Athletic players know that league points will be hard to collect in the cHampionship this season, but nobody could deny “The Wasps” should have collected three points against Dundee United on Saturday.

This was the first league meeting between the clubs since Season 1959/60 when Alloa won 3-2 and although many have not given the part-time club any paudits this season, they have already proved they will be a match for ant side this season.

“The Wasps” started the game well and took the game to their full time ex Premier League opponents and could have been ahead within the first 20 minutes which they were on top. This was the first time this season Alloa were able to field a full squad including having a full seven players on the bench strenghened by the signing of Sam Roscoe from Aberdeen and Connor Shields from Sunderland on loan.

Against the run of play Dundee United took the lead when Paul watson headed home for his third goal in two games. Jim Goodwin’s men did not let this trouble them and Iain Flannigan went close with free kick off the cross bar

Then with nine minutes left “The Wasps” got the goal their play deserved, Iain Flannigan firing home a peach of a free kick after Dario Zanatta had been fouled by Stuart Murdoch.

Again the Alloa Athletic players had showed great character getting back into the game but they could not find a winner as United hold on, but on chances and opportunities this was two points which would have been so welcome and deserved. 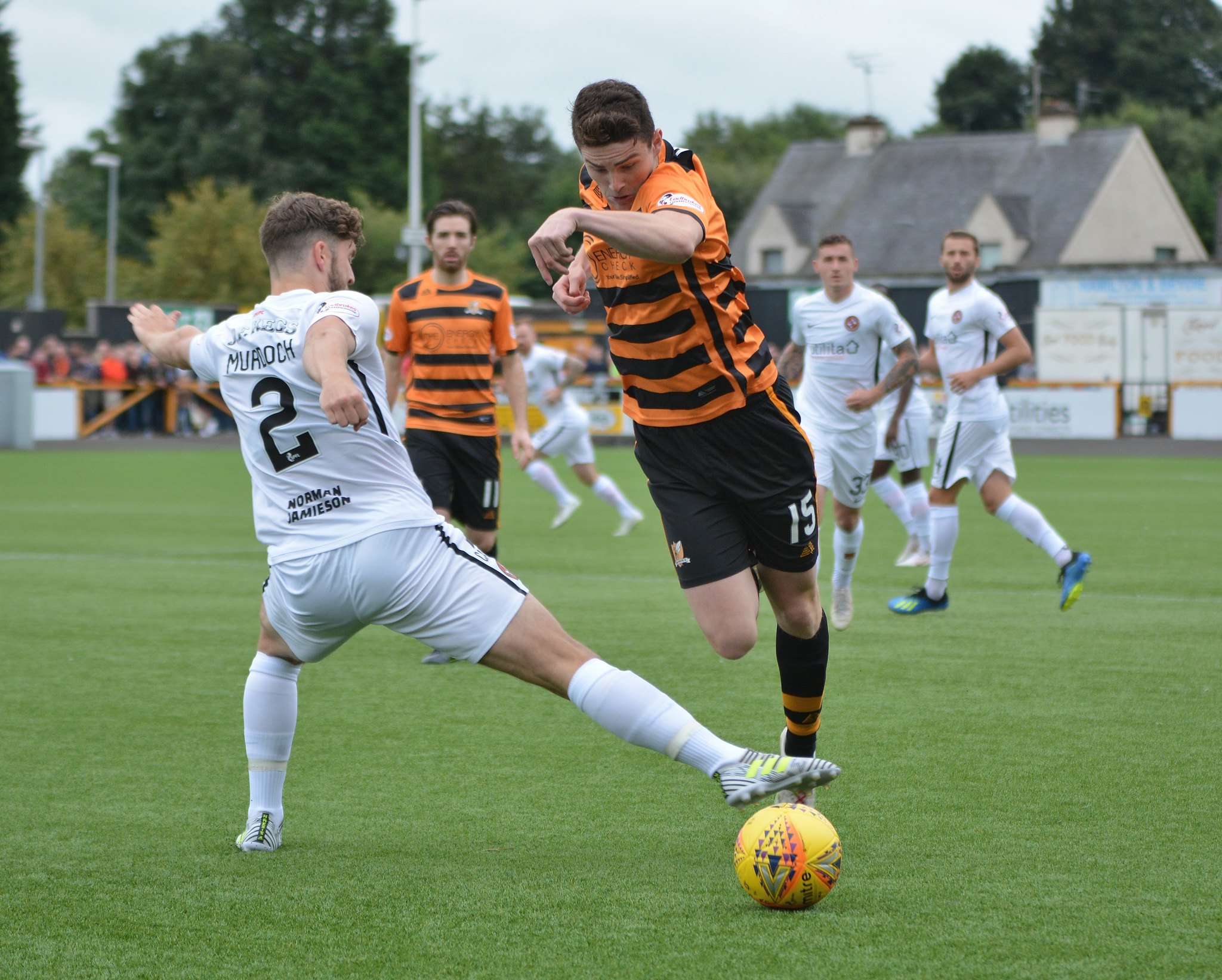 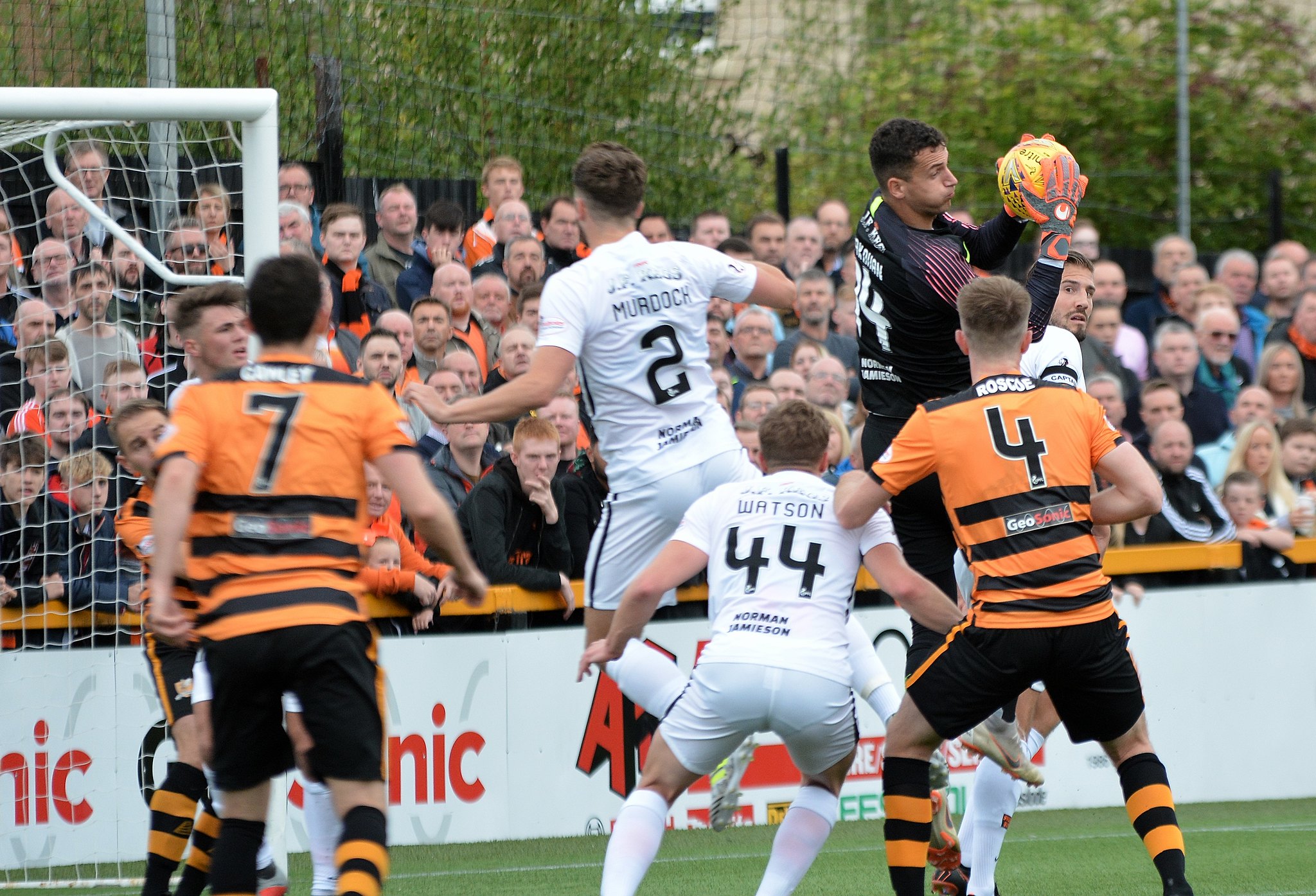 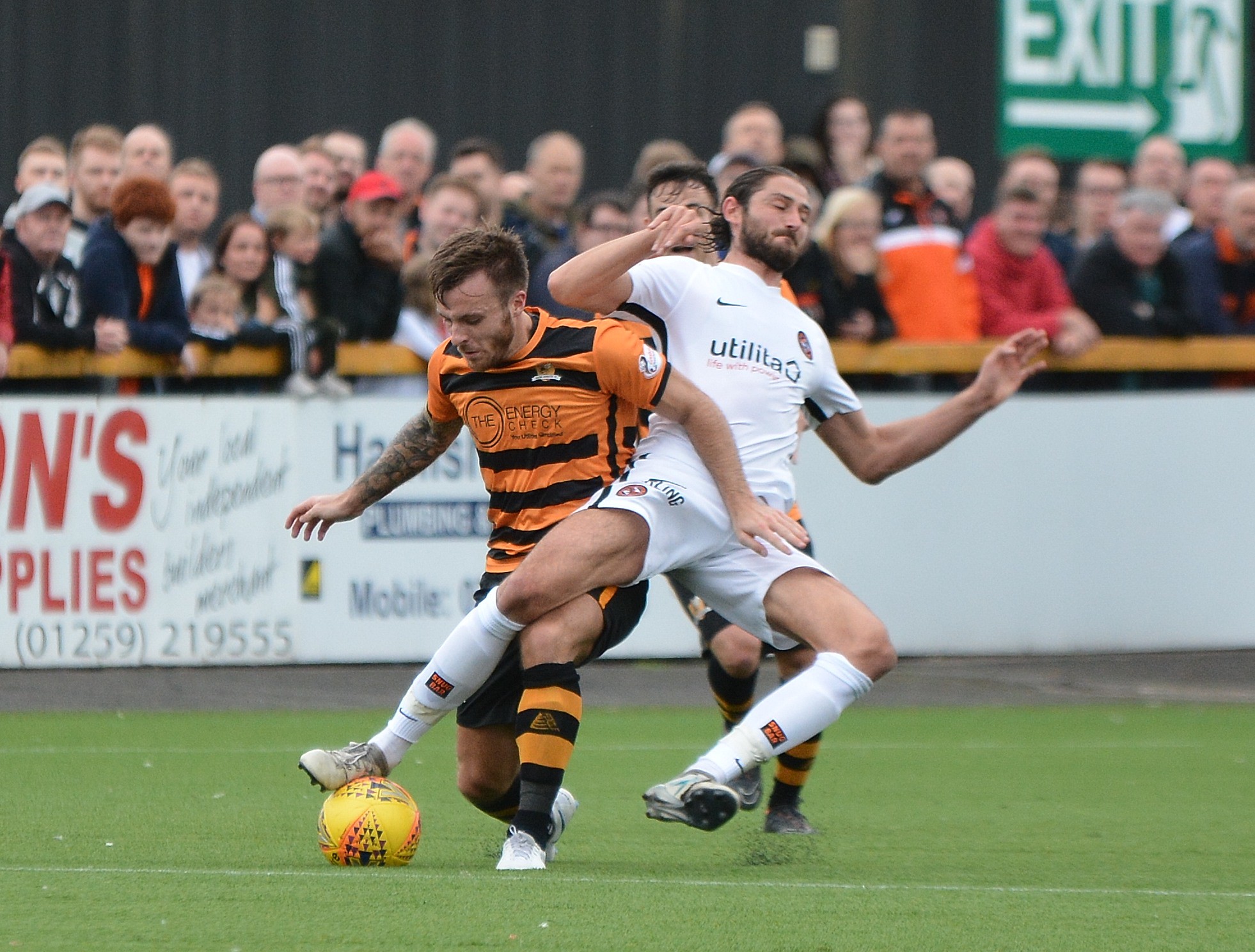 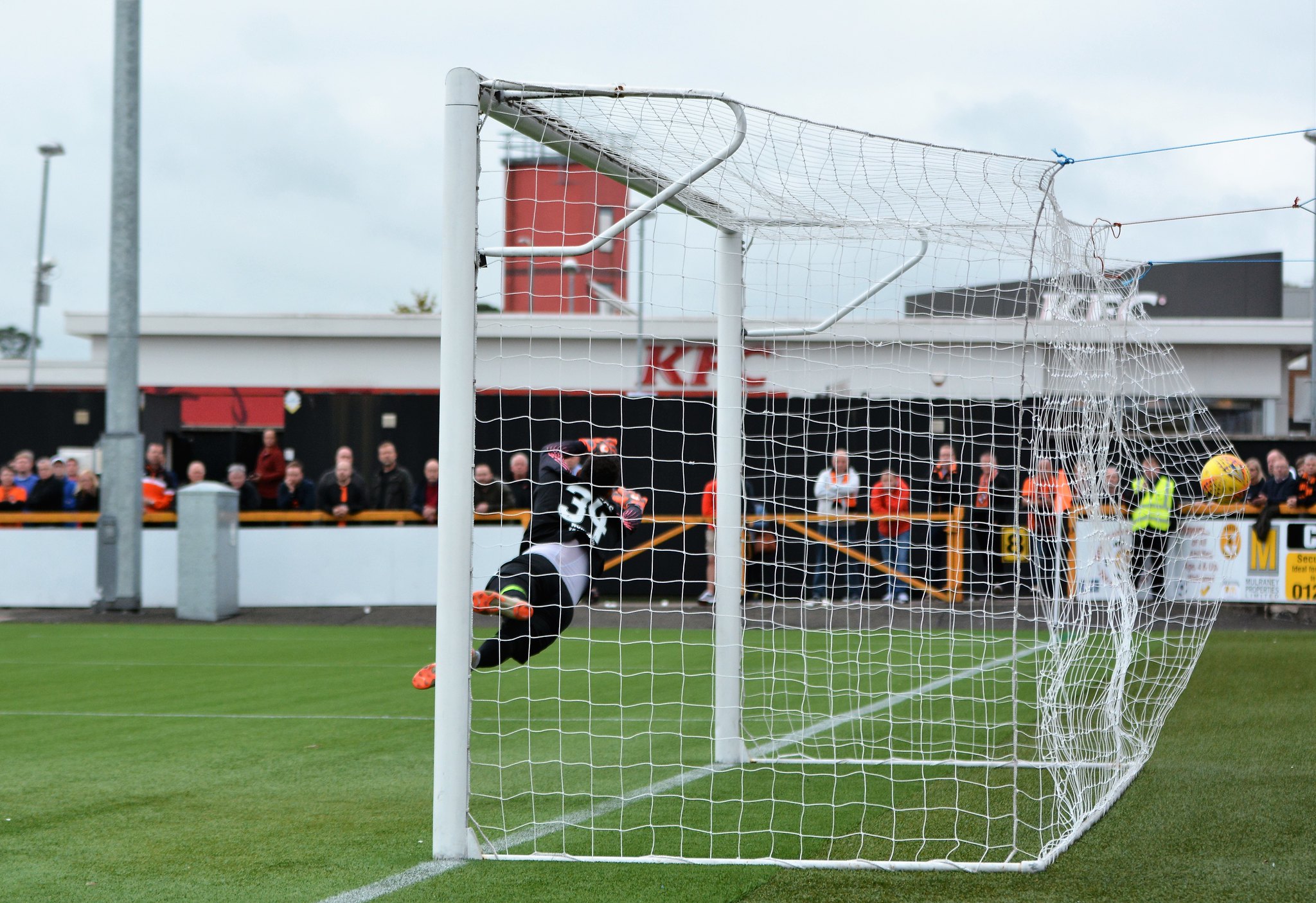 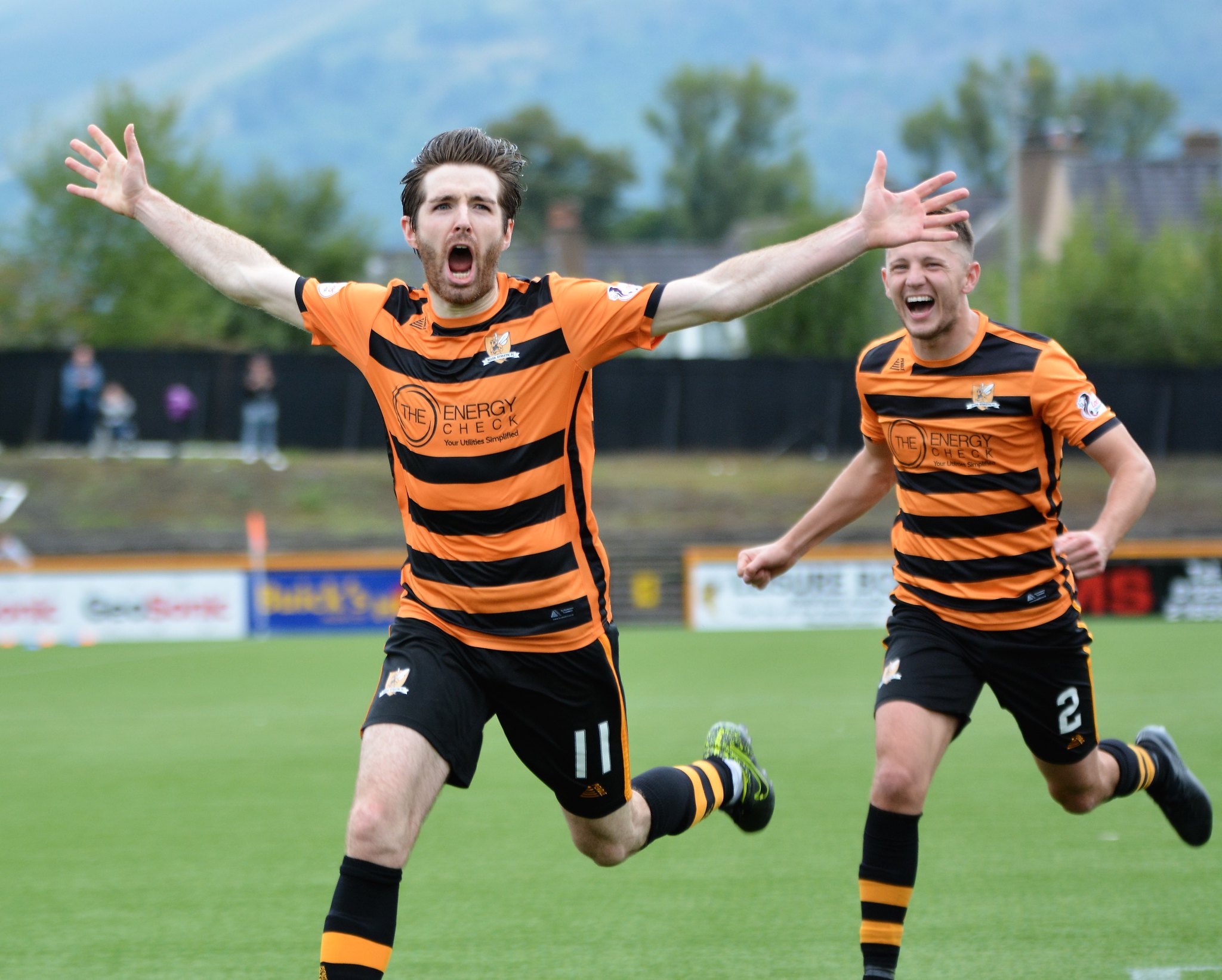 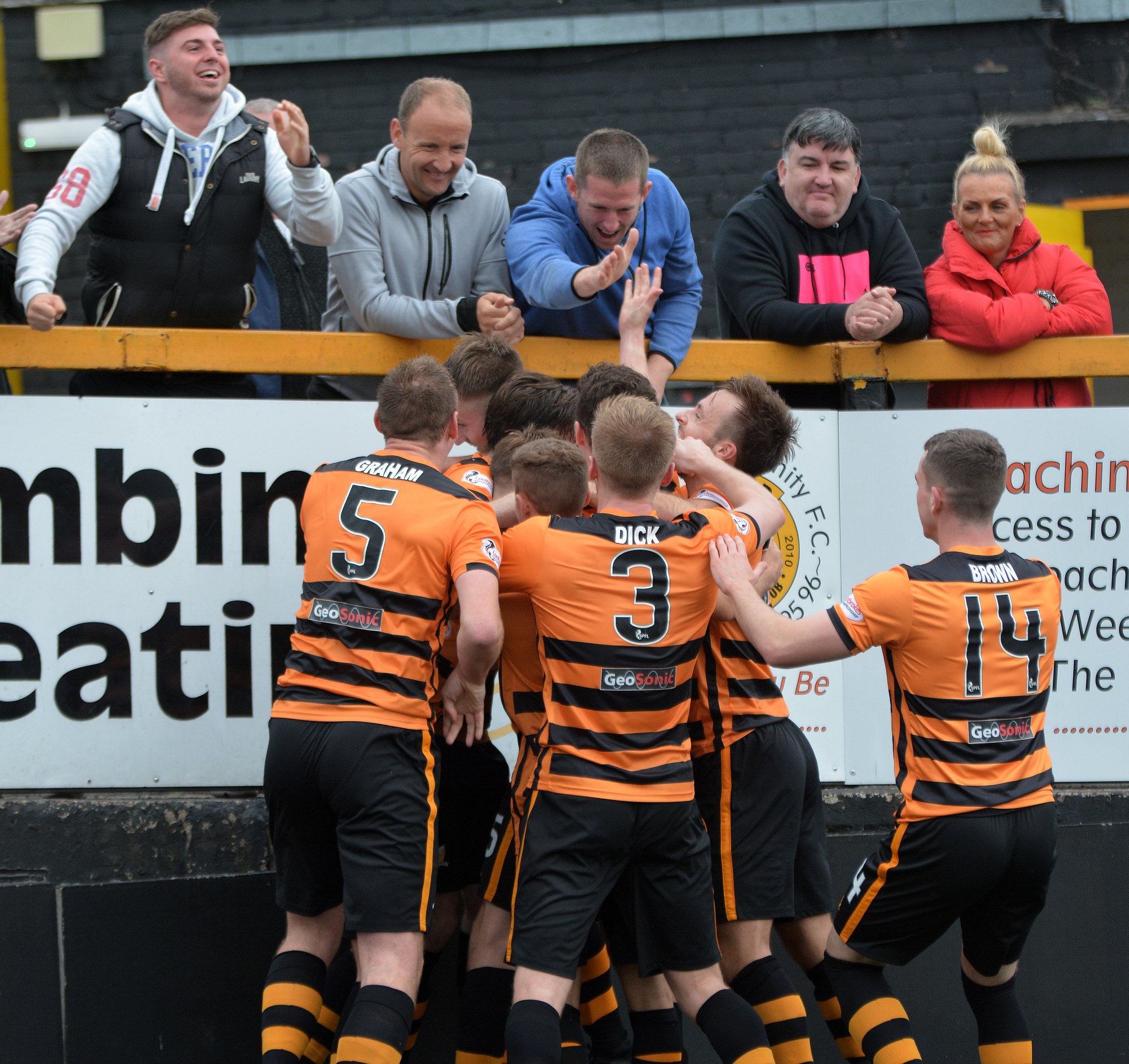 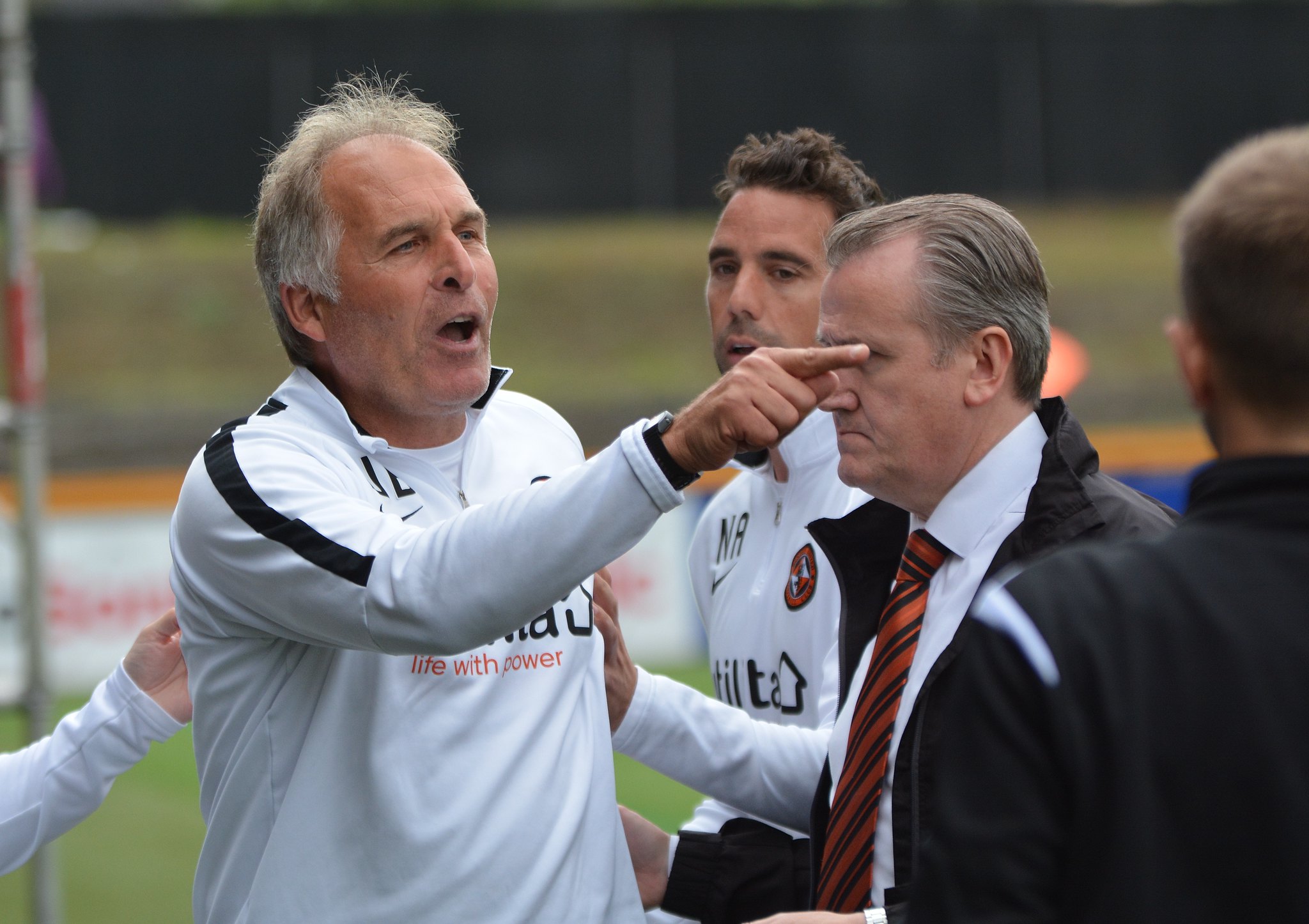 My thoughts on the game are I am slightly disappointed to be honest, I think that is testament to my players, because I feel it is two points dropped. I think anybody who was at the game today would have seen we were on top and I have spoken to one or two of their staff members and they felt we should have won the game as well. It is down to the players, people talk about us being part-time and people have written us off and they expect us to finish bottom of the league but I genuinely believe we have a group of players who are good enough to compete in this league and in the games we have played up till now barring the Ross County game at the start, I think we have been in every game, we conceded a late goal against Ross County but Ross County were the better team on the day and deserved to win the game, Morton here there were nothing between us, Inverness last Saturday we get a draw again not a great deal between the teams and today I felt we were the better team, and I’m not being disrespectful to Dundee United, I think they are a good side they have some very good players but over the whole piece we were camped in their half in the second half and the opening twenty minutes, they were hanging on at the end a wee bit in the last couple of minutes but that is just natural because we all know how valuable points are in this league. We hit the crossbar, worked their keeper a number of times in the second half, my only frustration is when we get into good areas in the final third of the pitch we need to show a little bit more quality with our final ball and be more clinical in front of goal.

Nobody can question our character, last Saturday at Inverness after going down to ten men and again today going behind when we were on top, it would be easy to think it is just not going to be our day, especially today having been on top for so long. I think that is the killer thing being a player, when you have dominated the game and just can’t buy a goal then the opposition go and score with a set piece. We did a lot of work during the week because Dundee United are a very big side, they clearly work hard on their set plays, any free kick from a wide area or a corner, their four big lads are coming up from the back and that’s Paul Watson scored three goals in his last two games all from set plays. They are very good at that and we are not the biggest of teams and it is a concern at the moment it is something to us that has been happening to often. I don’t mind if teams cut us open and score a great goal like the boy Chris Millar for Morton you have to hold your hands up and pat them on the back but we are gifting teams goals at the moment.

What a fantastic goal from Iain Flannigan, if there is a man you want to stand over a pressure moment in the game it is “Flanny”, he did the same with the late penalty at Inverness and today the quality he has to get the free kick up and over the wall into the top corner, the goalkeeper had no chance and he had already hit the crossbar a few minutes before that. I should be more satisfied with the point, before the game if you had offered me the draw I probably would have took it but looking back at the game and thinking about the chances we had the amount of possession we had I really genuinely feel as if its two points dropped.

It’s great to have options now in the squad for far too long in pre season and the opening part of this season we have had only 14 players in the squad and it was important that we strengthened the squad in those areas and we now have great options off the bench, the hard part now is picking an eleven because you know you are going to disappoint players very week, there are players on the bench who didn’t get on today and I know they will be disappointed but they have to stay strong and stick with the group because I now have options to change formations and it’s a good place for a manager to be. There needs to be competition for places anyway, nobody should be guaranteed a place in the team and the guys that are in the team need to know that if they drop below par there is somebody waiting in the wings to take their place.