The Wasps were victorious at Tannadice, winning 4-3 on penalties, but their second half display was worthy of victory within the ninety minutes, by the end of the game it was Dundee United who were hanging on with “The Wasps” going so close to clinching the winning goal

In was Jim Goodwin’s side who started the match the brightest with the Dundee United team looking very nervous. Greig spence flicking an effort into the side netting. United did look dangerous at set pieces in the box and Nicky Clark was unfortunate with a header which struck the woodwork before Frederic Frans bulleted a header past Neil Parry to give the home side the lead. Csaba Laszlo then watched his side have their best spell in the game, although Alan trouten nearly caught their keeper out of his goal prior to half time.
In the second half “The Wasps” took the game to their opponents showing great spirit and never gave up. They got their reward with eleven minutes left when Jake Hastie, who had been a torn in the flesh of the Dundee United defence with Frederic Frans giving away the penalty.

Alloa keep on going “Keeping Believing” and could have won the game in the regulation 90 minutes. Jake Hastie again broke into the United box and was brought down, but on this ocassion the referee awarded a free kick on the edge of the box.
“The Wasps” were faultless in their execution of the penalties:-
0 – 0  Stewart Murdoch – penalty saved
1 – 0  Scott Taggart – great way to celebrate 100th appearance
1 – 1  Fraser Aird scores
2 – 1  Greig Spence – great confidence and finish
2 – 2  Adam Barton draws game level again
3 – 2  Iain Flannigan – bottom corner finish
3 – 3  Declan Glass – did well in 2nd half
4 – 3  Alan Trouten – 2nd penalty converted in game
4 – 3  Paul McMullan penalty saved 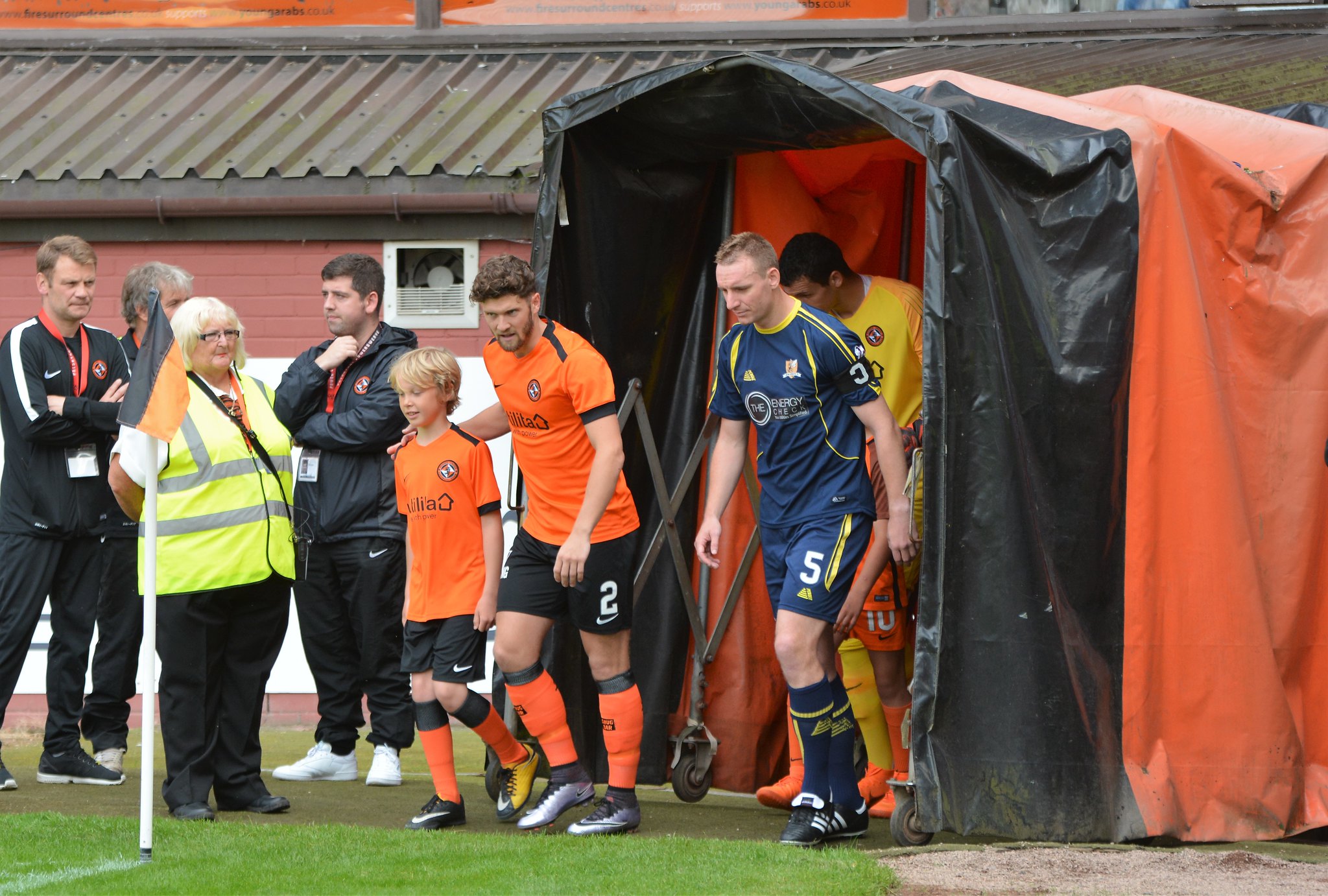 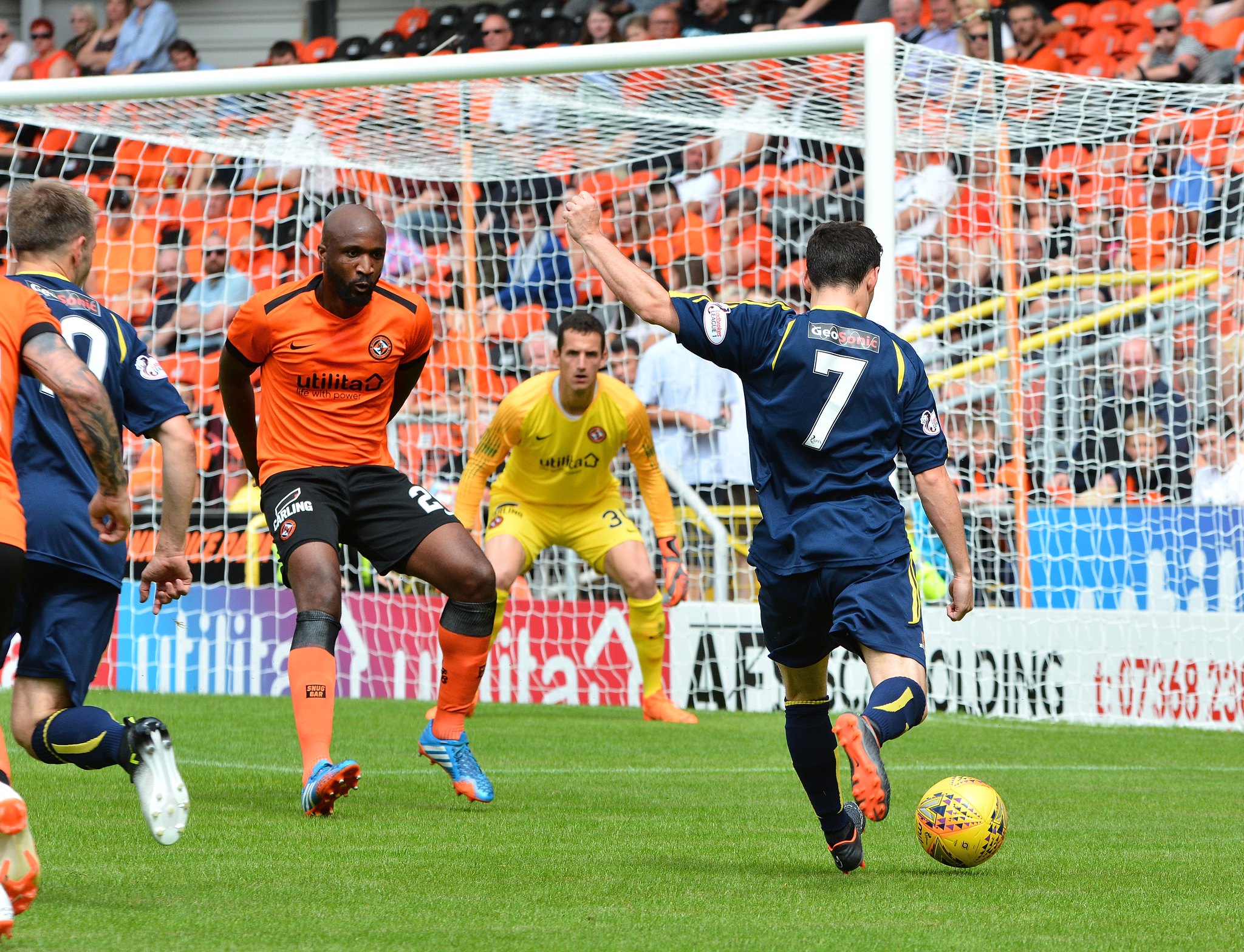 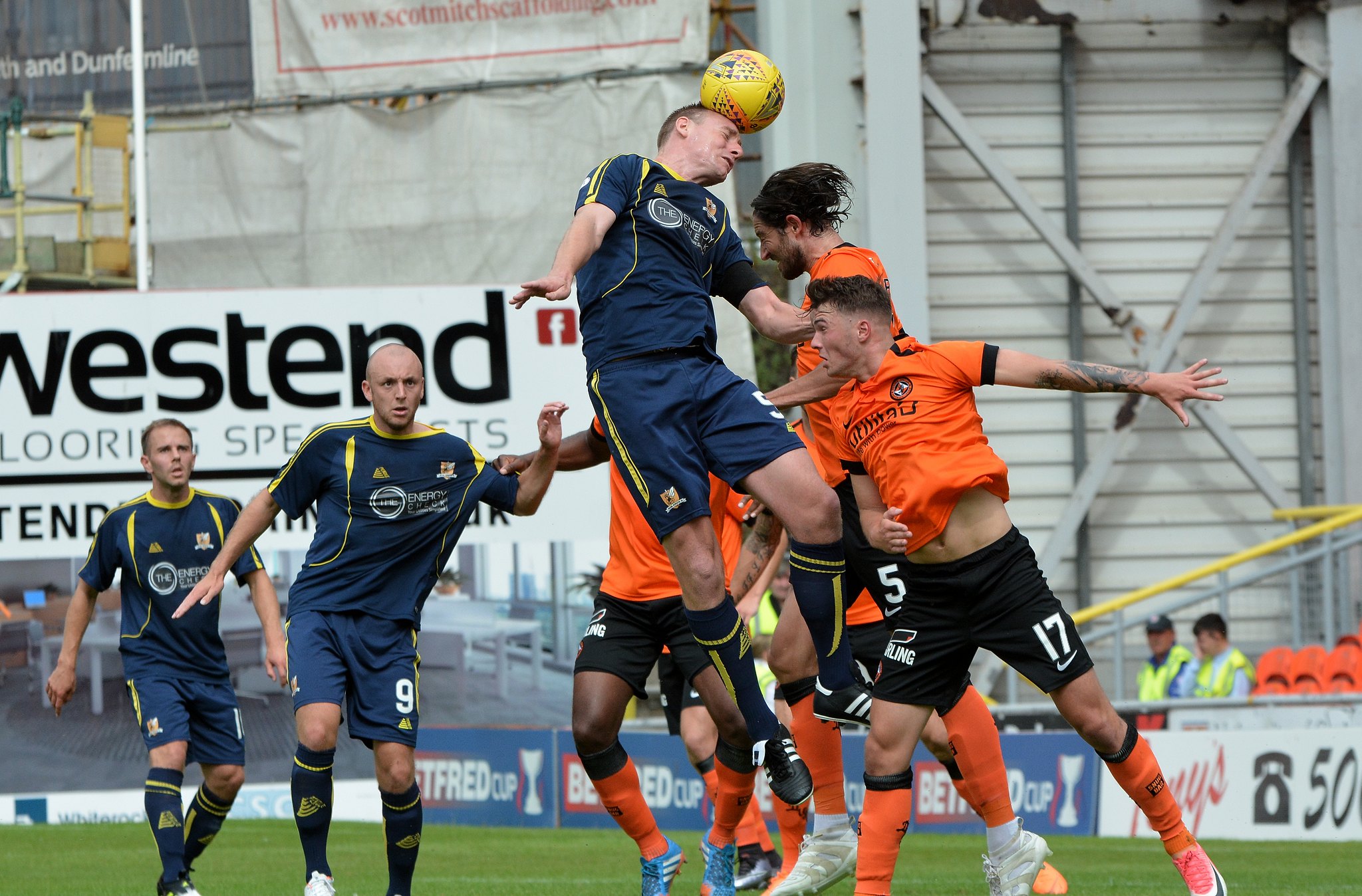 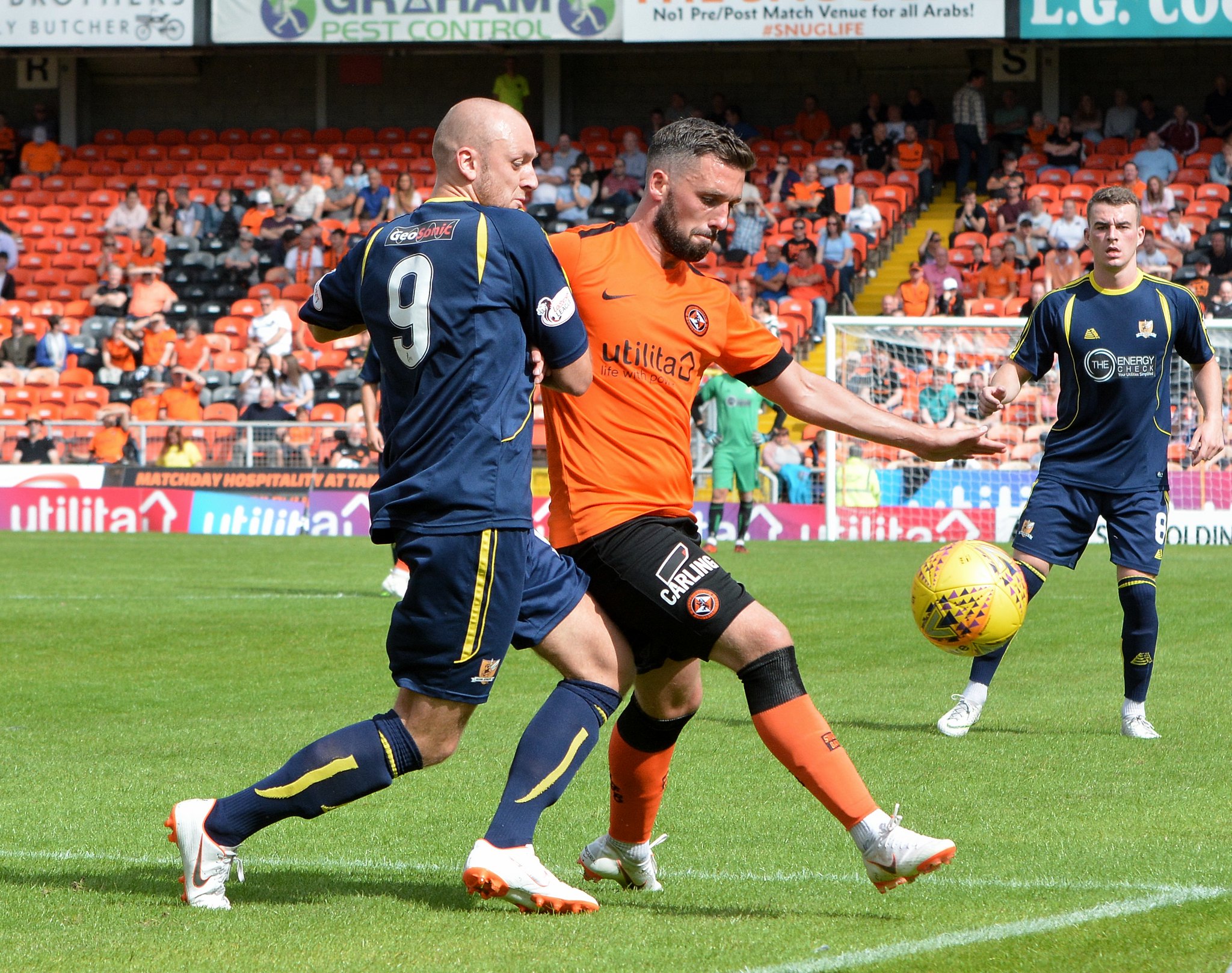 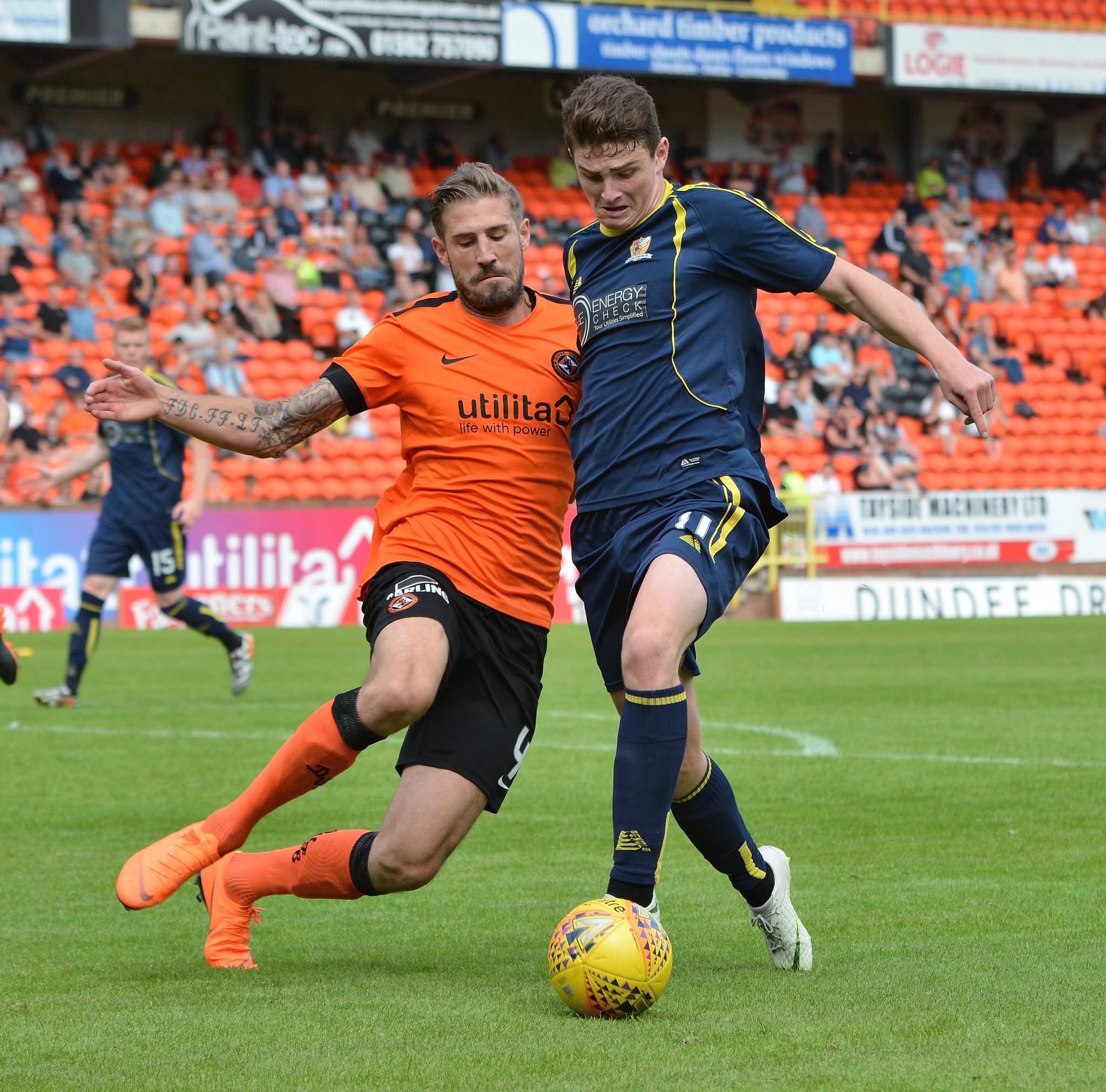 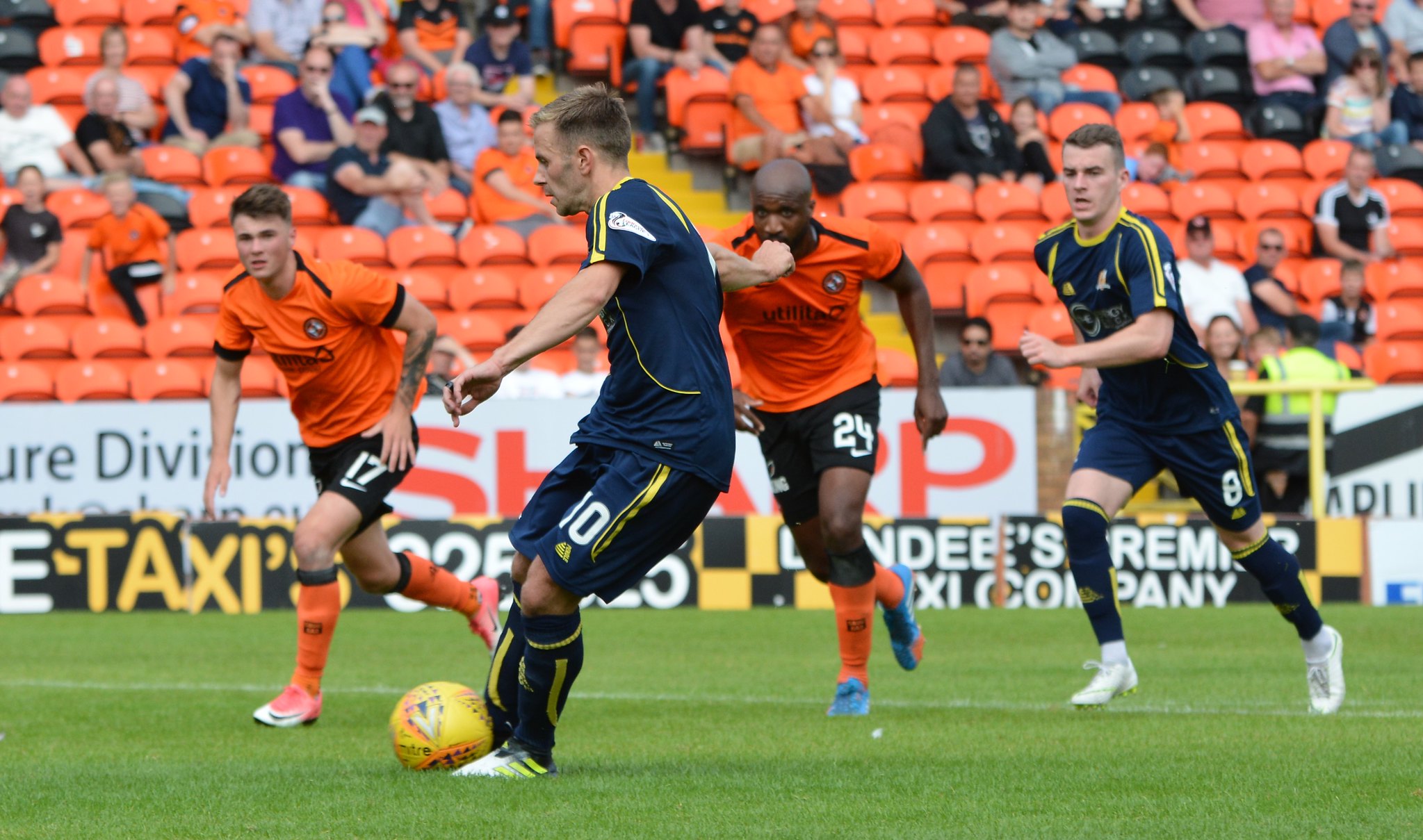 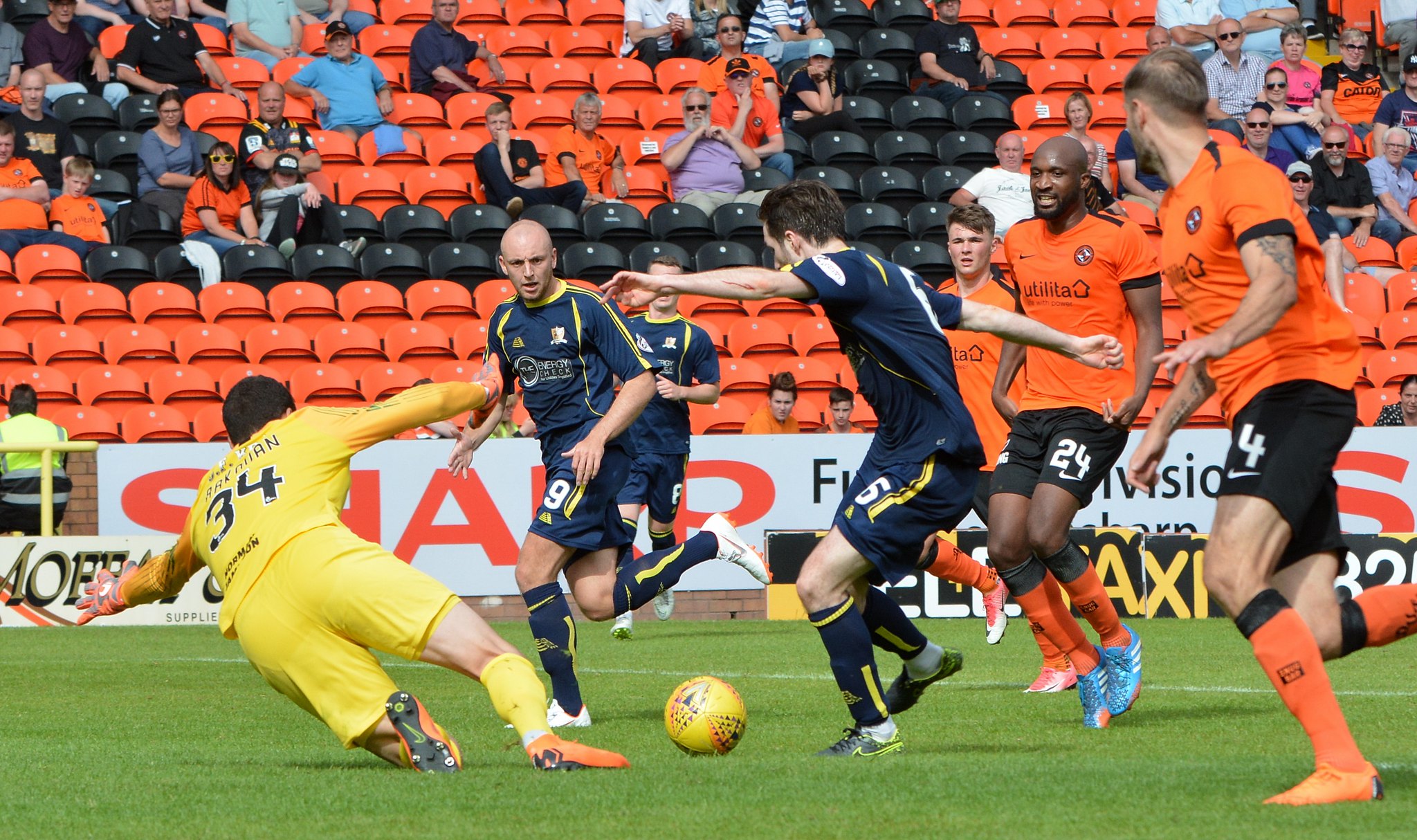 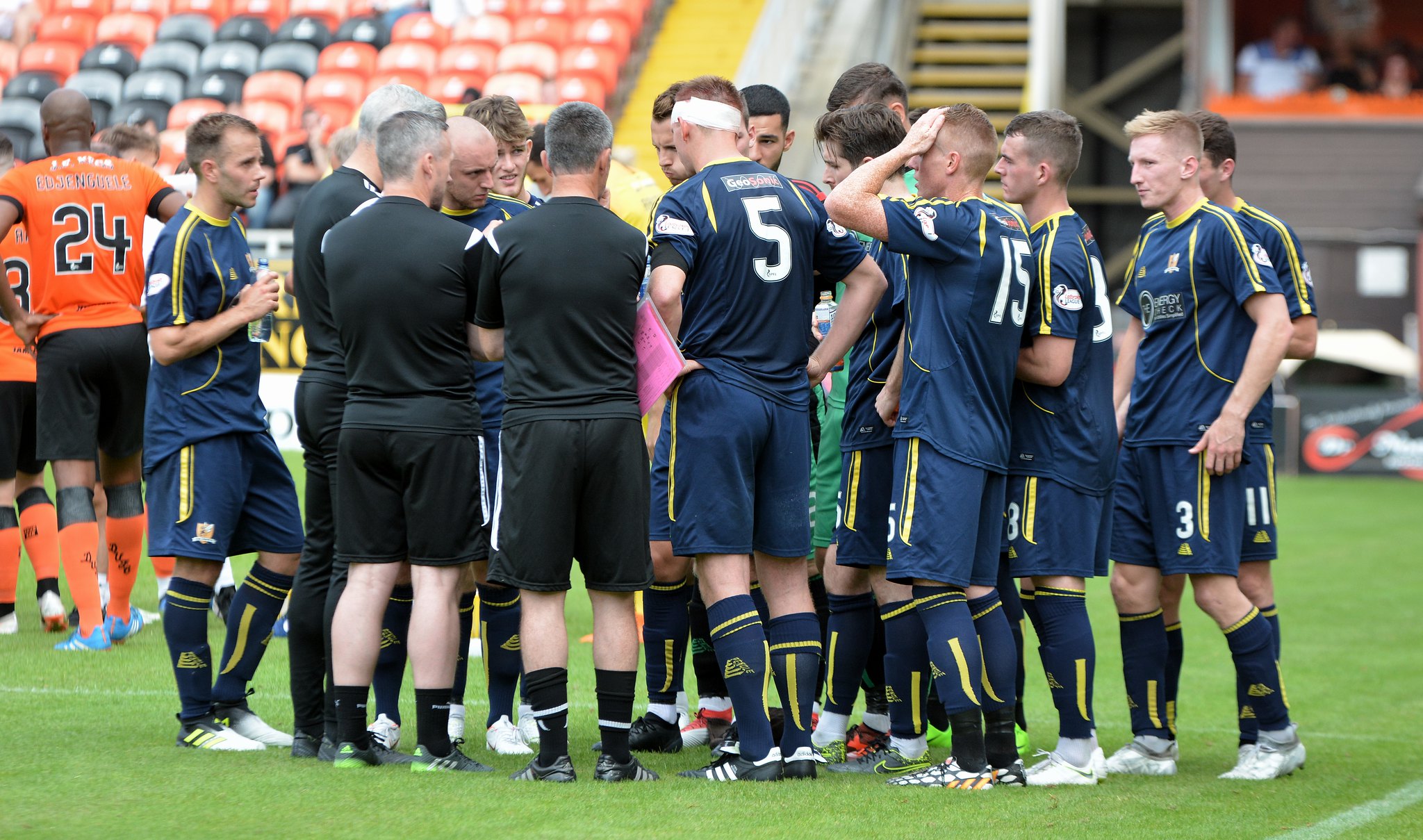 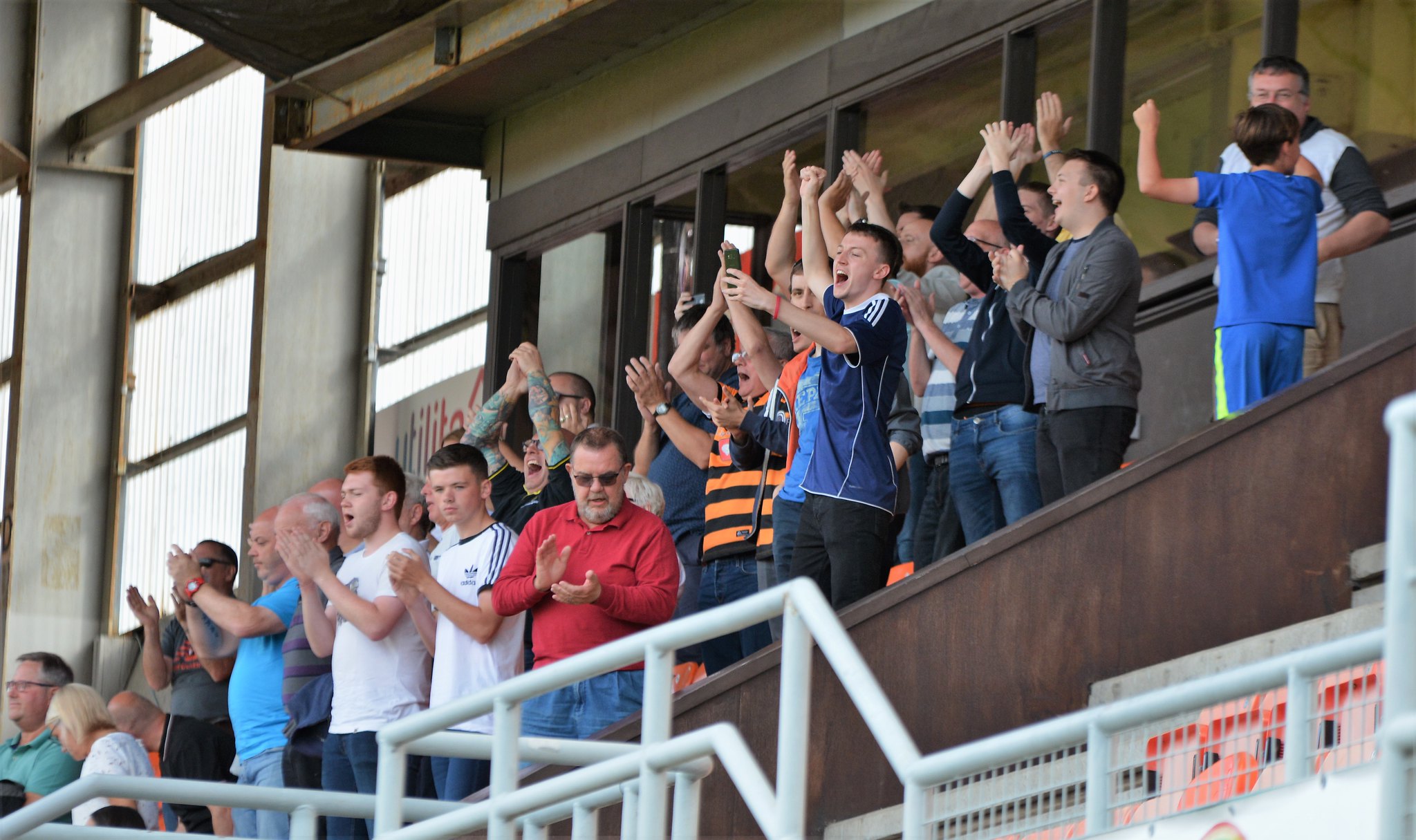 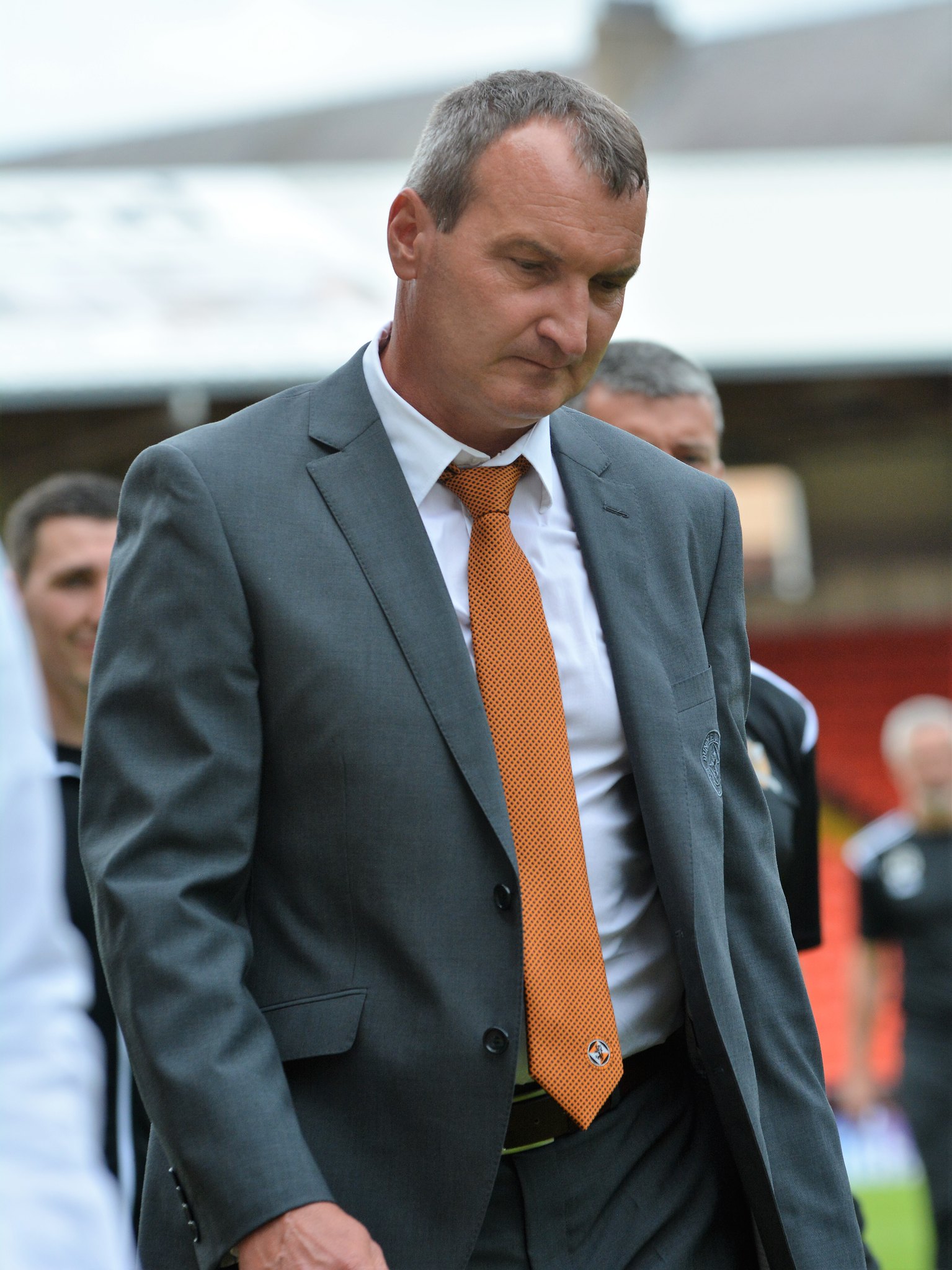 I was really pleased with the overall performance, there was a spell after about twenty minutes of the first half I felt Dundee United were on top and they were on top for about ten minutes in that spell and they looked dangerous, but over the whole piece I thought the game plan was brilliant the boys carried it out to the letter, pressing them high, we knew they wanted to play out from the back, we went and locked on and caused them to make mistakes and kick the ball out the park and it eventually they started after ten minutes going long from their goalkeeper and played into our hands to be honest with Zac and Andy going to compete with Nicky Clark and compete for second balls. Early on in the game we had a number of chances I felt as well, half chances if you like, not clear cut chances but we certainly had the better of the early part of the game.

The goal against is disappointing, it was a fantastic ball in from Fraser Aird and it is “Land of the Giants” with United’s centre backs six feet four and the big boy Adam Barton in the middle of the park, we’re not that big a team so that was always going to be a danger for us, we were disappointed to lose that goal in that manner but second half I thought we were excellent. We came out and really went for it, Jake Hastie in particular, I don’t like singling boys out but in particular a young 19 year old who really took the game to Dundee United and he caused their right back all sorts of problems and for me I thought he should have had a second penalty as well, and that maybe goes and kills the game and we could have gone back down the road with three points instead of two.

I’m not having a go at the referee, I really like Steven he is one of the better referee’s in the country and a really good guy as well so I’m not going to argue over six inches but for me it was on the line and if it’s on the line it’s in the box that’s the rules. I thought it was a penalty but it doesn’t matter we will take two points at a difficult place to come, I think it is 40 or 50 years since Alloa last won at Tannadice, but we came here to win a game of football, to get that monkey off our back if we had scored the second penalty, but it was not to be, I thought the quality of the penalties in the shoot out were unbelievable – Taggart’s top corner, Spenny top corner, so really good quality penalty kicks, but big Neilly will get all the credit for the saves that he makes. The players put themselves forward and backed themselves, they have that confidence to go and do it, but I thought it was strange when we went and took penalties into an empty stand, I don’t understand that, I thought the games is about entertainment for the fans, so why take the penalties 100 yards down the park into an empty stand?

It was a great afternoon for us, it puts us in a really good position, we now go up to Elgin on Tuesday night, the boys will need to recover well because as you can see we are a very tight bunch very low on numbers at the moment, so we need the boys to recover properly and go and have another difficult game at Elgin in midweek and only if we win that it puts us in a good position.