It was “The Wasps” who took all the plaudits at Tannadice on Saturday, indeed it was the visitors who created the best scoring chances in the match and deserved better than a 3-1 score line – only going behind to their second contentious penalty in a week, having also suffered losing the opening goal the previous Saturday at Airdrie under similar circumstances.

“The Wasps” had a great opportunity to take the lead after 23 minutes when Daryll Meggatt passed the ball inside to the lively Kevin Cawley, but his shot went inches past the post.

“The Wasps” were pushing forward at every opportunity and looked dangerous on the break. Indeed before half-time they had another two great chances to open the scoring, Iain Flannigan went close with a free kick before a minute prior to half-time Alan Cook broke through but his shot went high and wide.

Although at times Dundee United had periods of pressure they didn’t create much in front of goal. Scoring the first goal in matches is so crucial and it was the home side who took the lead in 72 minutes when Andy Graham was ajudged to have fouled Patrick N’Yoti who slotted home the resultant penalty kick. Unfortunately for “The Wasps” Andy Graham had to be replaced with a shoulder injury but the introduction of Adam Martin was the catalyst for “The Wasps” best period in the game. He battled to gain possession on the wing and set up the equaliser for Kevin Cawley.

Kris Renton then had a great chance to win the match but could not be clinical enough in final third of park having battled hard to get the opportunity. There was no doubt Alloa were finishing the stronger although the game looked destined for extra time Dundee United scored twice in time added on – it was a scoreline that not even the United supporters watched could have imagined, it flattered them and was very hash on what was an excellent performance from Jim Goodwin’s side who more than matched their full time opponents. 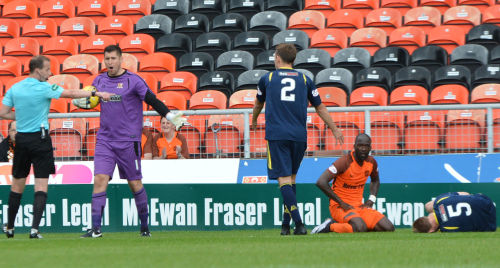 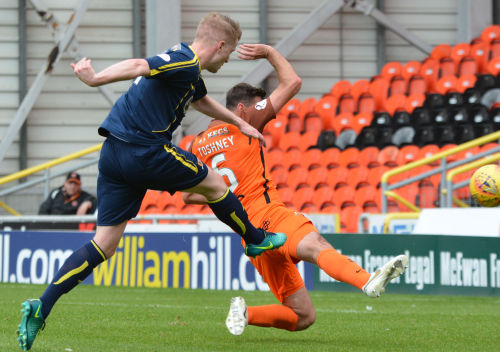 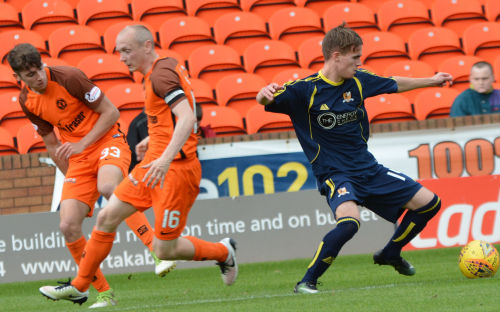 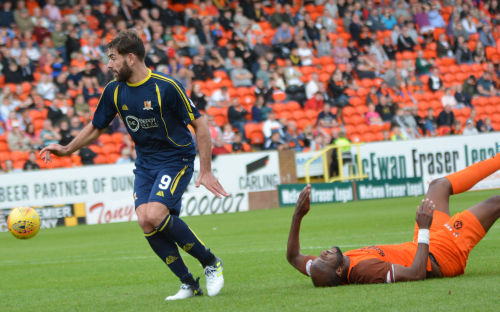 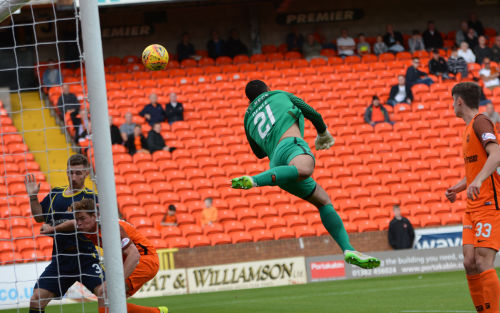 Wasps pile on pressure near end of game 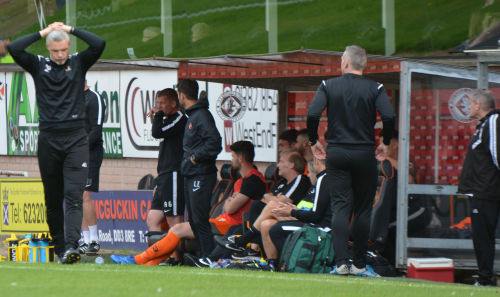 Willie, said he touched the ball but he just carried on a wee bit after it, he said he got the ball first but then the man, but I think momentum just takes you into the man, doesn’t it, he clearly got the ball I just hope the footage shows it that way, it might have been a difficult angle for the camera – but it is what it is, I thought Willie Collum had a decent game overall but he does like to give a penalty, we know that and he is not frightened to make that call, fair play to him if he got it right I will hold my hands up but from where I was standing it looked very soft.

However our boys showed great character after that, we can’t complain with their reaction, it would have been very easy to feel sorry for ourselves and Dundee United go and get another one, but wee Adam Martin comes off the bench and makes the kind of impact he has been doing lately, he is a terrific young talent we have got and he does great for the goal down the right side and has that kind of awareness to lift his head and see Kevin Cawley on the edge of the box, I thought it was a great finish from Kevin and at that stage in the game we were thinking we can go on and win the game, I thought we became the better team.

I’m really pleased we could show what type of a team we are and what we are capable of because we haven’t quite been at the levels we are capable of in the league with only managing to pick up four points from four games, that is a disappointing return but if we put in more performances like today then the league campaign will take care of itself. There was loads of positives to take from today’s game I thought we more than matched Dundee United for long spells in the game, it wasn’t like we came here and parked the bus, we had a game plan in mind and we were willing to give up a wee bit of territory at the back and leave our two central halves on it, but we were capable of hitting them on the break and counterattacks and I thought we did that on numerous occasions particularly in the first half we got in on Alan Cook’s side but we need to be more clinical in front of goal and if we take our chances we will be absolutely fine, overall I’m really disappointed with the final score today because I don’t think at any time it looked like a 3-1 score line for us to concede in the 91st & 93rd minutes was a bit of a sickening score line from our point of view – the lads deserved better that that.

Andy Graham’s injury looks a bad one the initial reaction is it is his shoulder, we will just need to wait and see how bad it is, he is going to see the doctor just now, the Dundee United doctor is going to have a look at him but he will probably need to go for an x ray or scan.