Playing in front of the BBC TV Cameras on Friday evening, Alloa Athletic proved just how good a team they can be and thoroughly deserved their victory and all three points against league leaders, Dundee United.

The winning goal came as early as the 18th minute and was a joy to watch, not just for the supporters at the Indodrill Stadium but in front of all the people watching live on BBC Scotland.

Scott Taggart played a slide rule pass inside Dundee United defender Liam Smith and played in Kevin Cawley, who cut the ball back across the face of the box for Kevin O’Hara to score past United keeper Benjamin Siegrist.

The Wasps were on top in the first half and should have gone further ahead, only a last ditch block by Troy Brown denied Iain Flannigan while Adam Brown had a shot saved and Kevin O’Hara shot just curled over the bar.

In the second half Dundee United had more possession and pressure but Alloa stood their ground, concentrated and were very competitive and always looked dangerous on the break with Adam Brown and Kevin O’Hara stretching the United defence.

Indeed United keeper Benjamin Siegrist allowed a Mark Reynolds passback to go under his foot and he had to scramble back to clear the ball from crossing the line.

Three minutes from the end of the game referee Greg Aitken showed Iain Flannigan a second yellow card on the evening after a foul on substitute Louis Appere but the defence stood resolute for a famous victory. 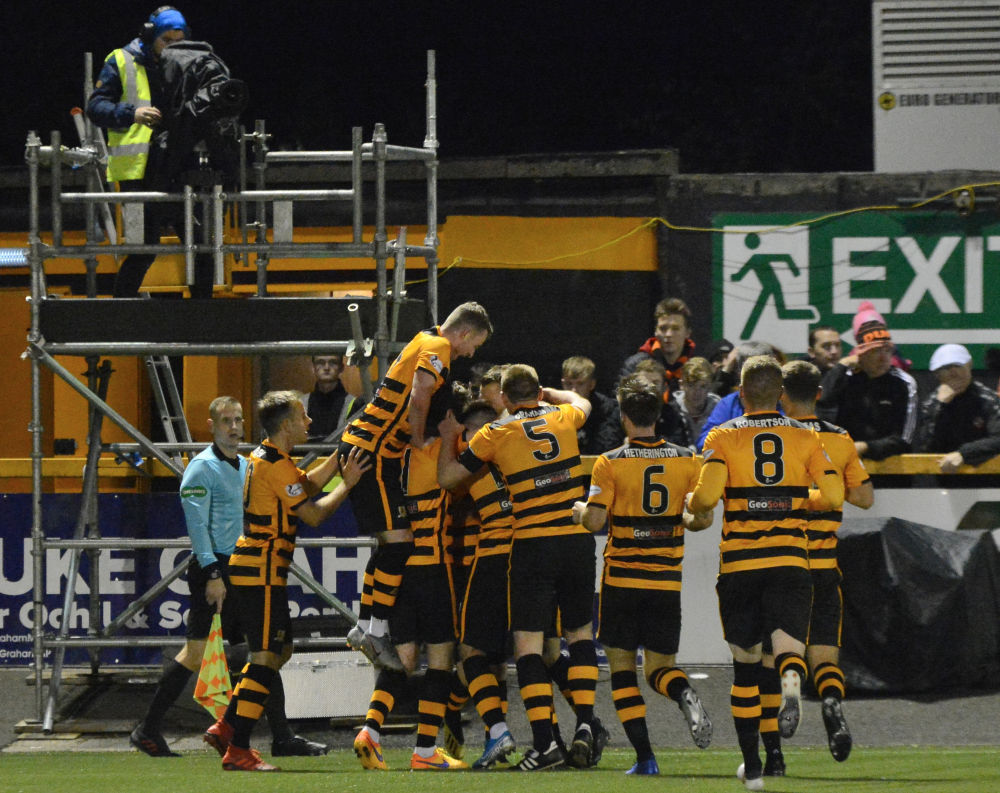 Celebrations in front of TV Cameras 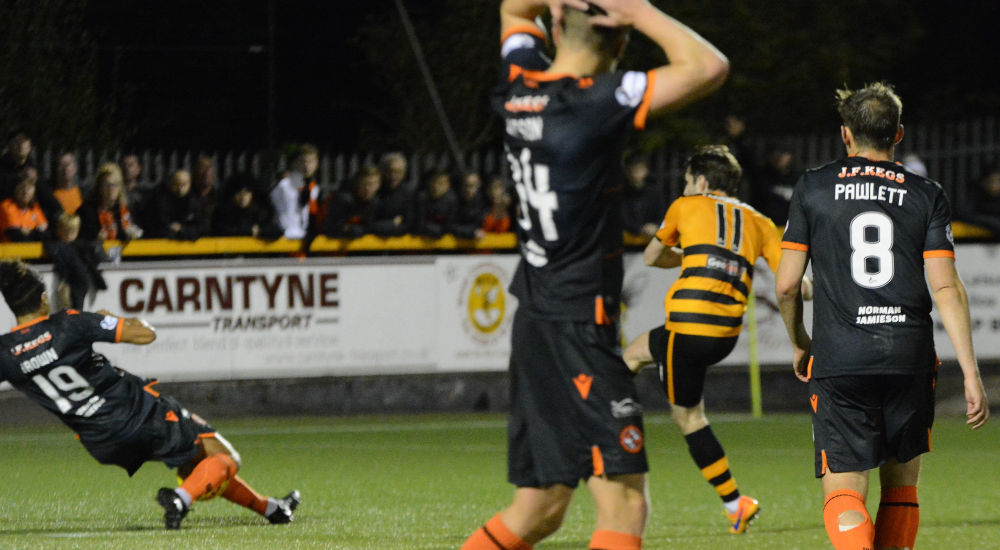 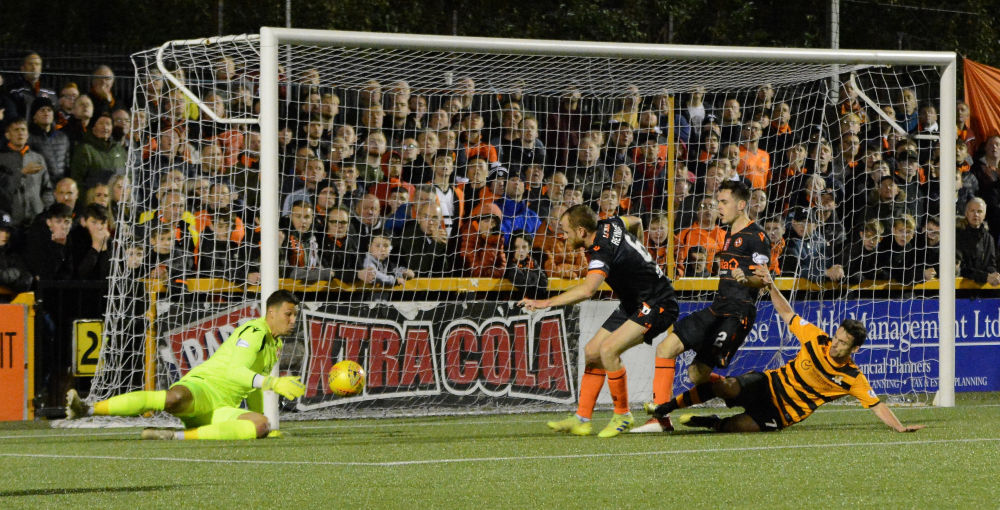 Alloa pile on the pressure 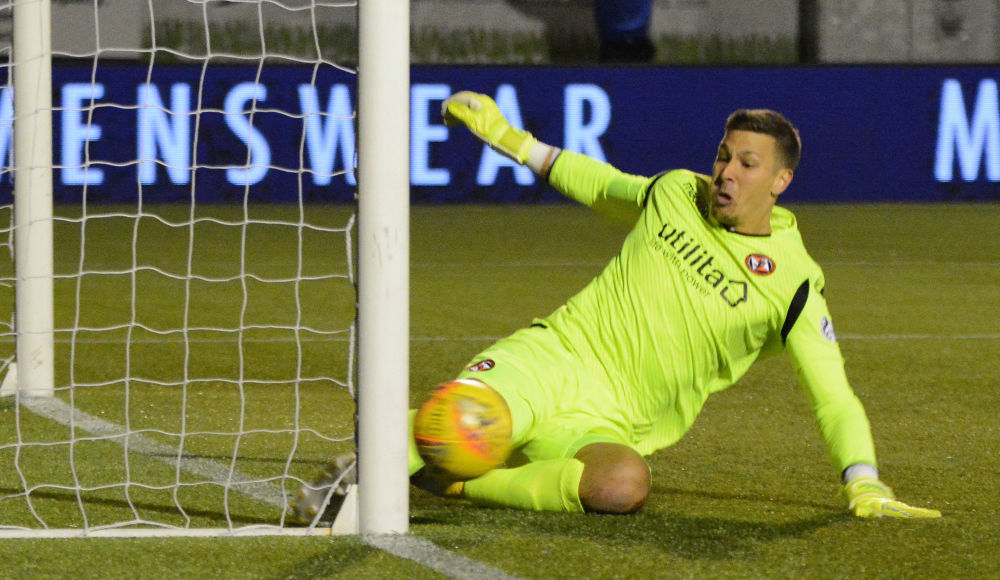 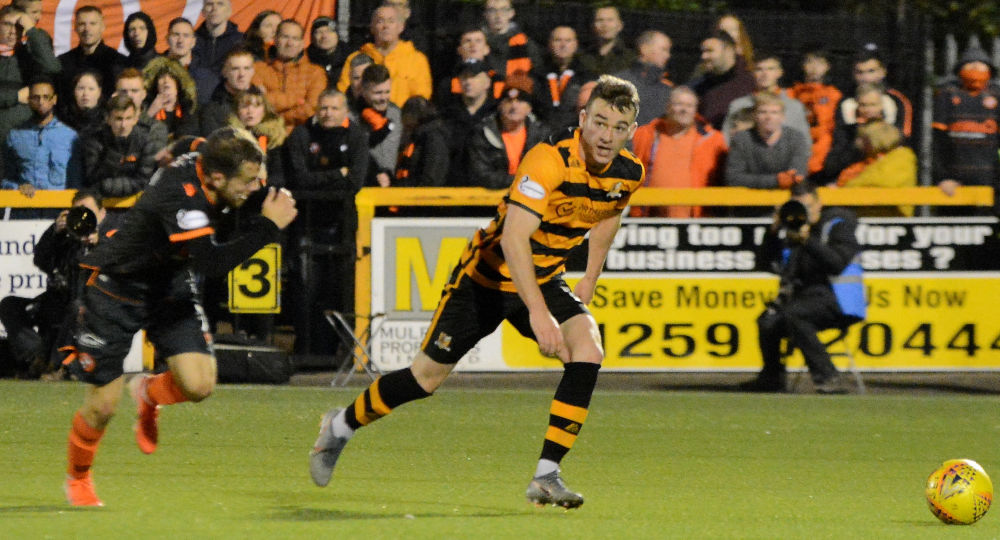 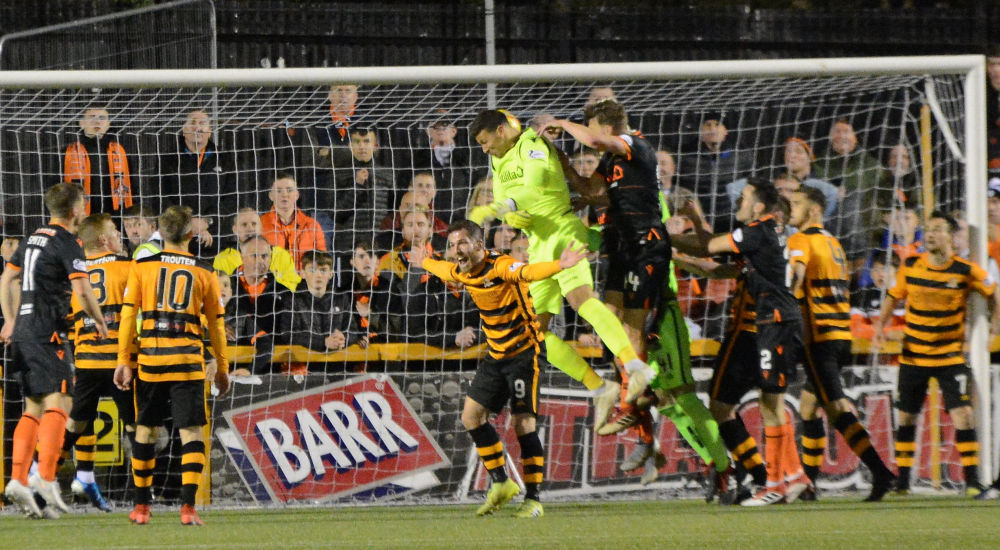 I think anybody who has seen the game might have thought we might have had a couple of other goals in the first half, we know we were played against an excellent side, who can cause you major problems with their very good players, but I have said to people before if they have listened to me, that we have very good players also, or best defenders were our front men and or best attackers were our defenders because they got on the ball used it very well and when didn’t have possession of the ball the strikers worked so hard to put the opposition under pressure and not to let them get easy balls forward. All round I was chuffed with the whole performance, we knew we would be under the cosh at a certain period but I think to a man everybody stood to their guns and concentrated and were committed and competitive and I think that is so important when you are a footballer.

I genuinely thought that we played really well, scored a great goal, but as I said to you we have to respect these players, I know they are part-time and people keep mentioning that fact but they are good players, it is not worth for some of the players to go full-time, because of the jobs they have, you have to respect that these kids can play, I see them training and that’s why I got disappointed after the  Ayr United and Arbroath games, which is no disrespect to them but we didn’t turn up and it’s not because we are part-time, because I see the way they train every week and that’s where the disappointment comes because I can see the way they train and the way they prepare and what you have seen tonight is how they perform in training. They got their just rewards tonight but we have got to make sure we turn this into a fortress, because the results have not been good enough at home, I don’t like to look back but I think it is so important we build on that result tonight because all your home games are your most important games to take three points from because if you lose at home it is not easy to go and win away in this league. Chuffed with tonight but we must move on and start focusing on next week that is the way football is. You will live with this, enjoy your weekend and then we will get back to work on Tuesday night.

Kevin O’Hara has been excellent for me, he is a young man who had probably been out of the game for about a year not playing much football and I had seen him playing with my son at Falkirk and I thought he was too good a talent to loose and I got an opportunity in the summer to talk to him, his big choice did he want to go part-time and he was delighted to do that, he came here and I think he has been excellent for us, he gives us something different, but then you look when Liam Buchanan comes on, he was excellent for us using his experience very well, he is a different type of striker, I have Robert Thomson who I know can effect a game, I have Alan Trouten who has been excellent, so I have four strikers who I think when I have them all fit, I can mix the way we play and I think that is so important and every one of them has had a big effect when they have played for the team so if we can keep them all fit we will be ok.

Lawrence Shankland puts me in mind when I played against Ally McCoist, when you don’t give him a sniff but he still managed to put the ball in the back of the net, so the concentration levels have to be spot on, right from the start to the ninety fifth minute, Lawrence is a terrific player and thoroughly deserves his call up to the Scotland National side, you create him chances and he will score goals it doesn’t matter if is at International level or club level whatever and that’s why when Oli McBurnie gets a lot of criticism, how many chances has he missed? If you miss the chances you have a right for people to criticise you but not when there are no chances created and I thought we defended really well tonight led by Andy Graham but I thought young Robbie Deas a young man learning his trade, Scott Taggart, Jon Robertson who was playing on the opposite side of the pitch tonight through injuries, Jamie MacDonald’s experience also showed tonight, I could go right through the team and it would be unfair not to mention any one player because I thought they were all terrific tonight and it was a thoroughly deserved result.