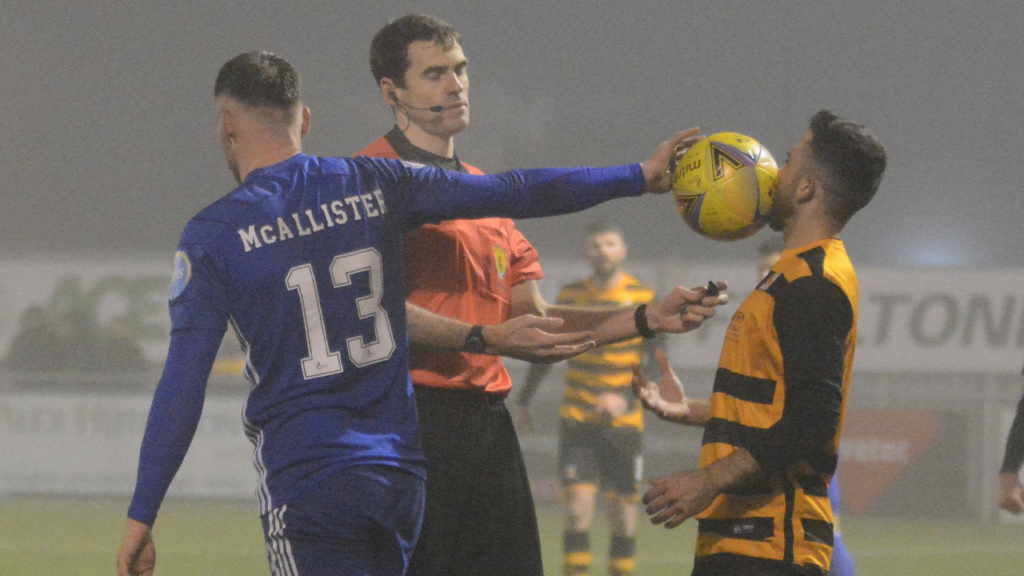 Today’s game seemed in doubt just 15 minutes before kick-off due to the heavy fog but Alloa and Cove played out the contest despite the conditions.

Alloa’s best period came early in the heavily compromised period of visibility with Mouhamed “Sena” Niang testing McKenzie from the edge of the Cove box. Cove set up in a very narrow formation and it seemed to suit Alloa who constantly could support through their full backs. But Vigurs injury and the introduction of McIntosh appeared to widen the Cove threat and blunt the Wasps rampaging wing backs as the half wore on. They did however deal well with the intelligent interplay of Megginson and McAllister who received no change out of the centre back pairing of Graham and Durnan. But again as the opener remained elusive for the Wasps, 5 minutes before half time, they were again pegged back by a rocket. Jamie Masson who scored in the Wasps’ last encounter against Paul Hartley’s side, fired another in to rival his last minute winner in the Wee County. This time it was a deft side footer which perfectly found the top corner past the outstretched Hutton from 20 yards.

Alloa’s second half went from bad to worse as just before the hour mark, a Durnan non-challenge elicited a penalty on McIntosh, which seemed especially harsh on replay. The referee consulted and awarded for Rory McAllister who’s been imperious from the spot to step up and solidify the blues’ lead. Mitch Megginson would add late insult to injury too with a pinpoint curling finish finding the top corner and condemning Alloa to a dour 3-0 defeat on the road.

Alloa’s poor run of form continues – Cove stretch their lead at the top – but Alloa need a Christmas pick me up before a tough two weeks on Boxing Day and the 2nd January.