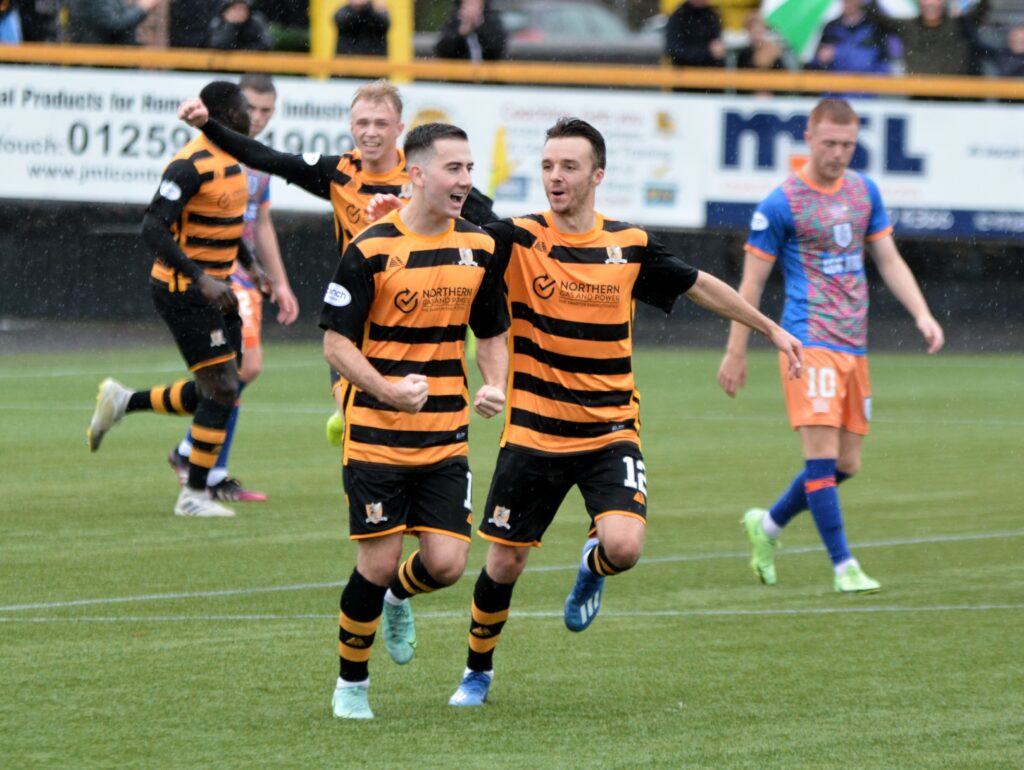 Alloa reverted to the tried and tested 4-2-3-1 with Mendy and King dropping out of the starting XI to make way for the stalwarts of Robertson and Cawley.

It was the home side who created the tantalising chances in the early minutes, Boyd would rue an early opening shot as he chested down Robertson’s cross, and unmarked could only smash it at Muir in the centre of the Queen’s Park goal. Mouhamed ‘Sena’ Niang also had a driven effort fly wide. Sammon charging through was almost brutally smashed by an errant knee, Wullie Muir lucky to escape with just a yellow after a nasty challenge on the Irishman and Kevin Cawley would meet another Robertson cross with a header straight at the Spider’s keeper.

The major deciding factor of the first half was the quickfire double yellow of Craig Howie, after being second to a 50/50 and inflicting a fair amount of pain on him and his opposite number he was shown a yellow and 16 minutes later would receive a second yellow after a naive sliding challenge missed ball and caught man. It was a galling decision from an Alloa viewpoint especially as Queen’s Park skipper and former Alloa legend Michael Doyle had escaped a similar mistimed tackle on Sammon minutes earlier.

But as the first half wore on Queen’s were held to only long range efforts on Hutton’s goal.

The second half saw Alloa soaking up the pressure in what can accurately be described as two banks, a 4-5 formation, with the introduction of King for Cawley. But again somehow the hosts were the ones challenging on goal as Sammon curled on his weak foot into the arms of Muir and Boyd couldn’t quite run himself into a shooting position as Muir was again forced to come collect the ball at the Alloa forward’s feet.

But just as the Queen’s Park lack of imagination was showing, Doyle whipped in a ball to the 6 yard box, Hutton gets caught in no man’s land, and neither Robertson or Graham can stop Simon Murray nodding in for the opener from the visitors.

Credit to the Barry Ferguson who immediately saw the need to open things up again, O’Donnell and Mendy coming on for Taggart and Sammon, and the system changed to a much brighter 3-1-4-1. The Wasps kept finding openings and Queen’s Park were forced to bite at the heels of Boyd and Scougall which only stirred the hornet’s nest at the Indodrill as the 10 men began to make it a stretched end to end tie.

With Sena being brought down a hairs-breadth outwith the box, up stepped Boyd to deliver a free-kick off the bar twice and over the line but the equaliser hadn’t put paid to the breathless end to the game. Queen’s Park managed to smack the bar after Murray’s effort was barely deflected off course and Boyd was blocked smartly up the other end after another dazzling solo run. Both title hopefuls left with a hard-fought point.

“I was happy enough, we created a few chances with 11 men, then obviously when we go down to 10 men we need to play a certain way which is not ideal, we’ve got to sit behind the ball and try to frustrate and, hopefully, we get that odd chance from a set piece and that’s what we spoke about and, thankfully, we got it.

“One thing the boys showed today was character, that’s the most important thing.”

“I’m happy with the result after going down to 10 men. Queen’s Park move the ball pretty well, they never really cut us open, it was from our mistake that they got the goal. It was good character, good resilience from us”

“I watched Alloa a number of times before I took the job and that’s one thing I noticed they were always decent enough and getting beat. Today we showed a bit of siege mentality. We’ve got good quality, we just need to gel it all together. It’s not going to happen overnight but i know what football’s like, you’ve got to start winning as quickly as possible. You don’t want to be a number of points behind teams going into November-December”