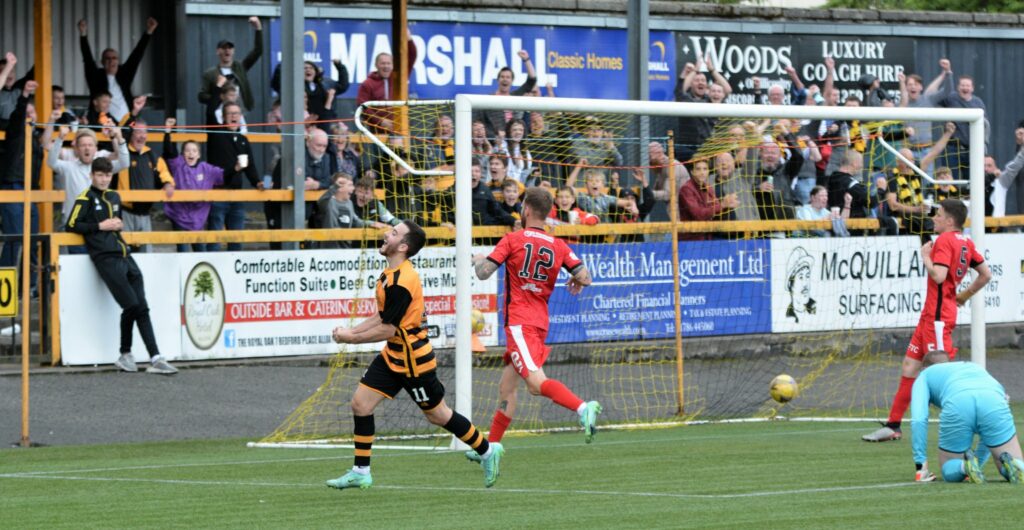 Alloa gave two debuts today as Mark Durnan made his first start and we saw an interesting 3-4-3 formation take shape for the outing against East Fife. With the elite SBS (Scougall, Boyd and Sammon) leading the line Alloa looked to carve the early opportunities. The pressure told after 29 minutes when Scougall slipped past Higgins, charged into the East Fife box and laid on an outside of the boot through ball for Boyd to hit home at the back post. David Hutton made a magnificent to deny Danny Denholm, a player who seems cursed to defeat at the Indodrill, as the veteran athletically launched a strong arm to beat the ball away from the equaliser.

In the second half East Fife reclaimed parity with a sublime Jamie Semple pile driver. Hutton beaten at full stretch as the ball rocketed past him from 25 yards. With the confidence of the wondergoal firmly in mind, East Fife pushed for a second but it was the Wasps who would bite back. Daniel Church providing a precision cross to pick out Conor Sammon. The Irishman poked home at the front post to restore the Alloa lead. Just a minute after the restart East Fife were punished as Sammon, Boyd and Scougall executed a swift counterattack and raced through with the former Hamilton man firing past Gallacher to give himself a chance at a hat trick.

Alloa managed the game out as East Fife struggled to triage a wounded front line. Alloa’s league campaign getting back on track as they jumped to 6th in League 1.

We dominated the game

Barry Ferguson : “In the first half, I think we dominated the game, no doubt about that. We were a wee bit wobbly, they scored the goal, felt a bit sorry for ourselves but I was waiting on a reaction and I got that. Once we got the second goal, I always thought we were going to be in control. When we got the third goal we just saw out the game.”

“That’s what I want. The only thing I can be disappointed in is the first 15 minutes of the second half but I got a reaction with good nights on Tuesday and Thursday and obviously a good result against East Fife, who got a great result against Queen’s Park last week.”

We’ll get there through hard work

“[Scoring’s] been a problem for Alloa over the years and that’s one thing we need to do. We’re solid enough defensively but we need to create more opportunities. Today, we were good and we’ve got three goals. That’s something we work hard on but something that won’t happen overnight because it’s a new group but we’ll get there through hard work.”

“The market is slow in terms of loans but just now we need to work with what we’ve got but hopefully we can have one or two back in contention after Tuesday night.”

“Scougs was in a different position today, He’s got fantastic ability but one thing I love about him is his work rate. He’s phenomenal. If you look at him he’s about 8 stone wet but he gives me everything. I need to get a position where I can build my team around a player like him. He’s a matchwinner when he plays like that.”