A point at East End Park against Dunfermline Athletic was a huge improvement in the teams performance against Ayr United the previous week, but this was a game, albeit there was not a lot either keeper had to deal with, “The Wasps” would rightly feel disappointed they didn’t collect all three points after Dunfermline Athletic scored with a goal, where there was a clear hand ball in the build up.

“The Wasps” were unfortunate to lose key defender Liam Dick after he failed a late fitness test, failing to recover from injury picked up last Saturday against Ayr United, this gave an opportunity to Adam Brown which he was to grab with both hands. In a very tight squad injuries to Neil Parry, Liam Dick, Blair Malcolm and also Robert Thomson who had a tight hamstring, left manager Peter Grant with a real lack of depth to his squad. It was obvious from the kick off that Dunfermline Athletic had learned from the threat of Alan Trouten who was closely marked at all times and given very little space.

The opening goal just after the break was a thing of beauty, Kevin O’Hara passed inside to Adam Brown who advanced towards the Dunfermline goal before sending an unstoppable shot into the top right hand corner of the net which set the Alloa Athletic supports into a sea of celebration.

Eight minutes later however the home side grabbed a contentious equaliser after striker Kevin Nisbet had handled the ball before it broke to Kyle Turner, whose shot ended in the back of the net for a cruel equaliser.

After the equaliser the home side looked to grab a winner but apart from a header from Kevin Nisbet which went close neither manager could say they had worked the opposition keeper enough to claim three points. Alloa can still take positives from a match which saw Iain Flannigan make his 200th appearance for the club, along with club captain Andy Graham who made his 150th appearance for the club. Robbie Deas was outstanding in defence throwing himself to block efforts from the Dunfermline Athletic players and looking solid throughout. Iain Flannigan and Stevie Hetherington provided the perfect midfield shield in front of the defence and looked to break when ever the occasion presented with Kevin O’Hara doing some tireless front running to stretch the home defence. 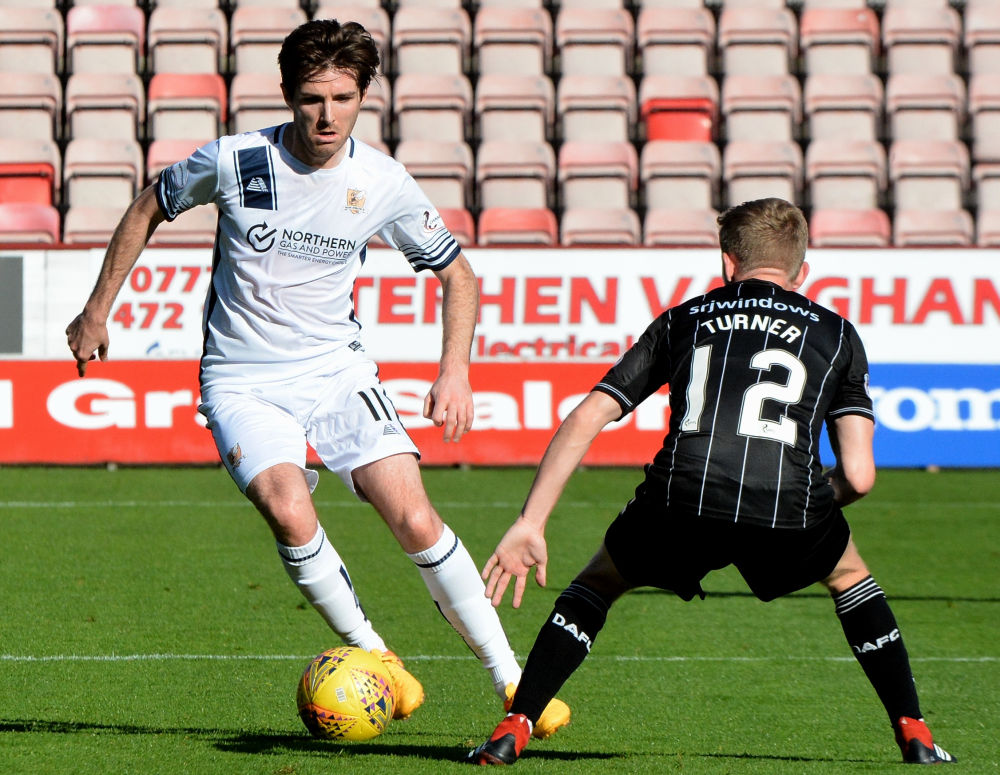 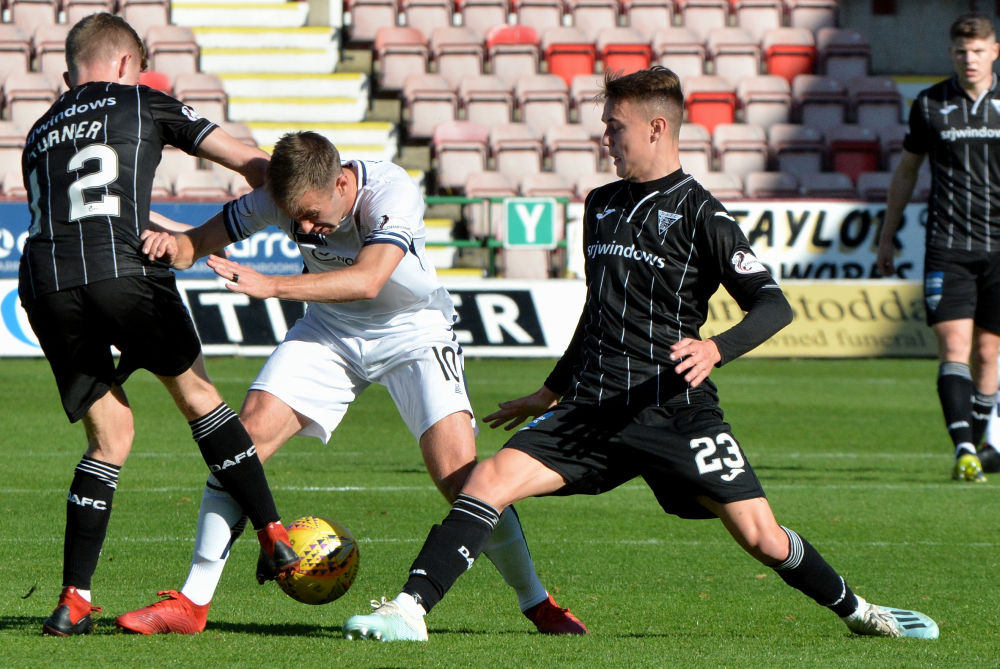 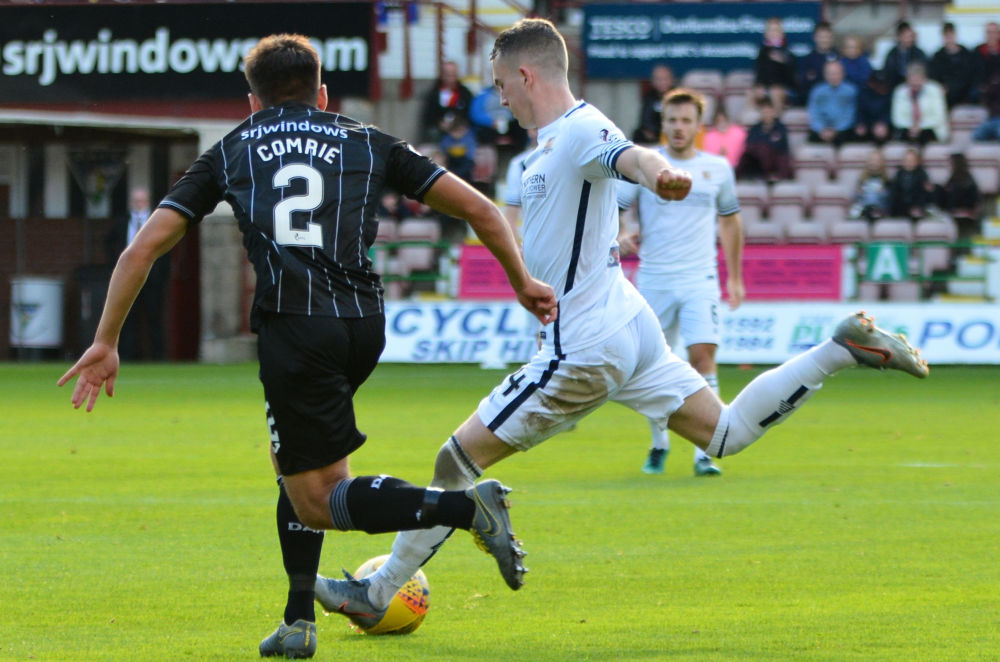 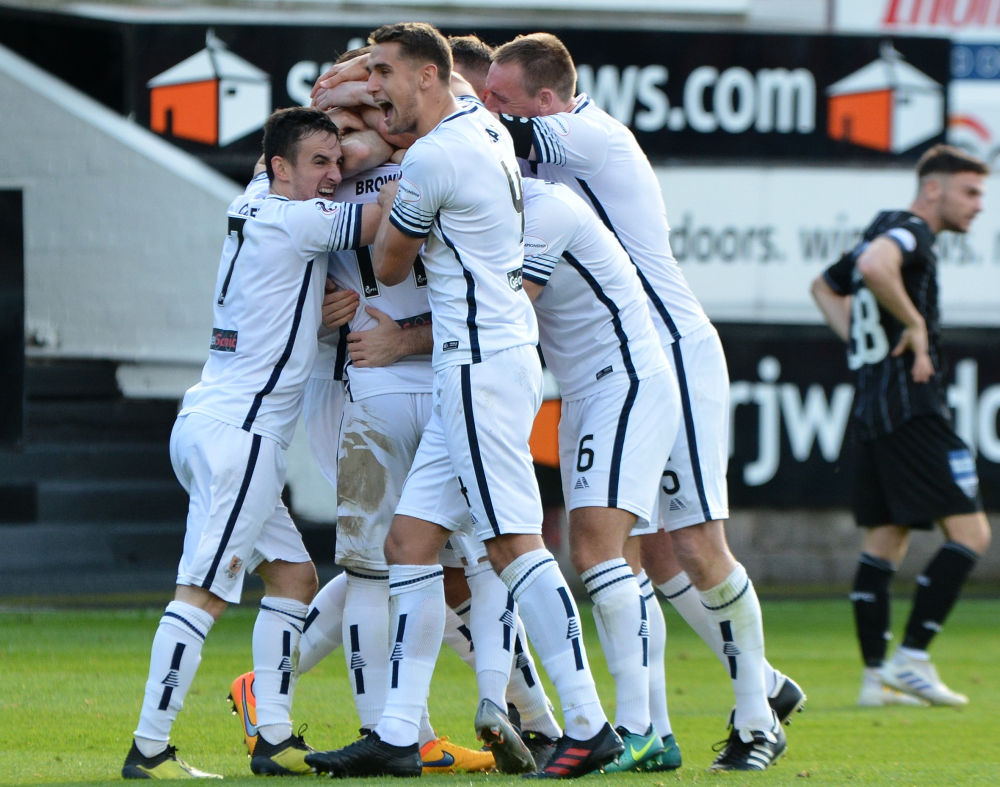 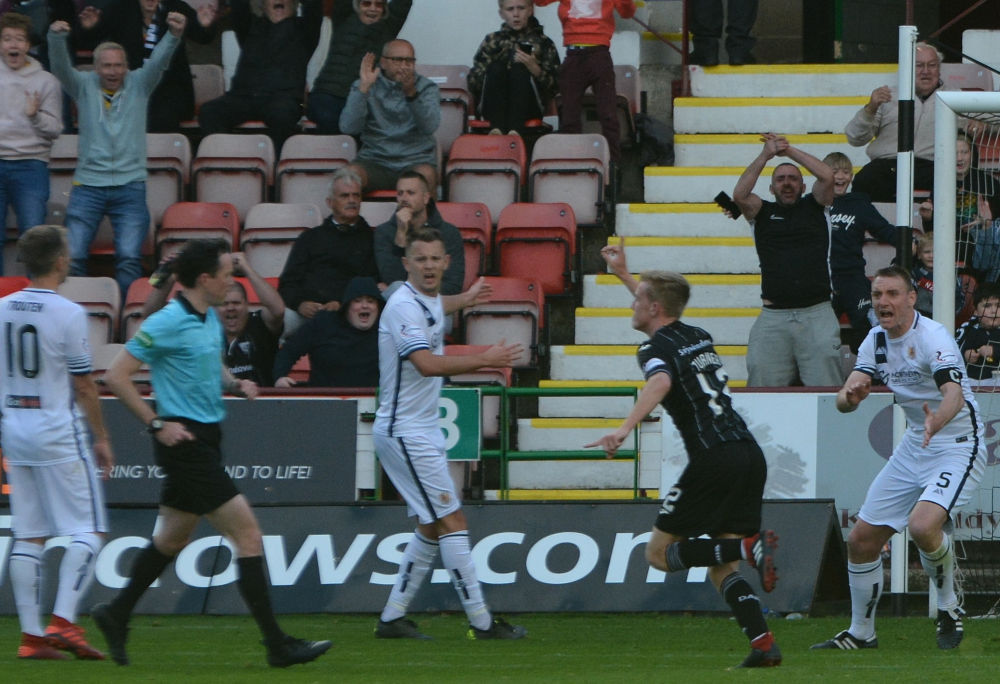 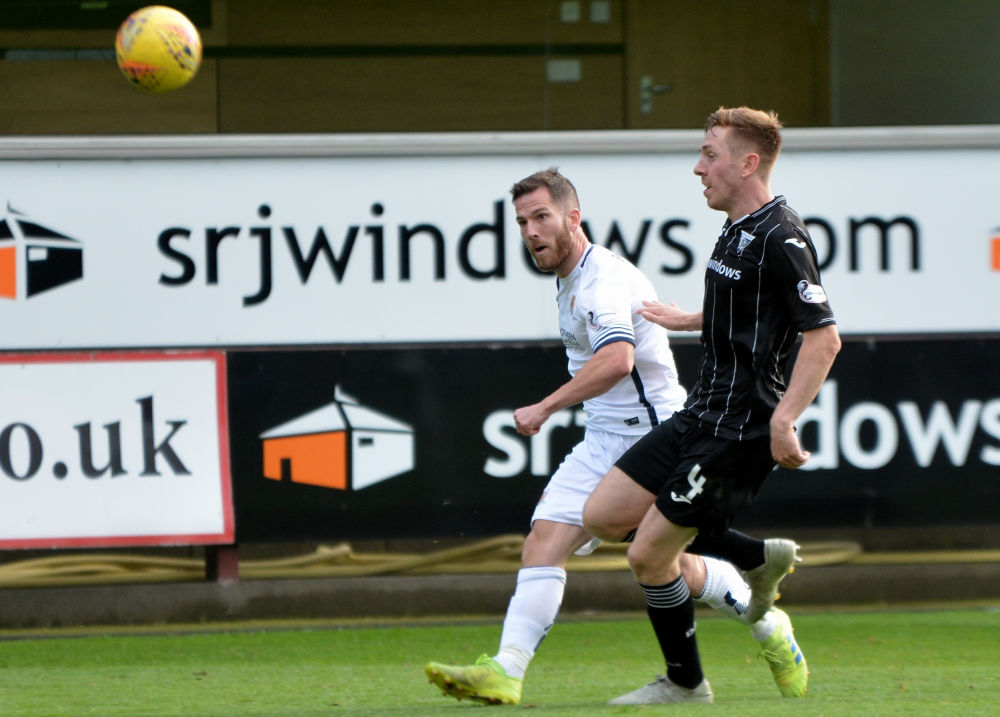 Liam Buchanan with late opportunity to lob their keeper

Today I was really pleased with the boys and certainly a lot different from last week, it didn’t help today having to make changes after the warm up, Liam Dick just not feeling quite ready after the pre match warm up and Adam Brown was put into the starting eleven and Jon Robertson took over at left back  having impressed after coming on last week and of course Adam Brown took the opportunity by putting us ahead with a wonder goal, I was delighted for him but that is what you expect from your team, but I’m disappointed, coming away from the game not to collect the three points. When you go one in front and knock the ball about really well, we created opportunities and had good possession. When we go in front I expect us to stay in front, but we were to lose a bad goal, however I thought there was a hand ball in the lead up to the Dunfermline Athletic equaliser.

We get criticised for criticising referee’s, I know their job is hard, but our job is hard as well, these two points we feel we dropped could be massive for us come the end of the season. I don’t want to be “Poor old Alloa”, you can give a decision against them and it doesn’t matter. I don’t want to take it away from the players, you would normally come here and be delighted with a point, I’m disappointed because I’m greedy, I thought we deserved all three points, once we went in front we should have stayed in front.

Adam Brown has all the talent, there is no doubt of that and he can hit the ball like a bomb, he does it week after week at training but it is just for him to make the right choices, he is a young man still learning his trade and as I have said there is no doubt he is a talented boy and I am delighted for him today because I was critical of him in the dressing room last week after he came on in the game because there were certain things he did which were not what we asked him to do and he has responded in the best possible manner today, his work ethic for not playing for weeks and then produce the performance he did today, he is learning on his feet and then to go and score a wonder goal it is just a pity is was not to be the winner.