“The Wasps” for the second year running have knocked out “The Pars” at East End Park in the Challenge Cup, last season Irn-Bru Cup, this season renamed The Tunnock’s Caramel Wafer Challenge Cup.

Alloa started the game brightly and looked to take the game to Dunfermline Athletic but could not find the final ball inside the eighteen yard box. On 28 minutes Alan Trouten was unfortunate not to get on the scoresheet but Cammy Gill in the home goal pushed his effort over the bar for a corner. From the corner which was headed clear Dunfermline broke at pace and outnumbered the Alloa defence, and when Greg Kiltie was released on goal he took the opportunity to open the scoring on his debut since signing on loan.

Worse was to follow as goalkeeper Neil Parry suffered a suspected hamstring injury at the same time which could keep him sidelined for a while. Chris Henry came on and played his part in the victory.

Five minutes before half-time “The Wasps” scored an equaliser through Robert Thomson who had been troubling the home defence, Liam Dick’s shot from left of box was partily cleared but the alert and brave Robert Thomson headed home at the back post.

Just prior to half-time substitute goalkeeper Chris Henry made an important save from Lee Ashcroft’s header to keep the score level at half-time.

The winning goal came after 53 minutes and it was that man Alan Trouten who again was on target at East End Park, ghosting into the box to score with low shot into the corner which went in off the post.
At this stage Alloa were on the ascendancy and Robert Thomson was unlucky not to add to his earlier strike, this time with an overhead kick which just cleared the crossbar.

Dunfermline athletic manager Stevie Crawford introduced twin strikers Andy Ryan and Kevin Nisbet just on the hour mark in an effort to get back into the game. Dunfermline certainly had to bulk of the possession in the latter stage of the match but the Alloa defence looked solid as they withstood the home attacks.

Alloa were then to suffer another blow when Blair Malcolm who had only been on the pitch for some five minutes pulled up when chased down the left wing and had to leave the field, with “The Wasps” now down to ten men.
The Alloa players battled till the end and Chris Henry would have been delighted to keep a clean sheet.

The Wasps can now look forward to the 4th Round Draw on Tuesday at 12.30 Live on SPFL You tube channel. 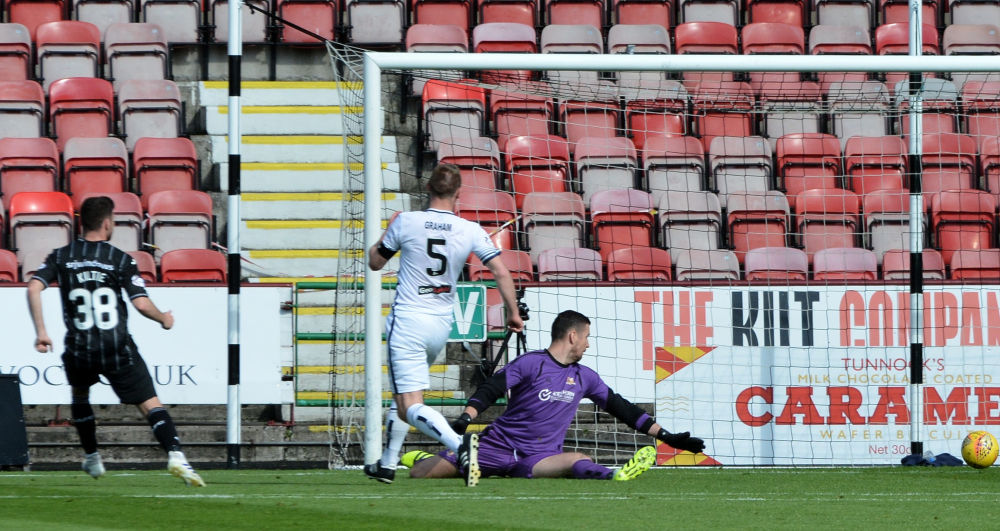 Neil Parry is stretchered off 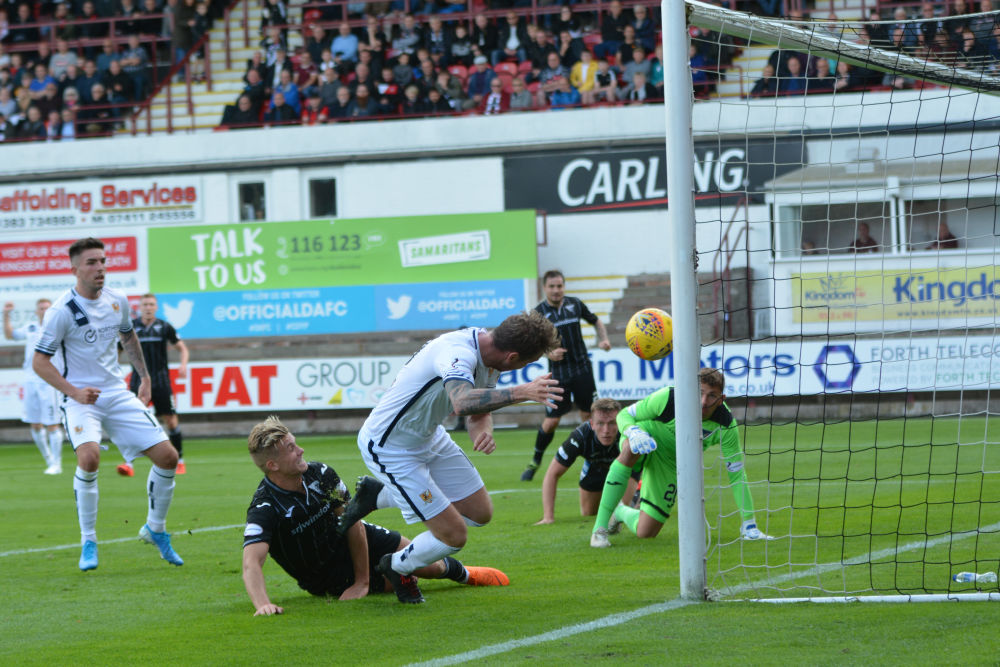 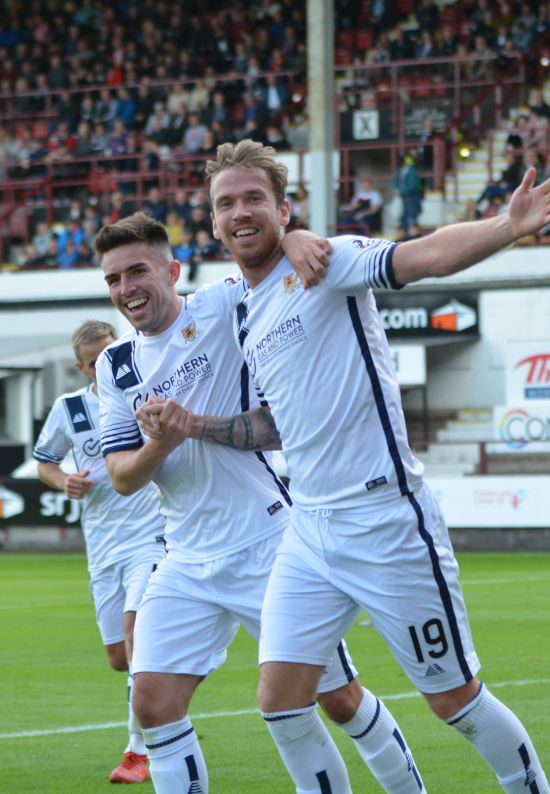 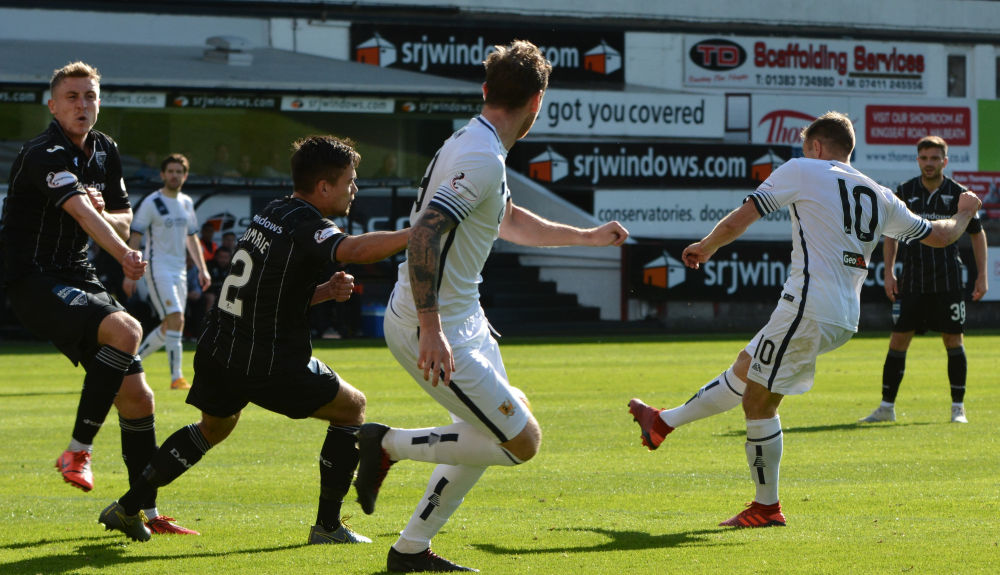 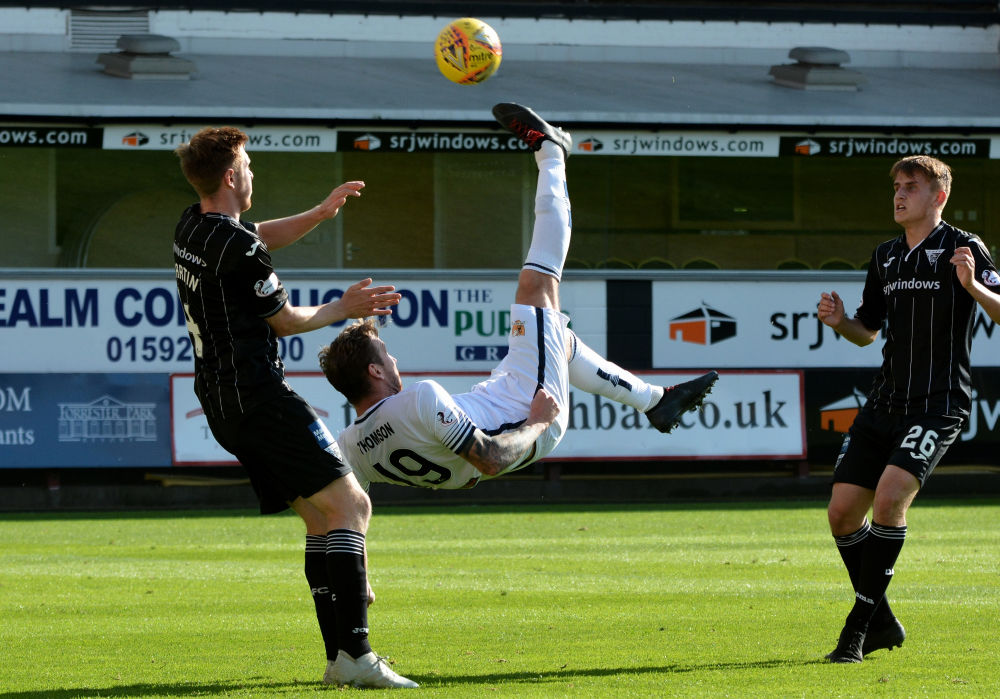 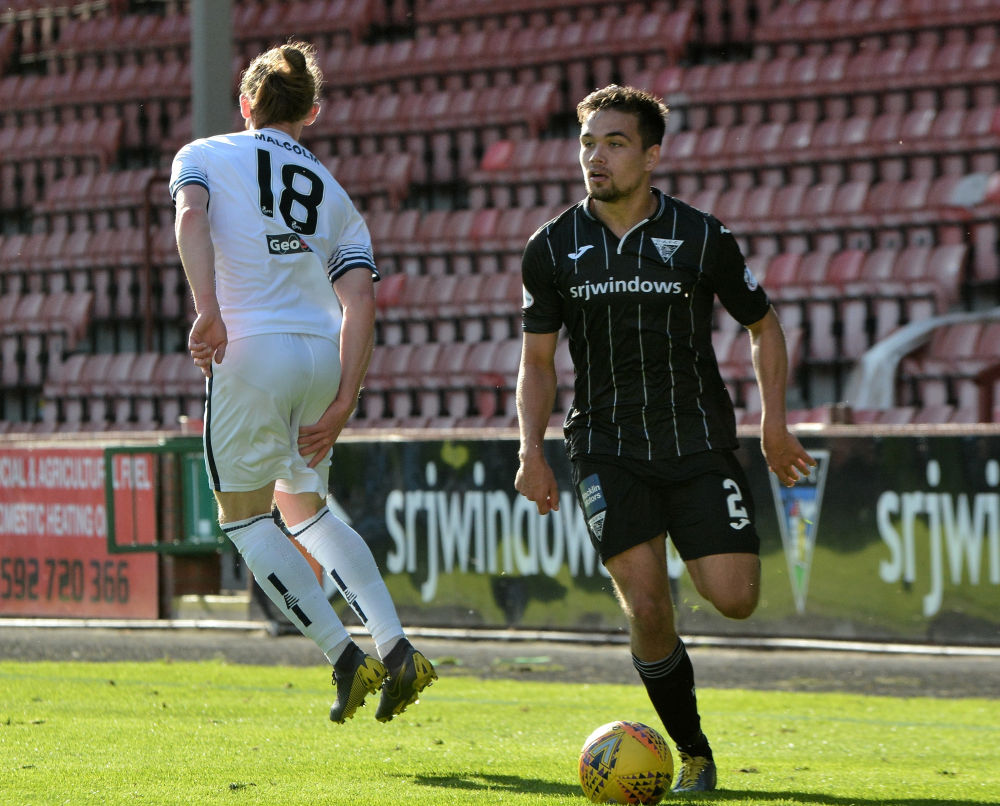 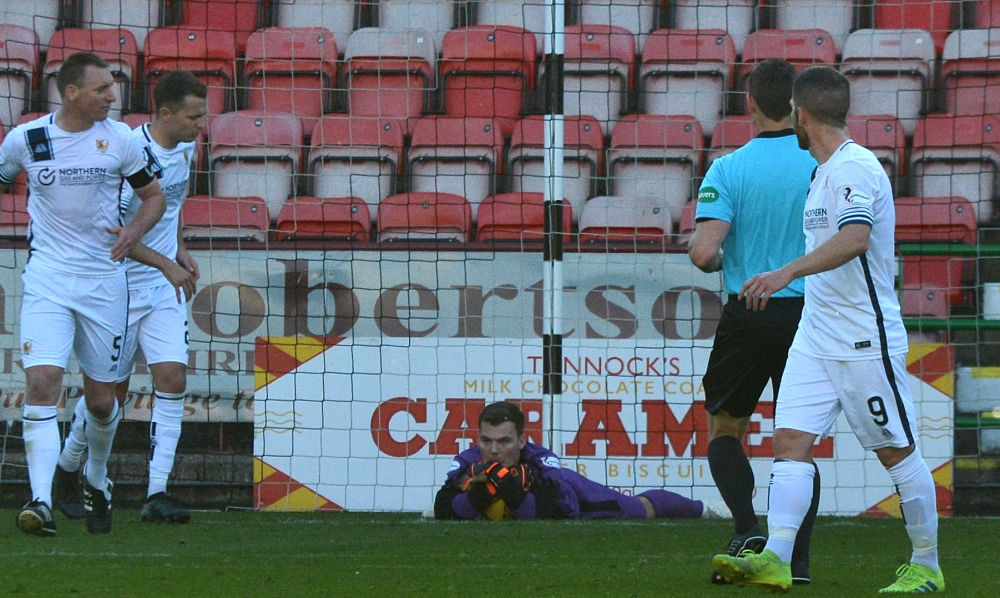 Chris Henry holds on to the ball

Peter grant after a good day at east end park

Well chuffed again to-day, a couple of weeks ago when we played Arbroath I said we played it like a testimonial game, certainly not looking competitive but I think we have been excellent in our last two games both with the ball and against the ball, so I have been really pleased with that. I have said from the start we have a goal threat along with one of the best defenders in the league in Andy Graham, along with some of the best leaders, if we get it right at the back and make sure we defend well against the ball we know we have players who can win games and that proved to be the case again today with Alan Trouten getting the winner.

I can’t fault these guys, from day one since I came in their effort has been phenomenal and today we picked up a couple of injuries, players and been working and travelling to their work there is not much we can do about that, that’s the way life is when you are part time, but the one thing I can give them great credit for is every time they train they give it their maximum effort and maximum commitment and you can see that the way we had to dig in at the end. It’s not just a team this, it is a group of players who somebody described as a gang and that’s the way I would describe them because they dig in for each other, they fill in for each other and that’s what it takes to win games of football.

The pitch was magnificent today, but all of a sudden we were taking too many touches it was that good, we like to move the ball quick and I thought we took too many touches on it, but once we got playing that wee bit quicker and mixed the game up a little bit more I thought there was nothing I could complain about. In Alan Trouten we have one of the best players at arriving in the box and getting these crucial goals with a phenomenal finish. I think at the death I was more pleased being down to ten men and having bodies on the line to stop crosses, they were heading balls clear in the box with midfield players who are probably not used to it at times and having to head balls away. These are the things which make you successful, there is no easy route in football and these boys have proven it, they work their socks off every time they train and they are getting their just rewards just now, but we know it is in every game they have to do the exact same thing due to the standard we have set from our first game of the season against Partick Thistle, probably about 80% of the game we were excellent but they have to play like that week in week out and against the ball they are getting better.

Neil Parry felt something pop in his hamstring and it’s a bit unfortunate because Neil has been working away this week and missed training on Thursday, there is no luxury of rest periods as full team players can get, gutted for him because he has been outstanding for us we will just have to wait and assess it and wait for the scan results, it was similar for Blair he was just on, you can warm up as much as you can but it is very difficult at the side of a pitch to be prepared for a match, yet again he is a young man who has not played a lot of football recently, played very well last week in a difficult pitch at Dumfries, but this week he came on and possibly a stiffness in his game legs he has not got yet and I think that is the issue, he has a tight hamstring, he felt it and I am always concerned when it is a hamstring, hopefully that is not the cause and he will be available next week because it would leave us short but you have to deal with those things, we knew that prior to the window closing, so we will work something out.