Unfortunately Saturday’s game against Dunfermline Athletic was as poor a game as we have played all season, certainly conditions were not great on the day with a strong icy wind blowing down from the Ochils. “The Wasps” started well and too the game to their opponents, Dunfermline Athletic who were on a run four straight victories in the league moving them up into the Play-Off positions.

When you are battling at the bottom of the table decisions seem not to go for you and on another day Alloa would have been awarded a penalty after 8 minutes when James Craigen pushed Dario Zanatta in the box, but referee Euan Anderson was not moved.

The opening goal is so important in matches but the opportunity was not given. In truth the first half ended with little more of interest in a game which was a poor spectacle for the supporters of both teams.

The visitors started the second half brightly and on 53 minutes Bruce Anderson on loan from Aberdeen scored the games only game, a game which had seemed destined to end 0-0. Alloa fought back in the game but a lack of ruthlessness in the final third of the park and great defending by Dunfermline kept their goal intact.

The result sees “The Wasps” move to the bottom of the division after other results over the weekend were not favourable. However we need to take care of our own results first, we can play a lot better in our bid to beat the drop. 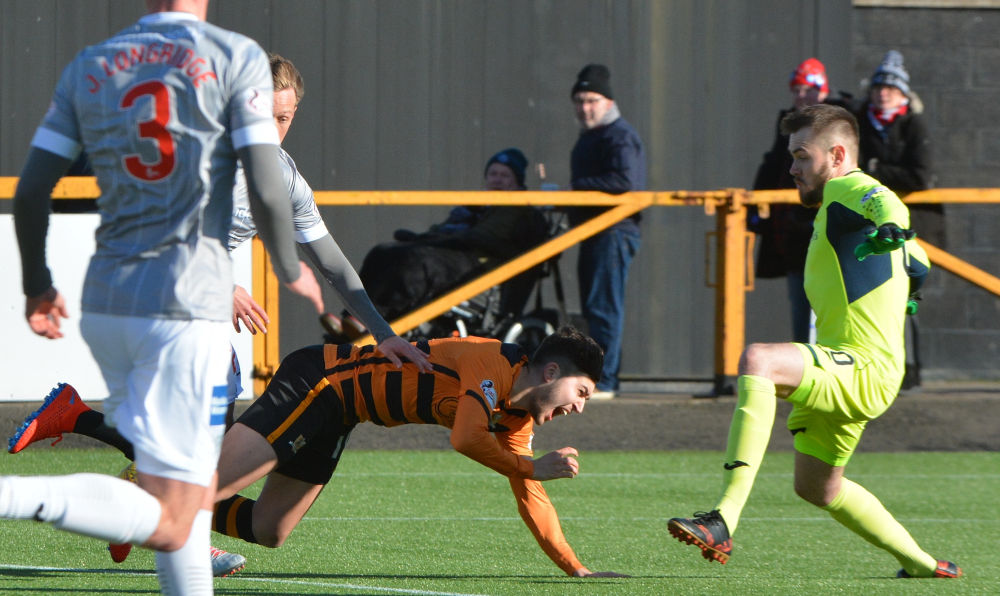 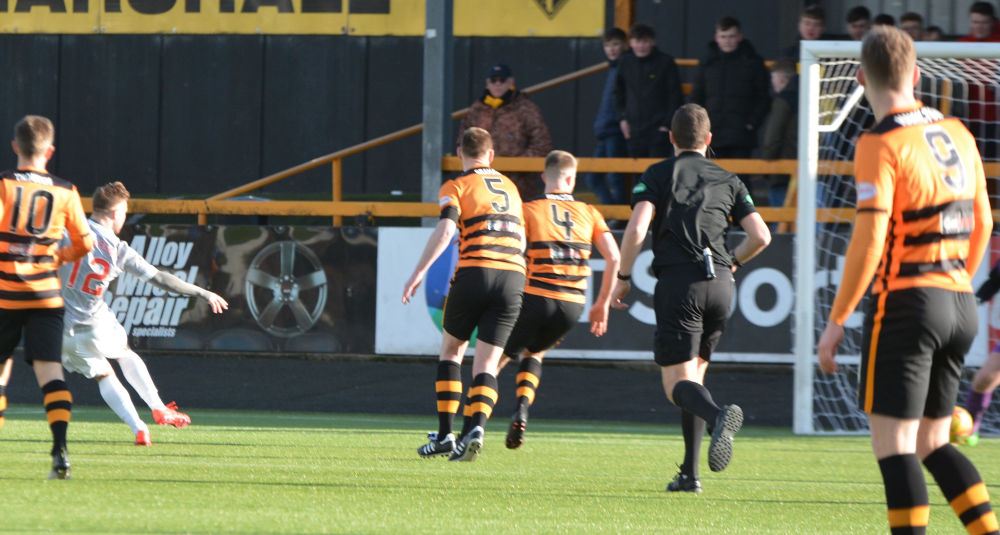 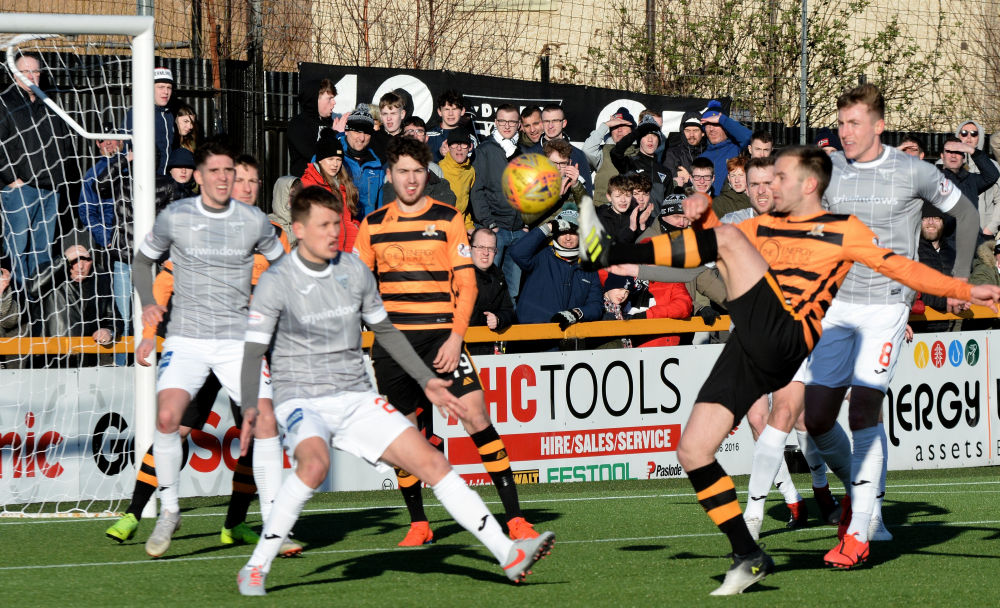 Alan Trouten was well marked having on target in past games 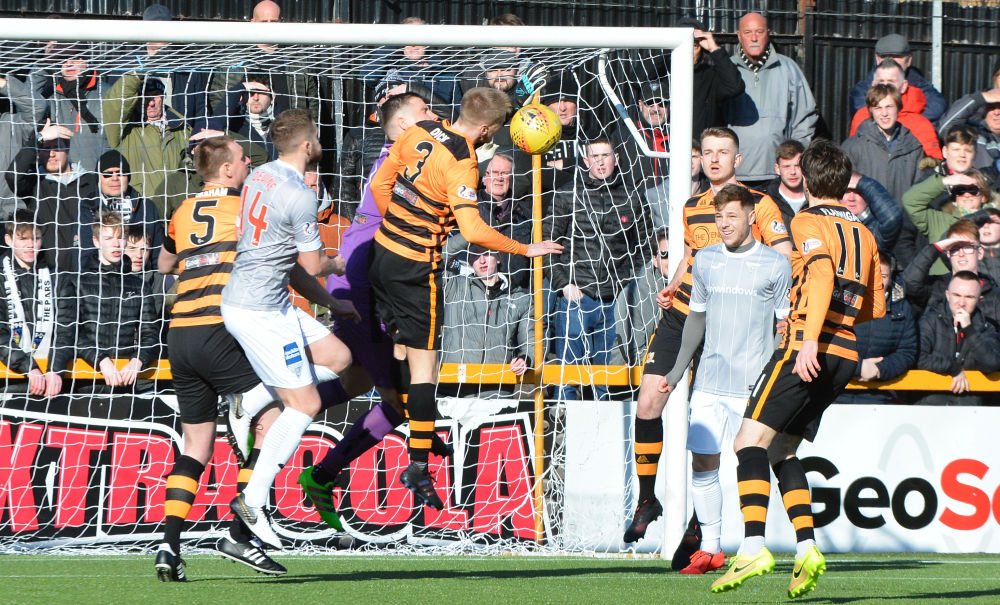 jim goodwin after defeat against dunfermline

Very disappointed, I thought it was a terrible game of football, conditions didn’t help it was windy, pitch was very sticky, both teams were very wasteful in possession, it was a kind of game which had 0-0 written all over it, neither goalkeeper has had much to do, I can’t remember Neil Parry having a save to make, a couple which were straight forward and Ryan Scully has had nothing to do either.

Disappointed, I would have been delighted to have taken a draw from the game a 0-0 and just move on because it wasn’t a great game of football whatsoever. I would like to see the penalty incident back early in the game, Dario says there was definite contact on his back, a push in the box it is a penalty but we always don’t seem to get these type of decisions unfortunately, so I will watch it back and see but it doesn’t matter at this time, it would have been nice though if we had been given it and try to get our noses in front but I just thought it was a poor game of football. Dunfermline are on a great run of form, five wins, five clean sheets, I thought our two centre half’s marshalled Bruce Anderson very well for the majority of the game apart from the goal and that’s what all good strikers do, they don’t do a great deal during the game and pop up at the key moments and I thought he took his goal particularly well, albeit we need to defend it a whole lot better, we end up with an overload on the right side and two versus one, we don’t do enough to stop the cross then and I think when the ball comes into the box we need to deal with it better, simple as that. However we didn’t do enough going the other way either.

I brought Jack Hamilton in for a bit more presence, he came on down at Dumfries against Queen of the South and did very well, I know Ashcroft and Devine are two good physical centre halves and I though Jack would give us more of an outlet there aerially and physically than what Dario does, knowing Dario has always done well for us on that left hand wing, we just tried to mix it up and see what happens. Jack Hamilton did fine but on the hour mark he is only 18 and would struggle to last the game so it was always my intention to make a change at that time.

It was a bad game of football, it is as bad as we have played all season, it is games like that you just have to grind out a result, I would have taken a point and move on but unfortunately we got done losing a really poor goal.

There is nine games left and in recent weeks we have had luck with results going our way, there are always going to be times we lose and the teams around us win and that’s just the way it is, I was at the Falkirk game last night and they did great to beat Ayr United and Partick Thistle get a last minute winner today but we have had our moments scoring last minute winners, it happens, we just have to pick ourselves up, dust ourselves down and go again next week against Morton, I think there are teams now getting dragged into it like Morton and Queen of the South, they will be looking over their shoulders, it is not only ourselves Partick and Falkirk which are in it there is other clubs as well, there is still a lot of football to be played. We can’t get too down about the result, I thought we could possibly could have nicked a draw, we certainly didn’t do enough to win it so we will just have to go again next week.