Alloa Athletic manager Jim Goodwin once again highlighted the fact that his team never give in as they came back from a 2-0 deficit at half-time to clinch a merited draw having dominating the play in the second half, when remarkably Alloa keeper Neil Parry had not a save to make.

“The Wasps” for the ninth time this season came back from behind to clinch a draw or victory having been behind now 4 times v. Dundee United, 2 times v. Dunfermline Athletic and on 1 occasion against Inverness CT, Falkirk and Partick Thistle.

Alan Trouten was once again the man to turn the game back in Alloa’s favour, scoring the crucial first goal in the second half to give “The Wasps” a fighting chance. The game then turned on its head with the Dunfermline players looking visibly shaken and their fans starting to turn against them and their manager.

Alloa pushed for an equaliser as the home team tried to run down the clock, Alloa substitute played through the vital pass to put Alan Trouten though on goal and “Trouts” scored his 14th goal of the season. 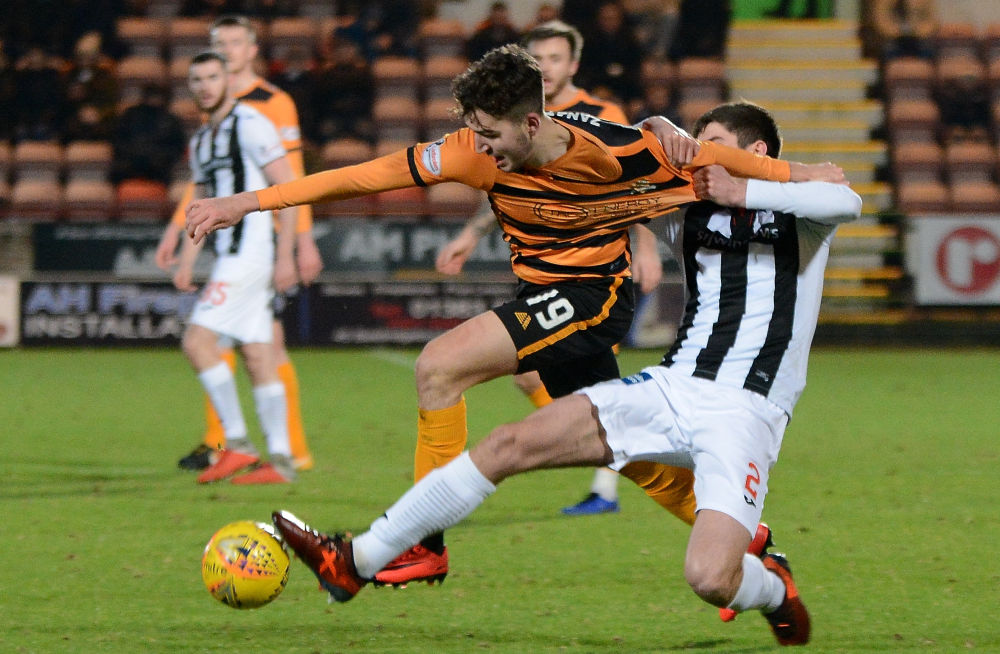 Dario Zanatta has his shirt pulled in tussle 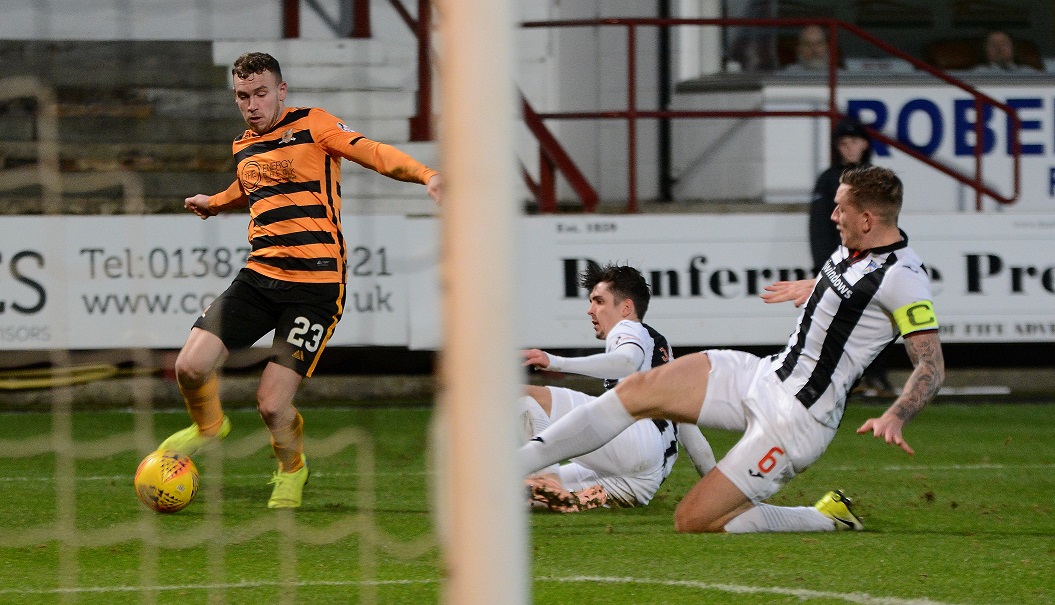 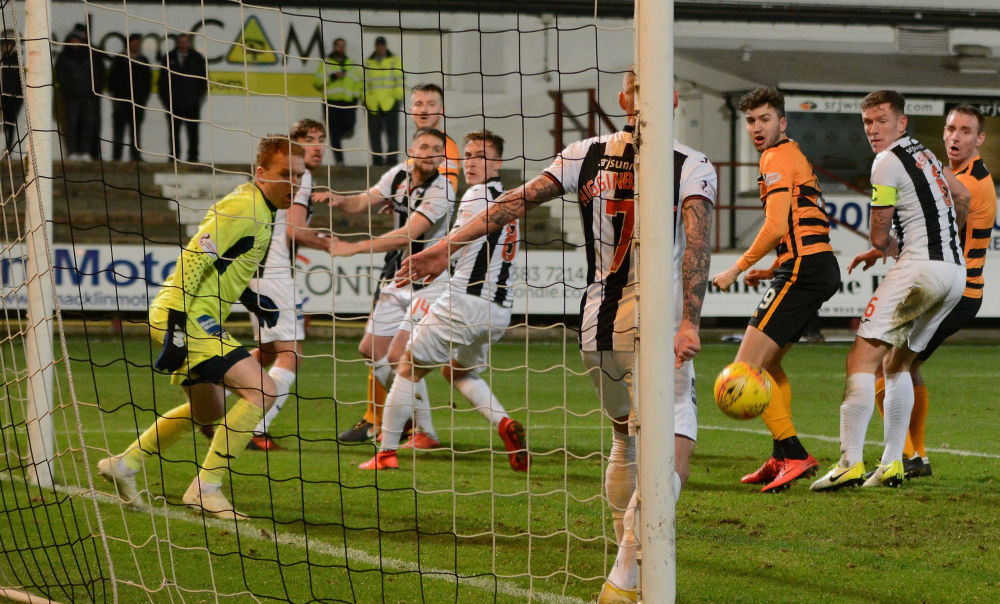 Sam Roscoe's header is cleared off the line 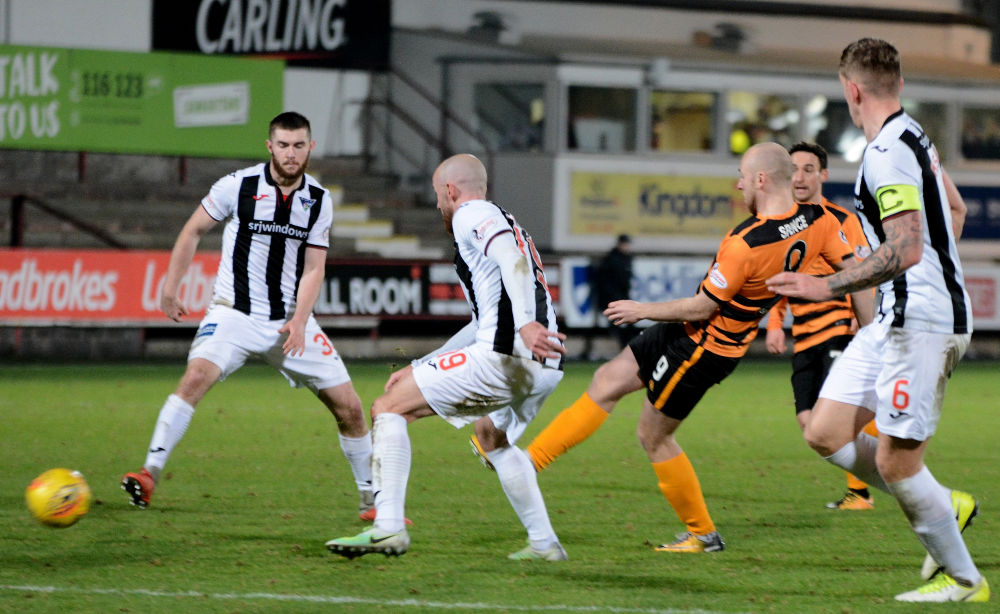 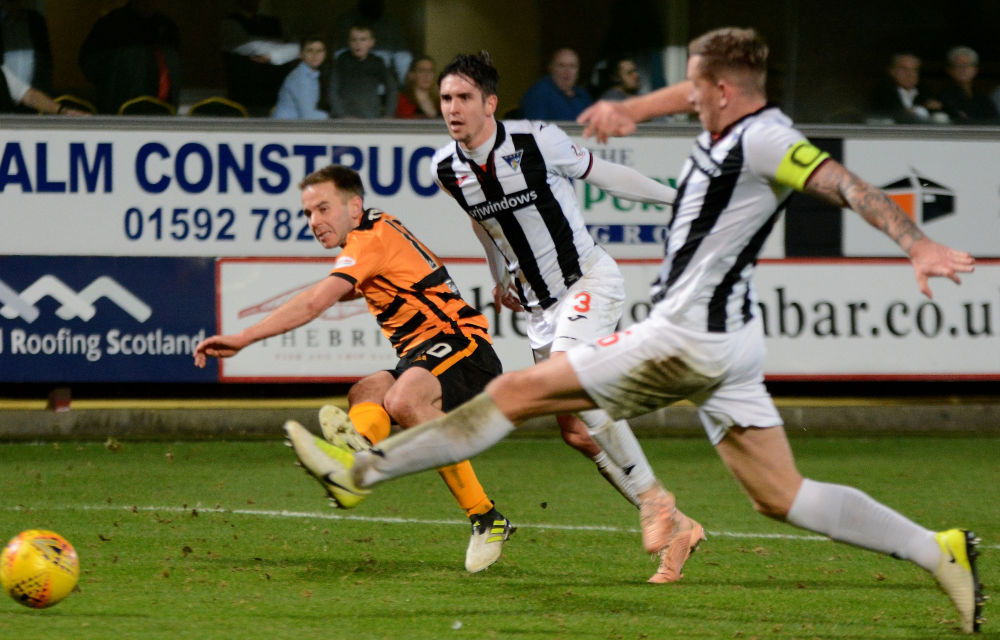 It was a game of two halves, it definitely was, I thought Dunfermline were excellent in the first half, we were off it there was no doubt about that, we didn’t compete well enough, we didn’t show enough composure on the ball and it was just wave after wave of Dunfermline attacks, so we were delighted to get in at half-time at 2-0, albeit the two goals the first a great strike from Aidan Keena from twenty five yards out there was not a lot Neil Parry could do about it and for the second goal Iain Flannigan was very unfortunate, Neil made a good save and Iain following in, the ball hits him and goes in as an own goal.

We got in at half-time 2-0 down and changed the shape a wee bit and stressed the importance of the next goal and I really did feel if we got the next goal I felt the home fans would get a bit nervy and this would get the Dunfermline players nervy and that definitely seemed to be the case, we were much better in the second half and it was more like us in possession and out of possession, we competed a lot better and picked up far more second balls and I don’t think Neil Parry had a save to make in the second half, it was just fantastic.

I think that is now fourteen occasions they have come back during 2018 till now in 2019, that they have come back from a losing position being behind to pick up a point or three, I have just said to the players “You can be the best manager in the World, with the best group of players technically in the World, talk formations and tactics all you want, but the team spirit and the character and togetherness of the players we have at present you cannot buy that, you can’t coach that, that is something that comes from within”, they can be so proud of their effort in the second half, they never know when they are beat and never give in and that’s what I have been saying every week. We know we will come to some difficult places, we know we are playing against some very good teams but all I ask for is 100% commitment and that we never give in and you can see that from the players they just never give up which is fantastic.