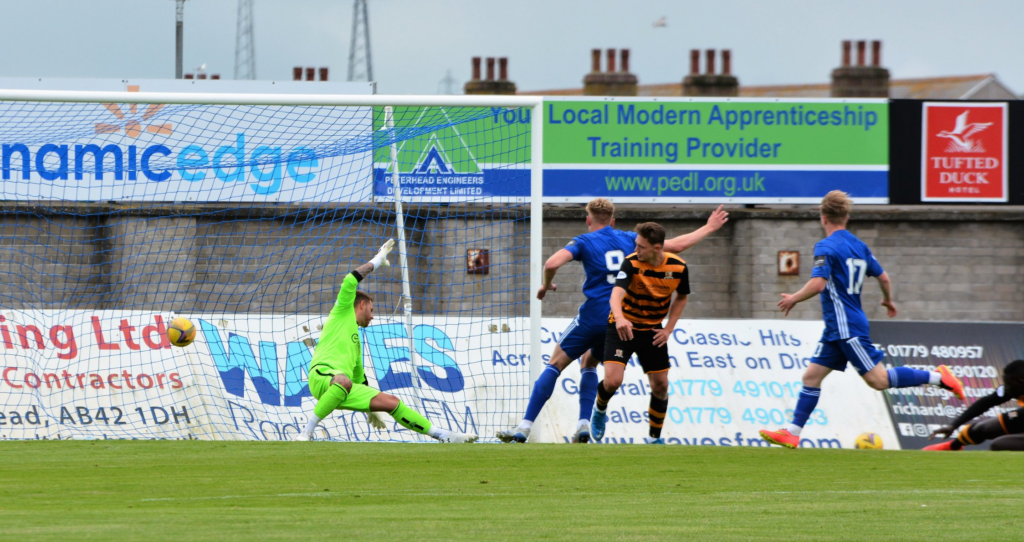 It was again a sparse bench as Alloa opened the cinch League 1 campaign against Peterhead at Balmoor Stadium. Taggart, Robertson, Durnan, Cawley and Armour all missing for the trip to the northeast and Fernandy Mendy, Alan Trouten and Mark Lamont having a very limited pre-season. It’s very much a work in progress team as Alloa set up with Fernandy Mendy at CB for his Alloa debut.

But after 8 minutes it was Peterhead who showed they were the sharper team. Andy Graham isolated in a 1v1 with Niah Payne, the forward blasted past the captain to the byline and curled a cross in between Mendy and Howie to give the hosts the opener. A former Wasps’ youngster, Russell McLean’s second spell getting off to a flyer at Peterhead. It was to get little better as Peterhead created the best opportunities of the half. Hutton called into action for a few routine stops while at the other end Brett Long was still to be tested. Boyd and Sammon had the pick of the efforts but both saw their attempts fizz off target.

The second half saw the introduction of the youngsters O’Donnell and Webster and the two spearheaded what looked to be a refocused and driven Alloa response. But that was firmly deflated in the 63rd minute when Russell McLean would find himself in behind the Alloa defense and this time turn provider to Niah Payne who inside the 6 yard box directed the cross past Hutton to give Peterhead a commanding lead. Despite the increasingly urgent, and often wasteful, Alloa, Brett Long wouldn’t be called into any real action as the game petered out to the delight of the home fans.

It’s an opening day blow to Alloa’s promotion expectations and one that didn’t escape the criticism of the boss, Barry Ferguson:

“I’m really disappointed, we’re missing experienced players who would be in contention to be in the starting XI but I’m not going to use that as an excuse. It’s not good enough. I know that, I’m very honest, hence the reason I’m a bit later out the dressing room.”

“We had a long chat and we need to go seriously work on things. It’s a fact that Tuesday and Thursday we need to get a reaction for the game on Saturday.”

There’s a lot of things we need to do

“Peterhead were the better team, first to every ball, [and to] every second ball. Which really disappoints me… there’s a lot of things we need to do… not just the players but myself and the coaching staff too.”

“It’s not been ideal with players missing from [COVID-19 isolation] and injuries but I’m not going to use that as an excuse. We still had 14 or 15 players, obviously with a couple young ones. Hopefully we’ll see the players coming back soon. We lost a couple on Thursday night at training aswell.”

“We’ve worked hard in training but today’s not the way that I want my team to play; It’s not the type of performance that we want to see. Next week we will get a reaction because that’s not good enough today.”

“Parry is still part of the squad. I’ll change the goalkeepers again next week. It’s difficult to make these decisions but I didn’t want anyone extra traveling. I wanted Hutt’s in, it’s an area of the pitch I want competition for places. He’s still part of it and a big part of the squad and I want him to fight for his place. In the coming weeks he could be back in.”