Alloa Athletic reached the First Division Play off Final against Dunfermline Athletic after their 4-3 aggregate victory over Brechin City. The Wasps lead 2-0 from the 1st leg at Glebe Park, but an early goal by Andy Jackson got Brechin City back in the tie, Kevin Cawley’s 14th goal of the season levelled the scores on the day. Scottish Cup Final referee Willie Collum, then awarded a penalty to Brechin when Jonathan Tiffoney was adjudged to have blocked a shot with his arm, Alan Trouten dispatched the spot kick. back came “The Wasps” in a game they started to control. Calum Elliot was fouled in the box by Ewan Moyes and the ex Hearts striker slotted away the spot kick with great confidence. In the closing stages Alloa should have taken the lead but bad luck in front of goal saw the Brechin goal lead a charmed life, with Kevin Cawley’s effort come back out from hitting the inside of the the post. Well into stopage time Andy Jackson did bundle the ball over the line but Alloa and their fans knew they had reached the final after Calum Elliot stroked home the penalty kick. 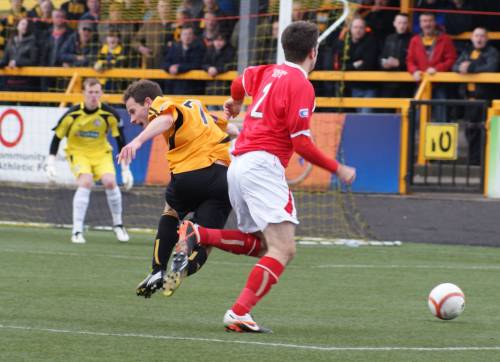 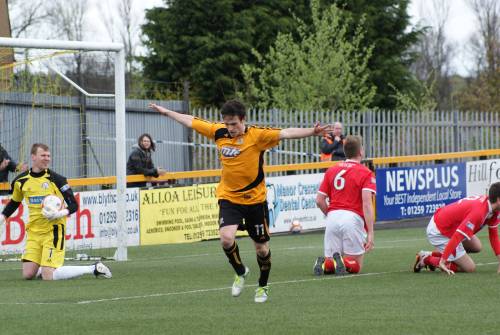 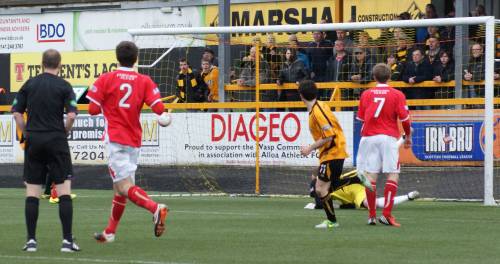 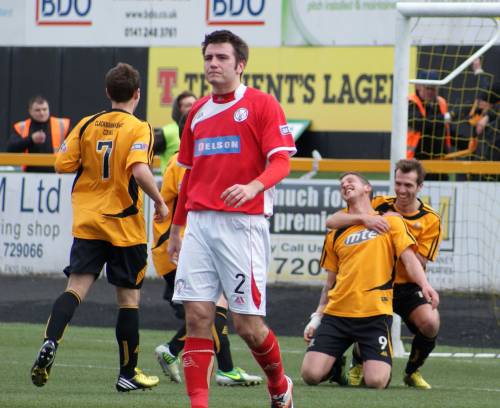 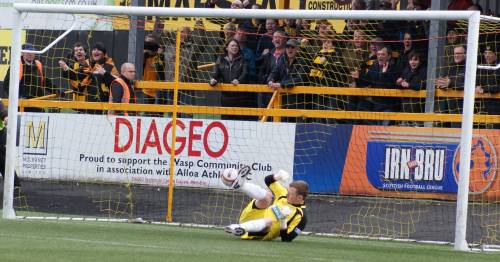 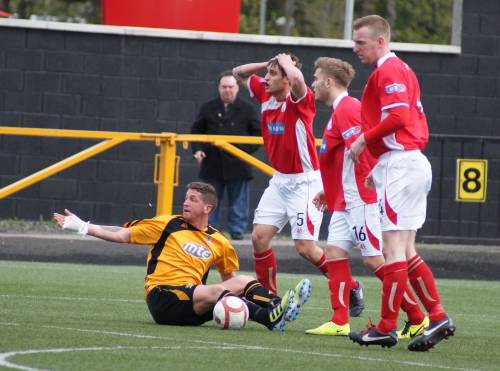 Quite an eventful game, a bit of a roller coaster, thankfully we have a chance to progress into the First Division.  It was a great game, from end to end there were incidents and goals and it was good for the spectators but not good for my heart!  The Brechin City players celebrated their goal close to our dug out and I celebrated our goal which I am entitled to do and then things spilled over a little bit – they thought I was a little bit disrespectful but I thought it was disrespectful of them in the first instance – I think you should be allowed to celebrate a goal but that is the way it goes – there was nothing really in it. After we were sent to the stand it made it difficult as it is hard to get your instructions across to the players when you are up there – it is much easier down there but that’s the way it goes sometimes.  I am delighted for the players because they have worked so hard throughout the season and we have given ourselves a great chance.,  We will hopefully give Dunfermline Athletic a right game – I think on our day we can beat anyone – we anticipate there will be a big crowd here on Wednesday night but we will go into the game and we will have a go in both games we will not sit back and we will try and play as best as we can – I have a good group of players in there , I think we know what is in front of us two games to try and get us into the First Division which would be a magnificent achievement for a club like this. I think we are all looking forward to it – it’s preparation now for the guys – they have to prepare properly, be professional and show that they are ready for Wednesday night.  It’s a great thing for the players and spectators to see the excitement here today and obviously the same at East End Park.  I think we are crying out for something in Scottish Football to make the end of the season a bit more exciting – down in England where you see the play offs it’s a full house.  I am hoping to be back on the touch line on Wednesday and looking forward to it – it will be a cracking game, Dunfermline Athletic have got some good young players but on the day we think we are a match for anyone – we will try and play in the proper way and the proper manner and we will go out to have a right go at them.  We know Dunfermline will bring a big support so it will be good for our players to have that and hopefully our home fans will turn out and support us if it is as good a game as it was today I think the fans are in for a real treat over the next couple of games – that’s what you play football for – games like this, the excitement and to try and get to the next level.