Scottish Cup days are always special and this tie against Inverness Caledonian Thistle was to turn out a five goal thriller, with end to end football but unfortunately in cup ties there can only be one winner and a late goal from Charlie Trafford was enough to see John Robertson’s men grab the all important winner, which to be fair could have went either way.

The Wasps came back twice from going behind with Inverness taking an early lead after only 8 minutes. Ten minutes later however Kevin O’Hara headed home at the near post to score the first equaliser.

For the neutral it was a great cup tie with action at each end, Kevin O’Hara so nearly put “The Wasps” in front but his effort just went past the post. Liam Buchanan was next to watch Inverness keeper Mark ridgers pull off a wonderful save to stop him scoring early in the second half.

Just after the hour mark Jordan White, who has been a thorn in the flesh of Alloa before put Inverness back in front. Peter Grant then introduced both new loan signing Lee Connelly for Liam Buchanan and Robert Thomson for Adam Brown who looked to have picked up an injury, both players made an impact coming on from the bench. Lee Connelly broke down the left wing and crossed for Kevin O’Hara to score his ninth goal of the season and his second goal of the game to draw level at 2-2.

At this stage in the game it would be difficult to choose a winner with little between the sides other than physicality with the highlanders always looking a threat in the air. Four minutes from the end when a draw looked more likely Charlie Trafford was to head home inside the Alloa box and knock “The Wasps” out of the cup.

In the final five or six minutes Alloa threw everything at the Inverness goal but it stood firm. It had been a cup tie which went to the last kick of the ball but Alloa disappointed in getting nothing for their effort.

We now get back to Ladbrokes SPFL Championship action on Tuesday night when we will face Arbroath at the Indodrill Stadium in a massive game for the club. 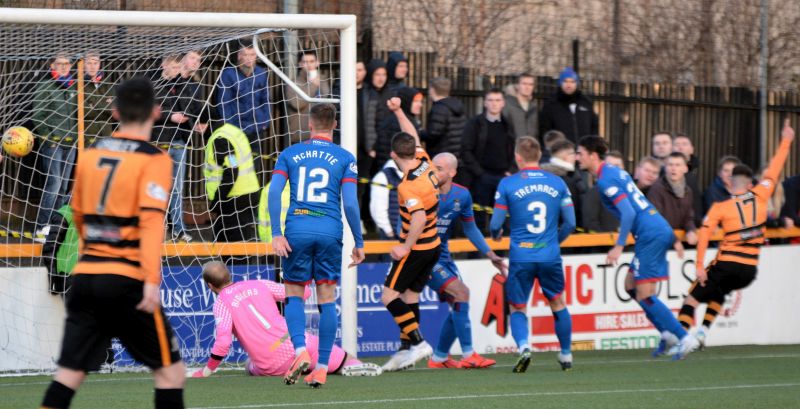 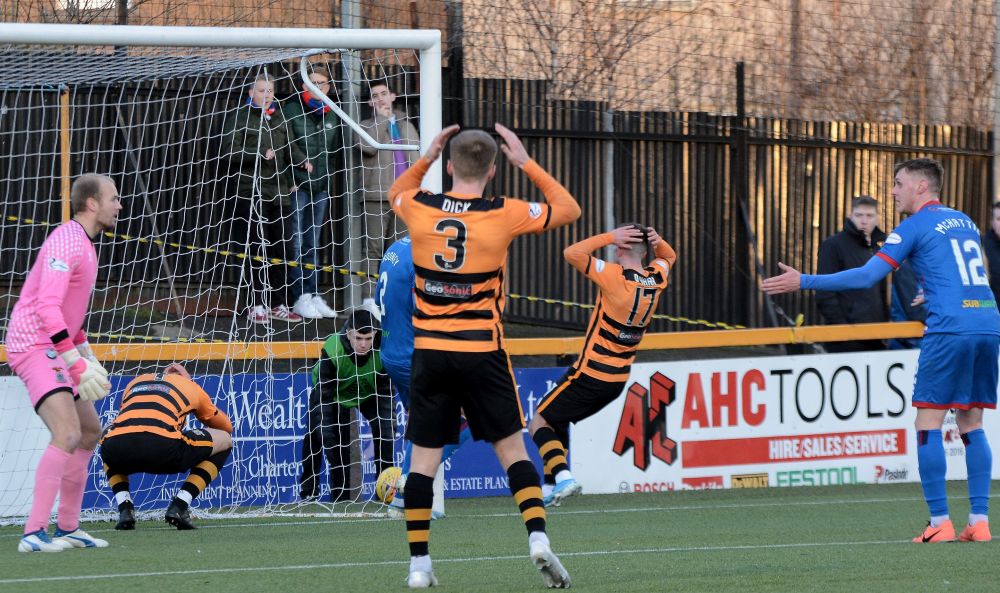 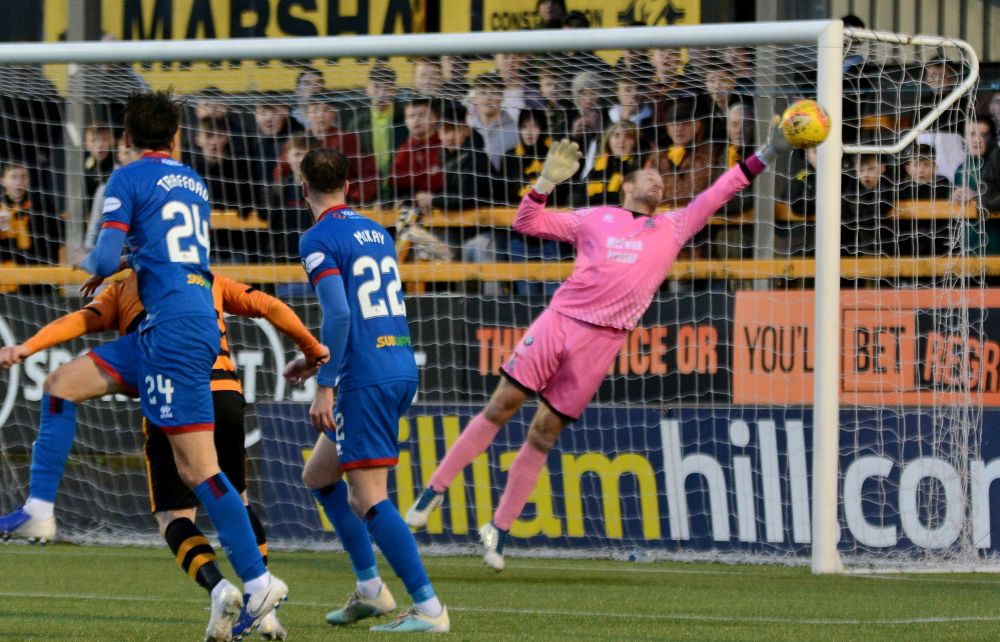 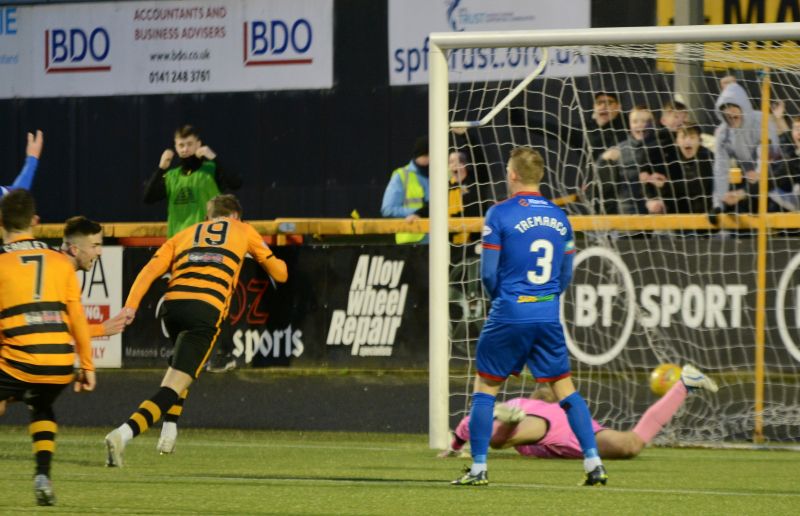 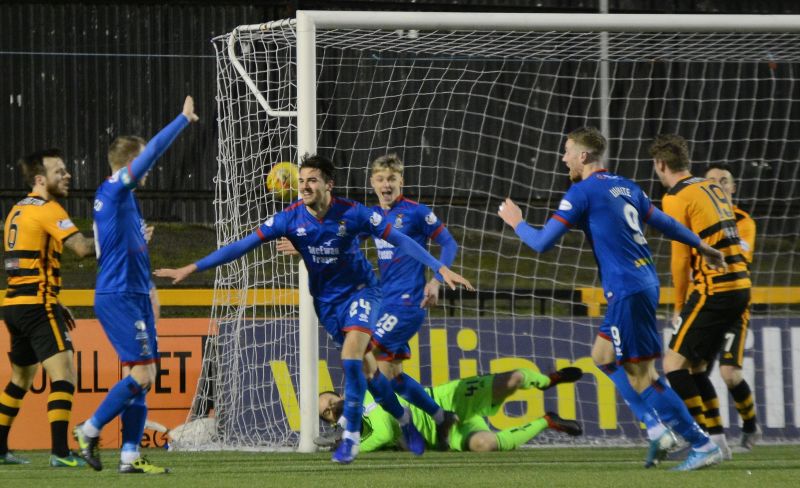 Obviously disappointed to go out of the cup, we got ourselves back into the game at 2-2 and in general in the game we were always in it, people keep telling me about the saves Jamie MacDonald makes but Mark Ridgers had a couple of wonder saves today. As a result I think it is an unfair result to be honest with you but that is what football is it is never kind to you and we have found it difficult to beat Inverness this season, they are a big side and sometimes when you are six foot plus and they are a big side not just one or two off their players over six foot, it makes it difficult to pick them up all the time but we have to be better on the second ball, we have a habit of watching the ball on the first header and I think that’s what cost us late at the end today.

Another two great goals by Kevin O’Hara and that’s why we are delighted to keep him, I think that was very important for us, but you have to give credit to Robert Thomson who came on and did well as did young Lee Connelly who came on for his debut. We had guys out there who hadn’t trained for a while giving everything that they have got and sometimes maybe the fatigue causes the concentration levels at times to fall, these guys are working every day of their lives and sometimes fatigue kicks in and I genuinely think that can happen and I think that’s what happened at the set play, if you don’t win the first ball you definitely need to win the second.

The Scottish Cup is so special everybody loves to be involved in it, it is a great platform for any professional footballer to try and go as far as you can, you always want to put yourself out their when people come to watch Scottish Cup ties that’s what it is all about and that’s why we are disappointed to have went out of the completion.

The boys will now have to pick themselves up and go again on Tuesday night, every game for us now between now and the end of the season is big but this game is massive there is no way of getting away from that, there is not one bigger than the other and I keep going back and people will laugh, on the last day of last season three teams could have went down and yes we know we will be fighting right till the death. Hopefully we will keep trying to get bodies in to add to the squad but it is very difficult because of the financials, not what we are offering but just to get them here – to pay them, stay in hotels whatever, the part we are part-time. Its different if you are full-time you can bring them in and keep them all week, we have to get them here, take them back down the road and bring them here and it works out too expensive and we cannot pay premier league wages that is just impossible for us but we are trying. I have a great group of boys here but it is just having them all fully fit, we will try to get another one or two in but then we have an opportunity to do ourselves justice.