Alan Trouten’s late equaliser was well deserved as “The Wasps” faced Inverness Caledonian Thistle for the second week in a row having returned empty handed last week in the Tunnock’s Caramel Wafer Cup. Manager Peter Grant always believed that they could take something from The Tulloch Caledonian Stadium having watched his side create chances the previous week.

A great passing move by “The Wasps” on the right side of the pitch saw Kevin Cawley playing in Liam Buchanan to curl his effort past Mark Ridgers for his fourth goal of the season after only five minutes.

“The Wasps” were certainly holding their own in the first half and nobody could complain about them going in ahead at half-time. In the second half Inverness were to draw level just after the hour when their captain Carl Tremarco unleashed a shot which flew into the top corner of the net.

As the game entered the final ten minutes it looked as if the match would end drawn but there was still drama to unfold. The home side were pushing for a winner but Alloa were still creating good chances,  Andy Graham’s header just went wide from a corner before Jordan White grabbed what looked like it might be the winner heading home five minutes from the end. However Alloa never gave in and that man Alan Trouten ghosted in at the back post in the closing minutes to knock Inverness CT from the top of the league table with his seventh goal of the season. in time added on Inverness CT substitute James Keatings again nearly stole the points with a free kick which struck the cross bar.

At the end of the day it was a good point away from home and thoroughly deserved.

Thanks to Ken Macpherson from Inverness CT for pictures 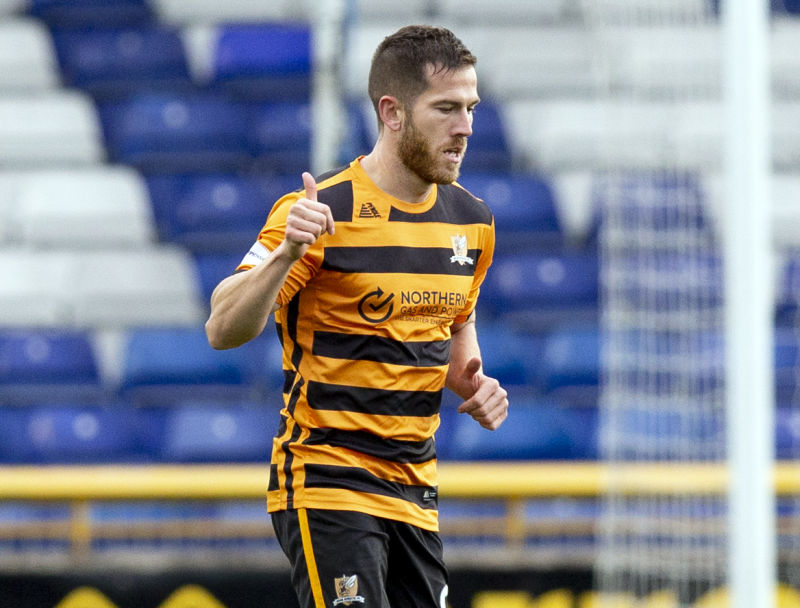 Thumbs up from Buchs 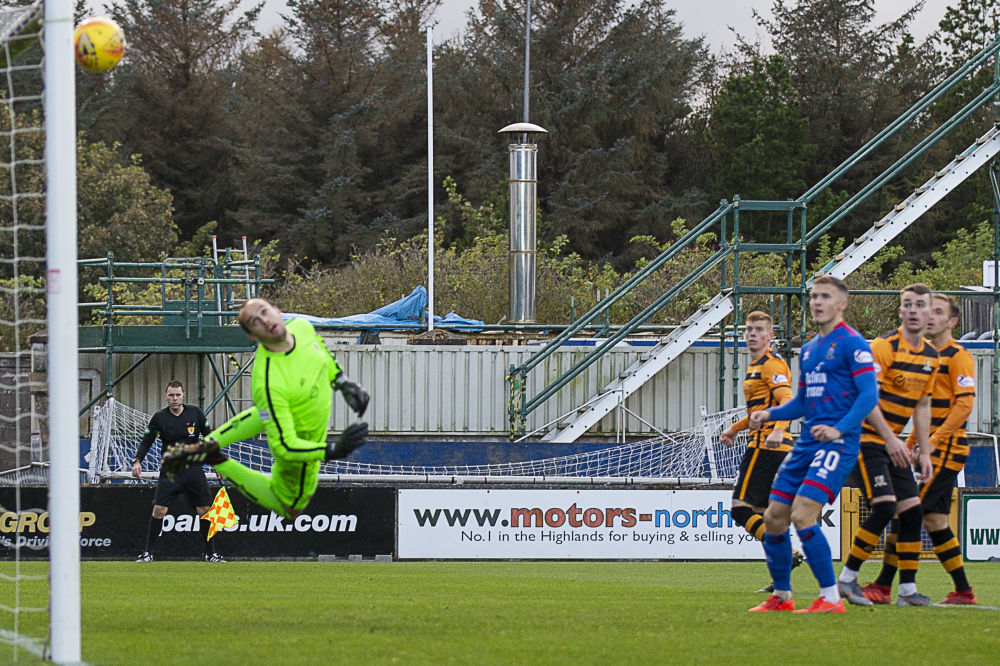 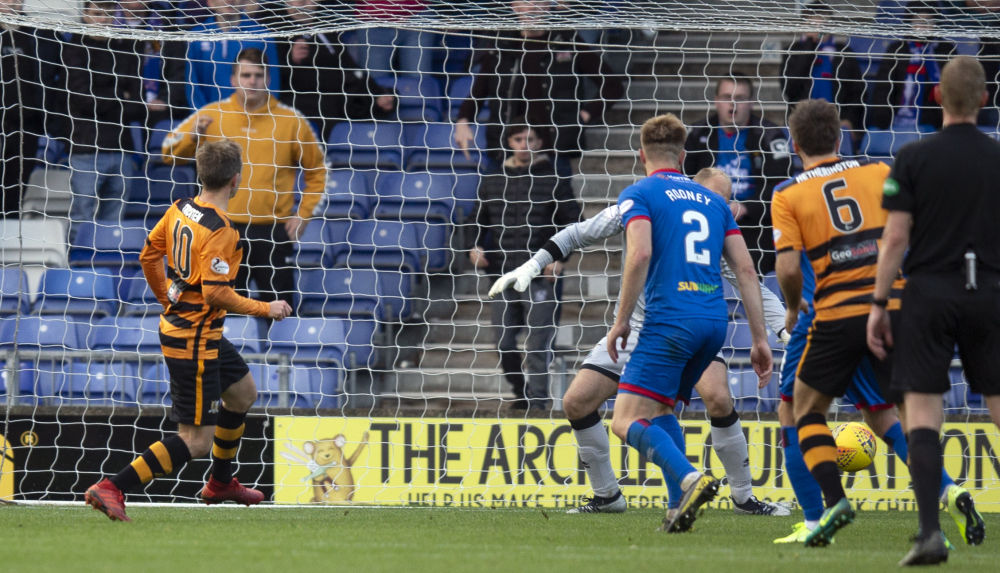 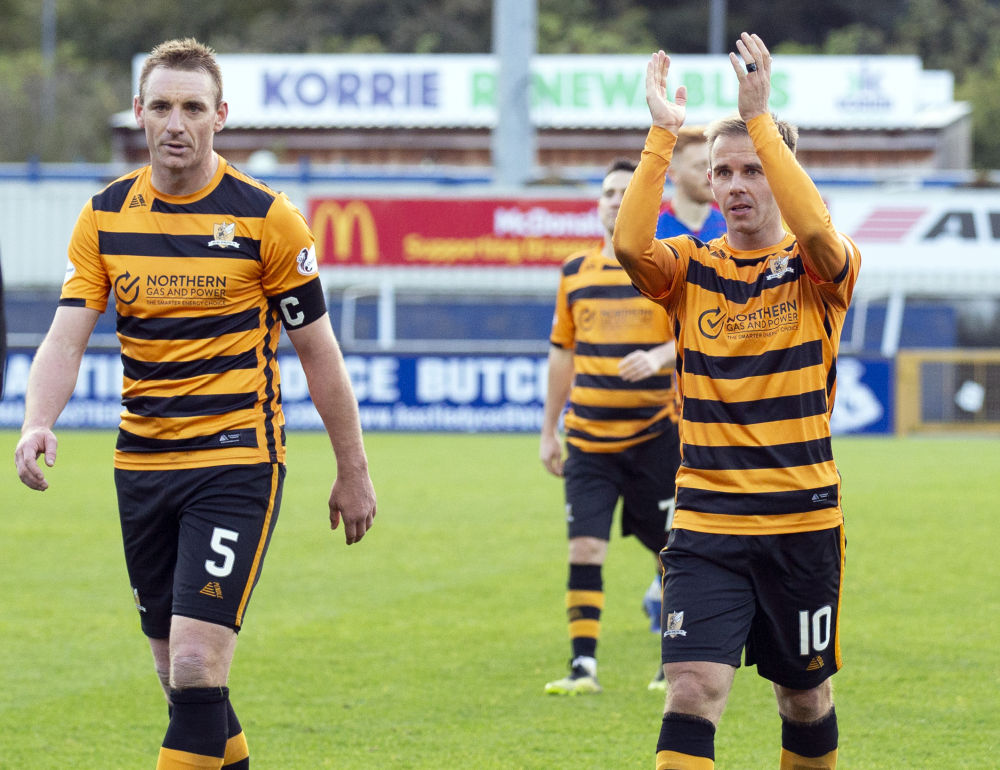 Thanks to the travelling fans

Today was like other games in the fact you are pleased with certain aspects of the game and there are things you are disappointed with, young Nathan who was making his debut done tremendous against two wide players who are probably as good as any other in the league, he made one error and that shows you the difference at the levels when you come up into first team football, that’s what people are capable of if you make a mistake and you get punished, the timing of the goal wasn’t great but up until then both teams tried to play, there were chances in the game but I thought we created as much as Inverness Caley did and I was very pleased with a lot of today.

We were always in the game, the second goal took a cruel deflection but then after Alan Trouten had a great opportunity at a crucial stage in the match which came of the post, we are a team who will always create chances and I think we have the players to be capable of doing that. The goals we lost, the referee has to look at himself especially at the last one, and if that wasn’t a push I have never seen a push. We are used to these decisions just now, I have said before “ I think it is poor old Alloa” we can give decisions against them and it doesn’t matter but it does to us because the boys work extremely hard and I get really disappointed for them because I think certain decisions in the game went against us, anybody who seen when he gave a free kick and it’s our free kick, they take it quick their player was offside, brings it back and still makes them take it again, some of the decisions were quite incredible but that never cost us the game.

I thought a lot of good football was played by both sides but we now need to move on to ne0xt week and come back here again knowing it will be another very though game. Every time you take part in a cup tie you want to win it and tonight there is disappointment in our dressing room because we are out of the cup, people might laugh at it but there is nothing better than to pick up a badge or medal at the end of the season that is what everybody wants to do in their footballing career, but we will be back here next week and our concentration now is the league programme, but as  I have said before anybody we play will know they have been in a game and Inverness would have known that today, we also knew we had been in a game because they are a good side so we know we will need to be at our best next week and hopefully I will have more players to chose from.