Alloa Athletic and Partick Thistle met for the third occasion in the Ladbrokes Championship this season and remarkably all the games have ended 1-1. However on this occasion some contenious decisions were to grab the headlines rather than the fact it was a good end to end advert for good attacking football from both teams.

The first big call was as early as the 9th minute when Kevin O’Hara’s shot looked as if Scott fox had scopped it from behind the line.

Four minutes later it was Thistle who were claiming a goal when Sean McGinty’s netbound header was cleared off the line by Kevin Cawley. Ex thistle striker Liam Buchanan was shotting on sight and was unfortunate with a couple of efforts which just cleared the bar. just after the half hour Kenny Miller had a fantastic effort which Jamie MacDonald did well to push over the bar.

Alloa took the lead after 62 minutes when Adam Brown scored for the second game in succession, his shot taking a defelection of Steven Saunders past Scott Fox in the Thistle goal.

On 72 minutes referee David Munro awarded Partick Thistle a penalty, claiming the ball had struck Robbie Deas on the hand, Stuart Bannigan took the kick which was saved by Jamie MacDonald who was in inspirational form.

Two minutes later the referee awarded Thistle their second penalty of the day, with the ball heading beyond the back post and over the bar Joe Cardle went down under a challenge from Blair Malcolm. Stuart Bannigan again took the responsibilty and scored to draw the game level.

The visitors had the better of possesion in the second period and finished the game strongly, however “The Wasps” held firm and the game ended 1-1. Given the fact manager Peter Grant was without three first team regulars in Andy Graham, Alan Trouten and Liam Dick a draw was a fair result in the end. 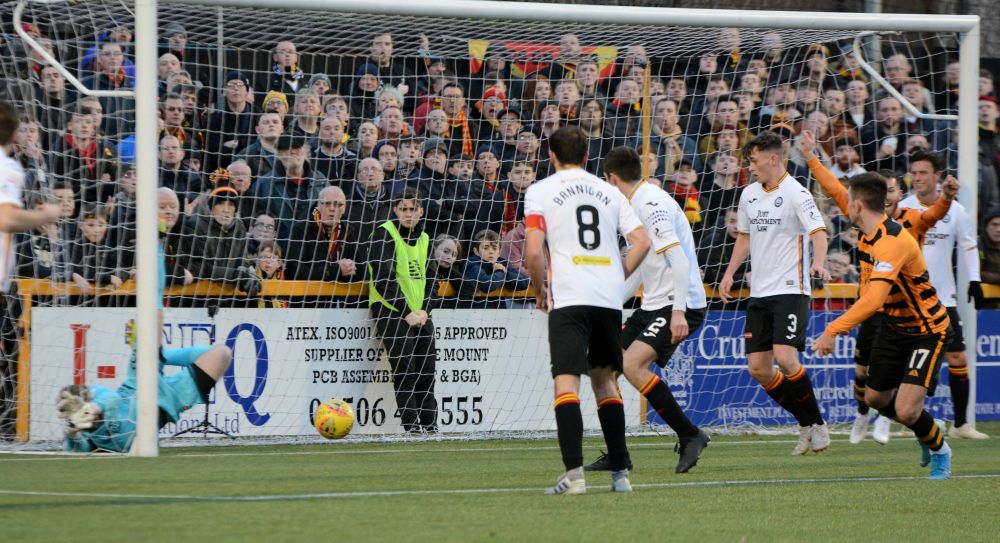 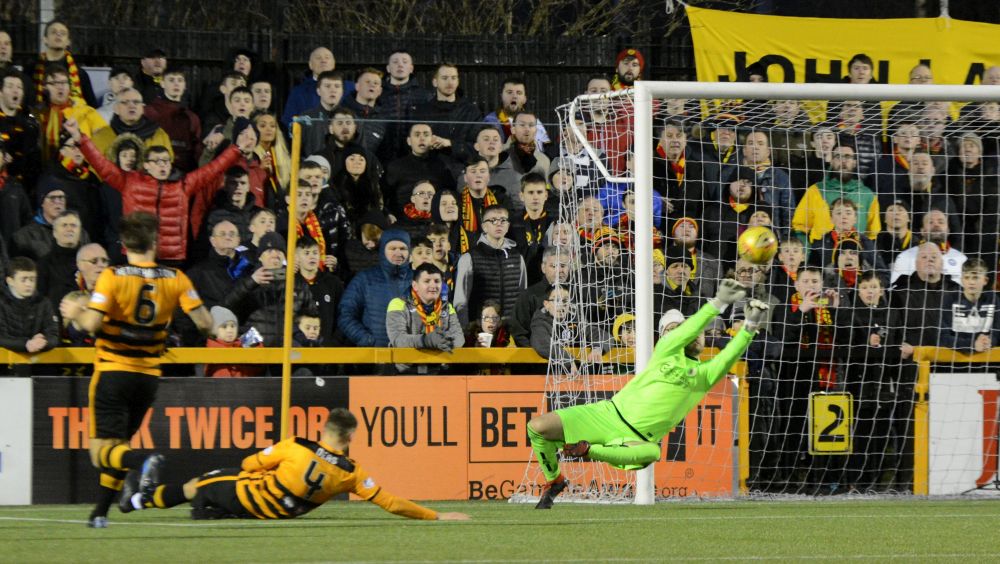 Jamie MacDonald pulls off fantastic save 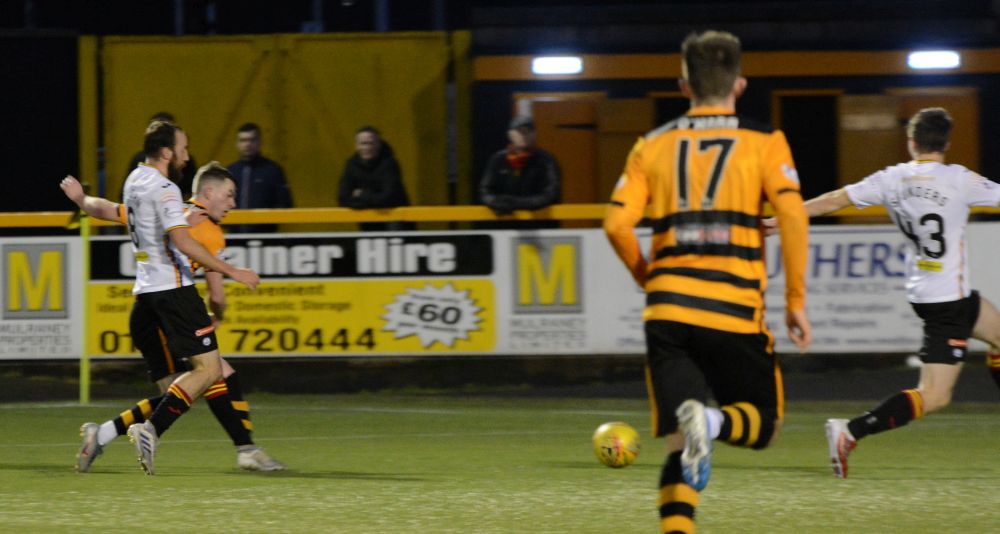 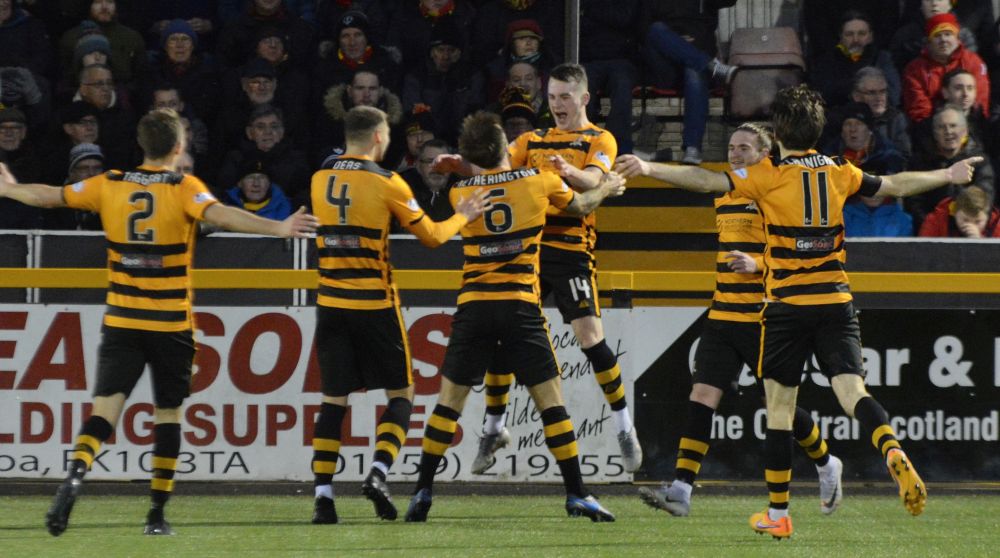 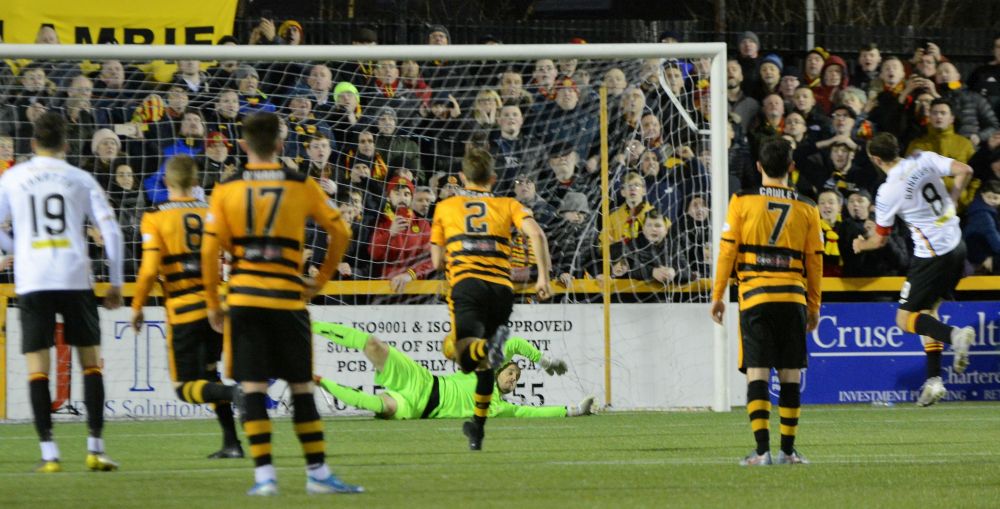 Frustration is probably an understatement today, I think some of the decisions, which I said after the first penalty, he is desperate to give another one, I had hardly had said the words out of my mouth and the second penalty kick was given. I just thought how can the ball travel 30 yards by the post and over the bar become a penalty kick? I have watched it back, Joe Cardle has actually fell and young Blair Malcolm puts his hands on his back as Cardle’s fell and he gives a penalty kick which was disgusting to be perfectly honest with you.

I thought it was a proper game with two teams trying to win, Jamie MacDonald had some great saves from distance, which is what we expect from him but their goalkeeper also had to make great saves as well, it was a good Championship game, just disappointed that it will be remembered for the wrong headlines.

I have been asked did the effort in the first half cross the line when Scott Fox appeared to scoop it back, when Scott saved, it actually hits the net when he saves it but I couldn’t pass judgement on that one. This is where the dialogue with referee’s, or their supervisors who come to the games would help, rather than come back later and agree that was an error or mistake because if these were penalty kicks, God Almighty! There is no point trying to speak to the officials after the game, it’s a waste of time. Managers lose their jobs, players get criticized for missing chances, there could be ten guys watching up stairs but it doesn’t matter because nobody hears want they do. It is unfortunate on the linesman because I was battering his ears and I have sympathy with them, there was an incident in the middle of the pitch just after Kevin Cawley had been smashed for the same thing and that’s the frustration I now do not know what is a free kick or penalty kick. If he is saying it was handball in the box then the ball that drops over the players arm right at the death in this corner, hits him on the back of his arm, the boy doesn’t mean it but it hits his hand, so if the first one was a penalty kick then that also must be a penalty kick and that’s the frustration but I did believe it was a proper game, as I said when Ian McCall went in at Partick Thistle they would be the least of my worries because they would have enough players and quality to be fine.

Now all of a sudden we have a wee run but we still have players unavailable and I think people forget that, we are doing this with guys who have came in and to a man have been excellent, I have been chuffed with them, last week I said I was proud of them and they keep going again today but there were periods in the game we should see out. If we go 1-0 in front we should stay in front, because we are good enough with the ball to do that but to do that you need a little help at times and I do not think we are getting that.

Everybody’s talking about Jamie MacDonald and nobody was touching him, it has worked very well for us and Jamie remembering he hadn’t played for over a year, he has said that himself and he is a fantastic professional, our situation is as soon as Neil Parry is fit, Jamie has to go back but Neil is a long way off to being fit, so I am hoping we can keep Jamie but that is not in our hands, medically we can keep him on an emergency loan but we never know what Kilmarnock might want to do with a change of management at the club.

We have played really well, probably about 3 or 4 times maximum we have not played well, I just think incidents when you are playing against teams with a big support and they are behind that goal and there is half a decision going to go and the crowd make a roar and I played with a team which was similar so I know what it is like there are decisions being made and they are not the correct decisions and that happened today but it has also happened before. It happened at Dunfermline we were winning 1-0 and the ball hit their strikers hand and leads to a goal it is no goal, the ball came off the boy Nisbet, he didn’t try to handle it but it came up hit his arm and he played it to the side and they score and got an equaliser, so that’s where my frustration comes from – I just do not know what a free kick is nowadays and every week you ask the linesman and I feel sorry for them because I am bursting their ears at times but they need to agree with the referee on the pitch, so they can surely see because I am watching it but they don’t ask the referee or come back and that is annoying.

Thistle finished the game strongly so maybe a draw was a fair result at the end of the day, but the way we drew the game was disappointing.