Four back to back defeats in the league have seen “The Wasps” move to the bottom of the division. People had written Jim Goodwin’s men off before a ball was even kicked this season, a lot of good has been said about the team this season already but with eleven games left the players will need to fight with their chests puffed out and heads held high to turn round recent results.

For “The Wasps” this was another frustrating game, the result and the fact we are not getting ahead in games at present and the faux pas that have led to the loss of cheap goals.

Taking the lead gives you a platform and that’s exactly what happened after only four minutes, Partick Thistle are fighting for their lives and they got the vital breakthrough.

Alloa couldn’t penetrate Partick Thistle’s sturdy, well-drilled resolve with Steven Anderson a rock in “The Jags” defence. Thistle were under pressure at times before the important and killer second goal but they stood up to it, which earlier in the season they might have buckled but Gary Caldwell’s new look side look to be made of sterner stuff.

However, Scott McDonald’s goal eleven minutes from time, clinched a massive win for Thistle taking them off the bottom of the league into eighth position, thistle now unbeaten in their last five league matches.

The Alloa players efforts could not be faulted, they will fight and give us more to be proud of before the end of the season but with only one shoot on target on Saturday, when Jack Hamilton’s effort was blocked on the line, we need to be more positive and put opposition keepers under more pressure, on Saturday the Thistle keeper choose to run the clock down from early in the game. 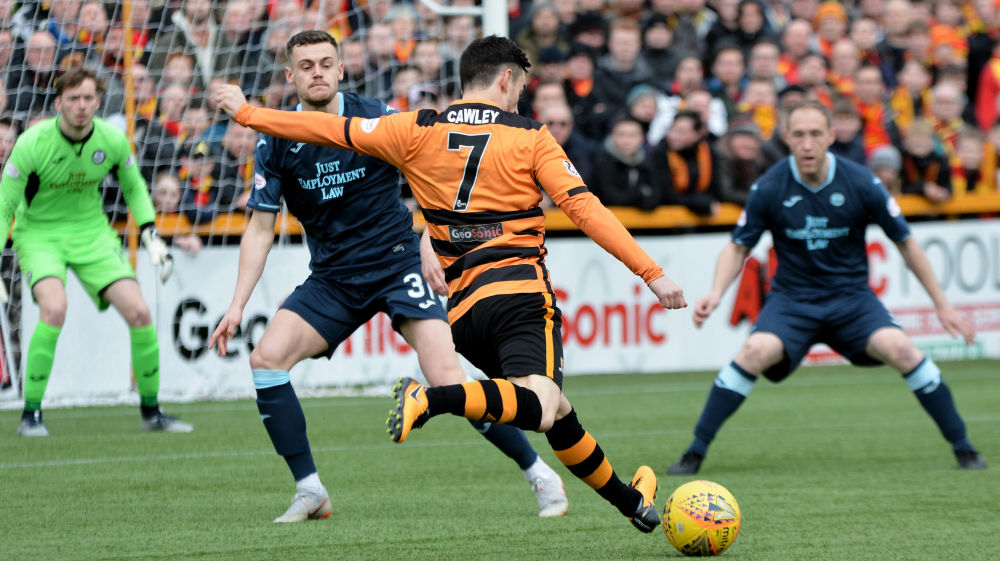 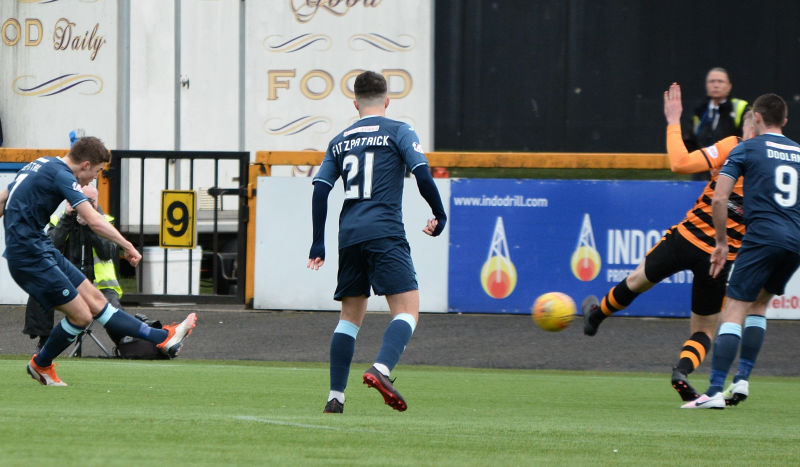 Blair Spittal puts "The Jags" ahead after only 4 minutes 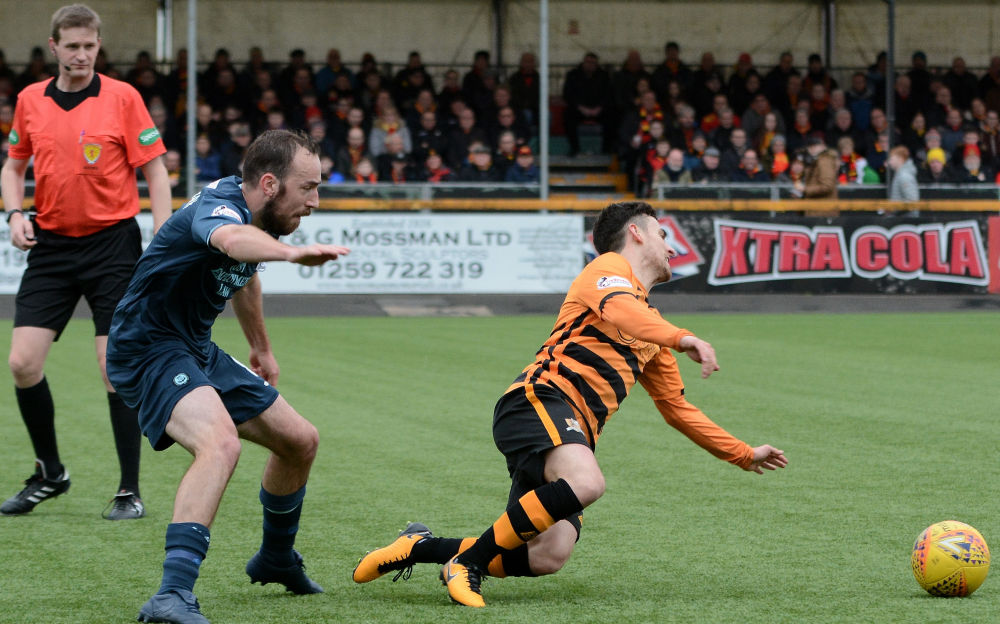 Kevin Cawley is chopped down in front of referee 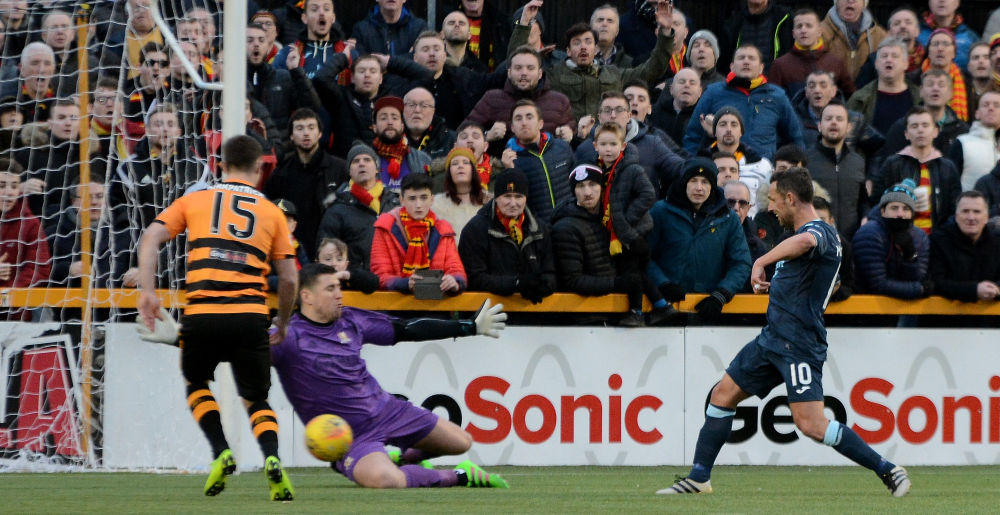 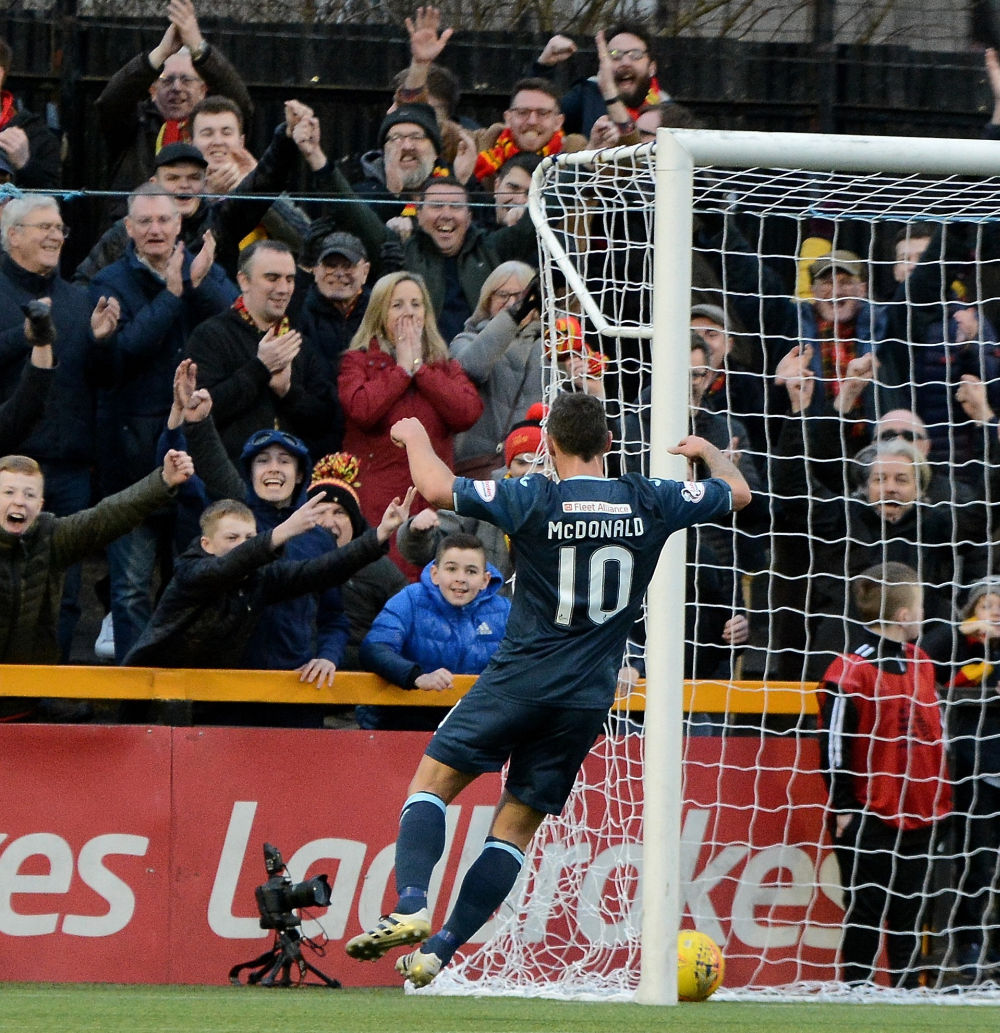 Jack Hamilton's effort is blocked on the line

jim goodwin after defeat against partick

We were looking forward to the game but the game plan went out of the window after losing a goal in only three minutes, we were then chasing the game from then on. I have spoken enough about the cheap goals we are giving away, I don’t think in our last four league games the opposition hasn’t had to do a great deal to score and that’s the disappointing thing for me because it is the same group of players, the tactics are the same as they were in the first half of the season but for whatever reason we are just giving sloppy goals away. The first goal was a poor goal, we have to defend the cross better when it comes into the box and the second goal as well is poor defending. I would love to be able to give the opposition credit in terms of that they had cut us open or the played some great football there, or it was a fantastic free kick but lately I haven’t been able to say that. And that is because our defending at times has just been so poor and that puts us on the back foot and straight away you are chasing the game. Partick then could afford to come off the game, like they did, I think they started to run the clock down from about the fifth minute of the game it was incredible.

It was very frustrating from the side lines you want to try and get a little tempo and get some urgency in the game, but it is very difficult when they are taking half minute each time to get the ball in play every time the ball went out. It was a frustrating afternoon but we just need to pick ourselves up again it is as simple as that. We need to stop giving ourselves a mountain to climb each week, it would be great to get our noses in front and see how the opposition react and then maybe we could take or feet of the gas and let the clock run down,.

We are very disappointed we have now lost our last four league matches but at the same time I have said to the players that we are only seven points adrift of fifth, the league is really tightening up. This time last year it must have been very difficult for Brechin City when you consider they were only sitting on three or four  points, and they were relegated and it was a formality where as from our open point of view we are still in it, we have a lot to play for and it is really important we don’t get too down on ourselves, we have put ourselves in a really good position, unfortunately we are currently on a bit of a bad run but four games prior to this run we had gone six games unbeaten.

We are a good team I believe in the players , I think we actually played well today and I believe we played some good football at times today, possession stats are great but at the end of the day what matters is who scores more goals than the other team. Next week we need to look to bounce back in what will be another difficult game against Queen of the South at Dumfries. But we need to get back to winning ways.