Alloa dominated the ball and possession and controlled the tempo of the ball, the most surprising statistic is it took until the 33rd minute for the home side to go ahead, Steven Hetherington long range effort deflected by striker Alan Trouten for his fourth goal of the season.

The Wasps surged in confidence but didn’t do enough in the final third, some of the football was a joy to watch but needed a bit more composure and quality, Jamie Sneddon not being troubled enough.

Partick Thistle started the second half in a more positive manner and for the first time in the match started to trouble the home defence. Thistle were to be rewarded on the hour mark, Neil Parry who had had to look lively in the Alloa goal saved well but knocked the ball onto the far post and Joe Cardle scored the equalising goal netting the rebound.

Peter Grant’s side can take great credit in how bravely the fought in the game and can be aggrieved at not collecting all three points. However our goalkeeper Neil Parry once again had to put off a World Class save to deny Thistle stealing all three points. 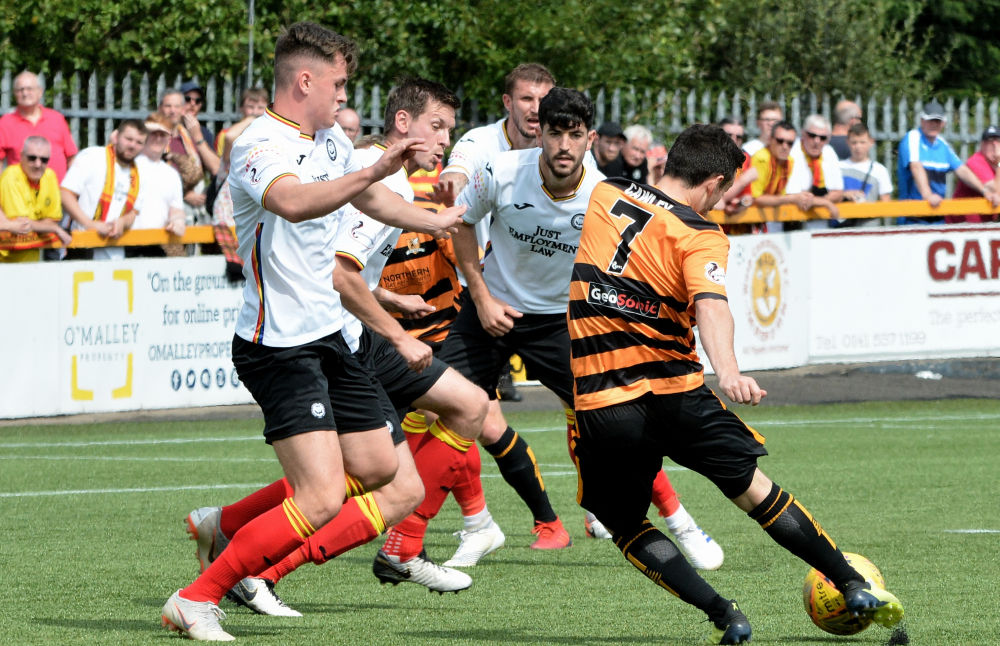 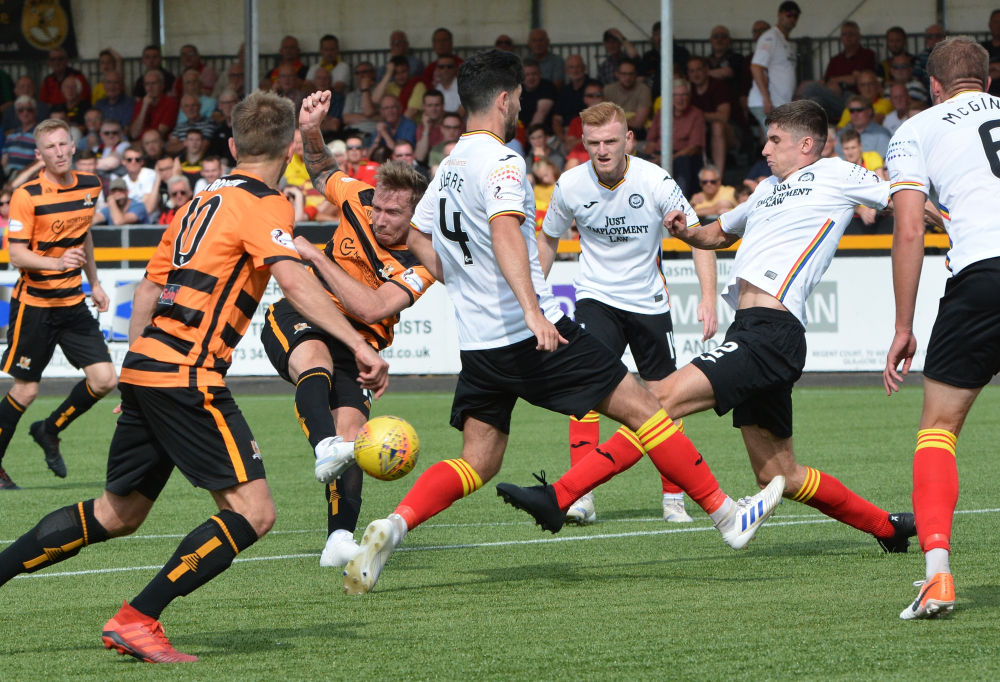 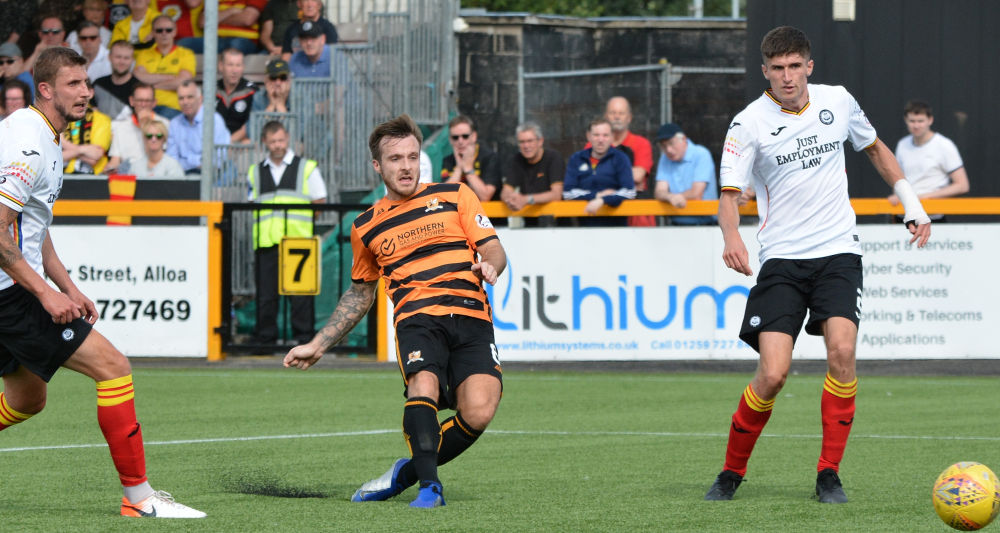 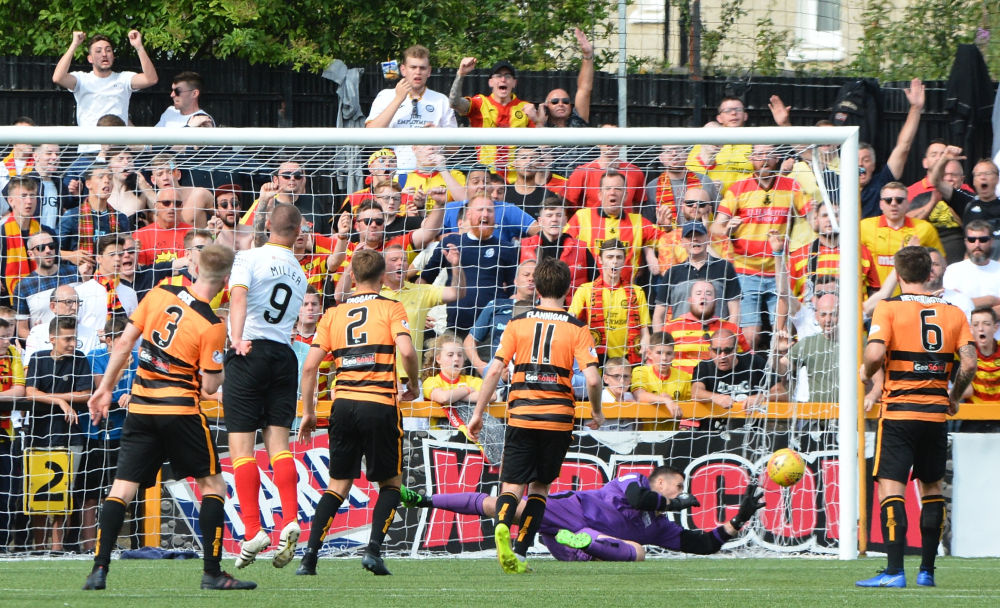 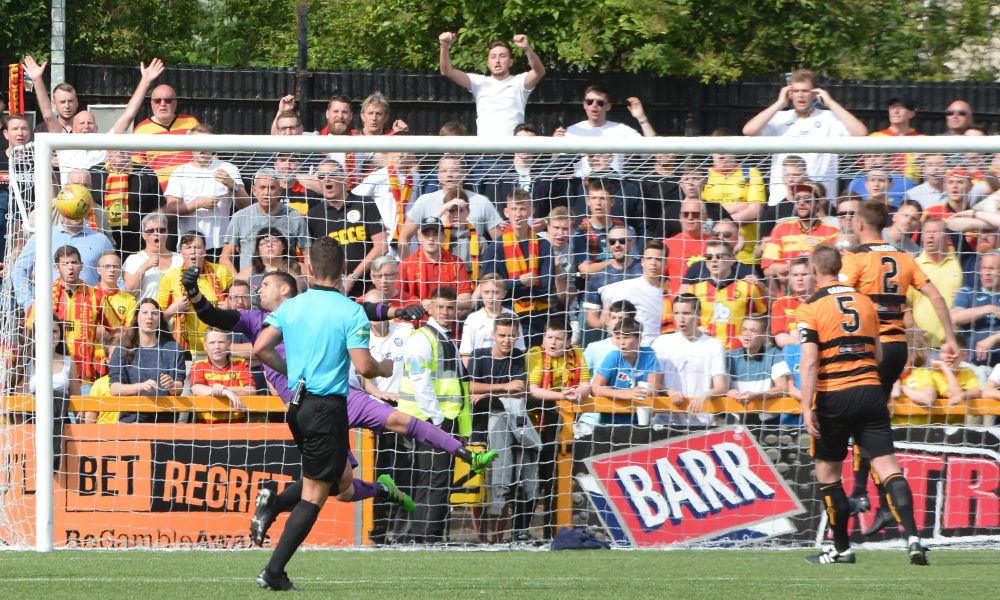 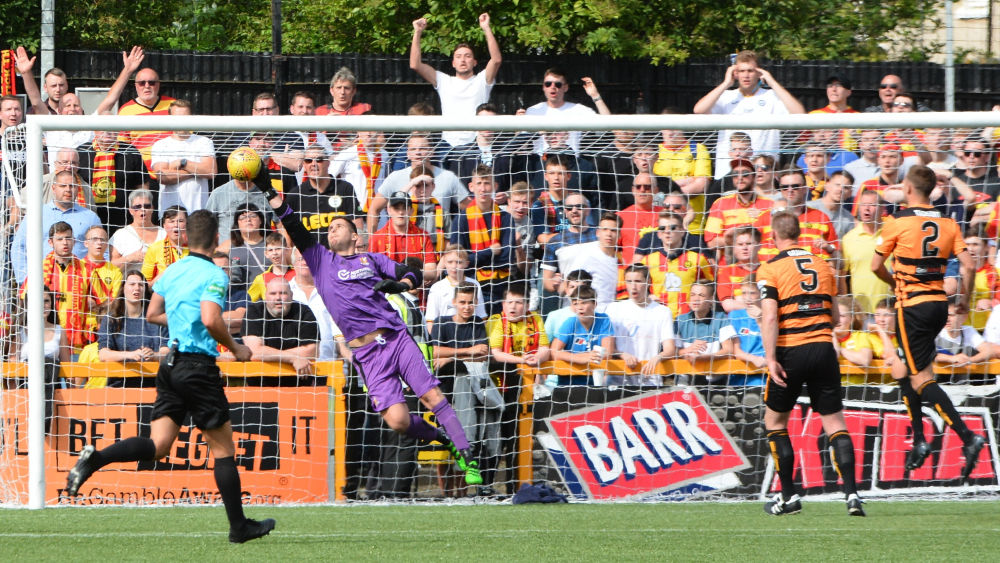 Neil Parry makes great save but knocks ball back off post 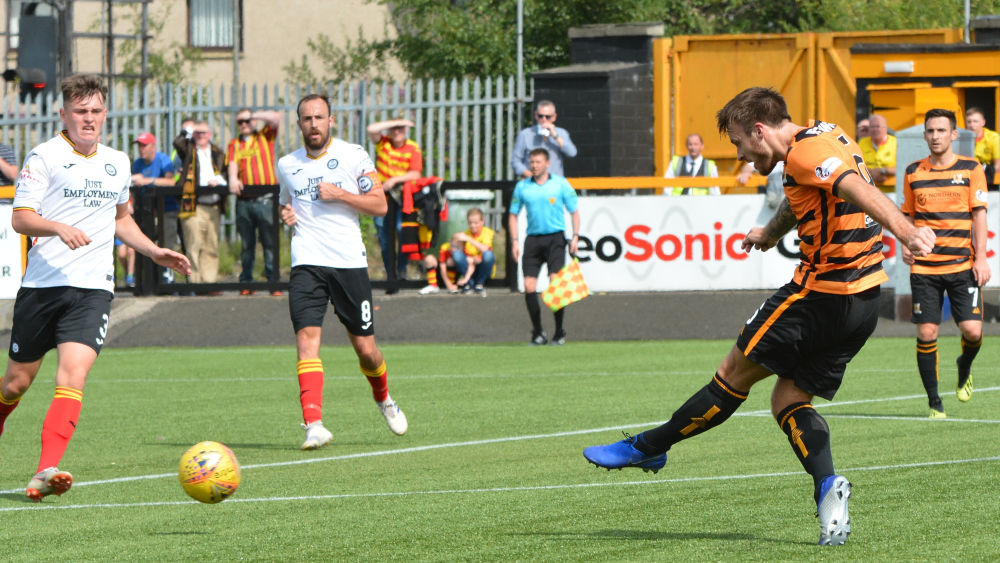 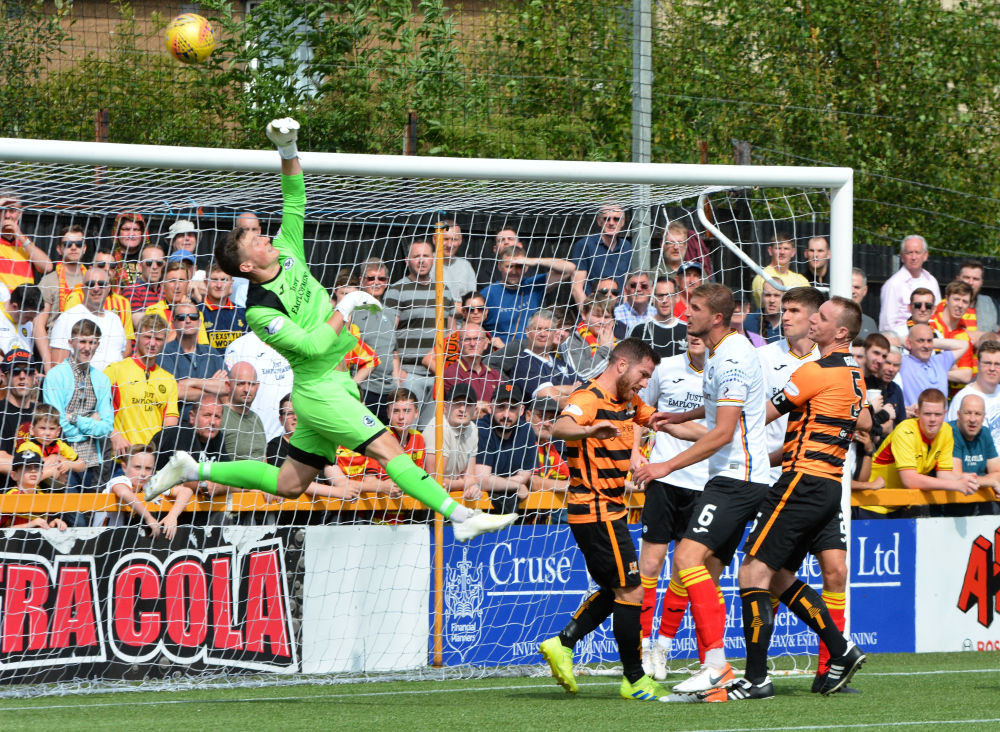 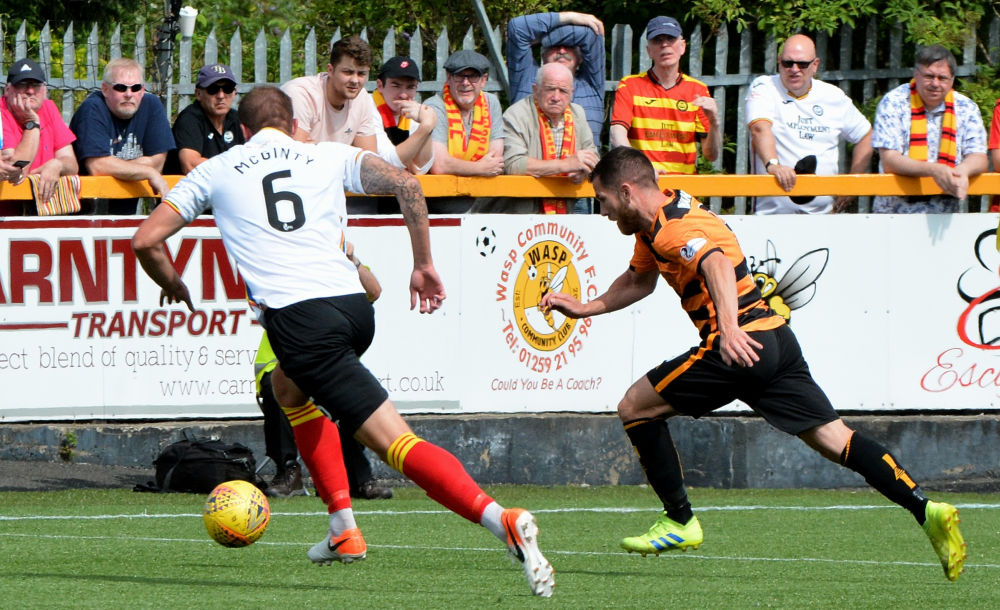 Early signs the Thistle fans know they are in a game

I thought we were very good at certain periods of the game but you know you will be under pressure at some time when you are against some very good players, it’s a tough league as people say you are never out of it and I said that to the boys at half-time, they had dominated so much with the ball, without really creating as many chances as we probably wanted or taken many of the chances we created, but then it takes two world class saves from Neil Parry not to lose the game. He is a fantastic goalkeeper but I think the players deserved more out of the game there is no doubt in my mind, but that’s the way the league is. I was at a game last night and I saw the exact same thing for Dunfermline Athletic, they dominated, got a bad decision against them and all of the sudden they were on the back foot a little. However I have to say I was really pleased with a hell of a lot of the game and I would be picking at things to say anything else, it’s a start for us and hopefully people have seen how this group of players, which Jim Goodwin assembled and have done exceptionally well, with a fantastic work ethic and we are now just looking to add wee bits and bobs to it to make them better and hopefully people see some of the things that we were trying to do today.

The players are comfortable on the ball and I think that is important in how we want to play, we have to trust ourselves, I have never went to a game and worried about anybody we will be facing and I am not going to start now, I have to worry about our players being brave enough to take the ball and they have done that and shown that, in every game they have tried exactly that, yes we have had errors, getting caught in possession and giving chances away but that is my problem to sort, that’s down to me. I want them to take the ball and be brave in possession because I think you can create chances it’s just a matter of taking them. When you don’t have the ball we are a very hard working team and I am sure you have seen that today, the work ethic of the players is phenomenal, it they can add their football talent and how they were knocking the ball around, especially in the first half and we knew it would be tougher in the second half, with a bit of a wind up against you and Partick asking more questions of us playing more balls into our box, but I thought we were composed and created chances but in the end still felt we had dropped two points.

The Robbie Deas deal is one I had looked at right from the start, I understand Celtic’s problem in the fact Robbie currently has a slight strain and has missed a couple of weeks in pre season So I think he will be important for us, I saw quite a bit of him last season when on loan to Cowdenbeath and I thought he did exceptionally well, I know he has been schooled the proper way in how he would play and that is important for any of the boys we bring in here and how they will have an effect on the group because this is a very tight knit group, it’s not just the playing side, I have to look at the character of them as well, because what has been built here over all the managers is a fantastic group of players and I do not want anybody coming in here who could be a bad egg and upset them, because it is so important in how we are trying to play and I have no doubt if it happens with Robbie he would be a big asset for us and it is something I look forward to him coming through the door.

I am still looking to bring in another one or two, but the most important thing for me at this time, I have taken in a lot of games since I have come up, I have seen a lot of players but the pleasing thing for me is, the boys I have went to see are not any better than the boys I have here and that’s the pleasing thing for me and the only guys who would be coming in here are guys who I feel can make an impact on this team, wither that is from the bench or starting a match, there will be nobody coming in here just to sit about and not raise the bar. The group we have earned their place by staying in the league last year, now we want to improve on that, up there challenging, we have started the race we want to go and give everybody a game and make sure when they come here they know they have been in a game and I think Thistle will go away and say that today.

Next week we face Greenock Morton and a possible family feud, it’s the first time I will have played against Peter, I have played against Raymond quite a few times at Fulham and Norwich, so it is never easy for them and it is never easy for me, I think he will put his phone off because I might try and phone him at four in the morning to wake him up or find out where he is staying and throw stones at his window! No I am looking forward to the game, he has done fantastically well albeit unfortunate with injuries but he is now back fully fit so God willing he has a good season but only if it starts after next week.

Changing the size of the pitch was proven today, we are comfortable in possession of the ball, I don’t want the opposition thinking they are comfortable on the ball and I found at every set play against us in the final third, its ended being a corner against us and I believe it was so important to the way we want to play. All the top managers tell you, that you need space to play in and I think with the players we have we need the space to play in because we have some special players at the club who are comfortable in possession of the ball, so it was a no brainer for me to go and make the pitch as big as we can, because we are very good on the ball and very fit which is again great credit to the previous managers, especially Jim Goodwin last year who assembled this group of players.