fter last Saturday’s victory over league leaders Ross County, Jim Goodwin’s team made it back to back victories at such an important stage of the season, “The Wasps” winning for their first time at the Falkirk Stadium which opened at start of Season 2004/05. Alloa Athletic last defeated Falkirk in the league away from home on 15th September, 1982 when Scott Murray scored in a 1-0 victory, their last victory at Brockville was in the League Cup on 24th August, 1983 when they won 4-2 with goals from Willie Garner, Frankie Cole, Davie Lloyd & Gary Thompson.

Manager Jim Goodwin looked to build on last week’s victory and looked to get forward at every opportunity, Dario Zanatta’s pace and direct running was causing the home defence problems with Jack Aitchison also looking sharp up front. The opening goal came after 38 minutes and was no more than the visitors deserved who always looked dangerous on the break.

Falkirk could not have had a better start to the second half, after 25 seconds the equaliser came when a cross from the left wing was turned home by a combination of Zak Rudden running into the box and defender Scott Taggart trying to knock the ball clear and diverting the cross ball past Neil Parry.

At this stage in the game Falkirk had their best spell and only stout defending kept the home side from taking the lead. Zak Rudden, Aaron Jarvis and Deimantas Petravicius all going close.

However with time running out and the game looking to be heading for a 1-1 draw, manager Jim Goodwin repaced Alan Trouten with Jordan Kirkpatrick to try and winn the three points and Jordan was to be the hero scoring with his first touch of the ball, Jack Hamilton heading forward a long clearance onto Kevin Cawley who nodded the ball onto Jordan Kirkpatrick who ran behind the Falkirk defence to score such a valuable winner for “The Wasps” who kept on believing they could win the three points. 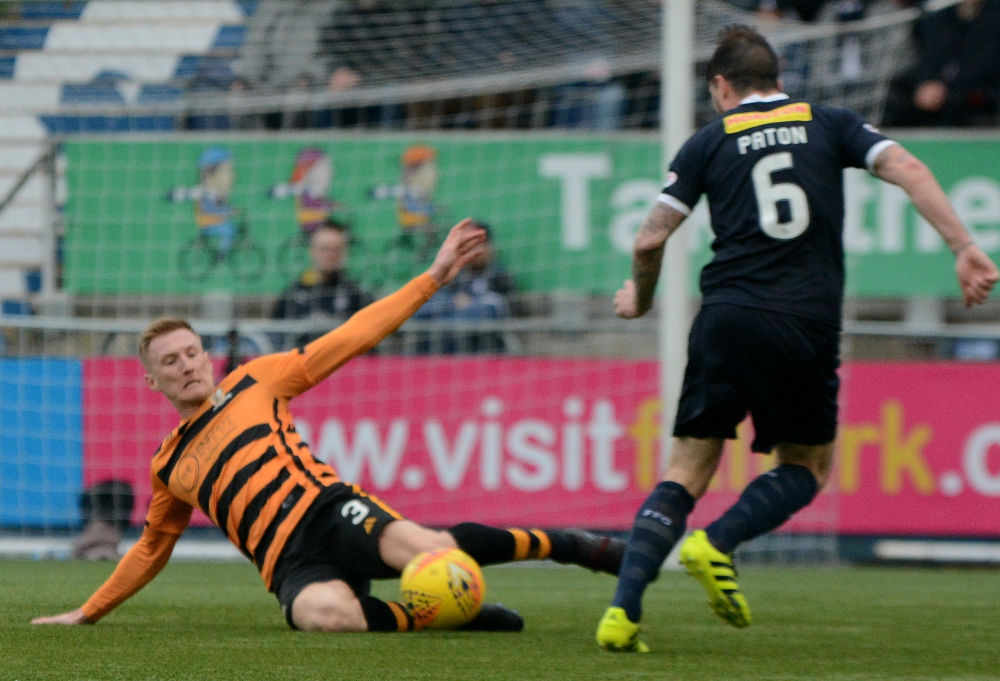 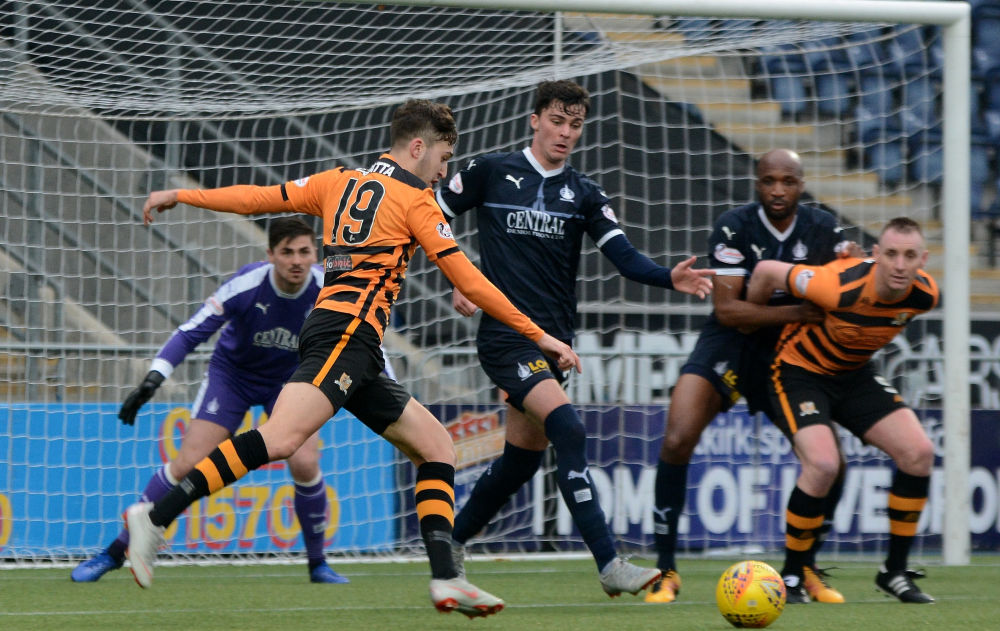 Dario Zanatta's shot goes through a cluster of legs 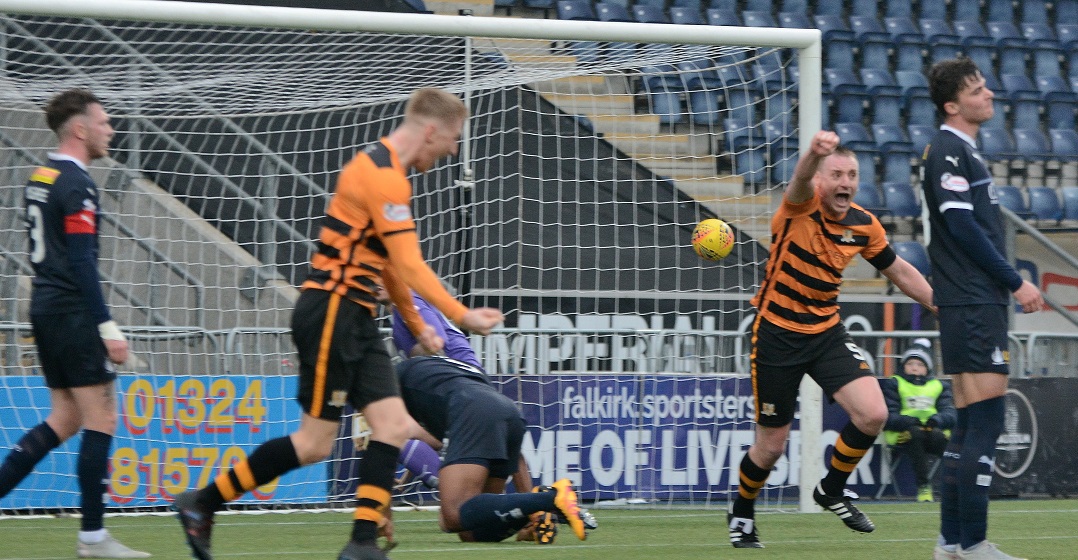 Scott Taggart own goal for the equaliser 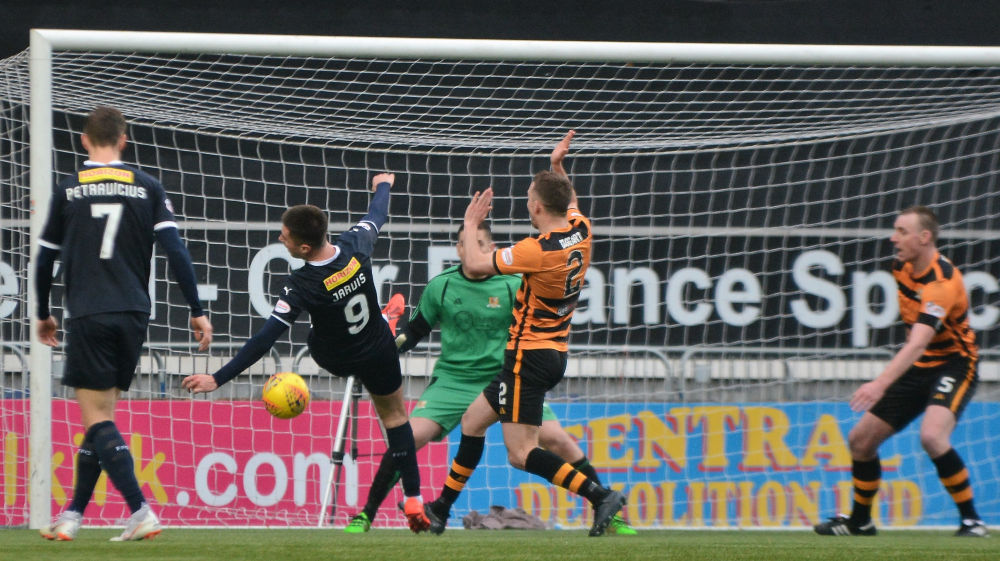 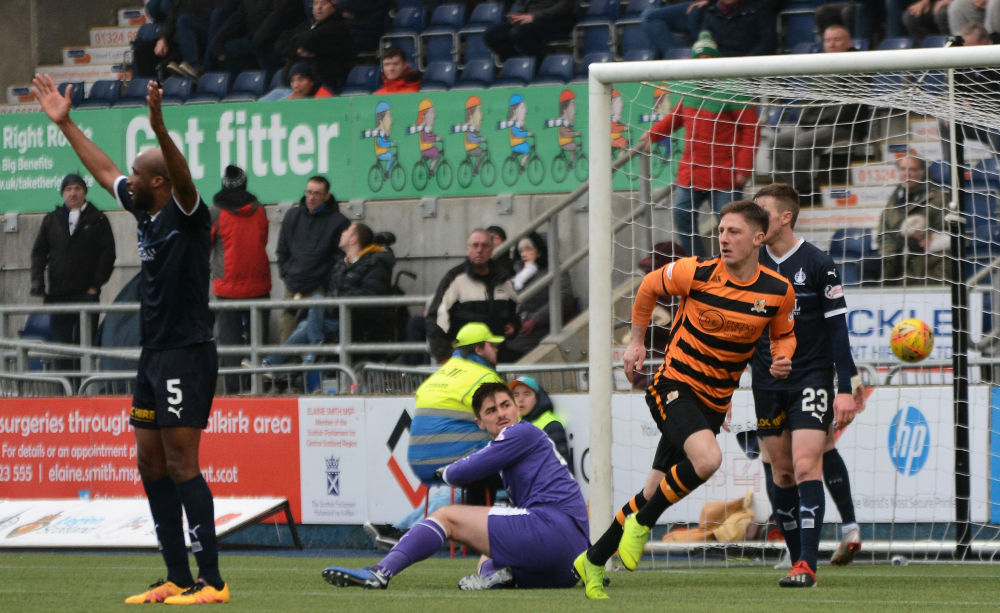 Victory for "The Wasps"

jim goodwin after victory at falkirk

We are an extremely happy bunch after that, it was  important we came here today and tried to follow up after the good performance last week, there was no point going and beating the best team in the league and then coming here and not being positive in our mindset.

We done that from the start of today’s game and with we deservedly got ourselves in front. Although after this we were disappointed to lose the goal just 25 seconds into the second half, we need to do better to avoid these opportunities arising for our opponents, but great testament to our players, at these points it is easy to crack under the pressure but we stood up and rode out the storm for the next five minutes and slowly but surely we got ourselves back into the game and went and got the late goal.

Winning games at this late stage of the season is vital particularly in the position that we are in. We believed that we could come here and win the game today and this is shown through the way we were set up today. We discussed it as a team during the week, that there was no point in coming here and being happy to take a point from the game, it’s not how we go about things  so we set the team up to win rather than not to lose and I think you would see that in the way we played today.

First half we did well on the ball in possession and I think we caused them a number of problems and probably just lacked a little cutting edge in the final third with our final ball letting us down at times. This is the time to go on a run and put pressure on the teams around us in the league which is great.

It is going to be a busy week this week with Morton on Tuesday night and Queen of the South on Saturday which could be seen as a defining week for us. We have great confidence and great faith in each other as a group, people can talk about budgets and being part-time and everything else but when you have the togetherness and team spirit which we have with both staff and players it can take you a long way. This can be seen again today when there were players who are disappointed not to be starting today but when they come on the pitch today they have made a great impact on the game. All substitutes, Jack Hamilton, Kevin Cawley and Jordan Kirkpatrick were involved in the goal with Jack winning the first flick on, then Kevin nods it down, then Jordan who having only just came onto the park had the composure to finish it for us. I was delighted for all three of these boys as they have been terrific in training they don’t feel sorry for themselves they respect the decisions which I have to make and when they are needed throughout a game they are ready as shown in today’s game. The substitutions which we made showed that we were here trying to win the game, we weren’t going to hang on for a point, it was vital that we came here to win the game and we did that.