It is unusal having been 2-0 down away from home against a full-time side that we might feel aggrieved only to pick up a point in a 2-2 draw. However, apart from “The Wasps” opening 30 minutes in this match they dominated play and deserved more than their sixth draw of the season. Alloa had not won a league match at Falkirk since 15th September, 1982, when they won 1-0 thanks to a Garry Murray goal, Alex Totten being the last Alloa manager to win at Falkirk in the league.

This was a missed opportunity to win at the Falkirk Stadium, Alan Trouten’s goal just prior to half-time was huge and gave the players the belief they could go on and win the match while the Falkirk team looked far more nervy and got deeper as the game went on.

In the second half Alloa dominated the play and always looked to get forward playing positive football and looked the team most likely to score.

It was that man Alan Trouten who would score the desrved equalising goal on 77 minutes, his 12th goal of the season, back heeling the ball past Leonardo Fasan in the Falkirk goal. 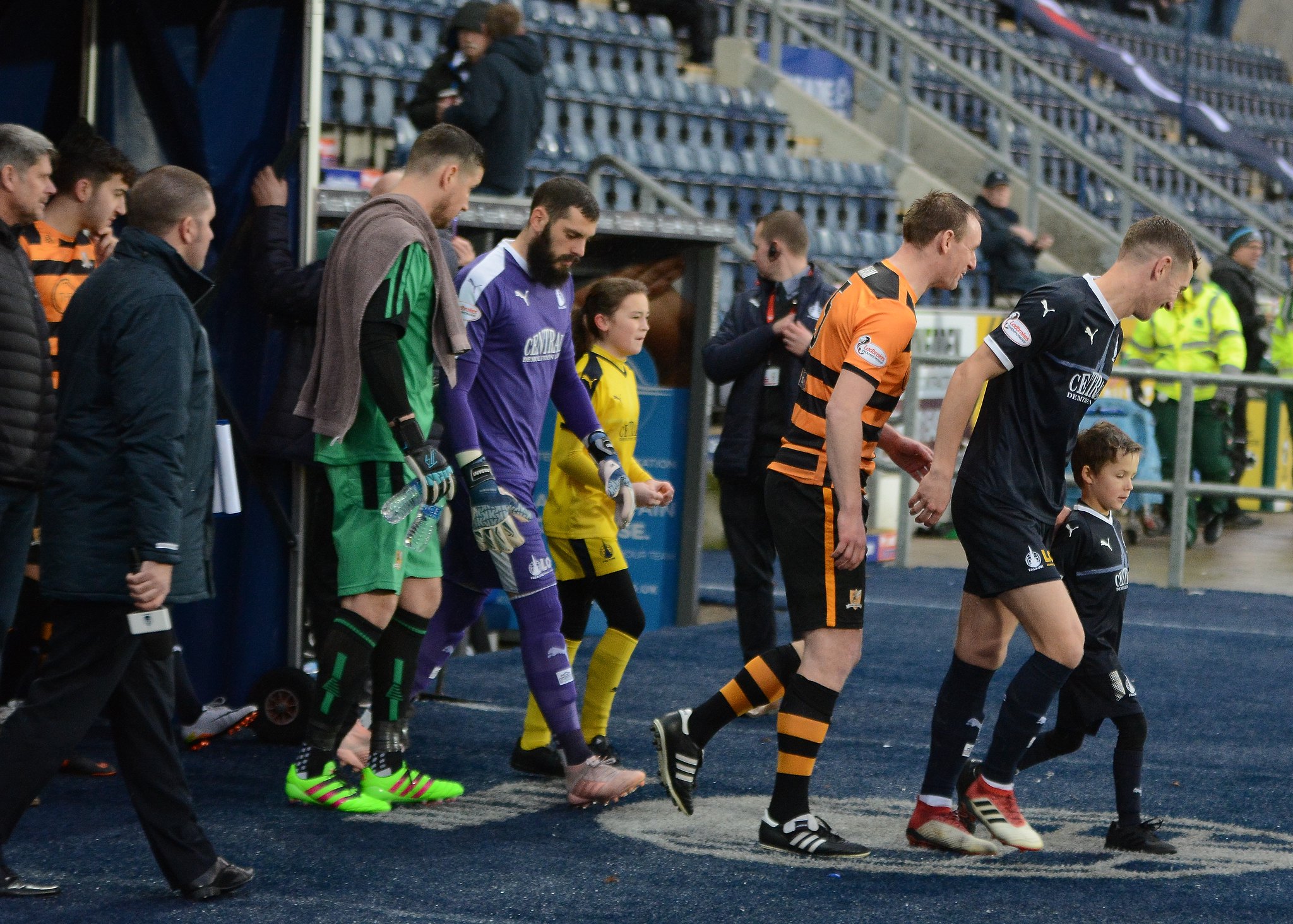 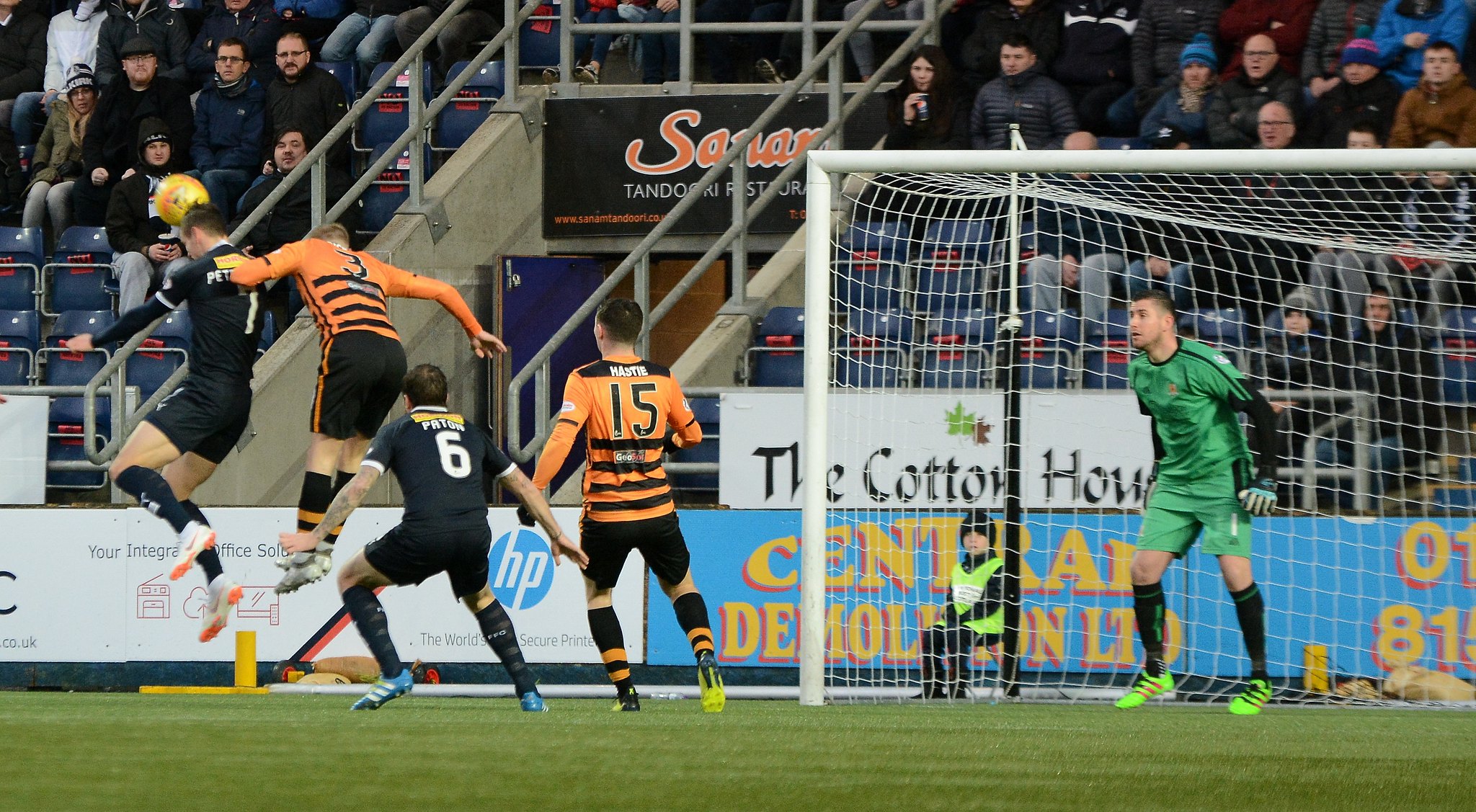 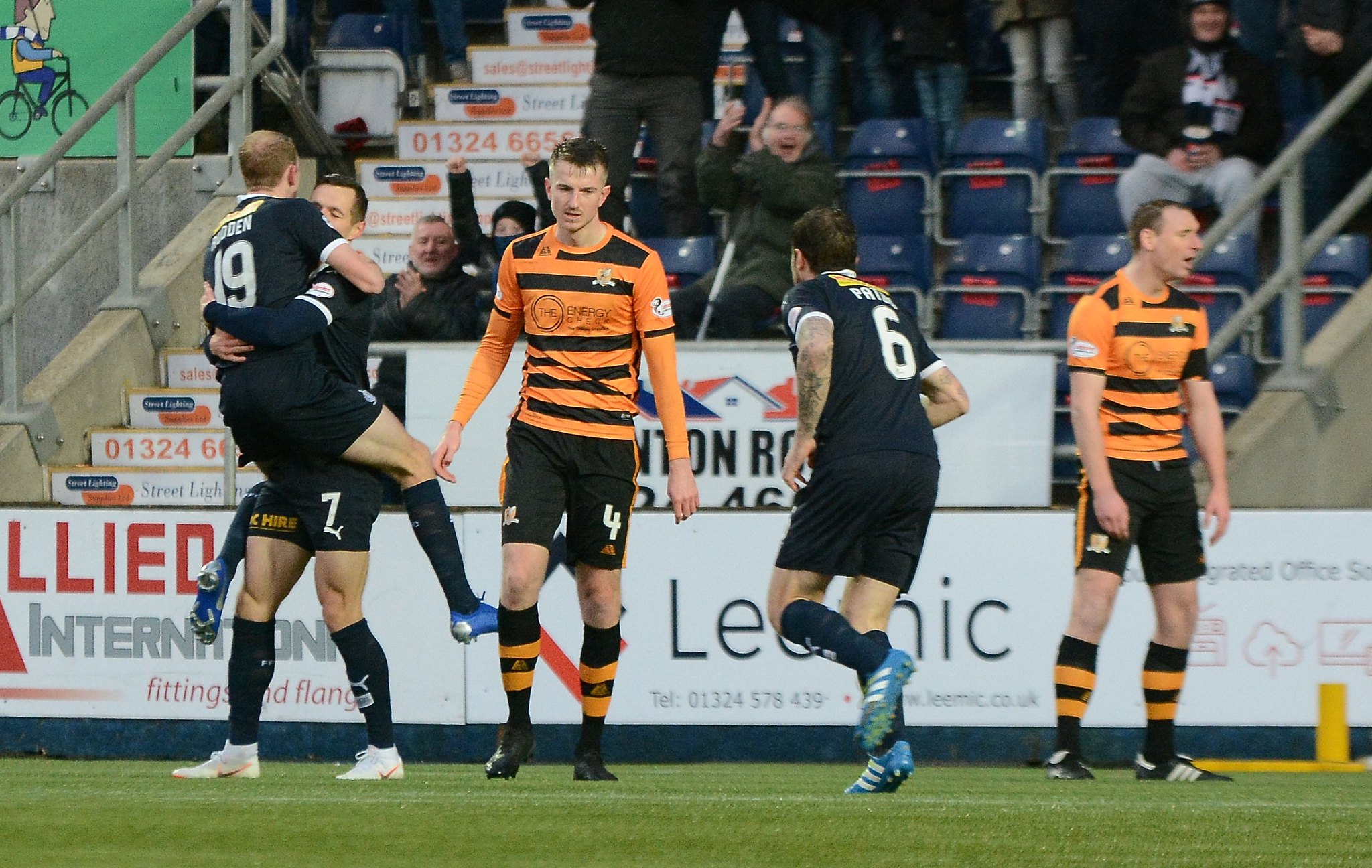 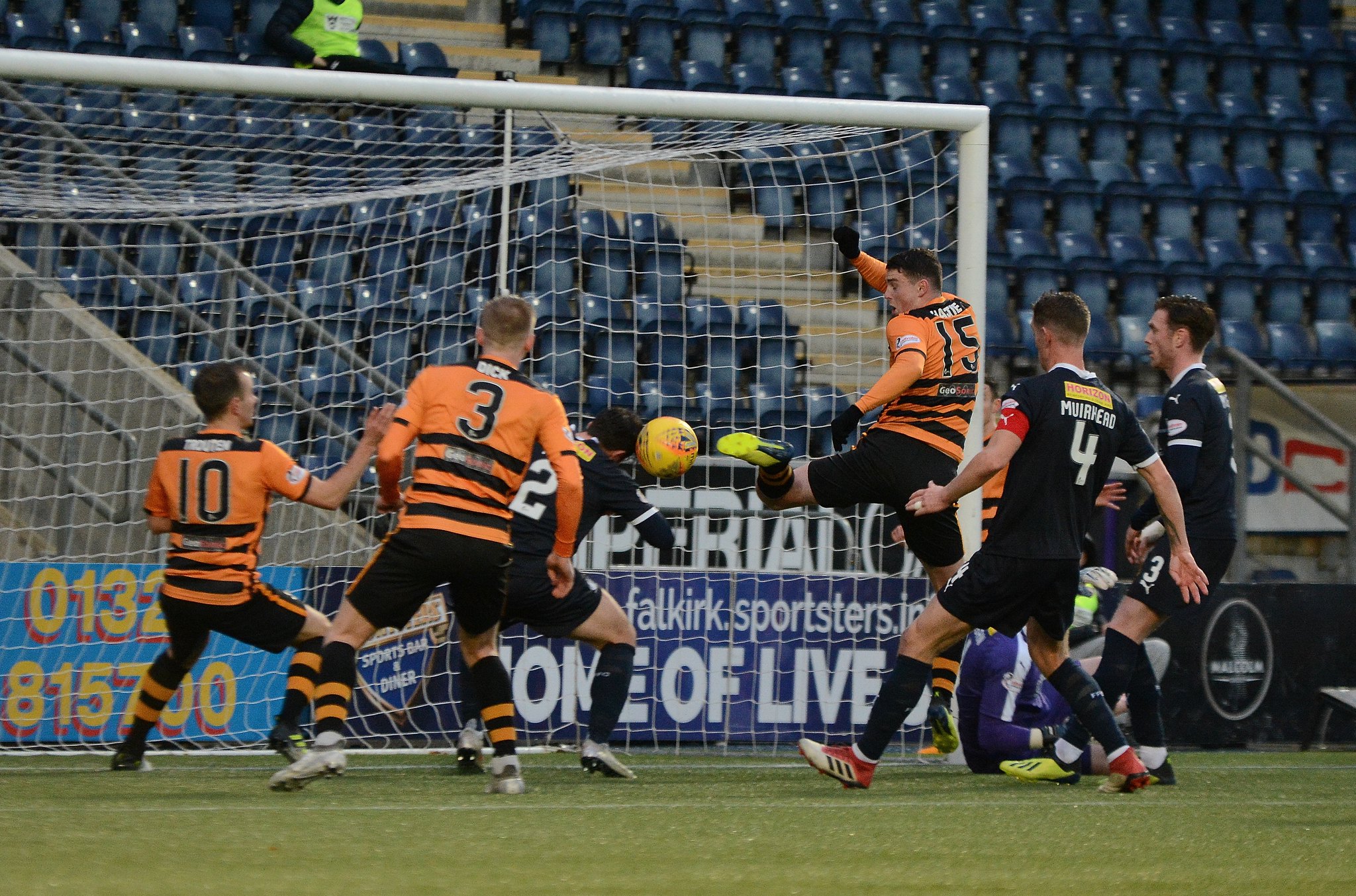 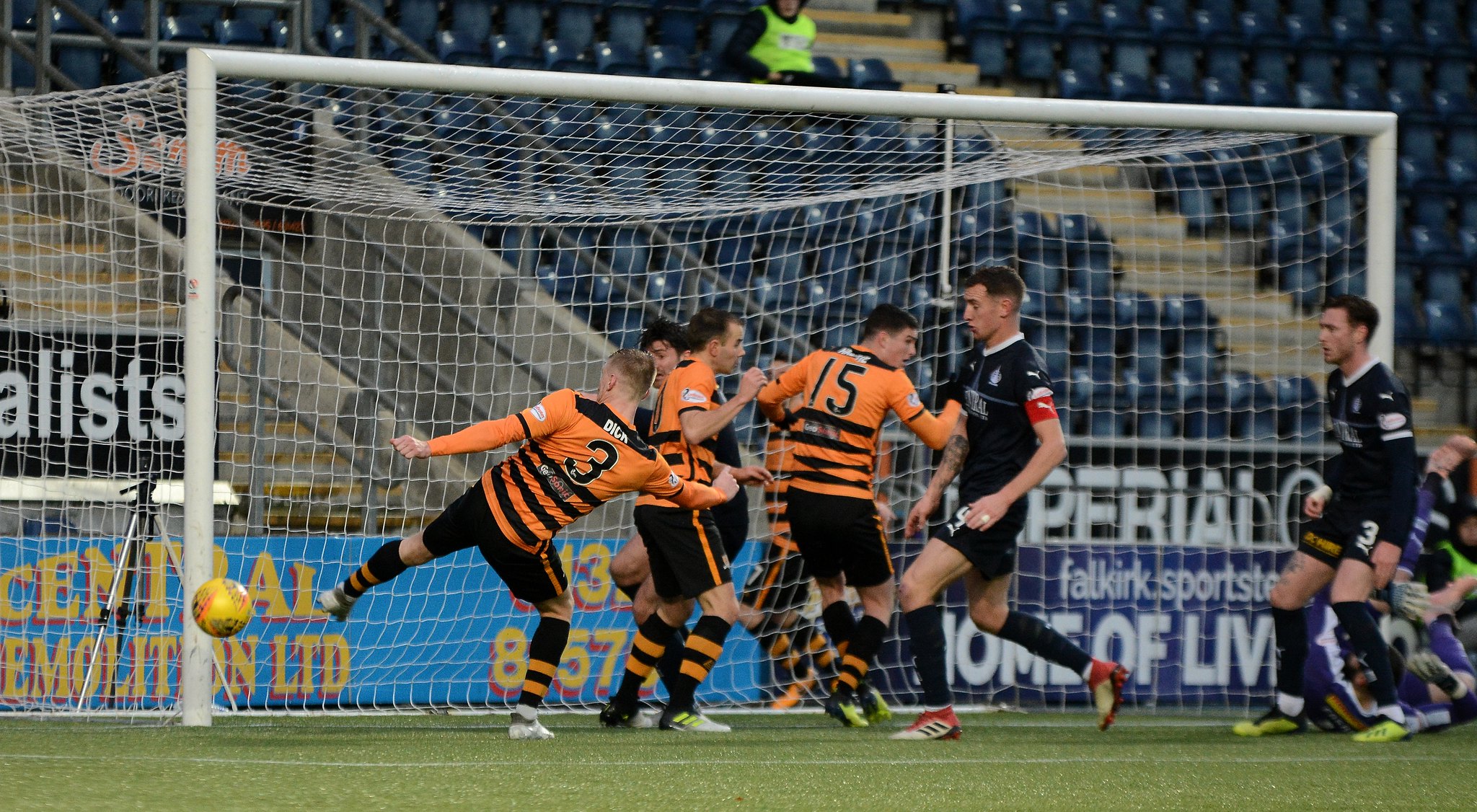 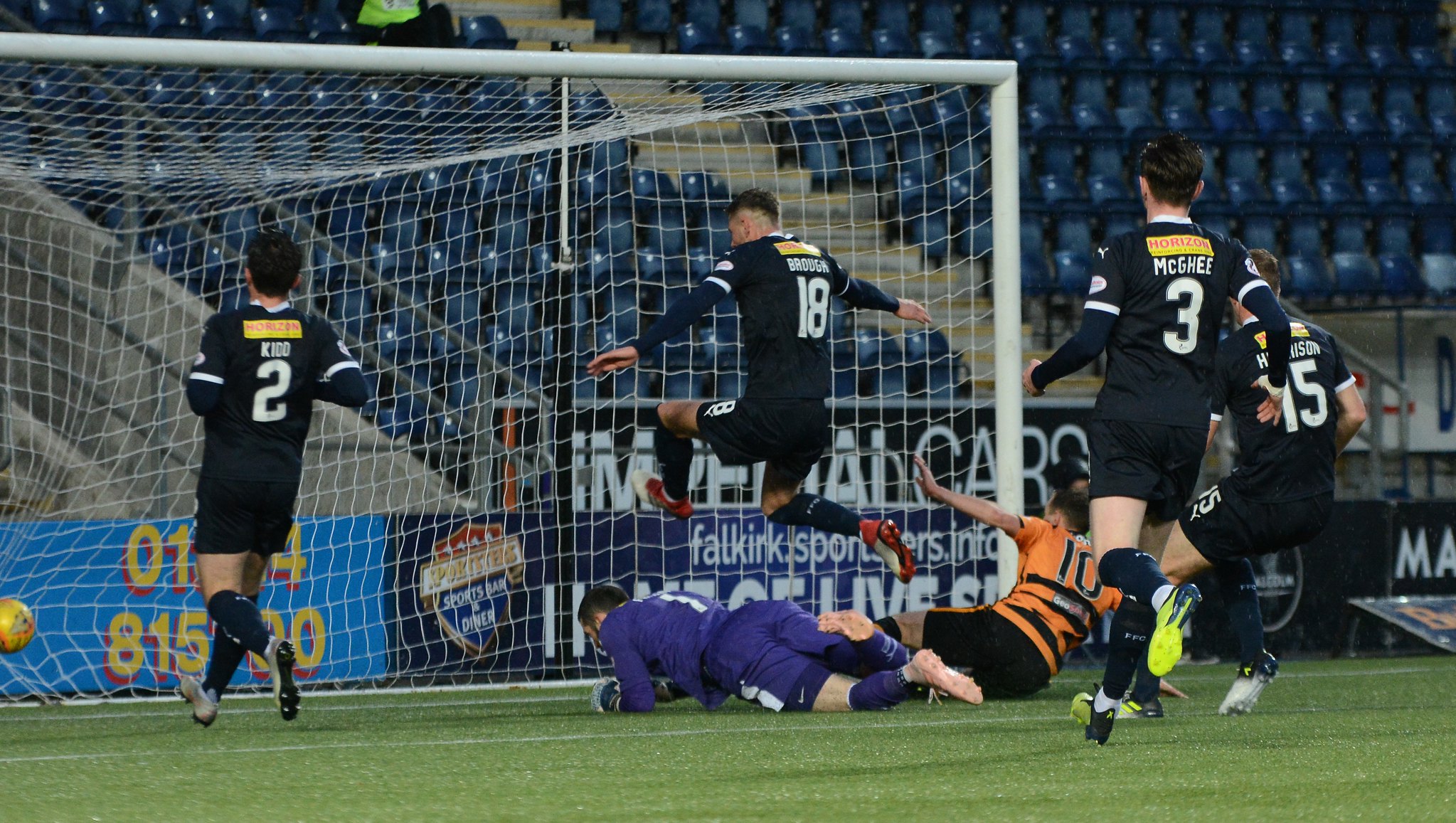 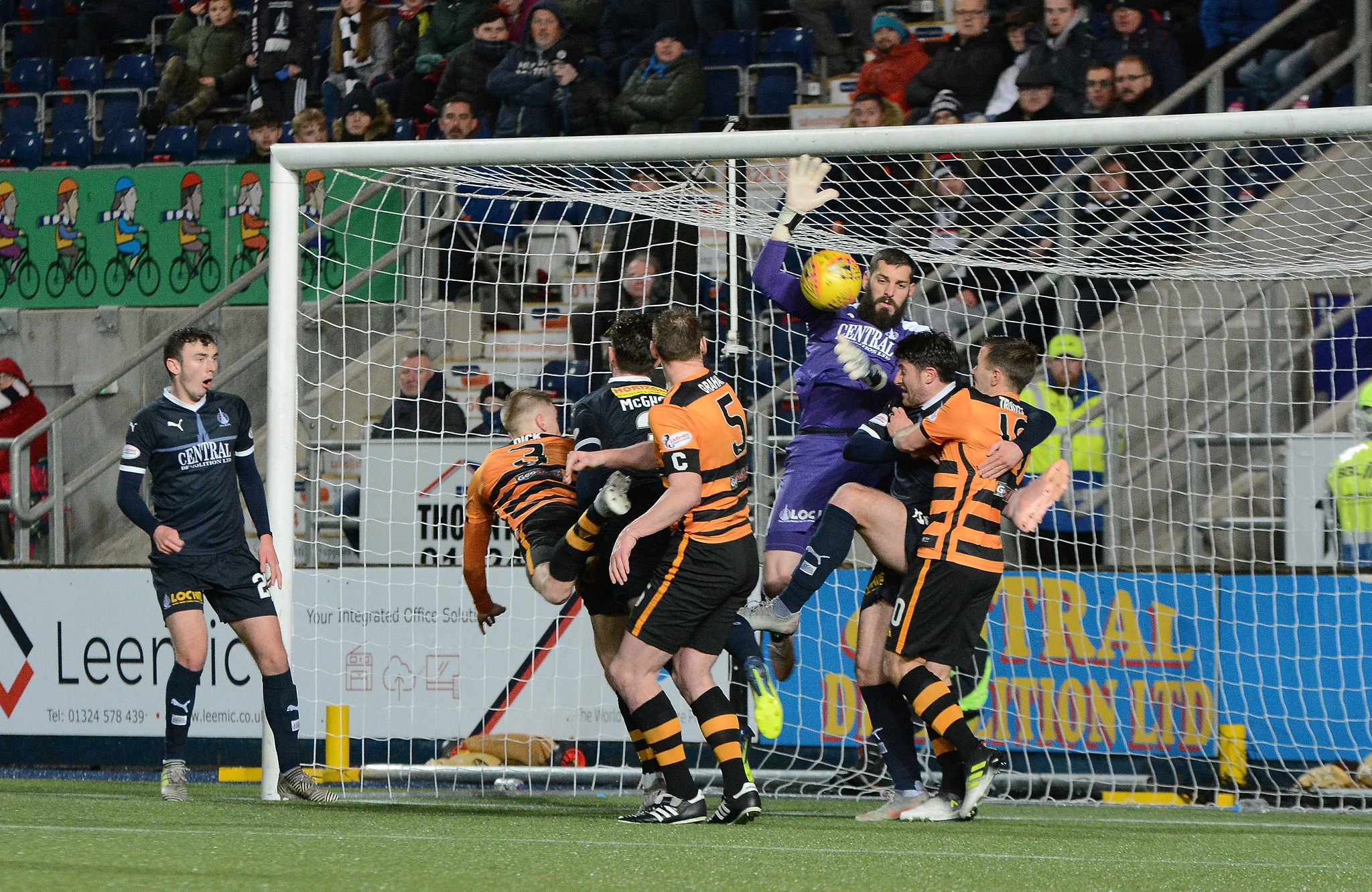 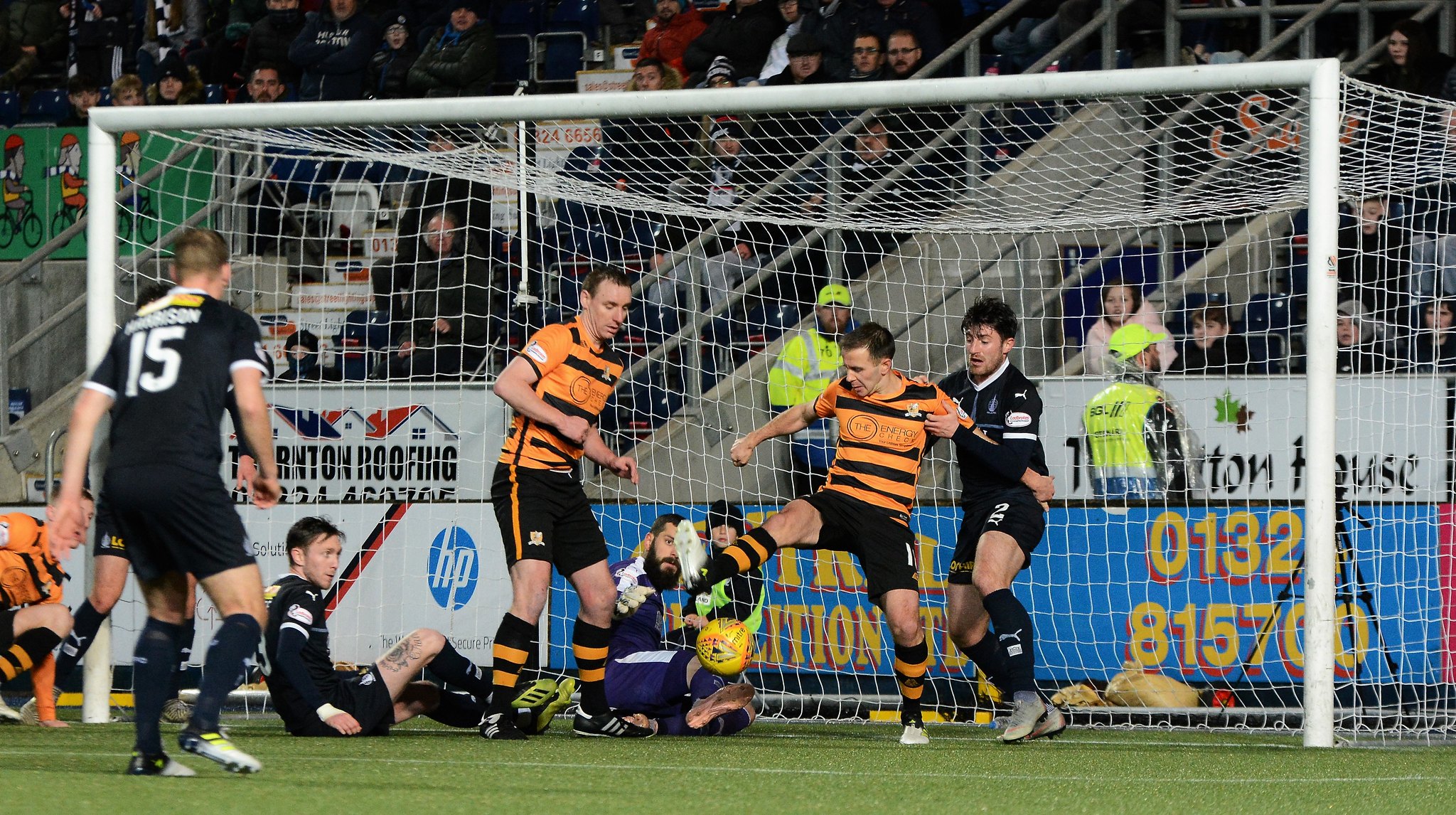 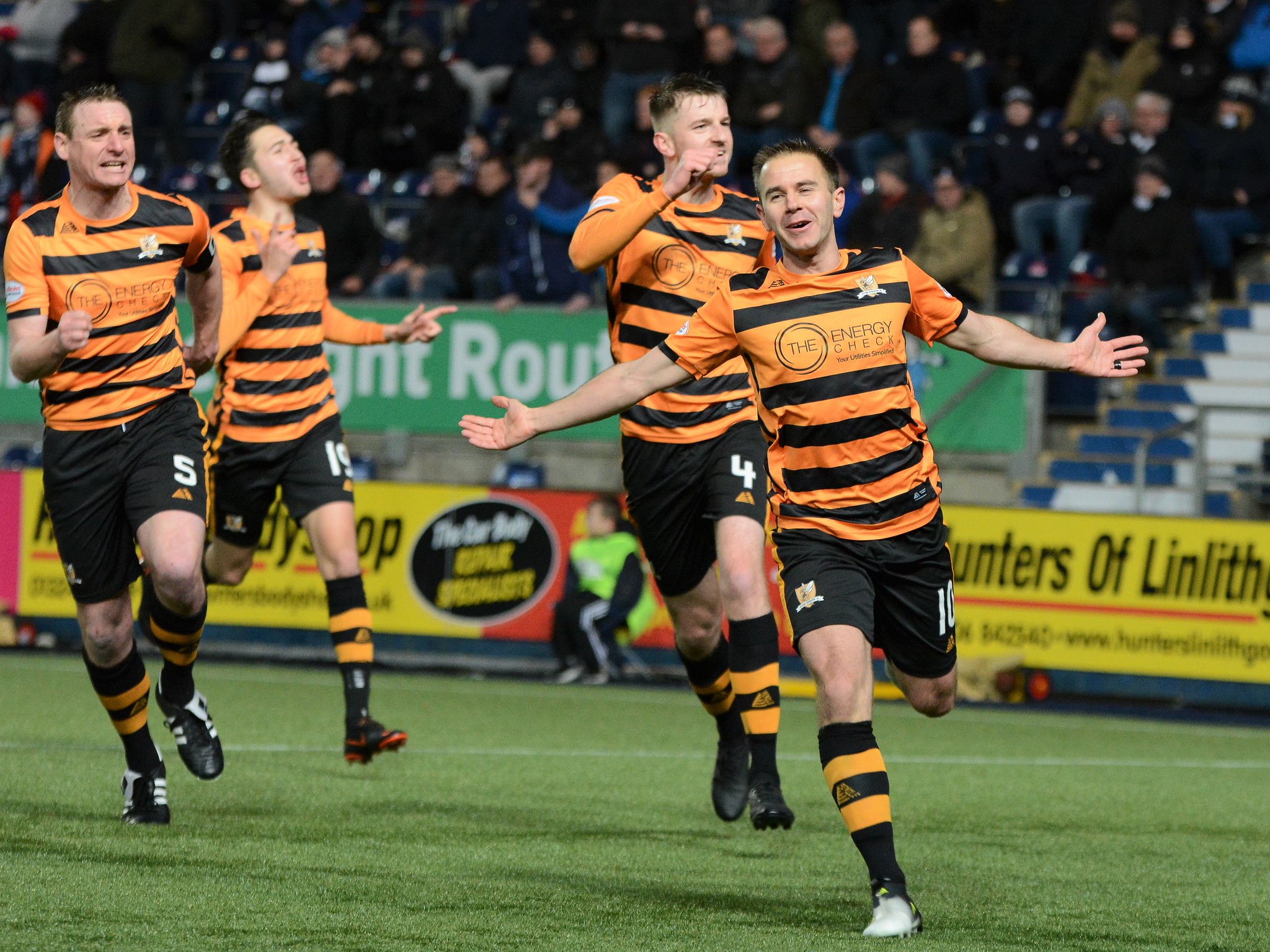 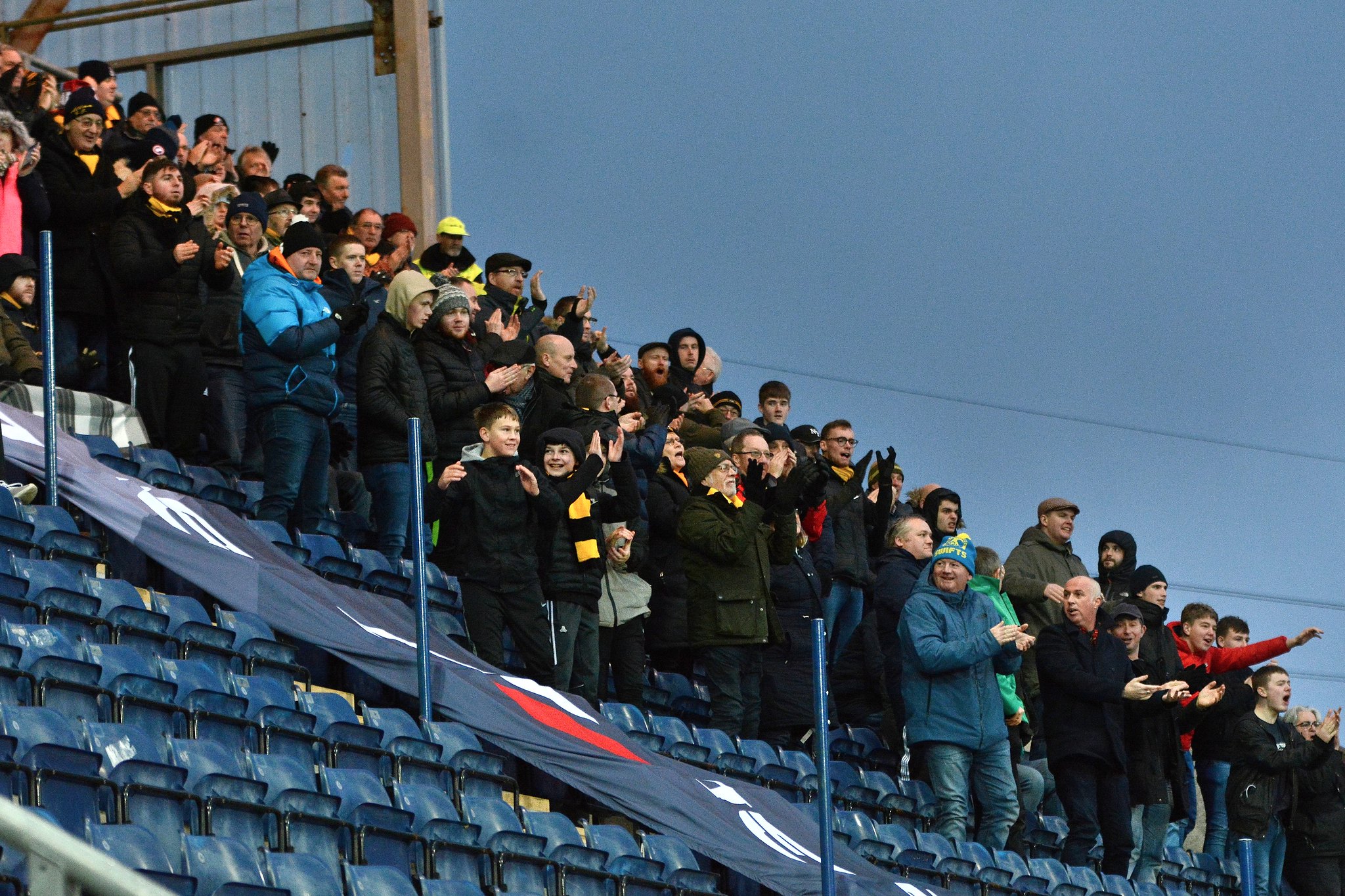 jim goodwin after draw at falkirk

I should be satisfied with our come back to gain a point after being two goals down but it is probably the most deflated I have felt after a game of football for a long time to be honest with you. I am really frustrated that we gifted Falkirk a two goal start, both sloppy goals as far as we are concerned. We needed to defend the first one better and stop the cross and be stronger with their striker in the box. The second one is one of the things we talked about at training on Thursday evening, Falkirk are a very direct football team and we knew they would want to put balls in behind us and we gave them too much space to do that and then Paul Paton gets a tap in, but after that we completely dominated the game, I thought we were well on top but the game is not all about possession stats it is goals that matter, but we completely controlled the game from there on and got a good goal just before half-time which was an important time to score.

Then in the second half I just felt we were camped in the Falkirk half for the majority of the game, the fact that I am sitting here now disappointed with a 2-2 draw speaks volumes. We have the kind of team I wanted to put together in the summer, I spoke to the boys when we were doing our recruitment and I was not willing to bring in guys who can’t handle the ball and not being wanting to play. We have a certain philosophy and I want to stick to it, I know it is a results business at the end of the day, some managers will grind out results but I do not want us to do it that way, I want to get good footballers in my team who can handle the ball and I would be really interested to see the stats today, we absolutely dominated the ball in terms of possession, I know it is what you do with it, I understand that and we can improve on that aspect we know we need to do more with the ball but I believe it would have been a travesty if we hadn’t come away with something from the game today.

I still think it is a massive point and how important it is going to be, who knows? I’m just frustrated at the cheap goals we are giving away, if we can cut out those cheap goals then we can give ourselves a chance to win a game, I always fancy us going forward, we will create chances like we have done today, Dario Zanatta’s shot that hit the post in the second half and we had other opportunities balls flashing across the face of the goal as Kevin Cawley did in the first half but someone has got to go and knock them in.

We are dropping a lot of cheap points and today we fancied ourselves coming here today, we thought if we defended well we would give ourselves a chance to win the game, but you cannot give any team a two goal start. Loads of positives to take from the afternoon and we will go to Firhill next week, not fearing no one. We now need to get another win on the board we have picked up far too many draws, wins are vital and hopefully we can achieve that next Saturday against Partick Thistle.