The Wasps bounced back in the best possible way ay Gayfield, winning their first game at the ground since October, 2004. Manager Paul Hartley made four changes from the weekend and was able to give a debut to former Hearts striker, Calum Elliot, who had spent the last 12 months playing for Lithuanian cup winners Zalgiris Vilnius where he scored 17 goals in 39 appearances. The Wasps started the more positive team and went ahead after 19 minutes after Ryan McCord had been fouled in the box, he slotted the penalty home for his eigth goal of the season. Ex Alloa centre half Stuart Malcolm equalised, heading home a corner just after the hour mark, but back came Alloa and it was substitute Kevin Cawley who scored the important winning goal two minutes from the end which was no more than “The Wasps” deserved. 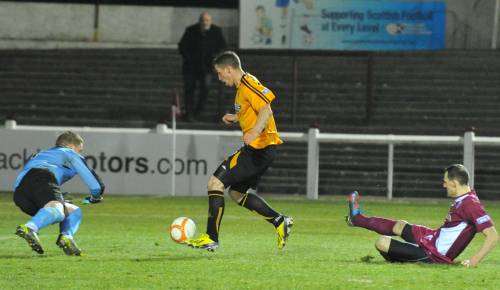 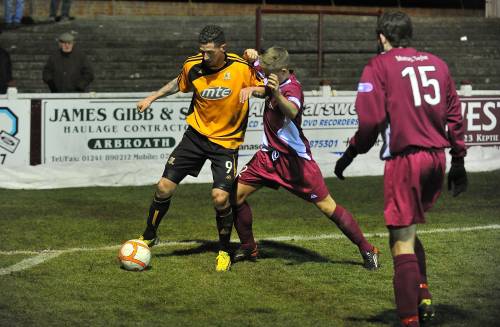 I thought we were terrific and played really well. For the first half hour we were excellent. They came into it a wee bit and got their goal at the start of the second half but other than that they never really threatened us. But I thought our overall play was absolutely terrific. Some of the football in the second half was great and we created a lot of chances. Maybe we need to start taking more of our chances, but I tell you what, that is a great response after Saturday’s defeat. That shows you the character we have in that dressing room. It is an important win for us because Arbroath are a difficult team to beat at home. Not many teams come here and win but we were well worthy of the points. Some of our football at times was excellent with the likes of Ryan McCord back on his game, Calum Elliot giving us that presence up front along with Martin Grehan. The players were great and their work rate was first class. Calum Elliot was great and he could’ve maybe scored but he has real presence, He is clever and he links the play well. So it was a good debut for him and he can only get better. I think the winner was Kevin’s goal and Calum is unlucky not to get a touch on it but it doesn’t matter who scored it as long as the ball goes in the net that’s all we are worried about. Looking at Brechin City, the gap is now ten points again and we would much rather have the points on the board at this stage of the season. We know they have games in hand but they have to win them, but I am only concerned what Alloa Athletic do and my players and how good they were tonight. We have another tough game against Albion Rovers on Saturday, so we will rest up and be ready to go again. Meggatt being back was a huge factor for us, I thought he was excellent and played really well for us, it was a great response after Saturday.