“The Wasps” ended Forfar Athletic’s six game unbeaten record in a five goal thriller at Station Park in a game which was a credit to open attacking football. Both teams were direct and looked to get the ball down and play on Forfar’s new 3G pitch which will be officially opened next Monday in a match against Aberdeen.

Although Alloa opened the scoring in the 7th minute, they could have been two down in the opening minutes such was the pace of this game, Scott Bain making two outstanding saves to keep “The Loons” out. The opening goal came when a ball was played through to Thomson who looked to go round Souter but was hauled down, penalty, but no further action against the keeper. Ryan McCord slotted home the penalty, his first goal of the season, in a game he looked but to his best.

As happens in many football games, an equalising goal came swiftly in the next minute scored by Danny Denhlom. Mitch Megginson on his debut was trying to run at the Forfar defence with Thomson a tireless back up. In 21 minutes Jason Marr scored his first goal for the club rising to head home Docherty’s cross ball. In the second half Forfar had a lot of possession but the Alloa defence looked resolute until Danny Denholm scored his 2nd goal of the day with about ten minutes left. Neither manager looked to settle for a draw and Ben Gordon headed home another set piece to put “The Wasps” back in front in a game which  was a great advert for Scottish football, Forfar again went close with a shot which struck the crossbar and came down on the line and even later Graeme Holmes and Kevin Cawley had great chances to increase “The Wasps” margin in victory. 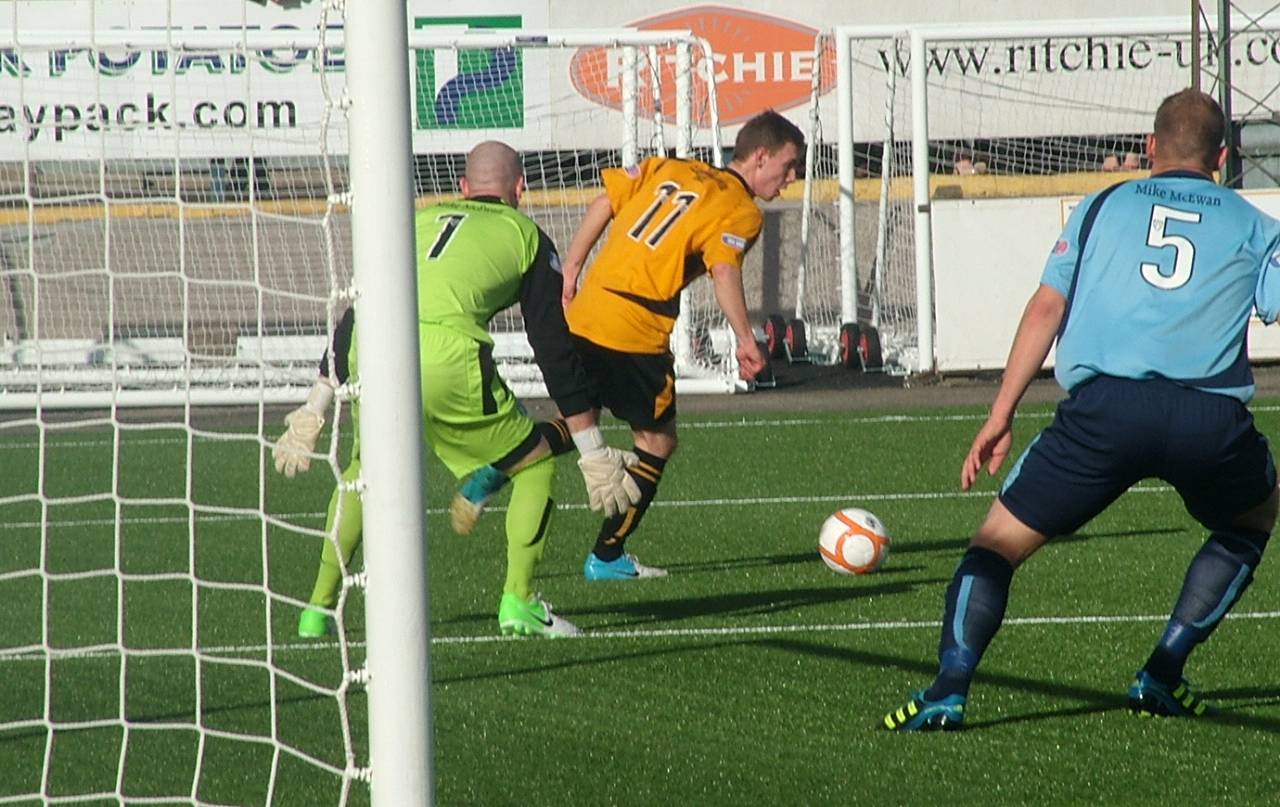 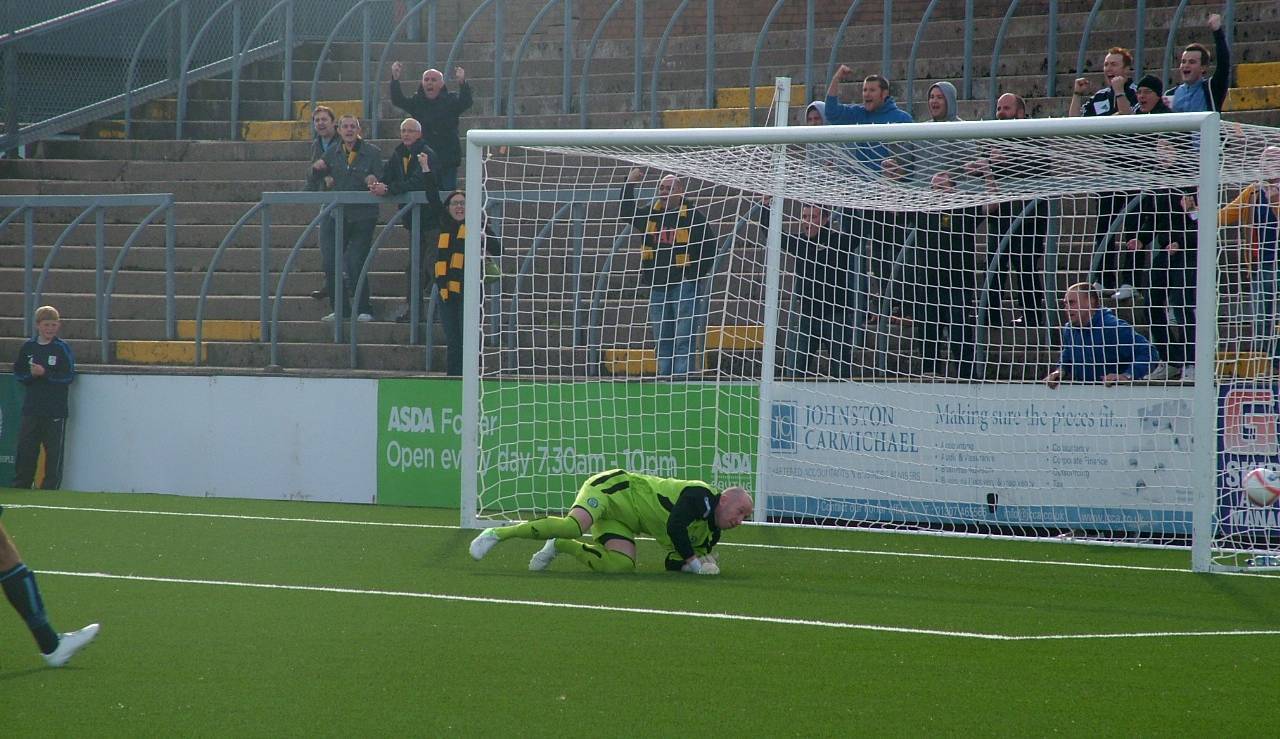 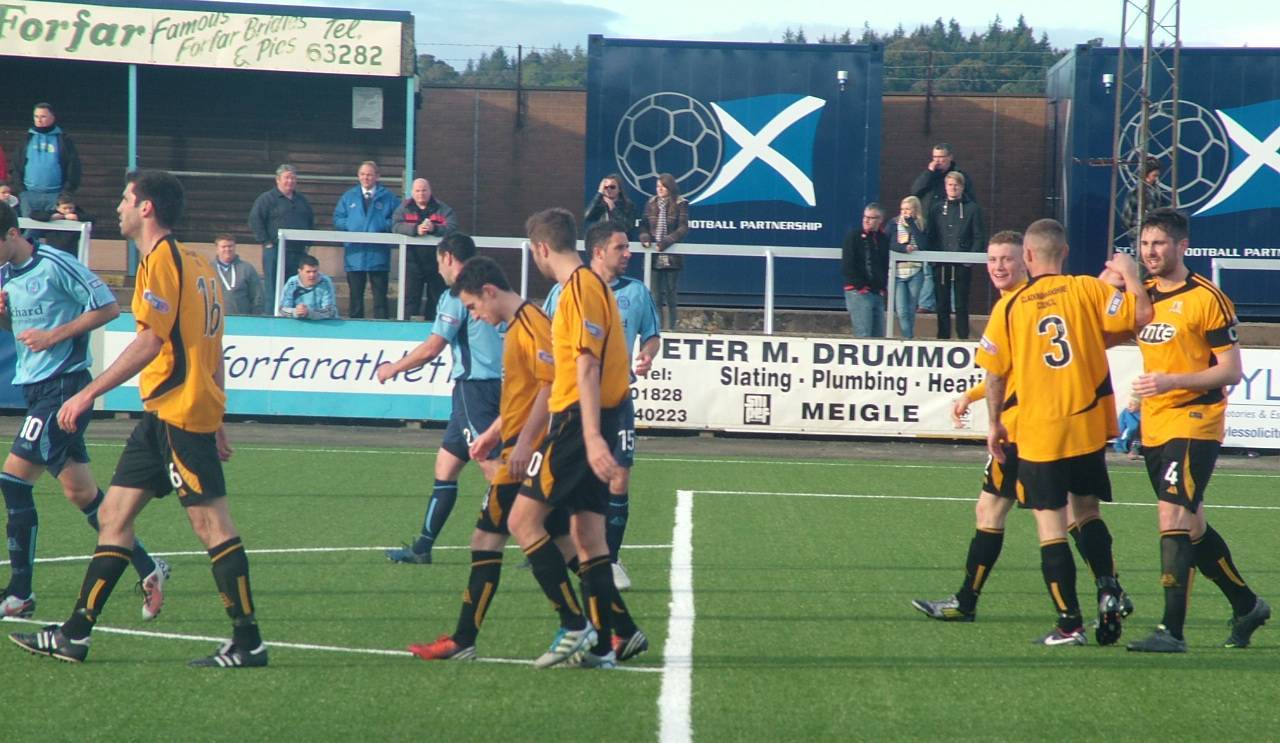 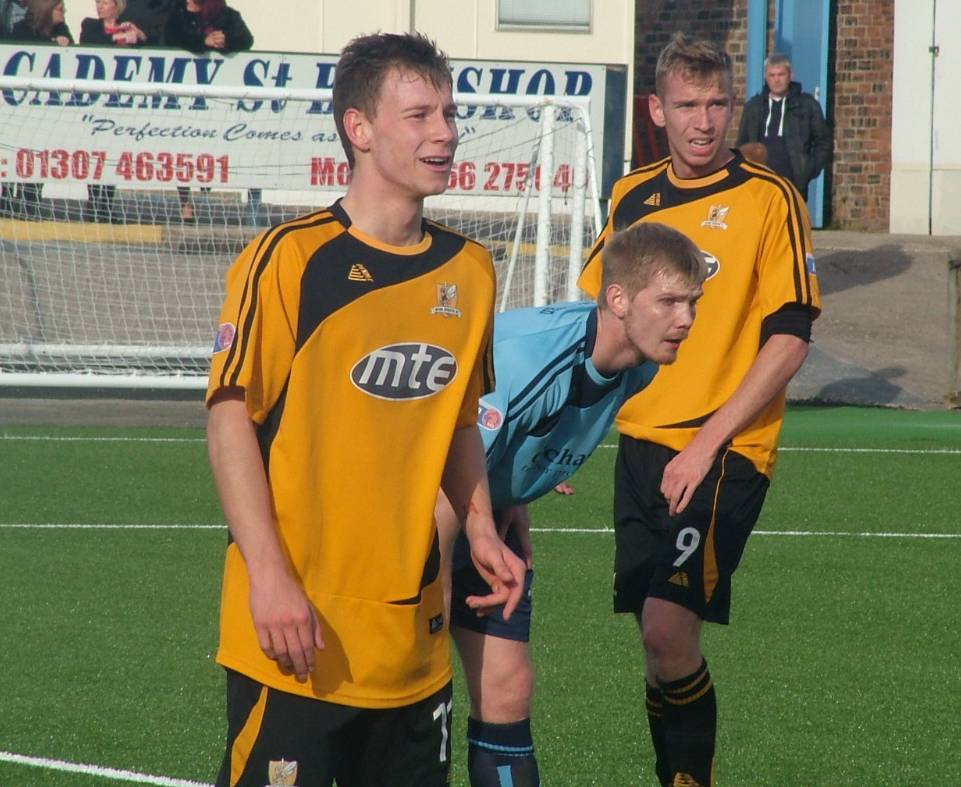 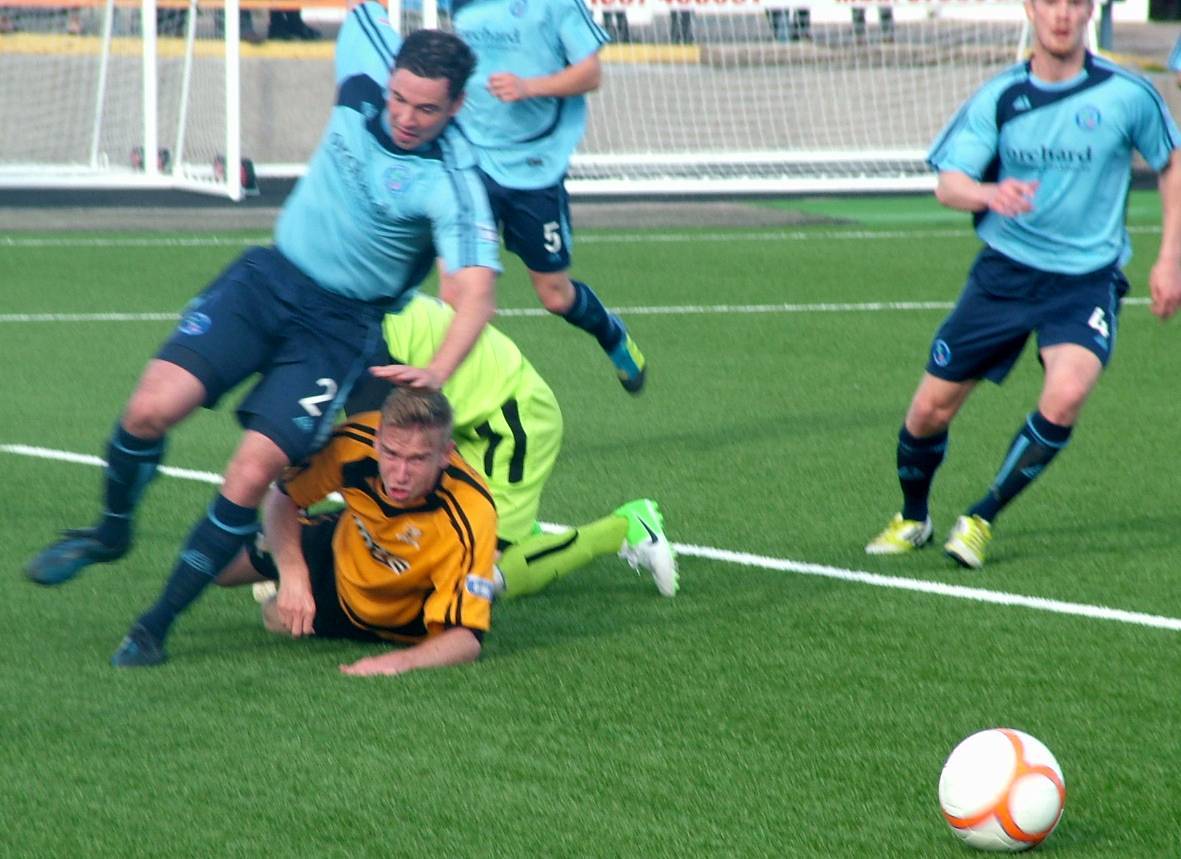 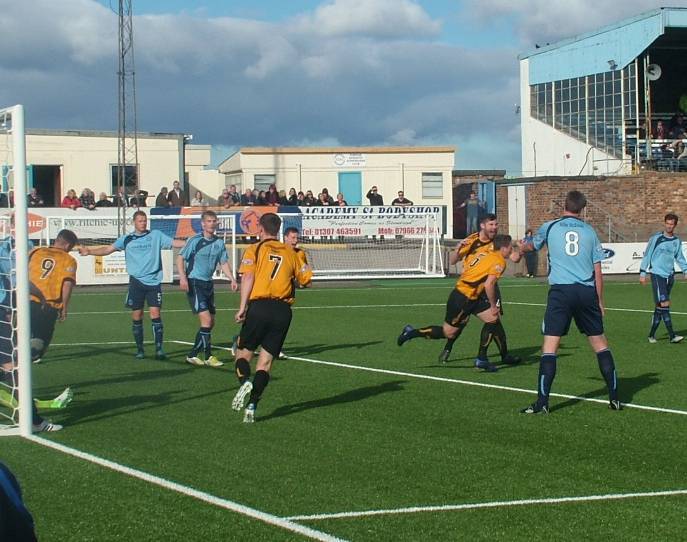 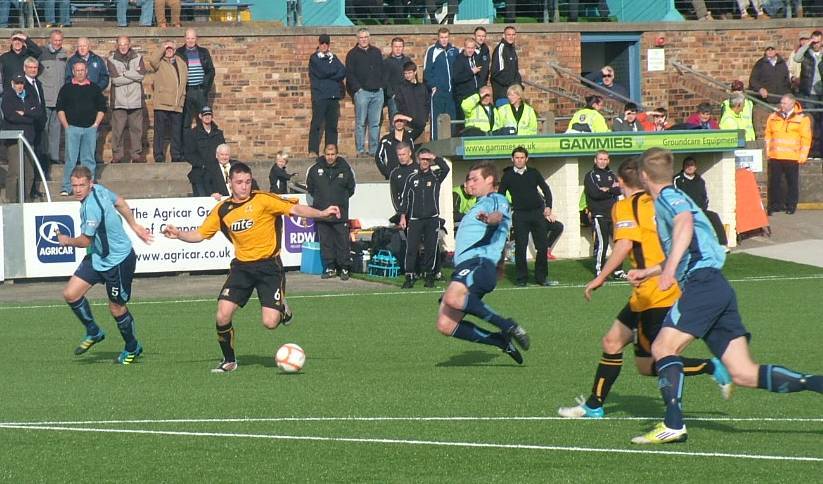 paul hartley after win at forfar

I thought in the first half we played well – in the second half we knew that they would come at us and they put a lot of high balls into our defence but we coped okay with it – disappointed that we didn’t get back in, great resilience and great desire not to get beaten we were trying to win the game it was good the two centre halves scored, this was due to good deliveries into the box at set pieces – a great three points I think it is important especially going into the break that you like to win. A great three points it is not an easy place to come to, they have been flying high so we are delighted to get the victory. Two goals from corners was pleasing, as I said It is all about the delivery and the movement and hopefully the ball goes in – it is not rocket science, I didn’t introduce anything different I just told them to try and get good delivery into the box, go and attack it see if you can get your head on it, have a bit of desire and we did. I am pleased with the three points. I was pleases with the first half the way we played , we knocked the ball about well and we looked as we could score every time we went up the park , having said that Scott Bain had two brilliant saves right at the start of the match and on another day it could have started differently, but that is what he is there for, we know he is a fantastic young goalkeeper , still learned but has a great future ahead of him. Mitch Megginson came in for his debut and had a fantastic start, he tired in the second half due to the fact he has not played competitive football for a wee bit but he was a bright and sharp up front with “Tommo” and we had great attacking options on the bench, I wanted a victory today and was positive in my team selection.