The Wasps” reached their fifth Play-Off final on Saturday at Stark’s Park after being the only team to defeat Raith Rovers in the league this season. Nobody could deny “The Wasps” were the better team over the two legs, winning 4-1 on aggregate. Having recorded a 2-0 victory earlier in the week at The Indodrill Stadium in the first leg, a scoreline which many on the evening believed could have been extended and the visitors were let off lightly.

Raith Rovers started the second game at Starks Park on the front foot looking for an early goal to give them a lifeline but the Alloa defence stood solid. Indeed the breakthrough came at the other end which silenced the home support. Raith Rovers captain Kyle Benedictus holding back Ross Stewart to give away the free kick, which Jordan Kirkpatrick executed with great style.

It was a brilliant free kick from Jordan Kirkpatrick, who the previous Saturday at the other end of the ground was only denied by a finger tip save by Graeme Smith.

Within seven minutes of the second half, Raith Rovers finally managed to get the ball past Neil Parry in the Alloa goal and they were desperate to try and get a second to the extent four of the Rovers players tried to wrestle the ball quickly from Neil Parry which resulted in a the referee issuing 3 yellow cards.

With time running out and still losing 3-1 on aggregate, Ross Stewart, who had ran himself into the ground scored the killer 4th goal to end Barry Smith’s side chance to “Roar Back”. 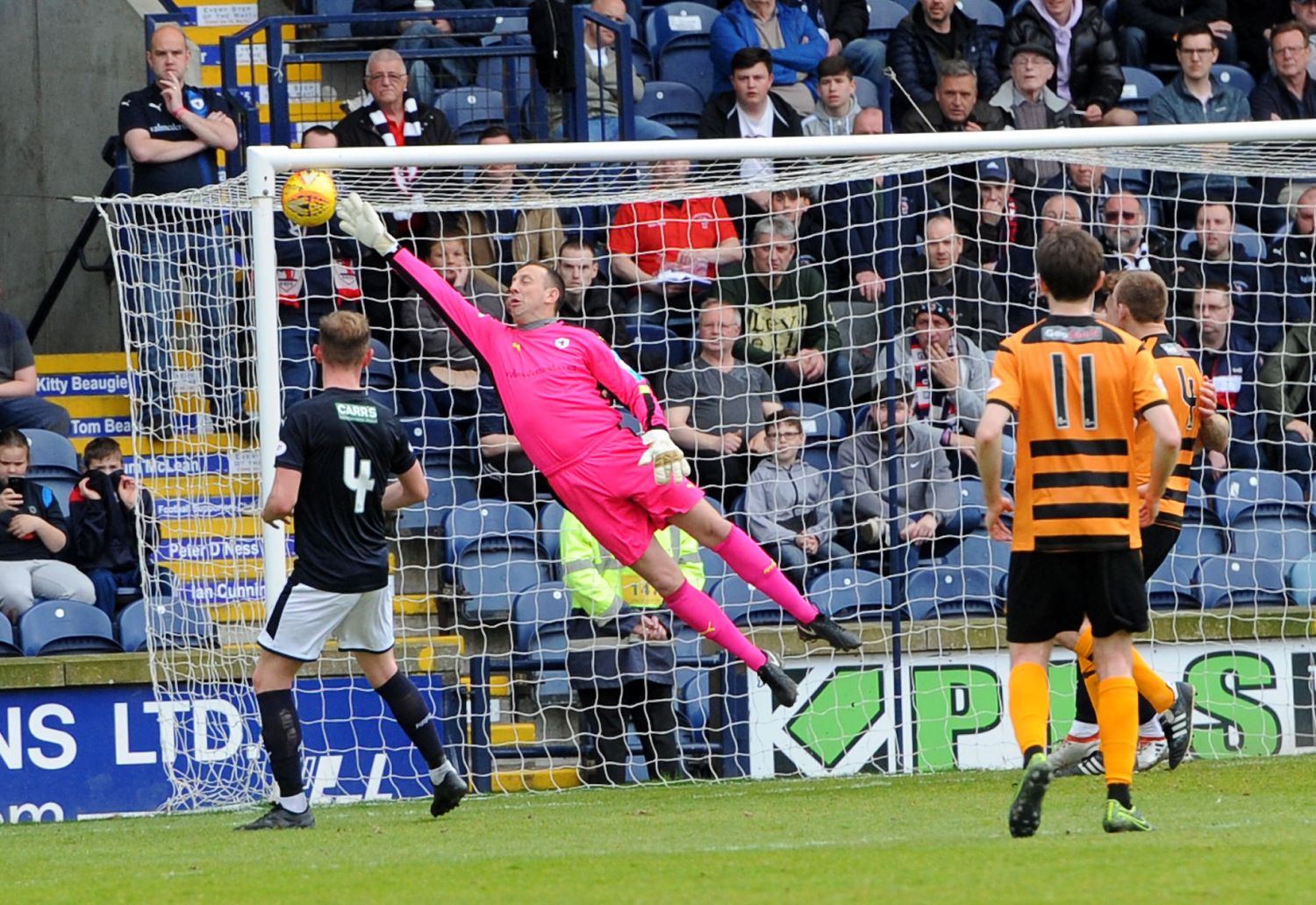 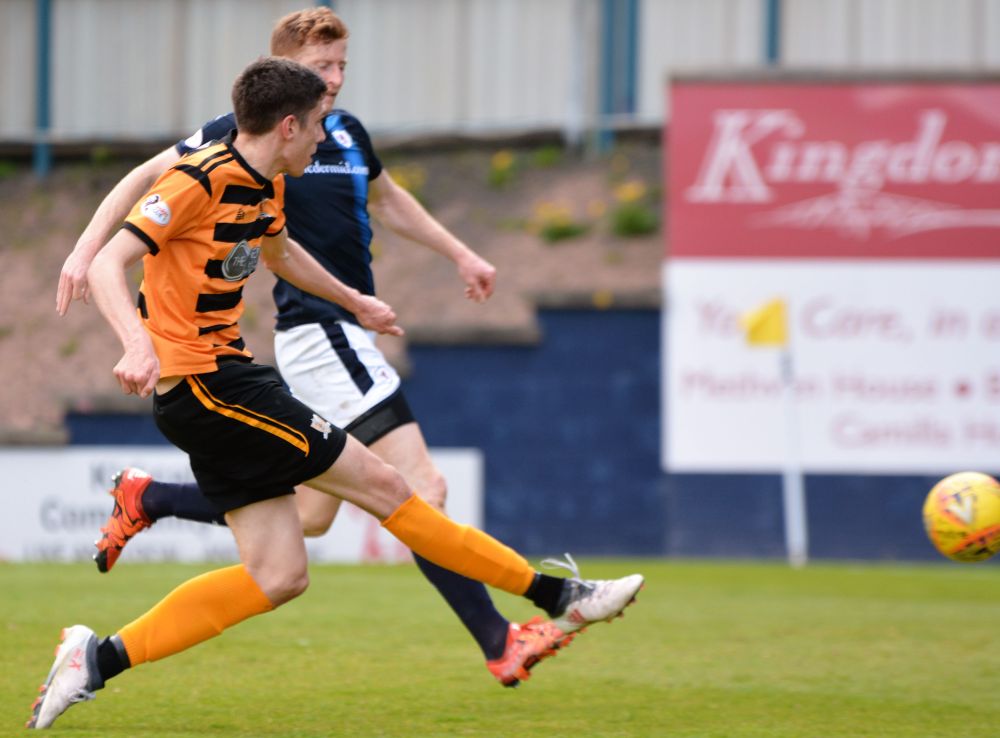 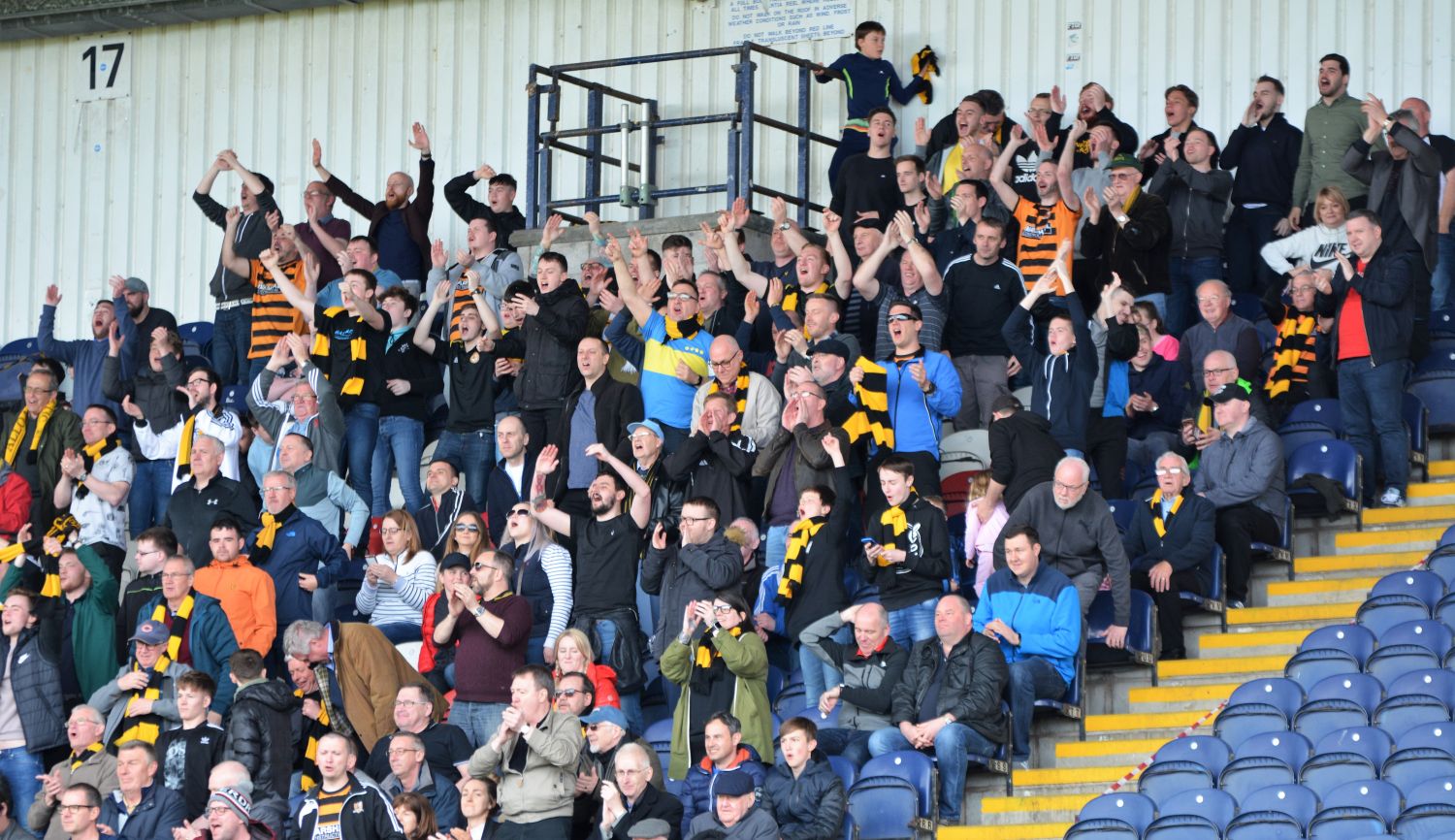 Delighted with our overall performance in both legs of the Semi-Final Tie, we were the better team over the two legs; I don’t think anybody would disagree with that or the end result. Raith Rovers are a fantastic team and came so close to winning the League title, so we knew we would have to be at our best, but the players stood up to everything, to a man, right from the strikers back to the goalkeeper, they were outstanding, even the substitutes when they came on contributed and made an impact doing what you ask them to do and I thought we managed the games particularly well at times, particularly after conceding an early goal in the second half there was still plenty time on the clock from a Raith Rovers point of view to get another goal, we had to stand up to that and I just thought it was a great performance. We knew Raith Rovers would throw everything at us in the second half, we discussed it at half-time and we would look to pick our right moments to counter attack and get at them and I thought we did that really well. Obviously the last goal killed them off and we could all breathe an awful lot easier after that.

It was a brilliant free-kick from Jordan Kirkpatrick only a week ago at the other end of the ground when their goalkeeper made a wonderful save but “Kirky” tried his luck again today and I don’t think he could have hit it any sweeter, however the kick-off after it was interesting, but the goal was a great moment in the game. There have been some very good individual performances from the lads but collectively as a unit they have been excellent, to be the only team to have come here all season and get a win it speaks volumes of what we put into it.

Ross ran himself into the ground and it was fitting he got his reward with the winning goal, he has been outstanding since he came and joined us on loan, he is probably up there with the best strikers in the league there is no doubting about that, personally I believe he can move on to the next level, I think St. Mirren are lucky to have him, there is still a bit of developing to do for the big man but he has so many good attributes, he has been excellent for us as have a number of the other players as well. We have a number of our boys who have been named in the PFA Team of the Year which speaks volumes of what their piers think of them as well.

Delighted but we now have another difficult game to look forward to next week so it is important we recover properly do the right things and get rid of all the knocks and bumps that we have picked up over the last couple of legs and make sure we are right to go again on Wednesday. I think Steve Aitken is one of the most under rated managers in Scotland, for the job that he has done with Dumbarton, to keep them in that league for the number of years he has is incredible. I think Brechin City showed how difficult it is when you go up to the Championship as a part time club, so I have the greatest respect for Steve Aitken and we know they are a very well organised difficult team to break down, I have watched them a couple of times live towards the end of the season and I have footage of them I have also been watching in preparation of next week, so we have done our homework we know what we have to do but I have said it before and I will say it again “ We don’t fear anybody” and I really didn’t care who we got be it Arbroath, Raith or Dumbarton, I know if our boys reach the level as they are capable of they are capable of beating any of these teams. To do that we have to defend as well as we have done up till now and we have players in the forward areas who can hurt anyone, we are really looking forward to it, we go with no apprehension what so ever and look forward to the game.

Our support was great today, we are always grateful to our supporters, we are a small club but they can make a big difference and I thought they were excellent today, I would also like to say thank you to the Raith Rovers fans who stuck around after the game as well, I thought that was a nice touch and a class act from them as well, I have never seen that before the players certainly appreciated it but I think that speaks volumes how much they appreciated what we had done against difficult full time opposition not just how we managed to grind out the result but the way we tried to play the game overall over the two legs, let’s just hope we can now go and get the job done next week.