This was a game we were in touching distance of achieving our goal in getting into the next round of the William Hill Scottish Cup but any game at 2-0 it is a dangerous scoreline with the next goal so important and on this ocassion a costly error was to let St. Mirren back into a match most people in the Stadium had thought beyond them. We had competed well and looked to have one foot in the next round until the mistake.

St. Mirren came closest to scoring first when Brad Lyons who was making his debut headed against the crossbar. however it was that man Alan Trouten who opened the scoring his 16th goal of the season and 4th in last three matches. Three minutes later things got worse for the home side when Brad Lyons who already been booked for a bad tackle was sent off after receiving his second booking of the game this time for simulation.

With St. Mirren reduced to ten men “The Wasps” started to stroke the ball around and increased their lead on 33 minutes when Kevin Cawley scored from 20 yards, a scoreline which did not flatter the visitors.

At half-time their was not much optimism within the home support but goals change games and the crucial third goal in the game did not come from the visitors. The best chance at the start of the second half came to Dario Zanatta who did brilliant on the left wing but his final shoot struck the base of the post, a goal then would have won the tie.

Alloa actually had the best chances in the match but we needed to keep it going, St. Mirren had others ideas, with nothing to lose threw everything forward. The turning point in the game came in the 67th minute when Simeon Jackson’s speculative shot was spilled by Neil Parry and substitute Cody Cooke was first to react and poked the ball home and the start of the comeback. With only five minutes St. mirren got their equaliser when Ethan Erhahon tapped home after Stephen McGinn had created the opening. If this wasn’t bad enough, two minutes later Kyle McAllister shot home the winner with a fantastic strike.

Jim Goodwin, his players and the Alloa support were gutted, this was a game they did not desreve to lose but credit to St. Mirren for keeping believing.

Prior to the defeat in the Scottish Cup, “The Wasps” had went six games undefeated, but now face games against the top two teams in the SPFL Championship in the next fortnight which will be very difficult and far more important. We need to concentrate on gaining more league points to carry on our fantastic season, but make no mistake we went to Paisley believing we could win! 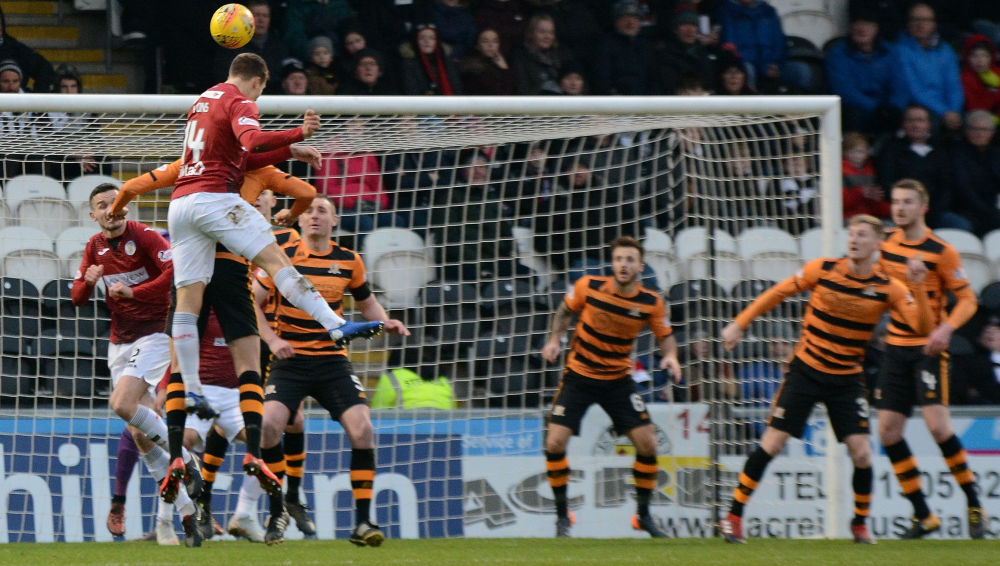 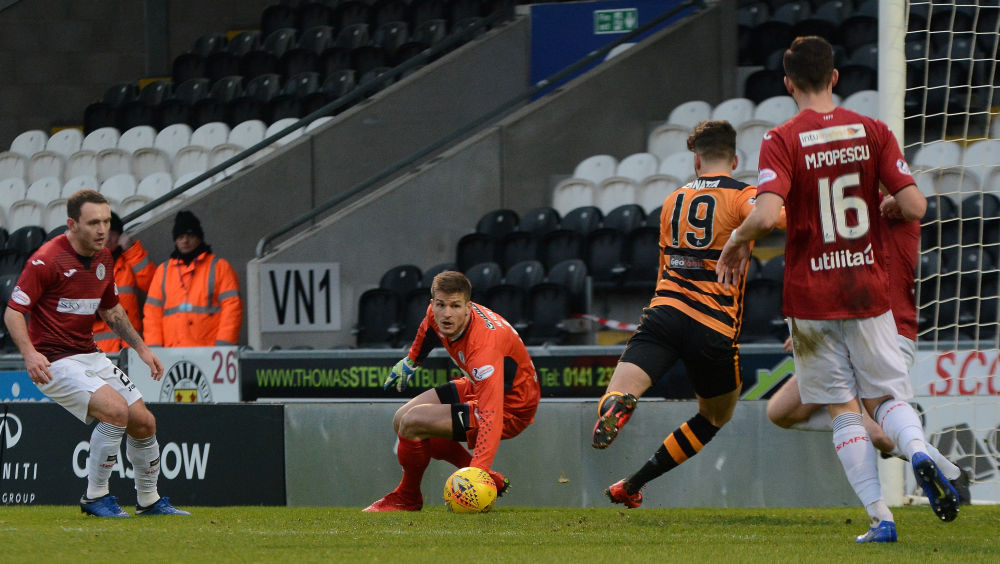 Dario Zanatta effort blocked by Jack Baird on the line 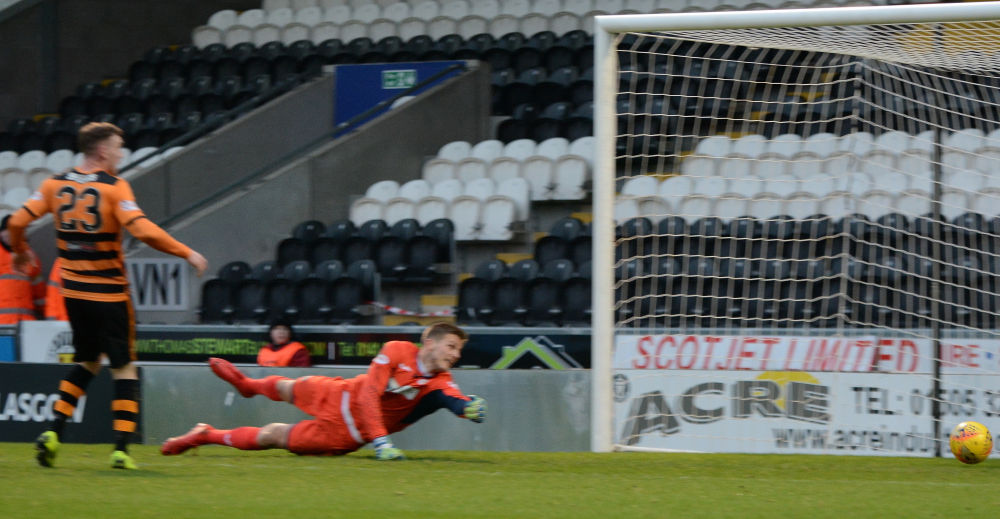 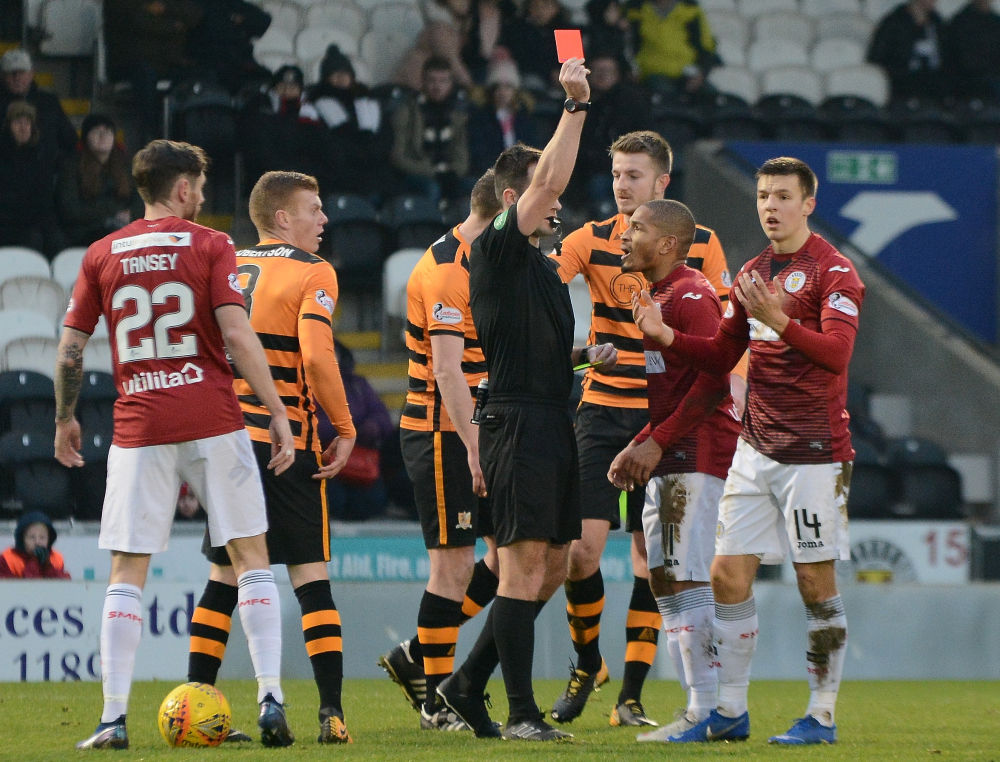 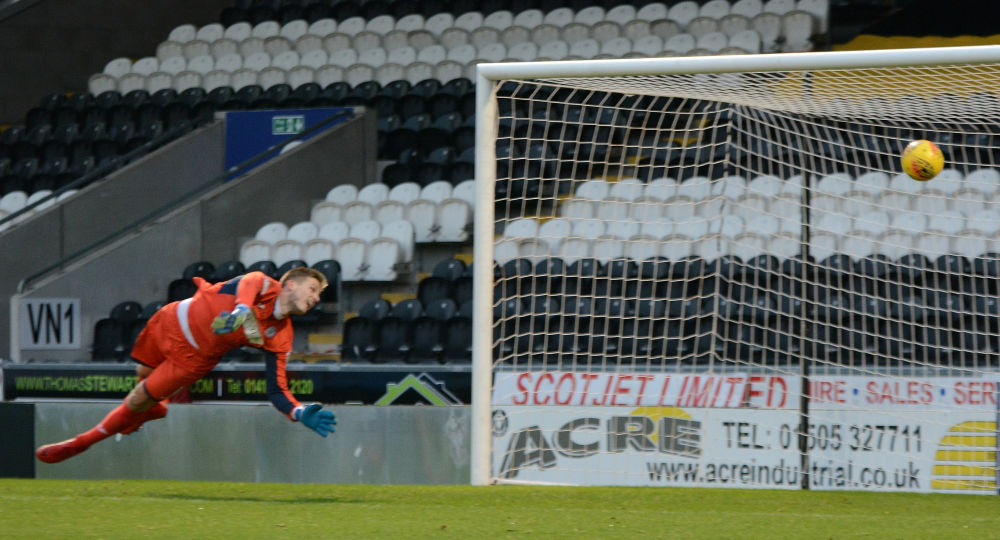 Kevin Cawley makes it 2-0 to "The Wasps" 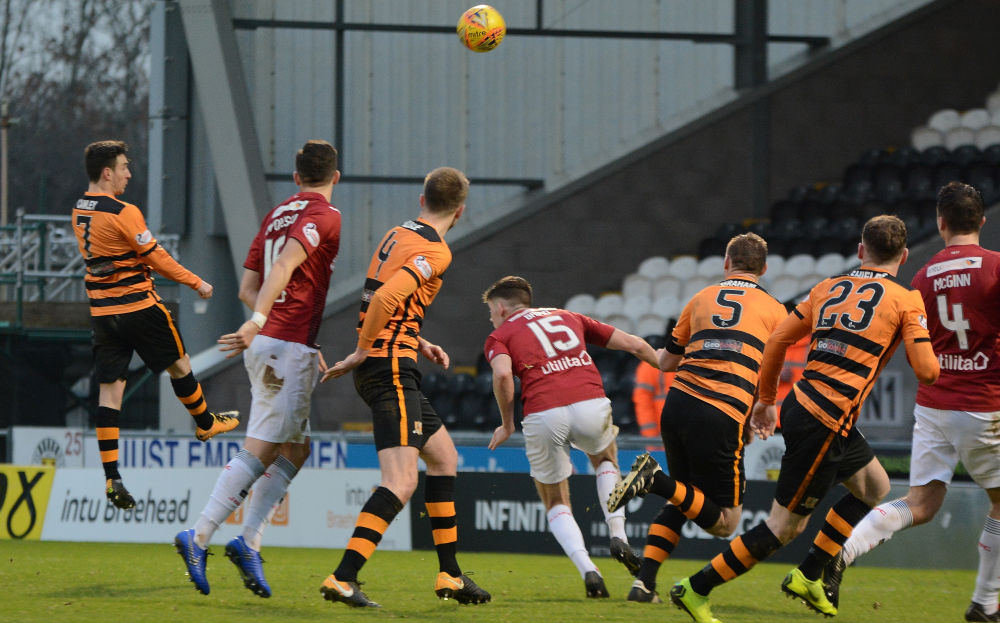 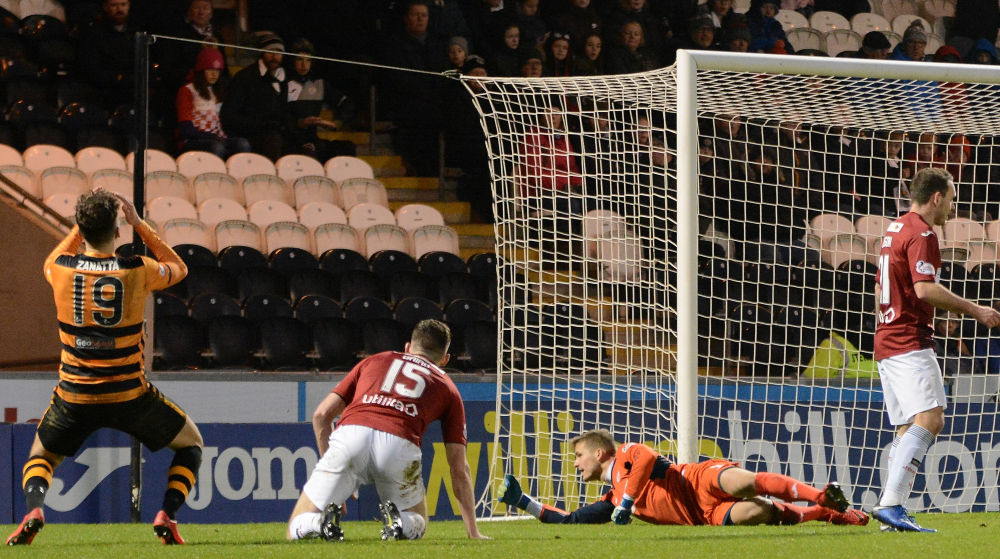 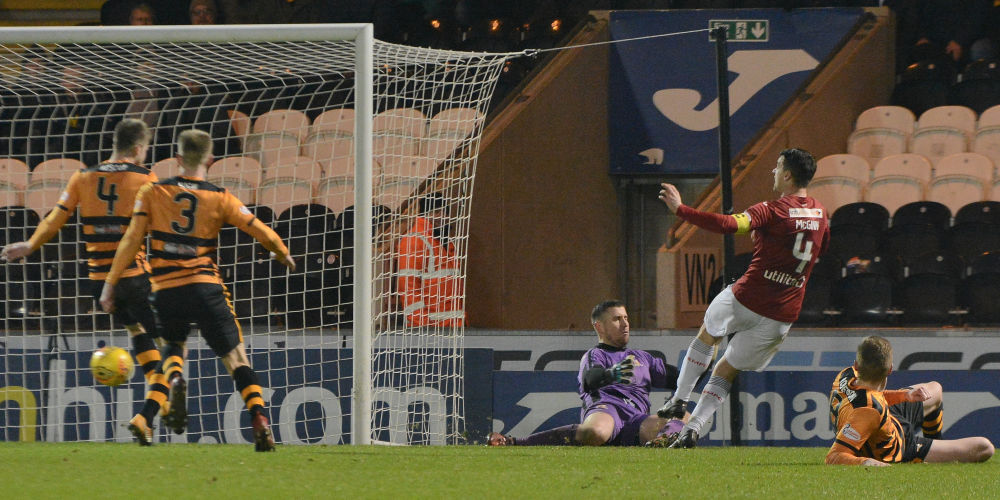 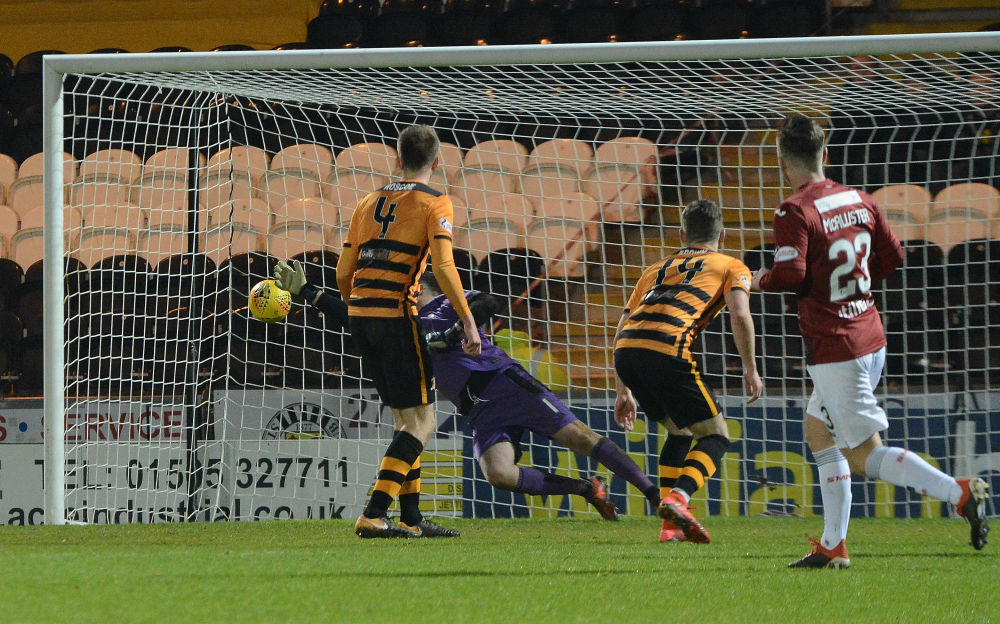 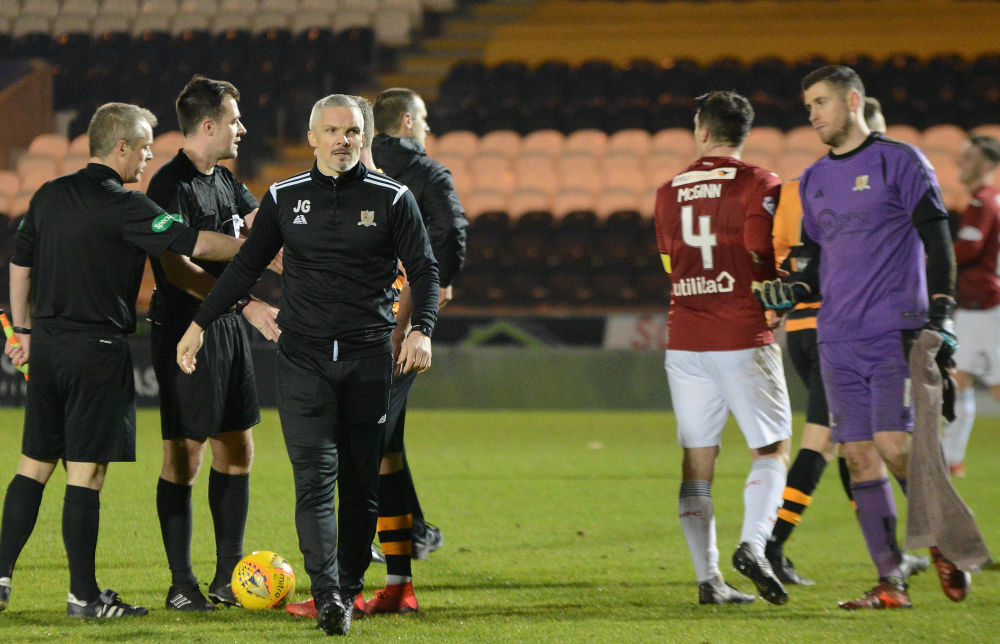 I’m feeling gutted after that, I thought the boys were excellent in the first half, everything went as planned on what we had worked on and I couldn’t have been any happier at half-time. The second half I think I’ve tried to be too clever at half-time, I tried to change our tactics a wee bit, we knew St. Mirren would commit a lot of bodies forward and I felt we could hit them on the counter attack. It didn’t work out as we had hoped, I’ve enjoyed a lot of good plaudits in the last two or three months but today I need to take responsibility for that in the second half.

Goals change games obviously but in hindsight I look at it now and think just keep doing what you are doing, I tried to be too clever at half-time, I knew they would commit bodies forward they were as well losing 5-0 as 2-0, but we needed to be a bit more patient on the ball and invited them out we might have exploited the space in behind with Kevin, Connor & Dario but it didn’t pan out as I had hoped.

The boys are a great bunch anything I ask them to do they do it and I had said to them before the game let’s not come here and not give a good account of ourselves and I think they done that in the first half, we deserved to be in front, we worked their keeper quite a bit in the first half and everything went according to plan. As I said I have enjoyed some good press recently and the players did what I asked them to do at half-time unfortunately it hasn’t worked and I have to take responsibility as manager.

Yes there was an error for their first goal getting back into the game but Neil Parry is one of the best keepers outside the Premier League I think, it was just one of them moments, he had not had a lot to do probably just a wee lapse of concentration and St. Mirren were the first players to react and that allowed St. Mirren to get their noses up a wee bit, but we could do a lot better with the goals we lost. We knew Kyle McAllister would like to come inside on his left foot, he plays a great ball to McGinn leaving a tap in and the winning goal, again we need to force him down the outside but it was a great strike from Kyle, so full credit to St. Mirren for not throwing the towel in and I have no doubt Oran will be very proud of his players but it will take me a few days to get over this result for sure.

You have to learn but it is an expensive one and a costly one, I’ve been quite lucky up till now in terms of the majority of the decisions I have made, they have been the right ones and good ones – but in my head at half-time I just felt that St. Mirren would commit a number of bodies forward, which they did, I just think we didn’t hit them well enough on the break, I don’t think we put enough passes together and we were probably a little complacent in possession but it goes back to the message I gave the players and the message I gave to the players at half-time was the wrong one, so I am disappointed in myself for that.