Another good performance from “The Wasps” especially in the second half where they bossed the game, 2-1 scoreline makes game look far closer than was, Morton only came into game in a last five minute flurry at end of game, a well deserved victory albeit a bizzare winning goal.

Now the tenth time “The Wasps” have come back from going behind this season and extends their unbeaten run to six games going back to losing last minute goal to Ross County on 1st December, 2018.

Against the run of play in the first half Morton took the lead and it was that man Chris Millar scoring his 4th goal of the season, 3 in the league all against Alloa. The biggest talking point of first half was just before half-time when Morton keeper Ryan Scully punched Alan Trouten in the box but no penalty given.

It had been a frustrating first half for “The Wasps” and again it took a goal against us and half-time talk from manager Jim Goodwin to turn the game back in Alloa’s favour. Alloa equalised from the spot in 66th minute after Ryan Scully had brought down Alan Trouten and he slotted home his fifth penalty from open play this season his 9th in succession he has scored for “The Wasps” including penalty shoot outs in Betfred & Irn Bru Cups.

“The Wasps” winning goal was bizarre, Andy Graham’s headed across goal and Rory McKeown tried to clear, his clearance struck Dario Zanatta and spun towards the goal, where Kerr Waddell then sliced his clearance into the net for an own goal.

After this Alloa had two great chances to increase their margin as they caught Morton on the break, substitute Greig Spence being in great position and just after this was blocked Iain Flannigan’s net bound shot was saved by Ryan Scully. 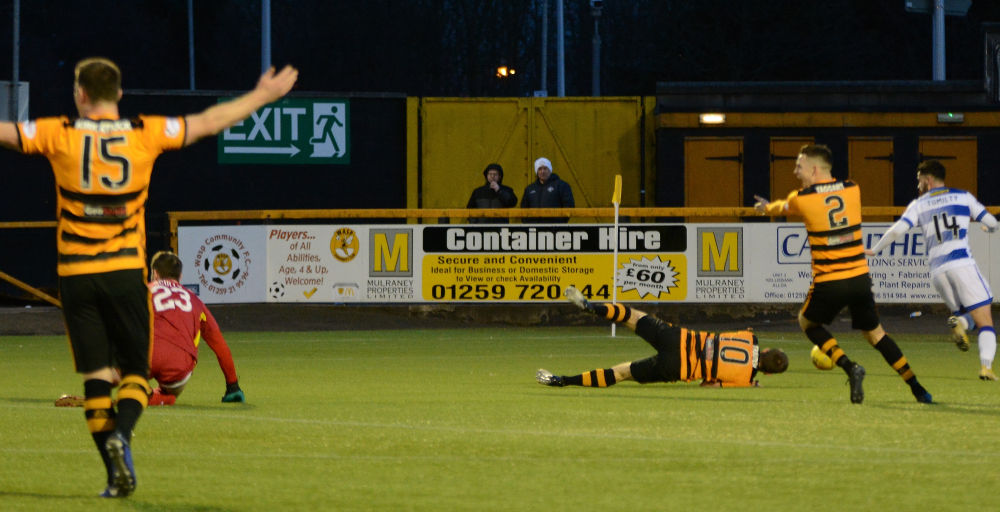 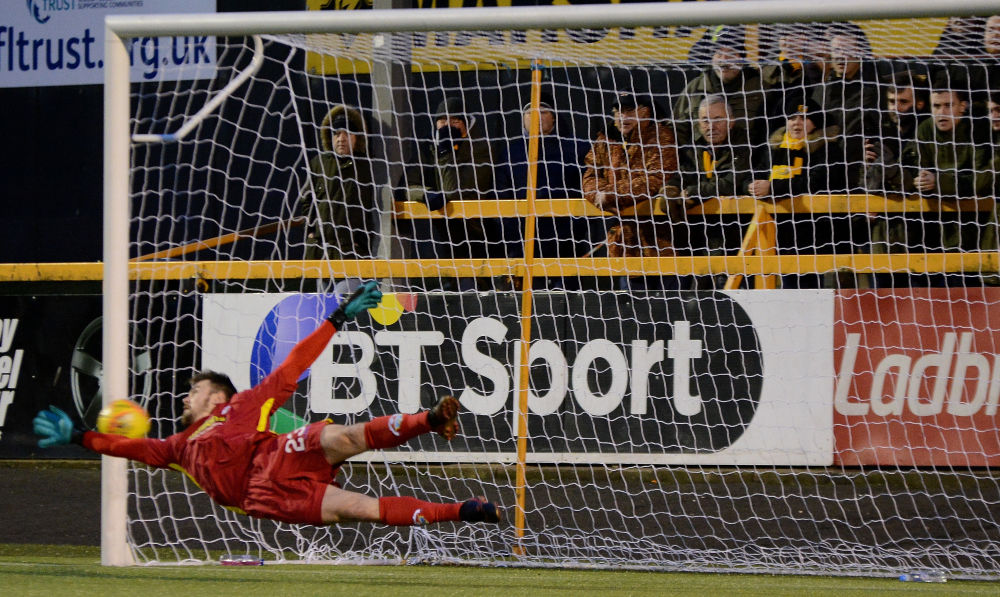 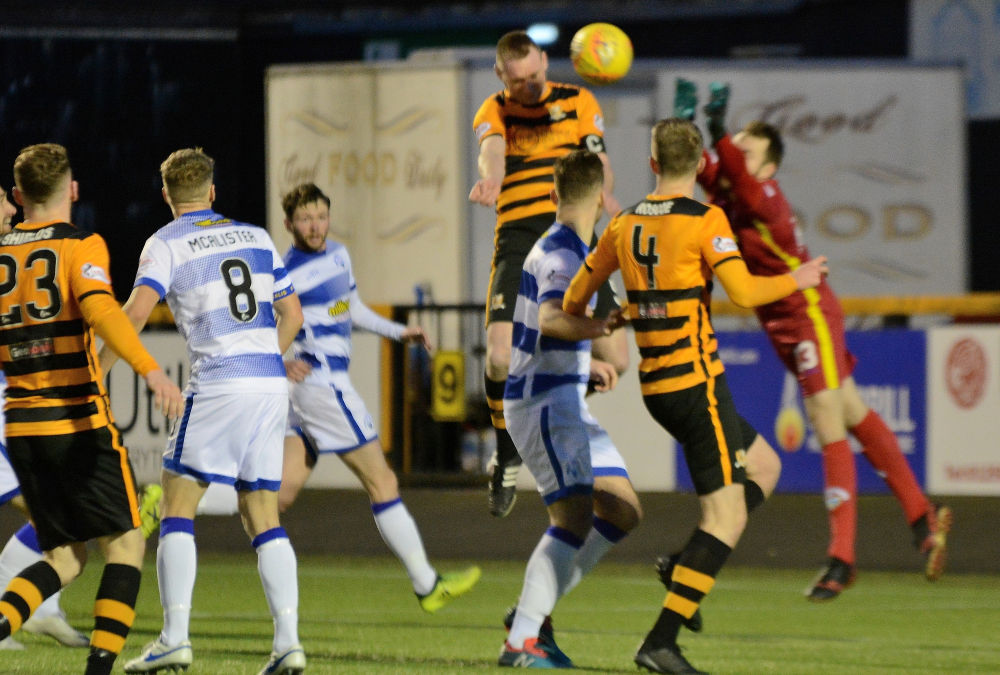 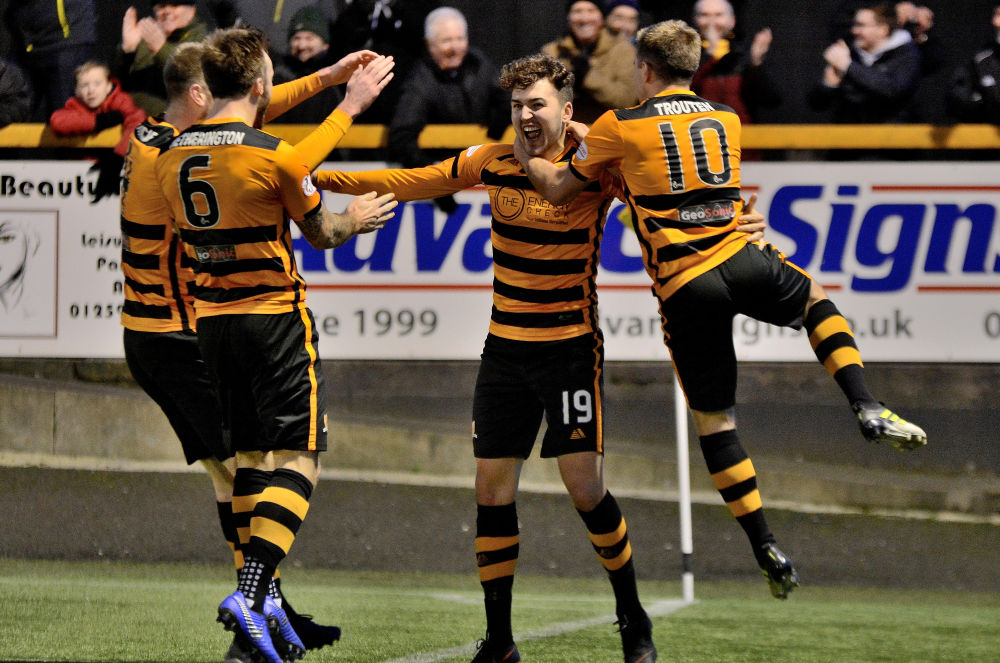 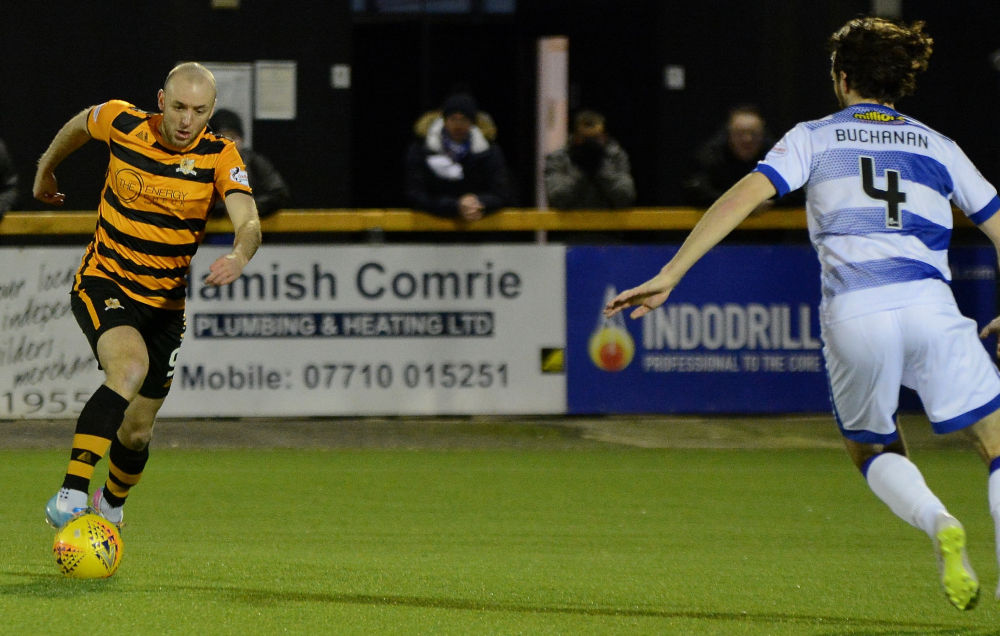 Delighted to get the win but I was really frustrated in the first half, I felt that Morton had one shot at goal and it ended with the ball in the back of our net, it was a scrappy goal, we didn’t compete well enough at the second ball, Chris Millar hits it well enough but I think we should have been doing better at it. So we went in at half-time very frustrated, we made a couple of tweaks to the formation and went with two up top instead of just one with Dario and played a diamond in the middle of the park and it worked well, and to the extent we spent 90% of the second half in Morton’s half of the pitch and we got our rewards.

We got the penalty obviously, Alan Trouten did brilliantly, the timing of his run, drawing the keeper and is brought down. The second goal is really fortuitous, I felt sorry for the kid, Kerr Waddell, I’ve scored plenty of own goals in my career so I know what it feels like, he obviously took his eye of the ball and sliced it into the back of the net, but we will take it no matter how it comes because I think on the whole balance of the play we deserved it to be honest and I think we should have had a stonewall penalty right on half-time as well, when Alan Trouten got completely wiped out by their goalkeeper, so justice from my point of view and I am really pleased for the players.

I was really angry at half-time and it’s the first time I have been for a long time, I am sick of giving teams a goal of a start and that’s been from the start of the season we have had to fight really hard to get any points on the board and that’s why I think we have had so many draws because we have had to come back into games which we should have won. Today I’m not going to  be too hard on the boys but next week I would like us to try and get our noses in front against St. Mirren and see how that feels.

The game at Firhill today was a massive game for both clubs and I said to the players a wee while ago let’s not worry about Partick Thistle and Falkirk, let’s just focus on ourselves and take it game by game and let’s start looking up the way, We are now only one point behind Dunfermline Athletic tonight, five behind Morton and seven points outside the Play-Offs, it would be absolute carnage if we managed to sneak into the Play-Offs, what would they do to try and stop us then! All joking aside we are just fully focused on our job which is to remain in the Championship this time next year, that is our main goal which has been since the start of the season and that still remains the case. We are not getting carried away, I said to the players to enjoy it, it was a fantastic comeback but we will come back fully focused again next week because we want to get into the next round of this season’s William Hill Scottish Cup, a great competition and we look forward to it, it’s a freebie for us St. Mirren will be massive favourites but again I fancy ourselves going there and I believe in the players and I think if we get things right on the day we can cause one of the upsets in the next round.

Six games undefeated I was conscious of the Ladbrokes Manager of the Month Award curse, people did speak about that but I am not a superstitious person, even at 1-0 down, I never really got to down because I have absolute faith in the boys, I still expected us to score, Alan Trouten now 15 goals for the season which is a fantastic return from the wee man but it is all about the team. The Manager of the Month Award is great but I said the other night it is a joint effort – great backroom staff, and you can be the best manager in the World but if the players don’t carry out your instructions then you are snookered. I accepted the award on behalf of all my staff and players and was delighted to receive it.