After the disappointment of losing on penalties in midweek “The Wasps” bounced back on Saturday at Easter Road against a very good Hibernian side who are looking to break into the top four in the Premier League this season. Manager Peter Grant made one change from midweek giving Kevin O’Hara his first competitive start for the Wasps with Liam Buchanan on the bench.

Hibernian took hold of the game in the opening twenty minutes with “The Wasps” under the cosh, however gradually Peter Grant’s team got a foothold in the game and gained confidence. Alan Trouten just couldn’t get enough on a glancing header and Kevin O’Hara was using his pace to run at the Hibernian defence.

Prior to half-time the home fans were starting to get unsettled such was the spell the visitors started to impress on their Premier League opponents, playing some great possession football and usind the full width of the park on both wings.

The turning point in the game was the opening goal, which was to see Alloa keeper Neil Parry take no further part in the game after a collison with Christian Doidge.

Young twenty year old Chris Henry had to come on from the bench to make his first team debut. Hibernian having now got their noses in front looked to have regained their belief however their clinching goal to make it 2-0 in 84 minutes Chris Henry had no chance Tom James scoring his first goal for the Edinburgh club since joining in the close season, he is unlikely to score a better goal. 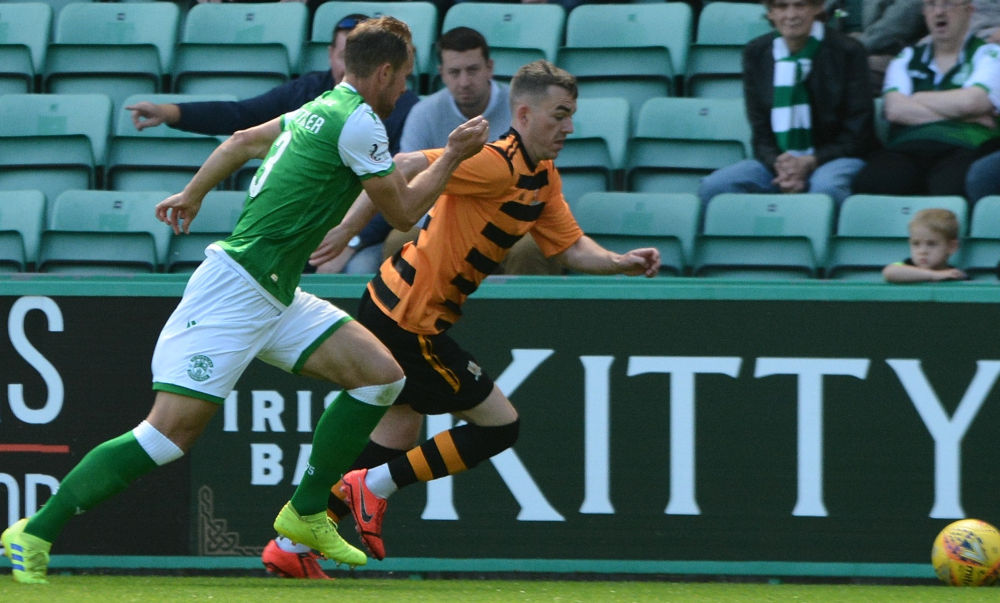 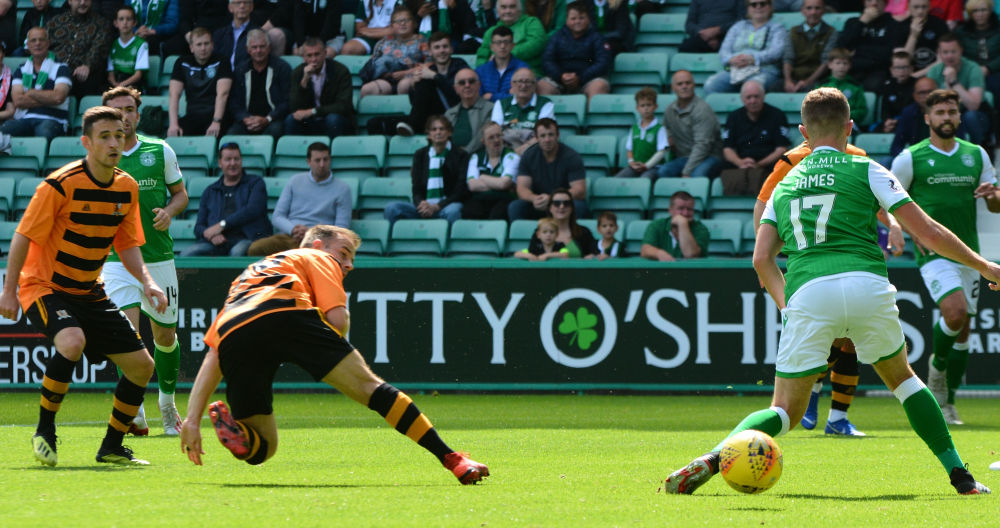 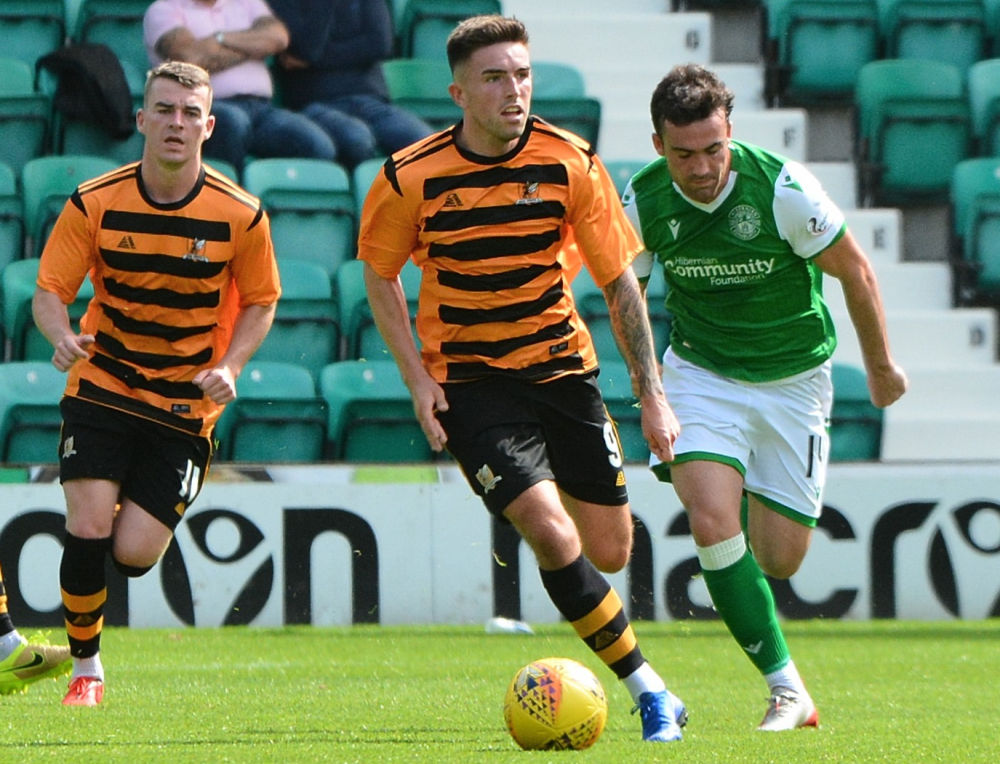 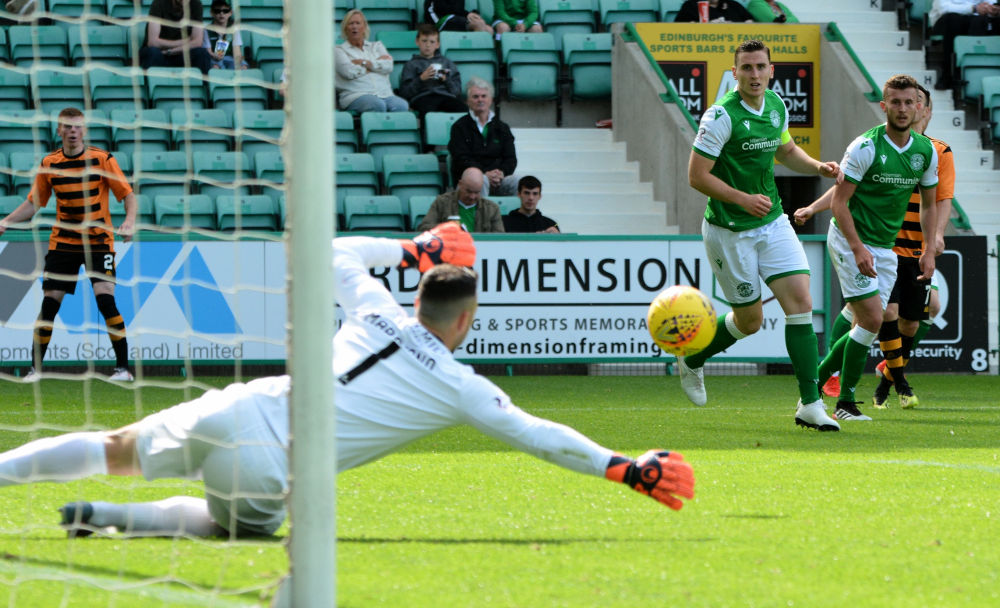 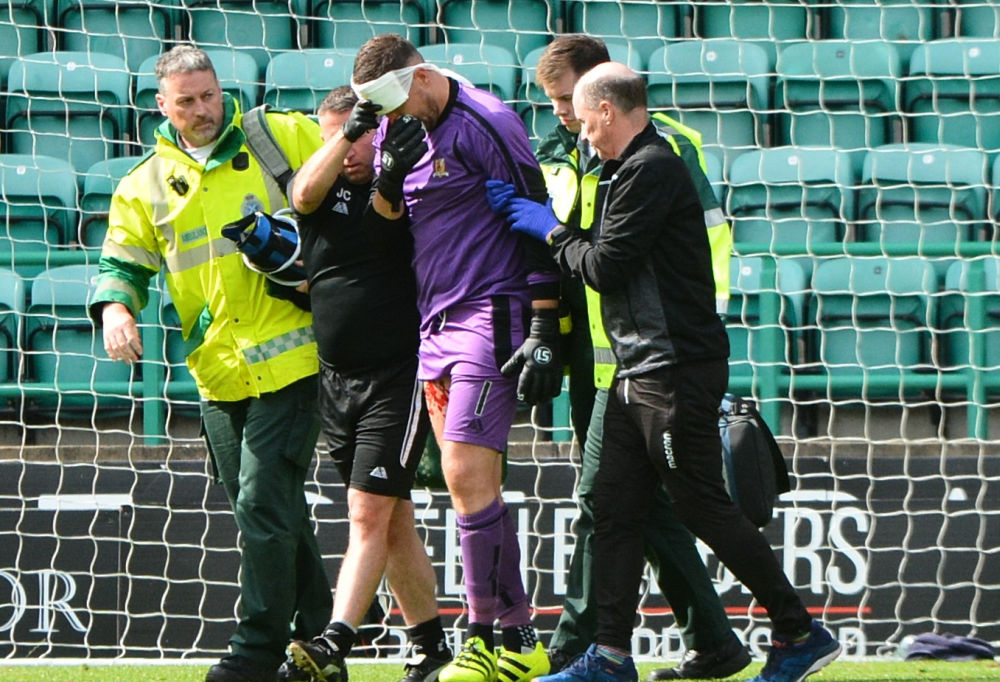 Neil Parry has to leave the field after collison 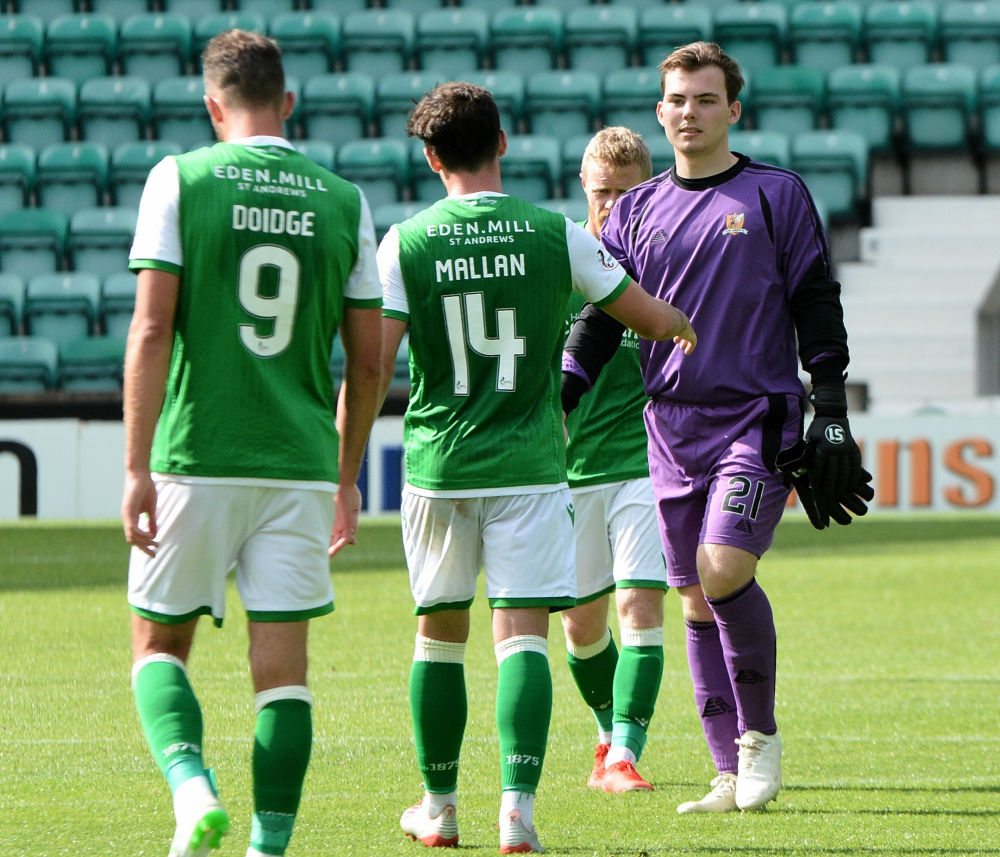 I was delighted with my team, we knocked about the ball well after starting the game a bit shaky, but the players have had a lot to take in over only one, Thursday night training session, you would like to try and fix all the things you would like at once, but Jim had left the team in good shape anyway, so all we want is getting that balance correct with wee tweets here and there which I want to add and we need to do that slowly because it is a lot of information to put in over one training session.

The first fifteen twenty minutes we were trying to find our feet but after that I was really pleased with them, disappointed again with the goals which we lost, we have to work hard for every goal which we try and score but the opposition are getting goals which I believe we could do better but we tried to take the ball to Hibernian who are a very good side and could be challenging for the top four this season.

There was a spell in the first half when the home fans were getting on their teams back, which is an indication of what we were doing, while we had the ball the opposition couldn’t do anything although at times there was a couple of times we turned and went back the way when I think we could have gone forward and created more. We started with Kevin O’Hara who is different to some of the boys we have here, we have good players and we must trust them to play in that way. We need to defend as a group better at times, but all round I was really happy with our performance, we will not be facing a team of that quality every week and that’s the thing we need to be ready when the league games come around. We will use the next few games but suffered a couple of injuries today which is not great having such a small squad, I will look at that over the next few days and will be looking to add to the squad before the league games begin which is our main focus.

Neil Parry took a bad injury, he is going to hospital just now but they are talking about him possibly needing plastic surgery and stitches which is not ideal but he was brave to come at the opportunity and it was a complete accident so we have no problems with that we just have to deal with it and maybe make him a little nicer looking! It was a combination of injuries, his nose was bleeding, he has a scar on the top of his head and that’s the concern because the wound is too wide and that’s why he might need plastic surgery but he is a strong boy and a willing boy but he has went straight to the hospital.

I was delighted with Kevin O’Hara in his first start, he is a boy I have known for a long time as he played with my son at Falkirk and he played really well there, he just went off the radar for a little bit, as soon as I got the job I thought we needed someone a little bit different and I think Kevin can give us that, I want to look at him as a striker, I think that is his position although a lot of people have played him wide due to his pace, but I want to play him as a striker and get his mojo back and want him to score goals, I know he is more than capable of and if he is successful Alloa will be successful and that is why he is here, it is a big challenge for him, and great credit to him it is the first time he has went part-time, he did have an opportunity to stay full-time but decided to come to us so I it is up to him to push on and show the player he can be.

We are looking to strengthen the side there are some areas we are weak and if we got an injury we would be struggling but we have to be careful we don’t have the opportunity to bring in a player at any time that’s not the case anymore and we don’t have the finances to have a massive squad  so if we are bringing any players in they have to be the right ones and although I have been recommended other players in fairness to the current squad having watched some of the players offered they are no better or not to the standard we already have at the club, we have good players at this club, so I will not be bringing in players for the sake of it they would have to offer something different or be better. One thing I knew I had was a group of footballers that will all fight for each other, they are talented boys with the ball at their feet, they want to play the game in the right manner but the bottom line is we want to win football matches, we don’t want to be nice and pretty and lose, we want to have a cutting edge and I think we can add to that and get better and not lose silly goals, I have a lot to work with but for effort and commitment I couldn’t fault my players.